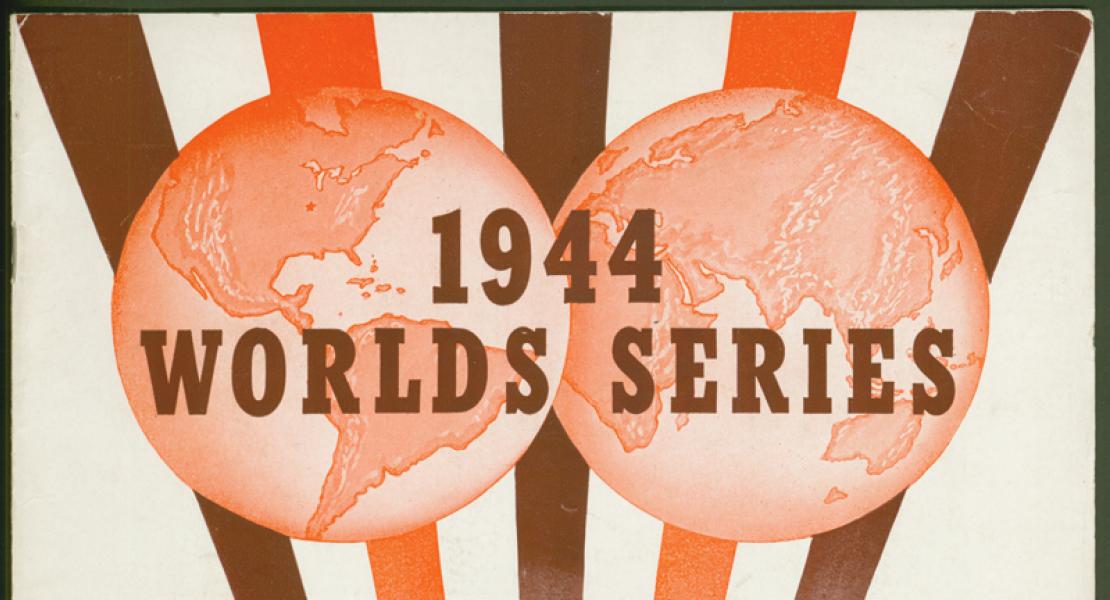 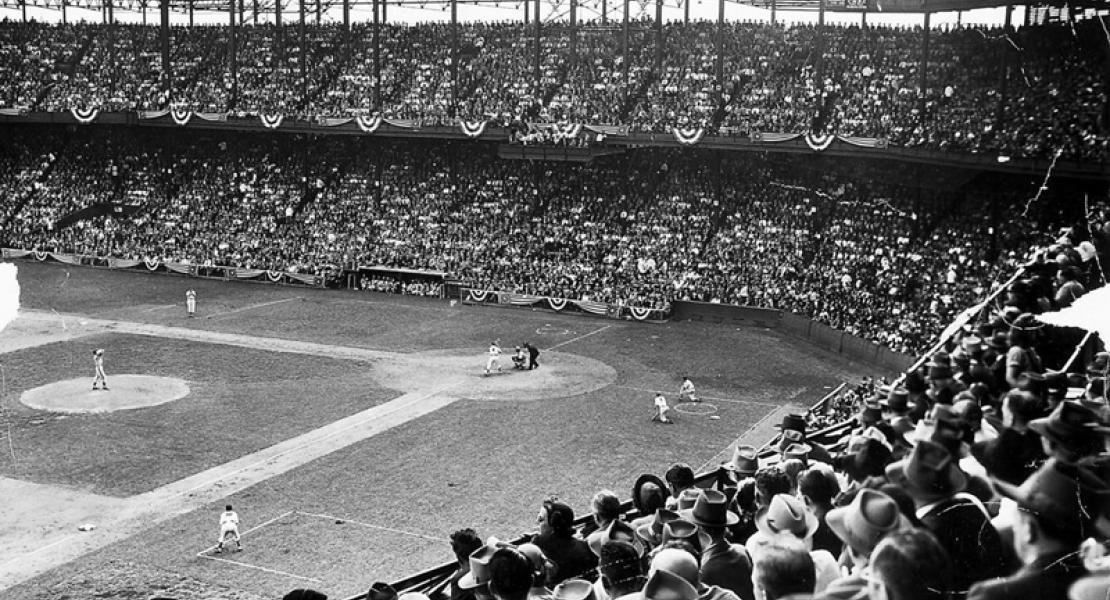 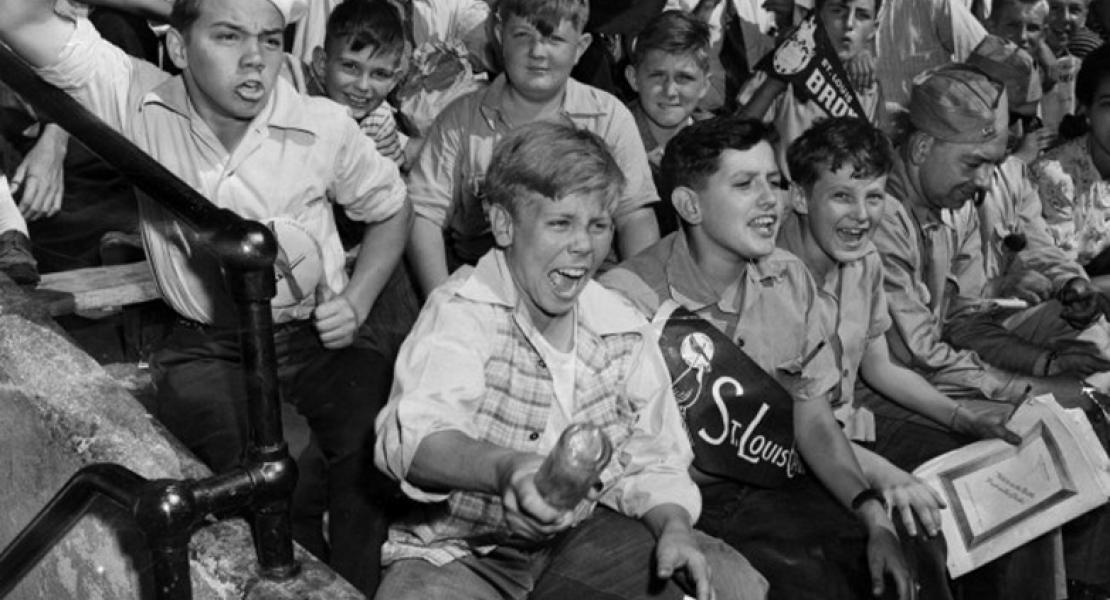 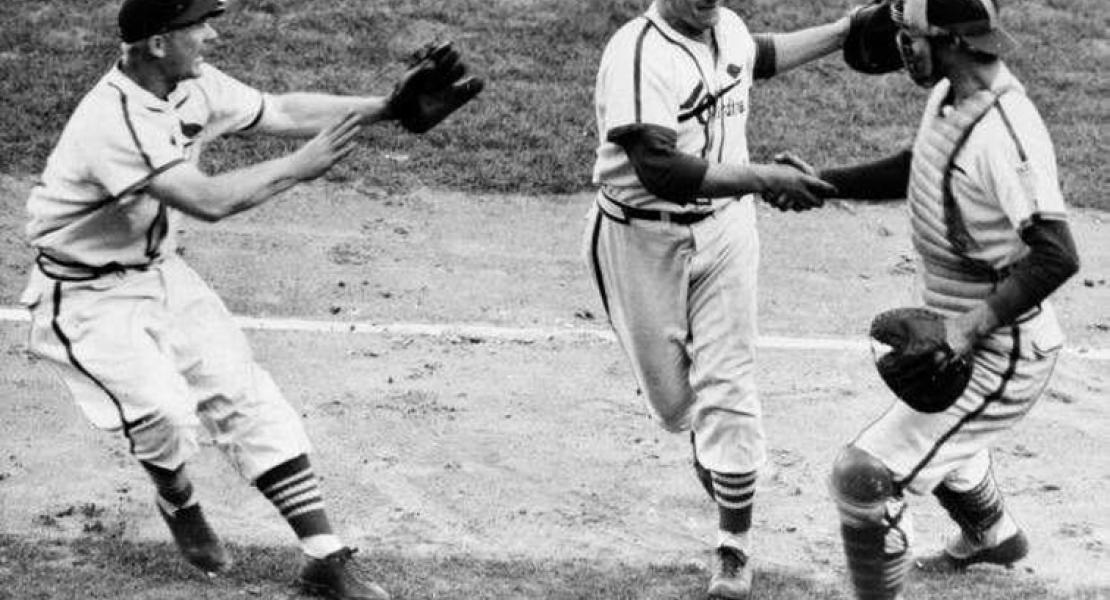 The 1944 World Series was the first played entirely west of the Mississippi River. St. Louis, then the westernmost outpost of Major League Baseball, hosted the series between the National League champion St. Louis Cardinals and the American League champion St. Louis Browns. All games were played at Sportsman’s Park, home to both teams. The Browns had won their first-ever league pennant on the final day of the regular season, finishing with a record of 89–65, one game better than the Detroit Tigers. The Cardinals had won their third consecutive pennant, topping 100 wins for the third straight season and coasting to the title by fourteen and a half games.

The all–St. Louis matchup posed a dilemma for the opposing managers, Billy Southworth of the Cardinals and Luke Sewell of the Browns. Due to wartime housing shortages in St. Louis, the managers and their families were sharing an apartment at Lindell Towers. With both teams playing home games at Sportsman’s Park, the Cardinals and Browns—and their managers—could never be at home at the same time. When the Cardinals were in town, Sewell’s wife and teenage daughters vacated their Lindell Towers home for Dayton, Ohio, where the Sewells lived in the off-season; when the Browns were in town, Southworth’s wife and nine-year-old daughter returned to Columbus, Ohio, where the Southworths lived in the off-season. The arrangement worked flawlessly until both teams made it to the World Series (the Cardinals and Browns did not face each other during the regular season, as such interleague play would not begin until 1997). Sewell won a coin toss for the apartment, but another resident of Lindell Towers who was out of town loaned his apartment to the Southworths during the World Series so that they would have a place to stay.

After the 1942 season, World War II had depleted major-league rosters as ballplayers were called into military service. Although the 1944 Cardinals were missing star right fielder Enos “Country” Slaughter, second baseman Jimmy Brown, and pitchers Johnny Beazley, Howie Pollet, and Ernie White from their 1942 championship team that had won a franchise-record 106 games, they were not as hard-hit as most clubs. Thanks to draft deferments, they retained eight key players from the 1942 team, including outfielder Stan Musial, who led the 1944 Cardinals with a .347 batting average; pitcher Mort Cooper, who topped the pitching staff with 22 wins; and shortstop Marty Marion, who won the National League’s Most Valuable Player award by spearheading a defense that established a league record for fielding percentage. In contrast, the Browns, rather than relying upon key components of a previous championship club, had cobbled together a winning team from available spare parts.

Thus the underdog Browns, who had outdrawn their cross-town rivals in attendance for the first time since 1925, enjoyed the sentimental support of many St. Louis fans over the heavily favored Cardinals. For the first half of the “Streetcar Series” (so named because with two teams from the same city, travel needs could be met by city streetcars rather than trains), the Browns held the upper hand. Sewell made a surprising pitching choice of Denny Galehouse, just 9–10 in the regular season, to start the opening game against Cardinals’ ace Mort Cooper. Cooper held the Browns hitless until the fourth inning, when Browns’ right fielder Gene Moore singled with two out. George McQuinn, the Browns’ first baseman who would lead all hitters in the series with a .438 average, followed with a two-run homer onto the roof of the right-field pavilion. They were the only hits allowed by Cooper, but no more were needed as Galehouse shut out the Cardinals until finally allowing one run in the ninth inning. The Cardinals escaped with a 3–2 win the next day, but only because three errors by the Browns allowed two unearned runs against their top pitcher—Nelson Potter, a 19-game winner who had been suspended for ten days in the regular season for throwing illegal spitballs—which sent the game into extra innings. Potter committed two of the errors himself on a bunt by Cardinals’ pitcher Max Lanier. The Browns bounced back in Game Three with a 6–2 triumph behind their 17-game winner, Jack Kramer.

The turning point for the series came early in the fourth game. In the top of the first inning, with one out and Cardinals’ center fielder Johnny Hopp on base after hitting an infield single, Musial walloped a pitch from Sig Jakucki for a two-run homer over the right-field pavilion. Harry “The Cat” Brecheen, a left-handed pitcher who had moved up from the Cardinals’ farm system due to wartime absences and posted a 16–5 record in the regular season, made those runs stand up in a 5–1 win that evened the series. The fifth game featured another pitching duel between Galehouse and Cooper, but Cooper got the best of Galehouse this time, with the Cardinals winning 2–0 on home runs by first baseman Ray Sanders and left fielder Danny Litwhiler. Lanier, another left-handed pitcher who had won 17 games in the regular season, clinched the World Series title with a 3–1 win over Potter in the sixth game. The margin of difference came in the Cardinals’ three-run fourth, when an error by Browns’ shortstop Vern Stephens prolonged the inning, allowing Cardinals’ second baseman Emil Verban and Lanier to drive in two unearned runs.

In the end, the Cardinals did not prevail solely because of holdovers from their 1942 club. The Browns had holdovers as well, including McQuinn, their best player in the series, and while Hopp, Musial, Marion, Cooper, Sanders, and Lanier remained from the Cardinals’ 1942 champions, Brecheen, Litwhiler, and Verban were wartime replacements. The biggest difference in the 1944 World Series was defense. The Cardinals committed only one inconsequential error, compared to ten by the Browns, including crucial mistakes that cost them the second game and provided the margin of difference in the sixth. In contrast to the elation of upsetting the mighty New York Yankees in the 1942 World Series, the Cardinals reacted to winning the “Streetcar Series” more with a sense of relief. As Marion explained, “We thought we were just going to walk through them. Who in hell’s the Browns, you know. By the time we got in that first game, we found out they were a pretty good ball club. . . . We had a hell of a time beating those boys. They were tough. . . . If the Browns had [beaten] us that would have been really a disgrace.”

It was the only World Series appearance for the St. Louis Browns, who moved to Baltimore in 1954 and became the Orioles. Remaining in St. Louis, the Cardinals went on to another World Series championship in 1946 after the war ended and major-league rosters were replenished, then added more pennants and World Series victories in the 1960s, 1980s, and into the twenty-first century. Yet no National League club, including the Cardinals themselves, has won three consecutive pennants since the 1942–1944 teams managed by Hall of Famer Southworth.

Heidenry, John, and Brett Topol. Boys Who Were Left Behind: The 1944 World Series between the Hapless St. Louis Browns and the Legendary St. Louis Cardinals. Lincoln: University of Nebraska Press, 2006.

Mead, William B. Even the Browns: The Zany, True Story of Baseball in the Early Forties. Chicago: Contemporary Books, 1978.