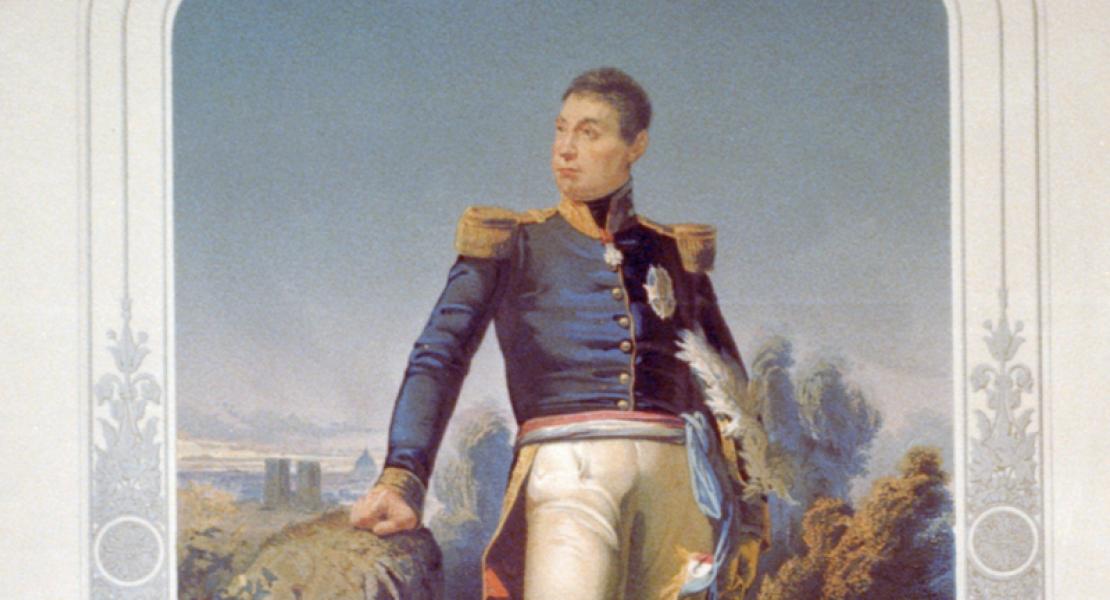 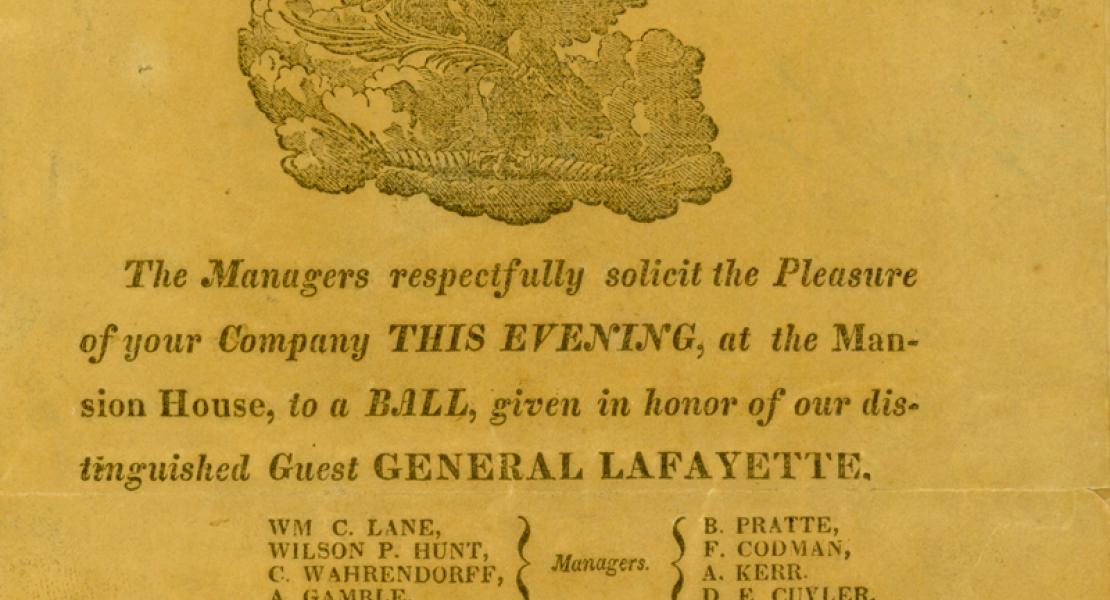 In 1824–1825, the Marquis de Lafayette, famous veteran of the Revolutionary War, returned to America to make a grand tour of the country he fought to create. The fifteen-month tour sparked nationwide festivities: parades, balls, and banquets. Everywhere Lafayette stopped he was hailed a hero. The western part of his journey across the United States ended in St. Louis, where city leaders threw a grand celebration in his honor.

Marie Joseph Paul Yves Roch Gilbert du Motier, Marquis de Lafayette, was only nineteen years old when he left his native France to join George Washington’s army and fight for America’s independence. The French aristocrat, known then and now simply as Lafayette, quickly distinguished himself for bravery and resolve on the battlefield. Lafayette became one of George Washington’s most trusted advisers, and Washington thought of Lafayette as a son. Thomas Jefferson and Alexander Hamilton considered him a treasured friend. Lafayette was a brilliant officer and commanded forces during the decisive American victory at Yorktown, Virginia, in 1781. After the war, he returned home to France.

In 1824, at the invitation of President James Monroe and to commemorate the upcoming fiftieth anniversary of the American Revolution, Lafayette returned to America to make a grand tour of all twenty-four states in the Union. His travels ran from July 1824 to September 1825. In every place he visited, hundreds and hundreds of people welcomed him, organizing parades, balls, and other public festivities in his honor. Lafayette traveled with his only son, named George Washington Lafayette. Lafayette also brought a personal secretary, Auguste Levasseur, who kept notes of the tour. Levasseur’s journal was published in 1829 and titled Lafayette in America in 1824 and 1825, or, Journal of a Voyage to the United States.

St. Louis, in the newly formed state of Missouri, was the westernmost stop on Lafayette’s nationwide tour. Around twelve thousand people lived in the city at the time. In the 1820s St. Louis was the principal stopping-off point for migrants heading west, and most easterners still thought of it as a frontier town. Many leaders trying to build up the reputation of St. Louis saw the visit of Lafayette as a great opportunity to showcase the sophistication of their city. Others opposed using public funds to subsidize a celebration for Lafayette. The governor, Frederick Bates, declined to offer any state support for the events in St. Louis, so it fell to city leaders to raise funds for the festivities.

Lafayette, who was only in St. Louis for one day, arrived on board a steamboat called the Natchez at about nine o’clock in the morning on April 29, 1825. He was escorted onto shore by the famous explorer William Clark, US Senator from Missouri Thomas Hart Benton, and Illinois Governor Edward Coles, among other prominent men from Illinois and Missouri. Lafayette rode into town in a four-horse carriage at the front of a large parade, accompanied by Mayor William Carr Lane and Auguste Chouteau, who had helped found St. Louis more than six decades earlier. The whole town turned out to see the hero-celebrity.

Pierre Chouteau hosted a lunch for local dignitaries. A public reception followed the private lunch. Anyone in town wishing to meet Lafayette was welcome to come and greet him. Lafayette was especially pleased to see in the crowd William Stephen Hamilton, the son of his old friend Alexander Hamilton.

Local leaders took Lafayette on a tour of St. Louis, showing off the city’s thriving commerce. William Clark led them through his collection of “Indian curiosities”—a museum of artifacts he had gathered during his western explorations. The Europeans were fascinated by necklaces made of grizzly bear claws, and Clark gave Lafayette a buffalo-skin coat to take with him and later shipped him a young grizzly bear, which Lafayette wisely donated to a Paris zoo. Lafayette wanted to stay longer with Clark, but his St. Louis hosts had other events planned and hurried him along. The group also saw the Indian mounds, which were later demolished (the site of Big Mound was near the present-day Stan Musial Bridge). “This city,” Levasseur concluded, “has the prospect of a brilliant destiny in these vast regions, in the midst of which civilization, under the guidance of American liberty and industry, must run a giant’s course.”

On the night of April 29, St. Louisans gathered for a lavish public ball in honor of Lafayette at the Mansion House Hotel. It was the largest ball that had ever been held in St. Louis, and people celebrated until after midnight. Organizers managed to impress their French visitors—at least somewhat. The welcoming and elegant events, Levasseur wrote, “made us completely forget that we were on the confines of a wilderness.”

Lafayette spent the night on the Natchez and departed the next morning, sent off by a large crowd of admirers. On his journey back east, Lafayette visited other “western” cities including Louisville, Lexington, and Cincinnati. His tour ended in Washington, DC, in the fall of 1825, where leaders from across the country celebrated Lafayette’s sixty-eighth birthday. He returned to France, where he died nine years later.

Lorri Glover is the John Francis Bannon Endowed Chair in the Department of History at Saint Louis University.