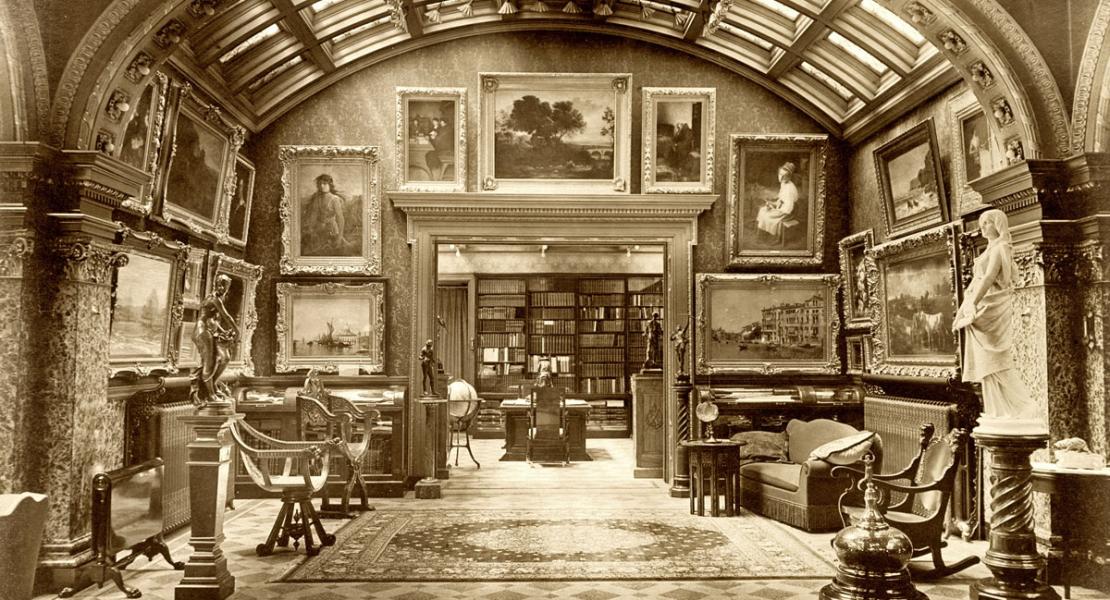 One of the key St. Louis businessmen and philanthropists of his generation in St. Louis, William K. Bixby left a legacy in connoisseurship by gathering an important collection of art, rare books, and literary and historical manuscripts on a scale that has seldom been equaled in the United States. Born in Adrian, Michigan, on January 2, 1857, the son of Alonzo and Emma Louise Bixby, William was reared in a household that respected the great passions of his family: history and art.

As a young man, this cultural appreciation was temporarily held in check as Bixby made his way in life. He began work as a newspaperman in his hometown. Next, he became a bank clerk in Detroit, without pay, in order, as he put it, to make his way in the world of business and finance, learning from the ground up numerous procedures and practices that he would find useful in his subsequent career. His formal schooling ended with a high school degree, and he went to work in Texas in various capacities such as watchman, freight clerk, and baggage man for the International and Great Northern Railroad. He thus began to “make his own place” in the business world, barely out of his teens, as one newspaper put it, initially earning the humble sum of fifty dollars per month. From this time onward, Bixby’s business career would be associated with railroading and rail parts manufacturing.

By the early 1880s, after working briefly for the Missouri Pacific Railroad, Bixby became the printing and stationary agent for the entire Jay Gould system. He then became a lumber agent for the Missouri Car and Foundry Company of St. Louis, later advancing to purchasing agent, treasurer, vice president, general manager, and ultimately president of what eventually evolved into the American Car and Foundry Company.

In the business of railroad-car building in Missouri, Bixby increased his company’s stock through mergers and acquisitions. So successful were his financial decisions that he retired in 1905 from an active role in the railroad business. Yet he continued to be involved in such companies as the Laclede Gas and Light Company and various St. Louis banking concerns, as well as the Wabash Railroad.

By midlife Bixby had thus acquired the means to embark upon a second career in collecting art, rare books, and artifacts. These endeavors occupied him for the rest of his days. Bixby channeled his wealth and collecting genius into the development of the budding educational and cultural institutions of St. Louis. His impact on their future was perhaps more far-reaching than that of any other St. Louisan of his time.

In the later decades of his life, Bixby held the presidency of Washington University, succeeding Robert Brookings. He was also president of the City Art Museum of St. Louis and a trustee of the St. Louis Public Library. He endowed, either through gifts of rare books, art objects, or financial assistance, the School of Fine Arts and the libraries at Washington University, the Missouri Historical Society, the Mercantile Library, the St. Louis Academy of Science, and the St. Louis Artists’ Guild. Bixby served on the board of directors of the Louisiana Purchase Exposition and the Commission on Fine Arts. Often, as in the case of the City Art Museum, the Missouri Historical Society, or the Washington University School of Fine Arts, his participation became instrumental in securing permanent structures to house collections and programs.

Bixby was known far beyond the bounds of Missouri as an international collector of manuscript Americana and literary manuscripts of the world classics. Both Washington University and the Missouri Historical Society benefited from this prodigious collecting. He gave the historical society a large collection of Lincoln and Washington correspondence as well as the largest collection of Thomas Jefferson letters amassed privately up to that time.

One of the most interesting features of Bixby’s book- and manuscript-collecting genius was his privately funded publishing program for works he had acquired. He often created highly useful first printings of original correspondence and disseminated them to libraries nationwide. In this way he produced and distributed the famous Journal of Major John André, Alexander Hamilton’s Itinerarium, and the Private Journal of Aaron Burr. Bixby also published works of local Missouri interest such as Grant in St. Louis, by Walter Stevens, and The Brown-Reynolds Duel: A Complete Documentary of the Last Bloodshed under the Code between St. Louisans. He also published various poems of Eugene Field in elaborately illustrated editions.

Bixby’s library became huge. Through a series of great sales at auction, he helped place many important rarities in the hands of other collectors whose libraries formed the nuclei for several noted research libraries. He associated with Henry E. Huntington, founder of the Huntington Library in San Marino, California; A. S. W. Rosenback, the famed bookseller; and other bibliophiles of his time. Before dispersal, Bixby’s collections held a staggering array of American, British, and French literary manuscripts, literary first editions, and early printings of classic American works, including the double elephant folio of John James Audubon’s Birds of America. He possessed other noted works ranging from the letters of Lord Byron or Samuel Taylor Coleridge to manuscripts by Davy Crockett, the war correspondence of Ulysses S. Grant, and a most extensive collection of letters by Nathaniel Hawthorne.

Virtually all the newly developing bibliographical organizations of a century past—from the Bibliographical Society of America to the Grolier Club, the Bibliophile Society (for which he published numerous works), and the Club of Odd Volumes in Boston—counted Bixby among their strongest friends and supporters. In St. Louis, Bixby aided the Franklin Club, which exhibited collections based on his research; the Round Table, an organization of civic leaders; and the Burns Club. He also was a supporter of the American Red Cross.

St. Louisans long appreciated Bixby’s role as a great cultural benefactor to their city. He was considered the guiding spirit for the city’s art museums, libraries, and universities in the early years of the twentieth century. At his death on October 29, 1931, St. Louis poured out its respect to one of its first citizens. The City Art Museum closed at noon on the day of the funeral, and the west wing of the Jefferson Memorial closed for a day. There were 180 honorary pallbearers, including August A. Busch, W. H. Danforth, John H. Olin, John Joseph Glennon, Motion May, and Edward Mallinckrodt, a final testament to the civic leadership Bixby had inspired.