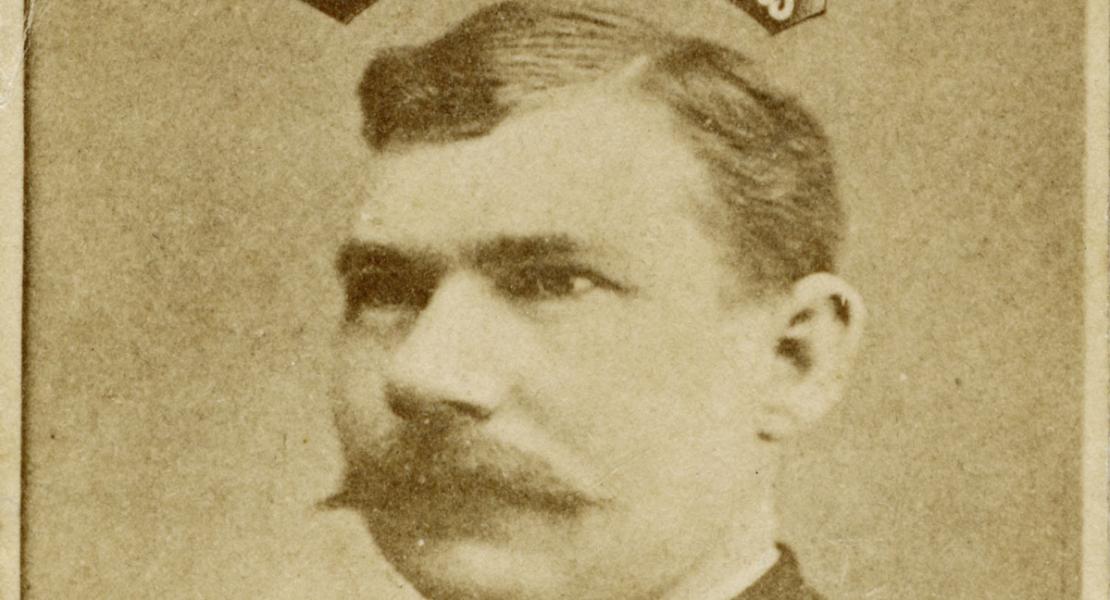 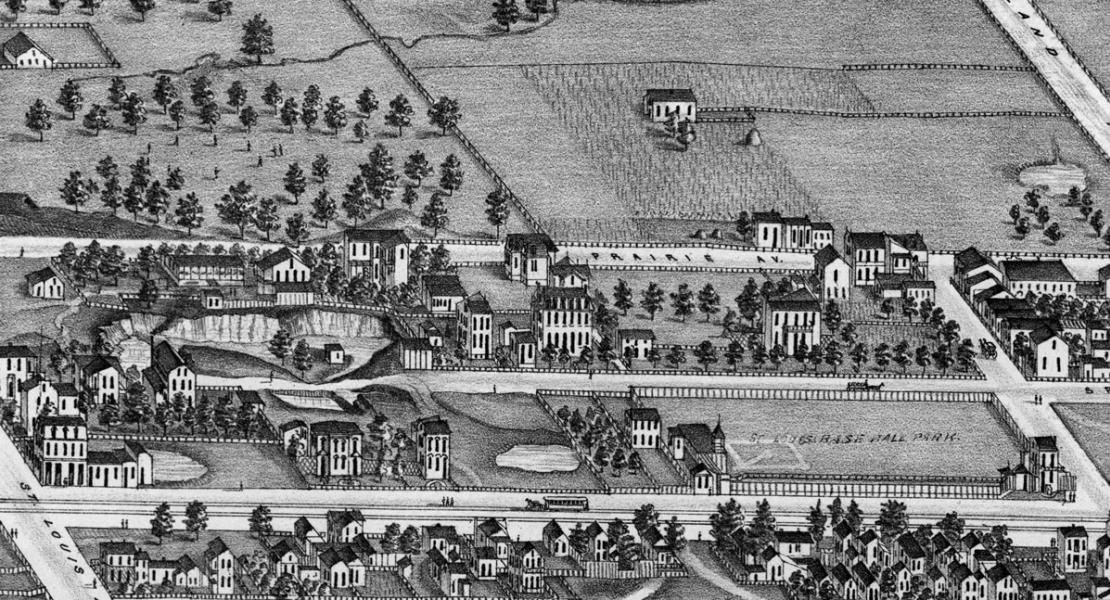 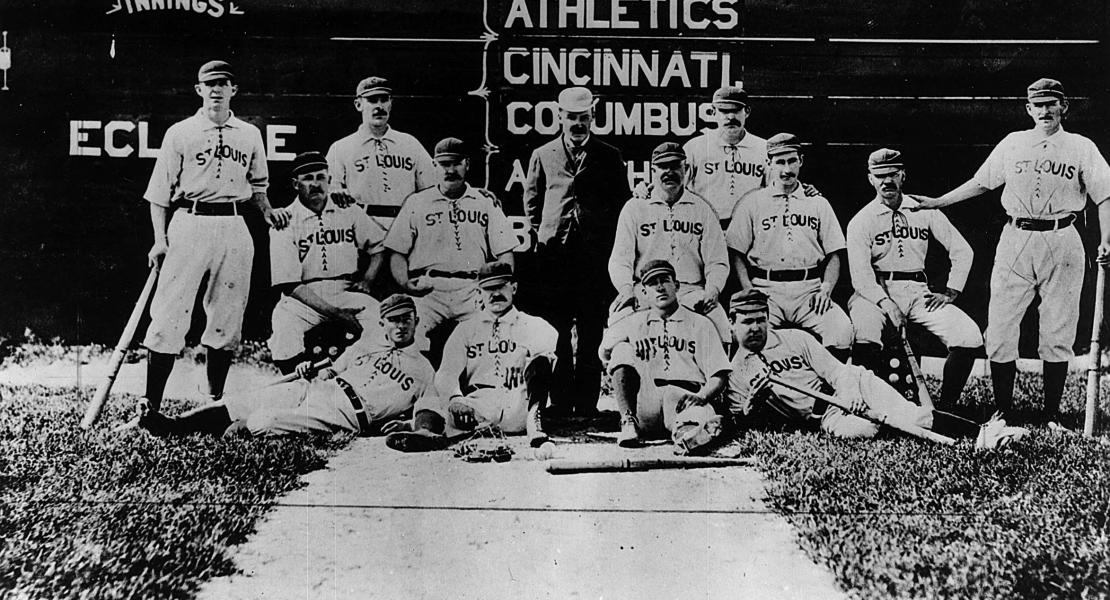 Christian Frederick Wilhelm Von der Ahe, a pioneering figure in early professional baseball, was born on October 7, 1851, in Hille, Germany, and emigrated to the United States in 1867. Beginning in St. Louis as a grocery clerk, Von der Ahe had saved enough by 1870 to acquire a small combination grocery and saloon. Four years later he opened a spacious establishment at Grand and St. Louis Avenues that served as a grocery, delicatessen, saloon, and beer garden.

Grand Avenue Park was a block away. Its baseball diamond had been built by Augustus Solari in 1866. By 1875 Grand Avenue Park hosted the home games of the Brown Stockings, the city’s first professional ball club. The original Brown Stockings, besieged by financial losses and a gambling scandal, resigned from the National League in December 1877. They continued as a semiprofessional ball club, but Solari grew disenchanted over dwindling attendance at their games and announced plans to dismantle Grand Avenue Park.

Von der Ahe stepped in to save St. Louis baseball by taking over the lease of the ballpark in the fall of 1880. Although he did not understand much about the game, he quickly recognized the potential profits available in concession rights. At the time, Grand Avenue Park languished in shambles. Von der Ahe supplied most of the money to construct a new double-deck grandstand and a beer garden in right field.

The attractive ballpark, now renamed Sportsman’s Park, boosted ticket sales, especially on Sunday afternoons when most workers enjoyed their only day off. Ball games entertained weary workers with a sporting event, sunshine, fresh air, and beer. Attendance rose dramatically, and Von der Ahe purchased a controlling interest in the Browns near the end of the 1881 season.

This St. Louis baseball revival coincided with renewed enthusiasm in other large cities excluded from the National League. Consequently, Von der Ahe and his St. Louis Browns joined five other clubs to create the first profitable baseball league, the American Association. The association catered to the working class with Sunday games, liquor sales, and twenty-five-cent tickets (half the National League’s admission price). The National League, on the other hand, appealed on moral grounds to the middle and upper classes by scrupulously avoiding Sunday games and liquor sales.

During the American Association’s 1882 debut, the public indicated a preference for its approach. While National League clubs had rarely enjoyed a profitable season, all six Association teams turned profits in 1882. The following year, when the Browns narrowly missed winning the league’s championship, Von der Ahe claimed to have made $70,000. Von der Ahe’s new venture saw ongoing success on the playing field. Under player-manager Charles Comiskey, the Browns claimed four consecutive American Association championships from 1885 through 1888, winning the World Series against the National League champions in 1885 and 1886 (though the outcome of the 1885 series was disputed and many viewed it as a tie).

During his 1880s heyday, Von der Ahe earned approximately $500,000 from the Browns. He used this baseball income to advance within business and political circles. He speculated wildly in real estate, building whole blocks in the area around Sportsman’s Park and placing neighborhood bars on every corner. He also chaired the Democratic Party’s Eighth Congressional District Committee, which helped elect John O’Neill, the Browns’ vice president, to five terms in Congress. The St. Louis Post-Dispatch described Von der Ahe’s main saloon as a place where “baseball history was written, political careers were launched, and beer flowed in an endless stream.” These political connections served Von der Ahe well in 1887 after the Missouri legislature passed laws that would have banned Sunday ball games. Von der Ahe defied the law, and later won his case through the favorable decision of a judge with political aspirations.

After 1889, fierce rivalry between leagues (including the ephemeral Players’ League) severely weakened the Browns. The American Association dissolved in December 1891, and four of its clubs, including the Browns, were consolidated into an expanded twelve-team National League. The National League dropped its long-standing opposition to Sunday games, beer sales, and twenty-five-cent tickets. Instead, each team received the right to decide these questions for itself.

The 1890s would be as frustrating for Von der Ahe as the 1880s had been glorious. In the National League, the Browns, stripped of practically their whole lineup, including Comiskey, never gave Von der Ahe another winning record. Without Comiskey’s assistance, Von der Ahe lacked the skill and patience to rebuild the team. Over the next seven years he employed eighteen managers, even trying the job himself. His reckless real estate ventures left him heavily indebted to the Northwestern Savings Bank of St. Louis. To pay his debts, Von der Ahe resorted to selling the services of many talented players. In the last two years of his ownership, the Browns finished last in the league.

One of Von der Ahe’s major real estate investments was the new Sportsman’s Park, built in 1893 at the corner of Vandeventer Avenue and Natural Bridge Road. On April 16, 1898, a disastrous fire virtually destroyed the ballpark. Von der Ahe sank his cash reserve into rebuilding, but the fire hounded him. Some spectators who had been trampled in the rush to flee the burning ballpark filed personal injury lawsuits against Von der Ahe. Confronted by too many creditors, he declared bankruptcy. He could not pay off the bonds used to finance the original construction of the new Sportsman’s Park, and in March 1899 the Browns were sold at a public auction.

Von der Ahe faded into the obscurity of the St. Louis saloon business. He died on June 5, 1913, of cirrhosis of the liver. Hundreds attended his funeral. Comiskey, then owner of the Chicago White Sox, eulogized his former boss as “the grandest figure baseball has ever known.” Von der Ahe is buried at Bellefontaine Cemetery in St. Louis beneath a life-­size marble statue of himself. His major-league baseball franchise lives on, now known as the Cardinals.