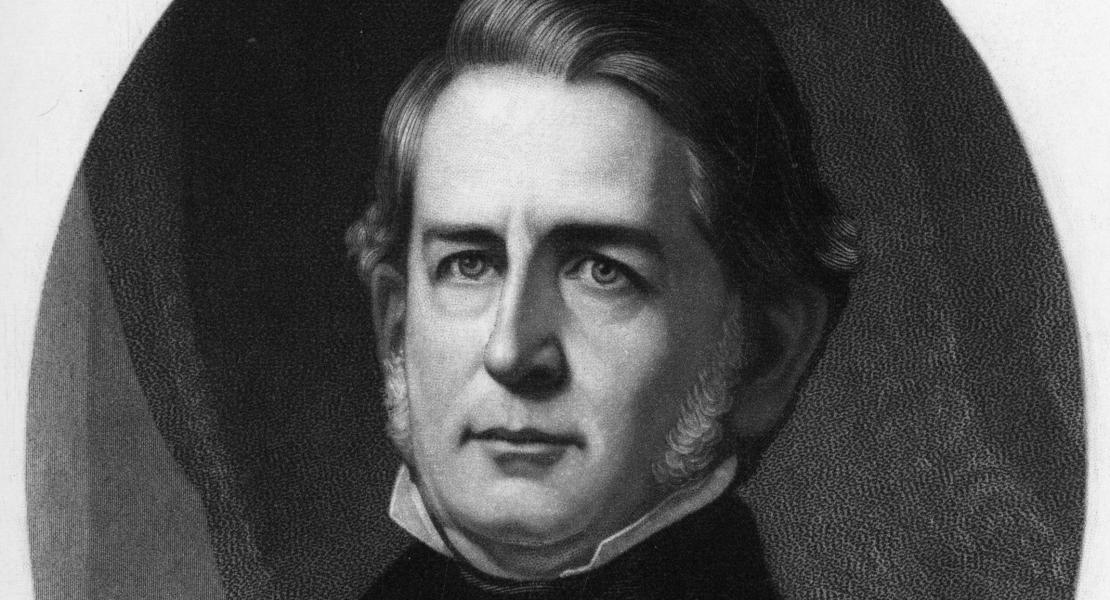 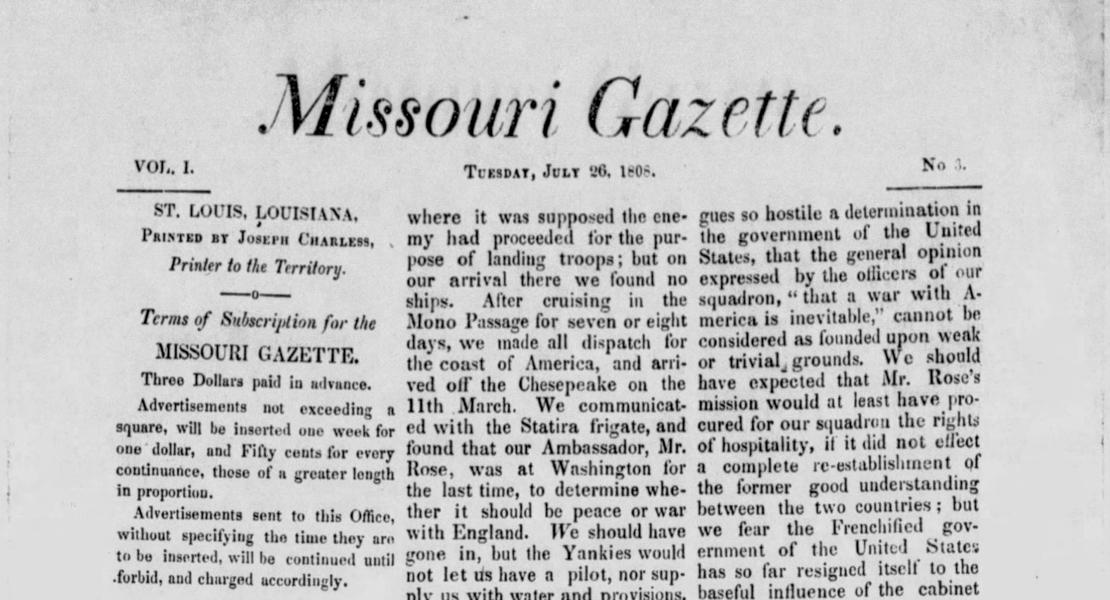 Joseph Charless, the first printer in St. Louis and father of journalism west of the Mississippi River, witnessed St. Louis’s transformation from a rude frontier village to a cosmopolitan metropolis and business center. Charless was born in the village of Killucan in County Westmeath, Ireland, on July 16, 1772, the only child of Edward and Ann Chapman Charles. Joseph, who added an extra s to his name after he arrived in America to give clue to its proper bisyllabic Irish pronunciation, had worked as a printer in Dublin following an apprenticeship at the press of William Kidd in Mullingar.

Eighteenth-century Ireland was a troubled place, and problems with governmental censorship may have caused Charless to flee his native land in 1795 and travel to the United States in search of more promising business opportunities and greater freedom. Charless settled in Pennsylvania, where he opened a bookstore, established a press, and began publishing the Mifflin Gazette in Lewistown. He next worked with his countryman Mathew Carey, a successful Philadelphia printer and publisher, who befriended many Irish expatriates. Charless began printing, selling, and distributing books in frontier towns in the Ohio valley in association with Carey. He traveled from settlement to settlement selling religious books such as the quarto-size Rheims-­Douay version of the Bible, which he had designed and printed in Philadelphia for Carey, along with an assortment of spellers, textbooks, children’s books, and works of history.

In Lexington, Kentucky, Charless briefly published the Independent Gazeteer in 1803, and in 1807 he began printing the Louisville Gazette. While in Kentucky he produced numerous titles for himself and for others, the most successful being Charless’s Kentucky, Tennessee, and Ohio Gazeteer, which went through four numbers before ceasing publication.

Under a contract for the western territories, he also printed and distributed Noah Webster’s famed “blue back” Spelling Book. In 1808 he moved to St. Louis, where he became the city’s first printer. The Ramage hand-printing press and several fonts of type he took with him were the first to reach the capital of the Louisiana Territory.

Many of the newly arriving Anglo-Americans who moved west of the Mississippi following the Louisiana Purchase considered the printing press an indispensable tool for building a new democratic order. As early as 1805 territorial governor James Wilkinson had decried the lack of a press in St. Louis, and three years later his successor Meriwether Lewis subsidized Charless’s relocation to Missouri with a contract to print the territorial laws and official documents. The publication of the first issue of the Missouri Gazette on July 12, 1808, marked the beginning of printing in Missouri. Charless sensed that it was a historic moment, noting in the Gazette’s prospectus, “It is evident that in every country where the rays of the press are not clouded by despotic power, that the people have arrived to the highest grade of civilization.” The Missouri Gazette, also known at various times as the Louisiana Gazette, served subscribers in St. Louis and eventually in communities as far-flung as Ste. Genevieve and Potosi in Missouri and Cahokia and Wood River in Illinois. Between 1808 and 1815 the Gazette was the sole printing establishment in St. Louis, and Charless truly was the “printer to the territory.” For a brief time after his arrival in St. Louis, he had continued to publish the Louisville Gazette, but in 1809 he closed his Kentucky office to devote his full attention to his operations in Missouri.

Charless was responsible for other printing firsts in the Missouri Territory. In 1809 the new territorial printer published Frederick Bates’s compilation of The Laws of the Territory of Louisiana, Comprising All Those Which Are Now Actually in Force Within the Same, the first book-length work published west of the Mississippi and probably the first Missouri publication bound between hardcovers. He had previously printed Bates’s “Oration Delivered before the Saint Louis Lodge, No. 111. At the Town of Saint Louis in the Territory of Louisiana, Wednesday, the 9th Day of November, 1808,” a short pamphlet much less imposing than its title. In 1812 Charless printed the Missouri Fur Company’s “Articles of Association,” a broadside historic in the annals of the American fur trade. Six years later he published Missouri’s first almanac, Charless’ Missouri and Illinois Almanac.

In the Gazette, Charless occasionally included notices and other documents in French for the benefit of St. Louis’s large Creole populace. He opened his columns to local “correspondents” and community leaders, published official documents and excerpts from eastern newspapers, and offered his readers selections from western travel narratives and poetry. The Missouri Gazette was a cultural linchpin that documented many aspects of territorial life.

Being a frontier editor was not without peril. On more than one occasion, the fiery, uncompromising Irishman discovered that his opinions could endanger both life and livelihood. His early experiences in Ireland prepared him for such occupational hazards. In St. Louis, local toughs and critics unhappy with his stands on issues threatened him physically and pelted his house with brickbats. Charless ardently defended his views in an age when frontier folk sometimes held their emotions on their sleeves and occasionally preferred to resolve differences with duels and brawls rather than reasoned discourse. He had plenty of critics, including Thomas Hart Benton, who for a time edited the rival St. Louis Enquirer, established in 1818.

Having fled Ireland to escape oppression, Charless refused to condone what he considered injustices. He adopted the unpopular stance of advocating restrictions on the spread of slavery during the Missouri statehood crisis. He editorialized against what he considered elitist and aristocratic pretensions and routinely criticized the powerful St. Louis clique that he labeled the “Little Junto.” After Benton killed Charless’s friend Charles Lucas in a duel, Charless used the Gazette’s columns to condemn both the perpetrator and the practice. He also questioned the validity of Spanish land concessions in Louisiana, much to the consternation of many of St. Louis’s largest land claimants.

The controversies that continually seemed to engulf him prompted Charless to sell his profitable enterprise to James C. Cummins in 1820. Cummins later resold the Gazette, renamed the Missouri Republican, to Charless’s eldest son, Edward, who continued to publish the newspaper founded by his father. Missouri’s first newspaper remained in existence under various names and publishers until it closed in 1921, thus making it one of the longest-running major daily newspapers in US history.

Following his retirement from publishing in 1820, Joseph Charless remained active. He was a strong supporter of early St. Louis cultural institutions. A lover of books, Charless established a reading room adjacent to the Gazette’s offices, and he also worked to create a public library. To help make ends meet, he also operated a livery stable, a boardinghouse, a tavern, and an apothecary. Even those who disagreed with his views respected his entrepreneurial successes. When he died in St. Louis on July 28, 1834, Charless could claim an eventful life and distinguished career that had helped bring the gift of the printed word to St. Louis, which soon became a major nineteenth-century printing center. His publications encouraged public debate in the frontier territory, educated and entertained readers hungry for newspapers and books, and contributed handsomely to the historical memory of St. Louis’s early days.