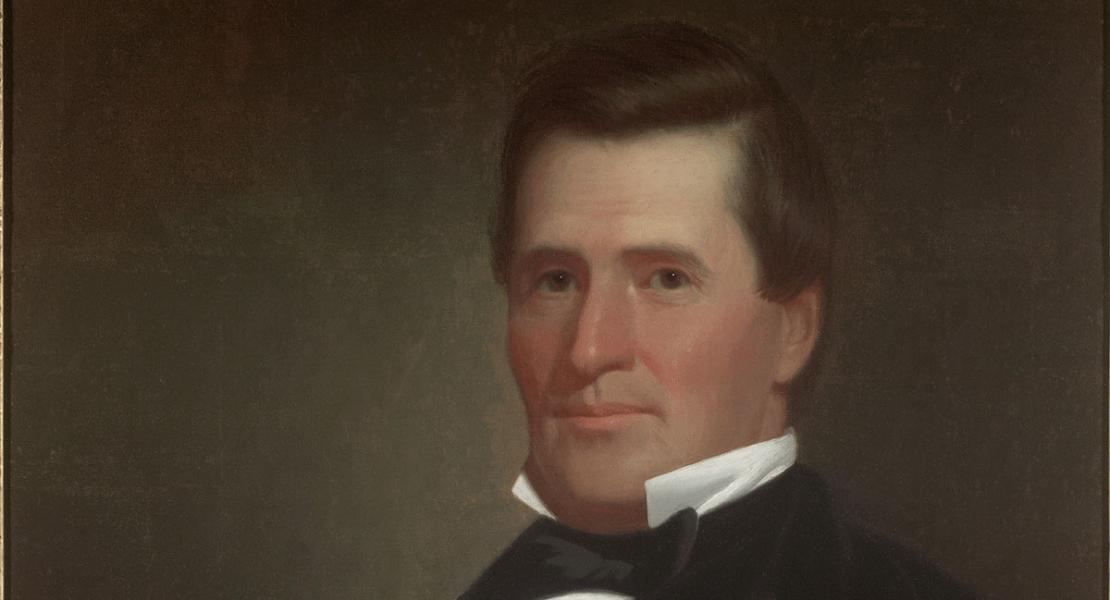 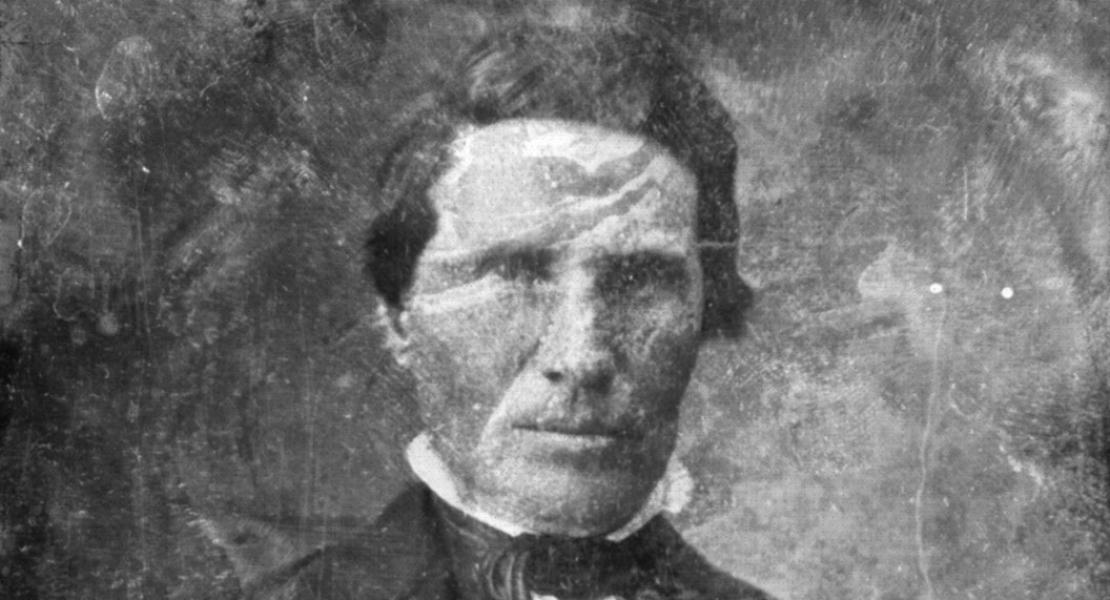 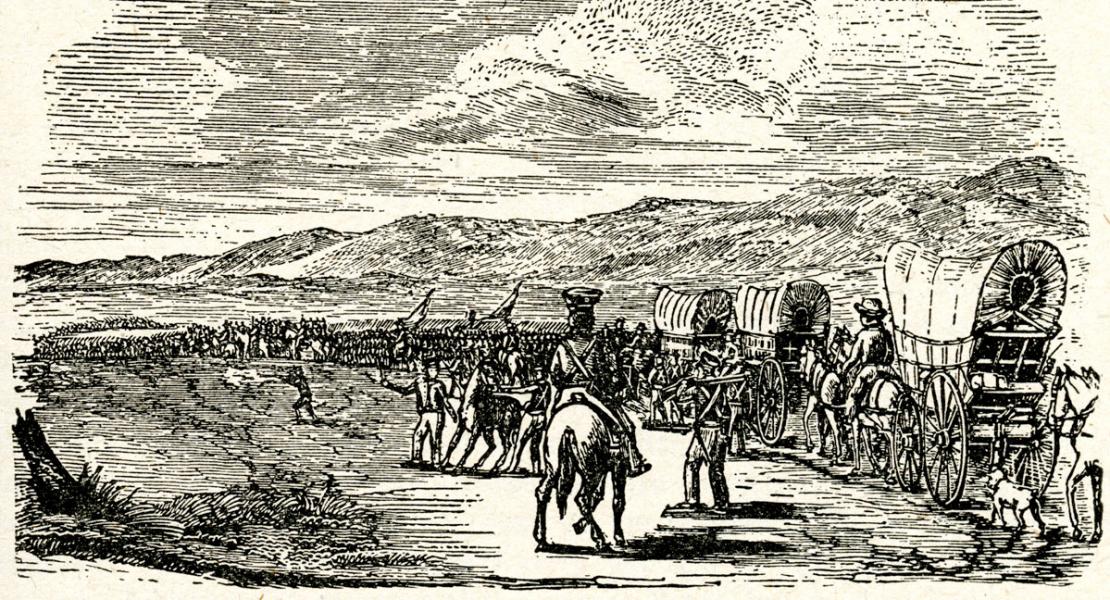 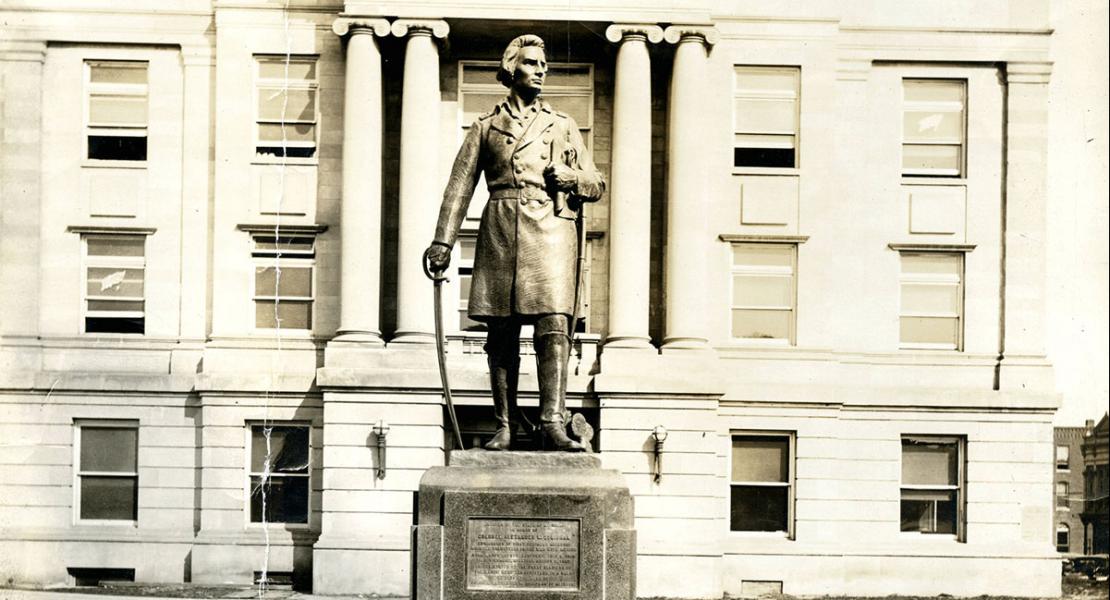 Born on July 9, 1808, in Mason County, Kentucky, Alexander William Doniphan was the son of Joseph and Anne Smith Doniphan, both from Virginia. After training as an attorney in Kentucky, Doniphan moved westward, settled in Lexington, Missouri, in March 1830, and began practicing law. In May 1833 he moved to Liberty, Missouri, a boomtown in the far western part of the state.

In Liberty, Doniphan continued to build his law practice, acquiring as a client an unpopular group, the Mormons, who had been physically run out of Jackson County. Doniphan began legal action against Jackson County to place the Mormons back on their land and to obtain damages for losses from anti­-Mormon violence. He also filed criminal charges against those accused of mob actions. He did not have much success. In February 1834 Missouri’s attorney general, Robert William Wells, informed the Mormons after preliminary hearings “that all hope of criminal prosecutions were at an end.” Civil charges were no more satisfactorily dealt with, and in the end the Mormons were unable to return to Jackson County. Doniphan, however, helped establish the especially created county of Caldwell in western Missouri as a haven for them.

In 1838 Doniphan entered the Missouri State Militia, accepting a commission as brigadier general of the Western Division. Although this marked the beginning of his military career, he did not know that he would soon cross paths with the Mormons once again. The rapid growth of Caldwell County, and the Mormons’ movement into surrounding counties, had brought tension to the western part of the state. A series of incidents, in which both sides were at fault, erupted violently in August 1838 during an election at Gallatin, in Daviess County, north of the Mormon-controlled Caldwell County. By early September the countryside was ablaze with anti-Mormon sentiment.

Sustained trouble came on October 25, 1838, when a Mormon military unit under David W. Patten, an apostle in the church, engaged a detachment of militia under Captain Samuel Bogart at what has been christened the Battle of the Crooked River. Several casualties resulted, with three Mormons being killed (one of whom was Patten) and one fatality in Bogart’s ranks. The engagement of state troops, regardless of the circumstances surrounding it, and rumors that the Mormons were in open rebellion against the state were sufficient to prompt Missouri’s governor, Lilburn W. Boggs, to call out reinforcements to restore order.

Doniphan’s troops arrived at Far West, Missouri, the seat of government in Mormon-controlled Caldwell County, late in October 1838 and linked up with militia from other locations. Their task was to gain the surrender of Mormon weapons and the turning over of key Mormon leaders for which they possessed arrest warrants. Doniphan served as a mediator in these negotiations, eventually securing the surrender of the Mormon leaders on October 31.

The next day General Samuel Lucas convened a court-martial, found Joseph Smith Jr. and other Mormon leaders guilty of treason, and ordered their execution by firing squad. Doniphan, apparently the only lawyer present, protested that the court-martial had been “illegal as hell” because civilians were not subject to military law and because the judges sitting for the court-martial were not all members of the military. Despite his pleas, on the morning of November 2 Doniphan received orders to execute the prisoners. He refused to carry out the order and wrote to General Lucas: “It is cold-blooded murder. I will not obey your order. My brigade shall march for Liberty tomorrow morning, at 8 o’clock; and if you execute these men, I will hold you responsible before an earthly tribunal, so help me God.”

Doniphan’s stand prompted Lucas to bring the prisoners to Richmond, Missouri, for trial during the week of November 12, 1838. Once again Doniphan served as the Mormons’ legal counsel. After a preliminary court of inquiry the majority of the prisoners were released, but the Mormon prophet Smith and a few other key leaders were placed in the Liberty jail over the winter of 1838–1839 to await trial. Eventually, Doniphan was able to get a change of venue for them from Daviess to Boone County. While en route to the county seat at Columbia, they were allowed to escape and leave the state.

Doniphan’s identification with the unpopular Mormons in Missouri during the 1830s did not hurt his personal career in the 1840s. His legal career escalated after the Mormon War, and he was showered with important and lucrative cases. In 1840 he was also elected to his second term in the state legislature by an overwhelming majority. By the early 1840s, therefore, Doniphan had demonstrated his capabilities in three career endeavors: the law, politics, and the military. He was not yet forty years old at the time.

When the United States entered the war with Mexico in 1846, Doniphan commanded the First Missouri Volunteers. Part of the Army of the West under the command of Stephen Watts Kearny, Doniphan’s Missourians made up nearly half of the 1,650-man army. Departing Fort Leavenworth in June 1846 for the Southwest, by August the army had reached Santa Fe, where the Mexican government surrendered without a battle. While other parts of the army pushed on toward California, Doniphan’s men remained in Santa Fe with orders to pacify or defeat hostile Indians and establish a government acceptable to Congress, and only then to push southward into Chihuahua, Mexico.

Doniphan quickly created a code of organic laws for the new territory and began actions to pacify the Indians of the region. In late 1846 he campaigned against the Navajo north of Santa Fe, hounding the Navajo and Zuni chieftains and their people until they were willing to meet at treaty tables. By December 1846 his efforts had brought at least a temporary peace among the southwestern Indians.

Late in the year Doniphan’s men marched for El Paso and on Christmas Day camped near the city at a place called El Brazito. They soon learned that a Mexican army was approaching; by the time the Mexicans attacked, Doniphan’s men had moved into defensive positions. After a short fight the Mexicans had lost 40 to 50 killed and 150 wounded. Doniphan’s casualties were 7 wounded.

A few days later Doniphan’s column marched into El Paso, where they rested before moving on to Chihuahua. On February 28, 1847, Doniphan was nearing Chihuahua when he encountered a sizable Mexican force of about three thousand regular troops supported by another thousand ranchers and peasant farmers near the Sacramento River. Doniphan’s Missourians began a flanking action, which the Mexicans countered with a cavalry charge into the American center. They were driven back by artillery, dispersing the tightly concentrated Mexican forces. Throughout this action Doniphan sat serenely on his horse and at one point remarked sarcastically, “Well, they’re giving us hell now boys.” At a key moment Doniphan ordered his troops to advance across the field. The battle secured the province for the United States.

After this action, Doniphan’s force joined Zachary Taylor’s army at Buena Vista. Soon, with the First Missouri’s enlistment expiring, Doniphan marched them to Port Isabel, near Matamoros, and they sailed for New Orleans and then on to St. Louis, where the men were mustered out. In one year his men had traveled more than thirty-five hundred miles by land and another thousand by water, fought two major battles in Mexico, established an Anglo-American-based government in New Mexico, subdued southwestern Indians, and paved the way for the annexation of the territory that became New Mexico and Arizona.

After the war Doniphan continued his business, legal, and political activities. His most significant political activity took place in 1860–1861 when he worked to prevent Missouri’s secession from the Union and as a delegate to the Washington Peace Conference. Thereafter he continued private pursuits until his death on August 8, 1887, at his home in Richmond.