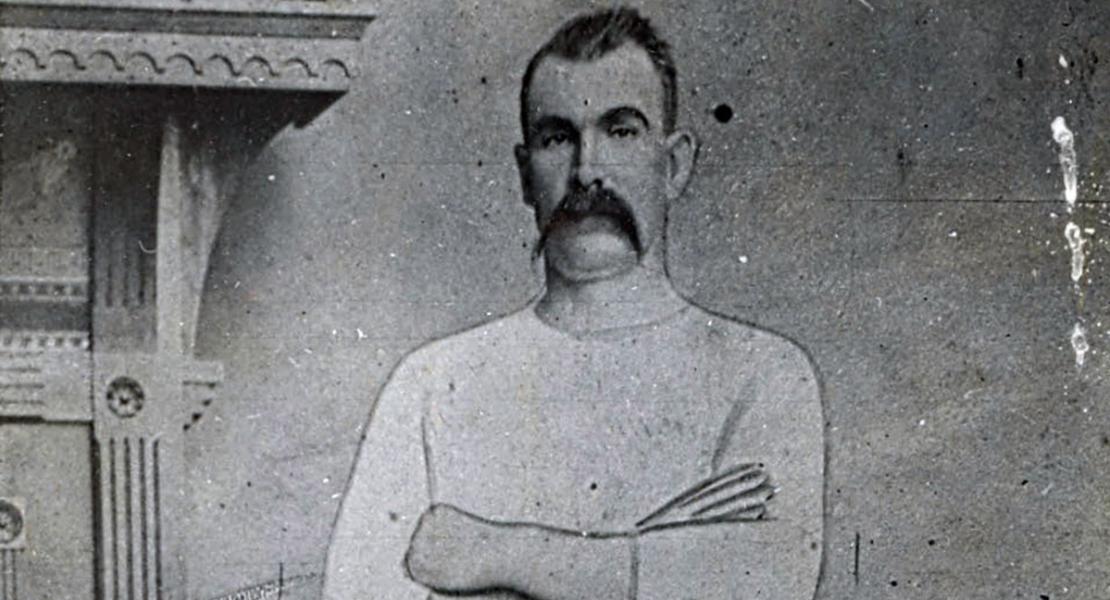 Nathaniel “Nat” N. Kinney has a popular image as a romantic, violent, swashbuckling westerner, a champion leader of Baldknobber vigilantes in Taney County, Missouri, who knew how to harness both men and horses. His image, like that of the vigilance committee he helped organize, is often exaggerated and partly fabricated.

Kinney was an imposing figure variously described as six-foot-two to six-foot-five, weighing some 220 or 250 pounds (accounts of his size are smaller in Kansas newspapers because he did not have the legendary persona there that emerged in Missouri’s sensationalized press). Writers have emphasized his “dual personality.” Negative descriptions of him came from political opponents and victims of violence associated with Kinney and the Baldknobbers; Baldknobber apologists, principally the descendants of the Alonzo Prather family and journalists who interviewed them, have portrayed Kinney’s better qualities.

Kinney was born in New York in 1839, lived in Virginia, spent time as a Union soldier in the Civil War, moved to Indiana, apparently spent a brief time in Colorado, and then moved to Neosho Falls, Kansas, by 1875. He farmed on a modest scale, but in 1877, at age thirty-eight, he decided to move to Topeka, which was undergoing tremendous economic and population growth. While there, he worked as a teamster and became manager for a public hack service.

In Kinney’s spare time he led a ruffian’s life in Topeka and was remembered locally in many public episodes. However, an old militia mate from Kansas recalled Kinney as a helpful person with travelers at the Topeka train depot, giving directions and aid. In Missouri his contemporaries witnessed his passionate rhetoric devoted to a pursuit of vigilante leadership and political power. According to neighbors, though, he knew the quiet of family life, was proud of his children, and loved fine horses.

In Kansas, Kinney joined the Topeka Rifles, a local militia, to side with merchants and the Atchison, Topeka, and Santa Fe Railway to combat public unrest and maintain the public peace following violent labor strikes in 1877. These nationally reported strikes were the first major railroad strikes in American history. A local newspaper referred to Kinney and three other large men in the militia group as the “Big Four” who presented a conspicuous physical threat to any opposition.

Because of his exceptional height, comrades chose Kinney as color sergeant to carry the flag, and the Topeka Rifles became known as the Capitol Guards. In militia meetings Kinney exhorted his peers with emotion and was recognized among the local men as an orator. He also developed considerable skill as a marksman and horseman, winning local competitions. In fact, he had several racehorses quartered at the local fairgrounds.

Kansas newspapers reported that Kinney left Topeka in 1880, the year that voters approved a prohibition amendment. The Topeka Daily Commonwealth wrote, “Kinney left Kansas with that rough and rowdy element that went when the open saloon disappeared.” Kansans labeled him a drunken brawler and even a coward who picked fights with men his physical inferior. One journalist recalled that a prominent Kansas legislator knocked Kinney unconscious with a billiard cue in a local saloon. The press said Kinney headed for southwest Missouri, where, by March 1882, he was working on the public square in Springfield as an employee in a saloon.

By the summer of 1882, citizens in Springfield had organized a local militia, the Springfield Light Guards. Anxious to serve, Kinney titled himself “captain,” but as in both the Civil War and Kansas, his peers denied his election as an officer. In December 1882 a fight in Kinney’s saloon left a man mortally wounded. In January 1883 he relocated north of Kirbyville, in Taney County. Kinney began speaking for the agricultural reform of the Grange, a populist movement that agitated for fencing livestock. Local Democrats soon drafted him as their candidate for state representative in 1884, but he lost.

Kinney’s defeat did not restrain his ardor for becoming a local leader. He organized a neighborhood Sunday school where he sometimes preached. Seeking the high moral ground, he soon became inextricably enmeshed in a local regulator movement called the Baldknobbers. This group desired capitalist modernization and called for law and order. They advocated swift punishment for crime, churches and evangelical morality, and literacy and education, and wanted squatters to legally enter their land and become tax-paying citizens. They selectively whipped and beat members of the opposition, and hanged two of them. Some anticipated new railroads and boomtowns at Forsyth and Kirbyville.

Kinney became chairman of the local Democratic Party in 1886 and ran again for state representative. Taney was the only county in the “Keep-Sake” district of Republican-dominated southwest Missouri that wavered in its control of the local courthouse. Party workers imported a well-known Republican from Boone County, Arkansas, to oppose Kinney and another from Greene County, Missouri, to run for prosecutor. Kinney narrowly lost by forty-nine votes, and Republicans kept local control.

Kinney returned to third-party politics, speaking for the Agricultural Wheel at local public celebrations and Civil War encampments. Old hatreds from vigilante conflict followed him, and on August 20, 1888, a member of the opposition killed him at Forsyth.