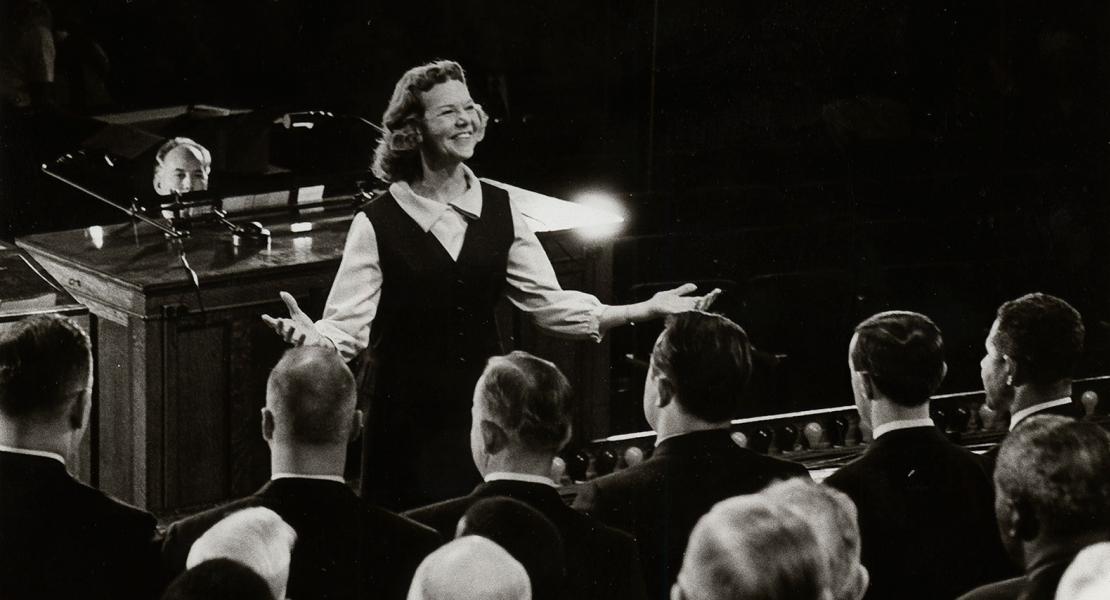 Kathryn Johanna Kuhlman, born in Concordia, Missouri, on May 9, 1907, became Missouri’s most famous independent deliverance evangelist of the twentieth century. When she died in Tulsa, Oklahoma, on February 20, 1976, millions counted her as their minister and thousands claimed that they had experienced her healing powers.

Kuhlman was one of the early pioneers of radio with a Denver show in 1933 called Smiling Through. She created the Christian talk-show format with her long-running series on CBS, I Believe in Miracles. Beginning in 1965, she taped more than five hundred nationally syndicated television programs that featured people who had been healed through her ministry. She denied that she was a “faith healer,” claiming that healing was produced by the Holy Spirit; her gift was in recognizing the healing.

Kuhlman’s career in evangelism began at the age of seventeen while visiting her sister Myrtle Parrott, wife of the Sedalia-born Everett Parrott. Both Myrtle and Everett had attended Moody Bible Institute and were evangelizing the West. Myrtle persuaded Kuhlman's mother, Emma Walkenhorst Kuhlman, to allow Kathryn to travel with them for a short period. When the time came for Kathryn to return home, she chose to stay with her sister and brother-in-law and soon found herself at the altar giving her testimony and ministering to those who responded to Everett’s message.

At the age of twenty-one, in 1928, Kuhlman began her own ministry in Boise, Idaho. Together with her highly educated pianist friend Helen Gulliford, she traveled to towns in the West that no one else would evangelize. Often staying in turkey houses or outbuildings, they begged local communities for the opportunity to preach. Their travels took them through Idaho, Utah, Colorado, and elsewhere. In 1933 they settled in Denver and established a ministry that lasted more than five years. Kuhlman defended her call to the ministry by claiming that God could find no man that was able and willing to pay the price of a servant of God, so he called her, a woman.

Kuhlman became the subject of controversy when her relationship with Burroughs Waltrip, a recently divorced itinerant minister, became public. She met Waltrip shortly after the accidental death of her father, Joseph Adolph Kuhlman, in 1934. She was at the height of her early career, having established with Helen Gulliford the Denver Revival Tabernacle. The handsome Waltrip visited the tabernacle and fell in love with Kuhlman, leaving his wife and children for her. He and Kuhlman married in 1938, but soon their relationship, considered scandalous by many of her followers, was in ruins. In 1944, after years of soul­-searching and damage to her career, Kuhlman bought a one-way ticket heading east. She never saw Waltrip again; he later divorced her in 1948.

In 1944, Kuhlman went to Franklin, Pennsylvania, where she built an evangelistic radio ministry on WKRZ in Oil City that reached all the surrounding states. She was preaching at the Gospel Tabernacle in Franklin when people began to experience healing. Eventually, Kuhlman moved to Carnegie Hall to conduct her famous “Miracle Services.” Before she died in 1976 she held regular services at the Shrine Auditorium in Los Angeles and in Pittsburgh and also made guest appearances all over the world, including one at Kiel Auditorium in St. Louis in 1972.

Kuhlman accepted an honorary doctorate in humane letters from Oral Roberts University in 1973 even though she consistently preached disdain for educated clergy or theologians. Having dropped out of school at the age of fourteen, she never found the time to complete a high school or college degree. She claimed her education came directly from the Holy Spirit. There is some evidence to suggest that she was influenced by Charles Price, Phil Kerr, and Aimee Semple McPherson as well as Norman Vincent Peale’s The Power of Positive Thinking. A biography by Wayne Warner claims that Kuhlman enrolled for two years at the Simpson Bible Institute but was suspended in 1926 “after being caught in a midnight rendezvous.” She also briefly attended Lighthouse of International Foursquare Evangelism (LIFE) Bible School in Los Angeles, California.

Success necessitated the creation of the Kathryn Kuhlman Foundation. Millions of dollars poured into her foundation that supported twenty-two mission stations around the globe before closing in 2016. Substantial sums of money were also donated to higher education, including Evangel University in Springfield, Missouri.

Kuhlman’s down-home preaching style and simple message brought comfort to millions of people as they listened to her on the radio or watched her on television. In an age of increasing religious polarities, her message and ministry were both Pentecostal, that is, charismatic, and ecumenical. She brought Christians (Protestants and Catholics), Jews, Muslims, and atheists together under one roof to attend her services.

Marla J. Selvidge is professor emerita of religious studies at the University of Central Missouri.