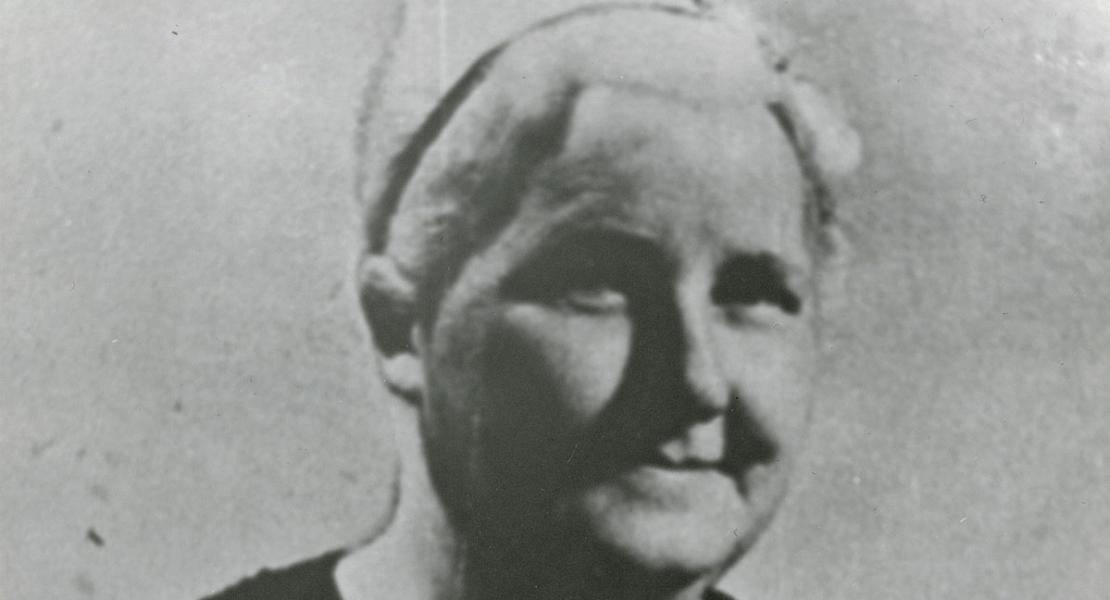 Mary Elizabeth Mahnkey was a lifelong newspaper and magazine journalist, and a regional poet. Born in Boone County, Arkansas, on August 16, 1877, but reared in Taney County, Missouri, she began writing for the public at age fourteen. She wrote local columns for county newspapers for forty years before widening her audience in 1930 by writing for Springfield newspapers and statewide magazines. The Great Depression–era tourist trade and market for regional journalism significantly enhanced her opportunities and notoriety. Some have called her a “backwoods philosopher” and others the “poet laureate of the Ozarks.”

Mahnkey was reared in a progressive family devoted to education and promotion of local society. Her father, Alonzo Prather, was a five-term state representative, a local orator, and a journalist. He founded a Springfield newspaper in 1880, but soon moved to Taney County, where he was proprietor and editor of Home and Farm. Daughter Mary Elizabeth began writing for her father’s paper and continued for the next fifty-seven years while living in Taney County. She had a brother who became a career newspaper journalist, and her son Douglas has authored numerous stories and two books.

Mahnkey attended subscription schools, never graduating from a high school. She nevertheless obtained a teacher’s certificate in 1893 and taught a few terms at Ridgedale (1894), Union Flat (1896), and Branson (1898). Between teaching assignments, she attended a local academy at Bradleyville, Missouri, where she was active in the literary society and edited the school newspaper.

In 1899, Mary Elizabeth Prather and Charles Preston Mahnkey married. They were farmers and country merchants operating mercantile establishments in several hamlets, including Mincy, Melva, and Oasis. Charles managed cotton gins and water mills, while Mary Elizabeth was the postmistress and the clerk in the stores. During the time they lived at Oasis on Long Creek, improved transportation and the attraction of Lake Taneycomo brought tourists and journalists from Springfield who provided trade and discussions about local society and changes in the countryside.

In 1930, Mahnkey began a monthly column for Springfield newspapers called “In the Hills,” which she continued until 1948. She received much regional acclaim for her serial, “When Roseville Was Young,” a historical remembrance of Kirbyville, Missouri, in the Branson White River Leader in 1933–1934. Her “In the Hills” columns and the Roseville story are significant cultural and historical writings.

Monthly magazines such as Game and Fish News, Missouri Magazine, folklore serials, and the Arcadian Magazine carried her poems and short stories. Occasionally, she placed stories in the St. Louis Post­Dispatch and Country Home Magazine. A few of her writings were used by radio journalists. The only collected work published during her lifetime was a pamphlet of poetry titled Ozark Lyrics. It began as a successful money-raising event sponsored by a women’s civic group, the Taneyhills Study Club, and was published in 1934.

In 1935 Country Home Magazine sponsored a rural-correspondent contest. Forsyth editor-publisher W. E. Freeland encouraged Mahnkey and helped her select a number of her columns. The Crowell Publishing Company in New York chose her from a field of sixteen hundred to receive the national award as the best rural correspondent.

Mahnkey’s family background and paternal direction encouraged her creative writing, but she later noted that she felt compelled to write. She dedicated one of her poems to the question, “My Poems?” implying that the exercise was routine, as the poems came to her when she churned butter, made bread, hung clothes, and they just “danced ’round my head.” She also said she wrote her stories to counter the negative stereotypes of the Ozarks prevalent in the sensationalized urban press, and for the old people who enjoyed memories of times past. Her writings have a distinctly feminine point of view and have probably had a wider audience among women than men.

Mahnkey wrote sentimentally of life and death, music, dancing, laughter, school, love, common domestic chores, and natural environments. She maintained a literary reverence for neighbors and nature, and a fondness and pride in the common work and joys of life. Her poems vary in quality as some are more polished than others.

Poet John G. Neihardt wrote in the preface of Mahnkey’s Ozark Lyrics of her warmth that “grows out of the womanly heart of one who is truly a good neighbor to her fellows and to everything that lives.” St. Louis Post-Dispatch correspondent F. A. Behymer said in 1948, “She wrote to make the best of things, making the best of things when life has grown weary and life’s fabric has grown thin.”

Mahnkey died on August 13, 1948. In 1975 she became one of the first six inductees into the Ozark Hall of Fame at the School of the Ozarks, in Point Lookout, Missouri.