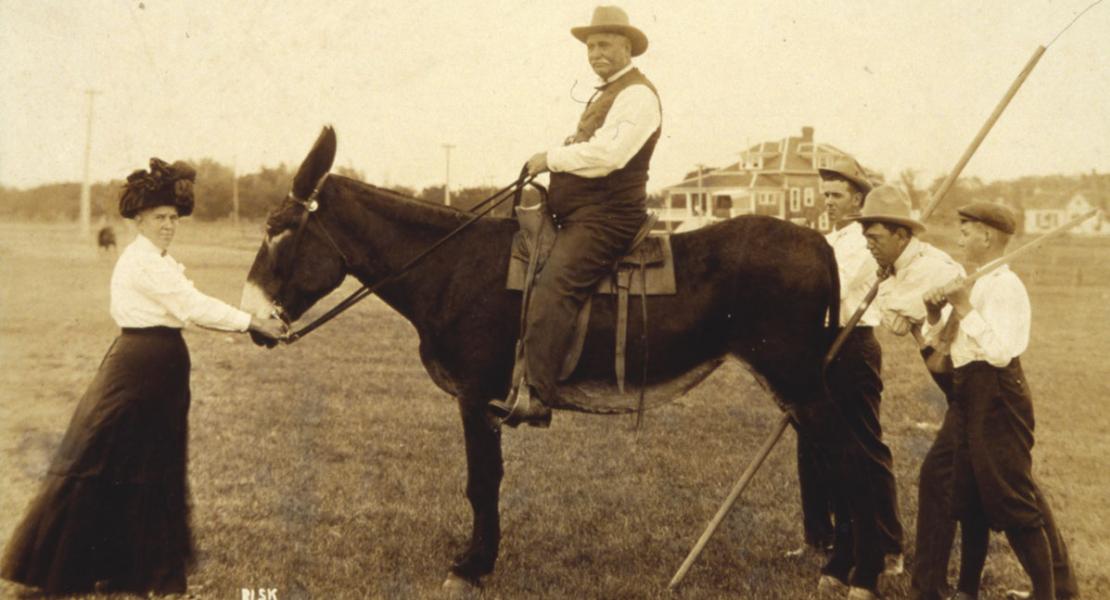 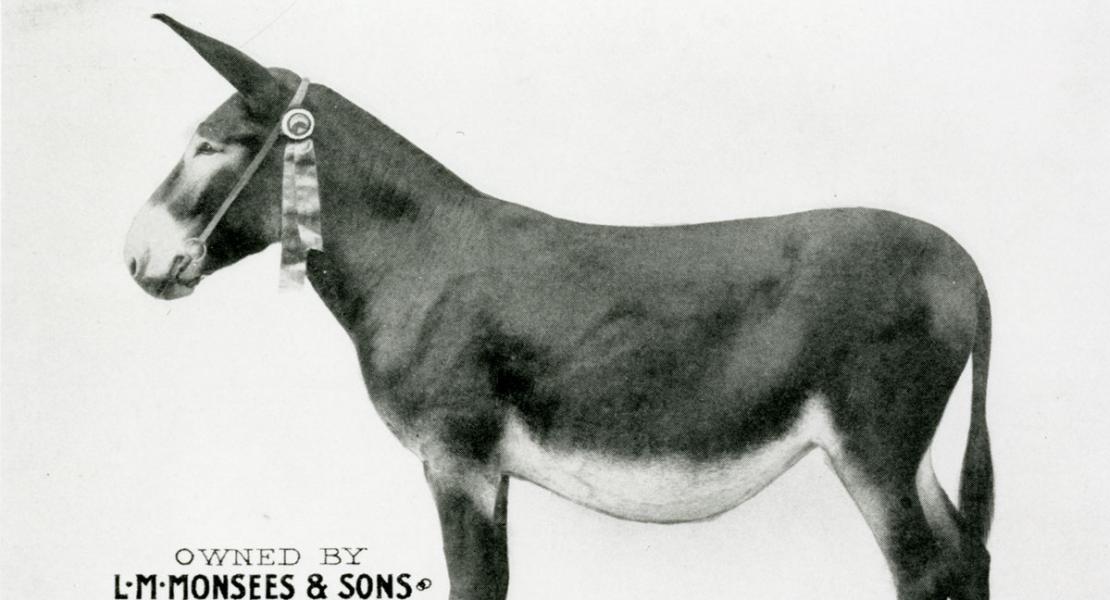 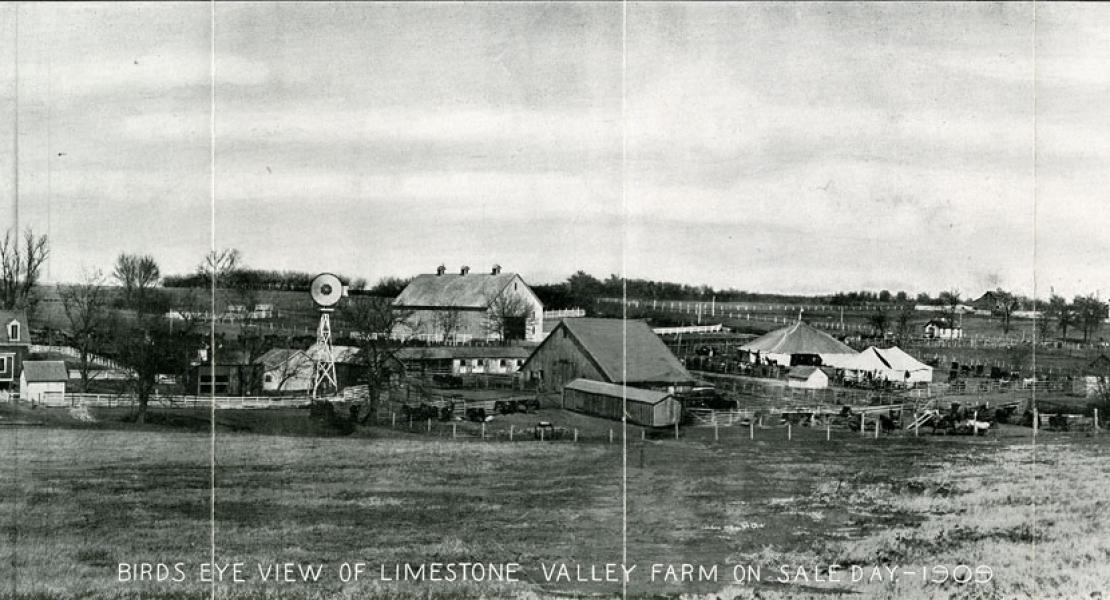 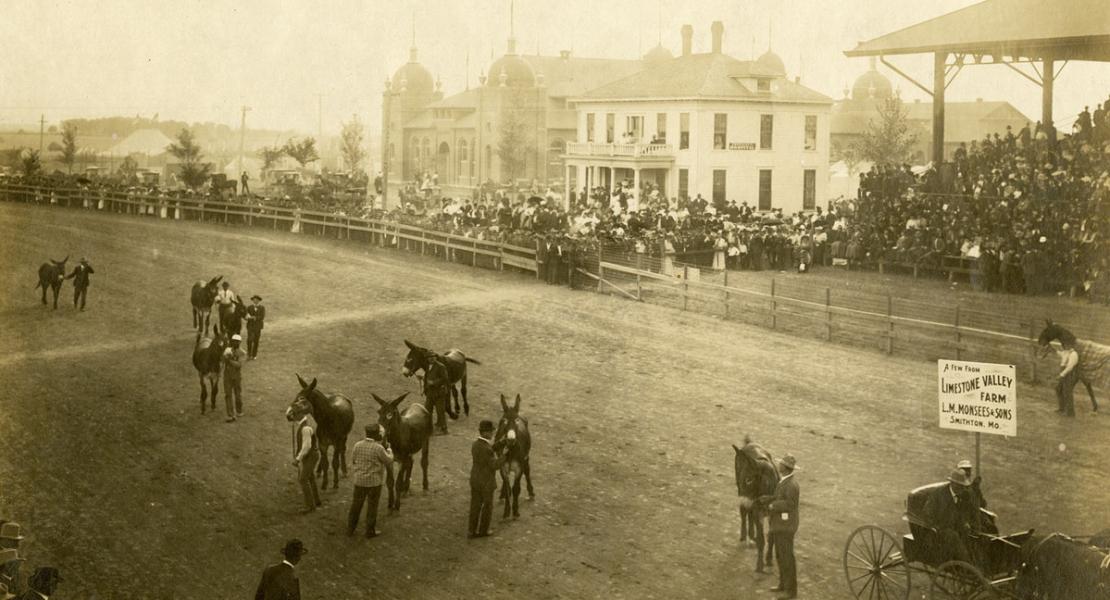 Louis M. Monsees, a livestock breeder, is recognized for his contributions to the breeding of Missouri mules. He was born on November 20, 1858, the son of John H. and Lucinda Momberg Monsees, near Smithton, in Pettis County. As a youth he attended local schools while working with his father on the family farm.

In 1880 Monsees married Rickey Kastens, and in 1886 the couple purchased one hundred acres, which became the core of Limestone Valley Farm. By 1919 the farm had increased to seven hundred acres, with seven barns and three houses. Monsees was joined by his sons Nicholas, Deo, and Kala in the management of the farm.

Monsees’s career as a breeder of jacks and jennets had begun in 1870; at the age of twelve, he traded two pocketknives, a small pistol, and four dollars to a westbound traveler for a jack named Toby. His first annual sale of mules brought a total of $8,490. In the years that followed, the annual sale at his Limestone Valley Farm became the nation’s leading auction of mules, often setting the year’s market price. In 1910 total sales were $67,750. Individual jacks frequently brought more than $500; an occasional animal brought up to $5,000.

The Missouri mule developed as a result of many years of selective breeding for qualities such as large size, stamina, longevity, and spirited temperament. The mule is a hybrid of a male jackass and a female horse. European jacks were imported into the United States, especially into Kentucky and Tennessee, in the late 1820s. Two of these animals—Imported Warrior, of Maltese stock owned by Henry Clay, and Imported Mammoth, a Catalonian jack—were large beasts credited with improving the quality and increasing the size of American mules.

During the mid-nineteenth century, stockmen began importing draft horses, especially Percherons, into the United States in an attempt to improve the size and quality of farm horses. At the same time, breeders of racehorses were refining the thoroughbred. Early Missouri mule breeders bred thoroughbreds and Percherons to produce a large, spirited draft horse. When these mares were bred to large Kentucky jacks, the offspring were superior mules.

In the years following the Civil War, Missouri became recognized as the nation’s leading producer of young mules, both because of the quality of the stock and because Missouri breeders won awards for their superior animals. The Limestone Valley Farm herd produced many prize-winning animals, including the 1904 St. Louis World Fair’s grand champion, Orphan Boy, and the two-time Missouri State Fair grand champion and 1915 San Francisco Panama–Pacific Exposition reserve grand champion, Limestone Monarch. Limestone Mammoth, of Imported Warrior and Imported Mammoth bloodlines, won all exhibitions in his ten-year show career. Monsees was the highest money winner at the St. Louis Exposition; his mules garnered more prizes than all other exhibitors combined: fifty out of fifty-three at St. Louis. At the 1915 San Francisco Panama–Pacific Exposition, his herd won thirty-three out of thirty-six prizes.

Monsees, believing that the quality of the jack was dominant in influencing the quality of the offspring, bred jacks with the bloodlines of both Imported Warrior and Imported Mammoth. By the early years of the twentieth century, most of the mules in the United States had bloodlines traceable to Limestone Valley Farm mules.

Monsees was also active in local agricultural and community organizations. A firm believer in scientific methods of farming, he actively supported Pettis County’s efforts to secure a county extension agent. He was influential in establishing the mule show at the Missouri State Fair in 1911, and served as president of the Pettis County Bureau of Agriculture, which was organized in 1912. He was president of the Pettis County Wolf and Fox Hunters Association and a member of Woodmen of the World, the Benevolent and Protective Order of Elks, and the Smithton Methodist Church. He also served as vice president of the American Jack Stud Association.

In the early twentieth century, mules were replaced by tractors, and Missouri’s position as a leading producer of mules declined. Monsees retired in 1935 and spent his remaining years at Limestone Valley Farm, providing advice to breeders and dealers. He died at his home in Smithton on March 10, 1947.