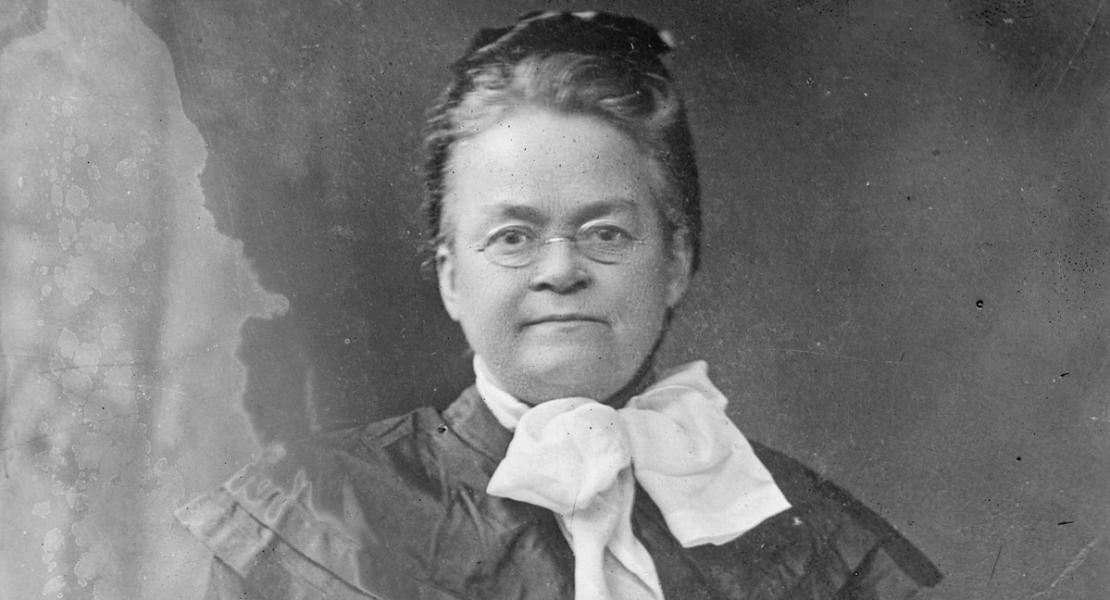 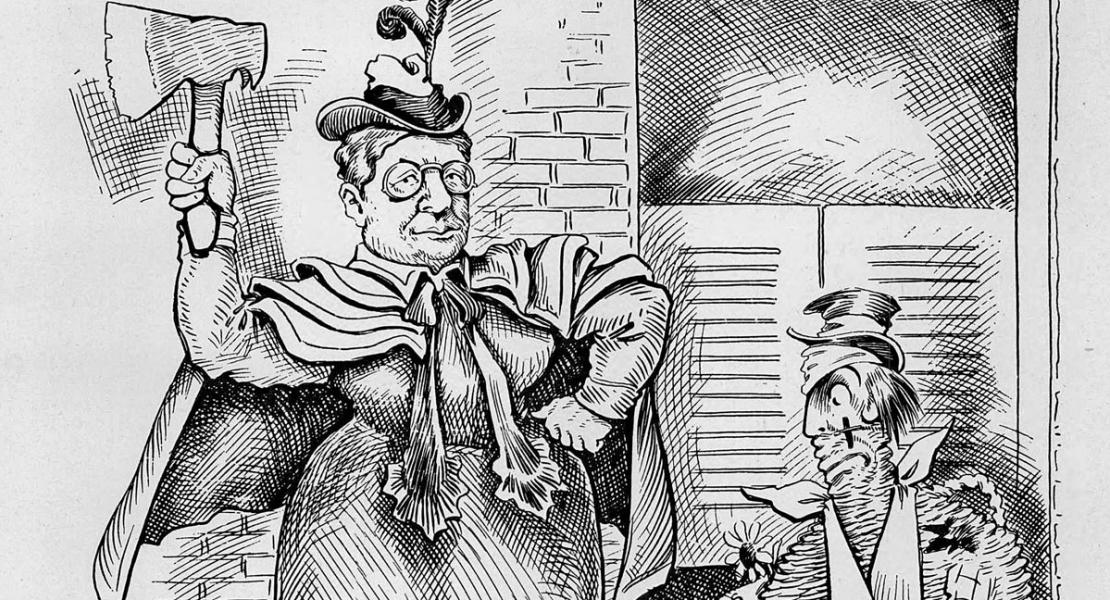 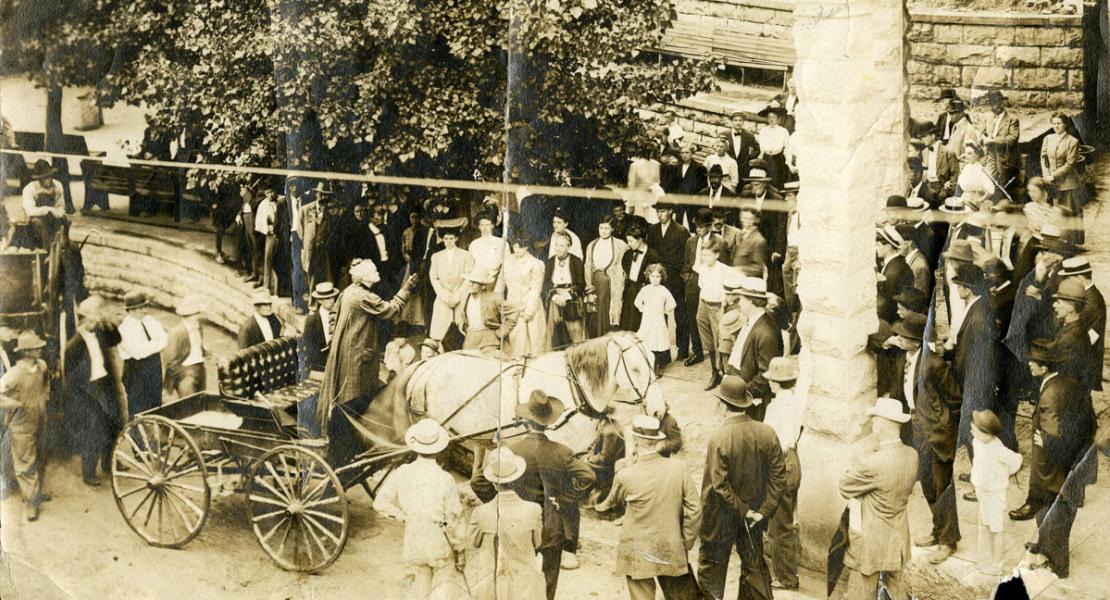 Carry Amelia Moore Nation, an internationally known temperance crusader, was born on November 25, 1846, to George and Mary Campbell Moore. Her father, a prosperous stock trader and farmer, moved his family to numerous counties in Kentucky before migrating to Missouri when Carry was nine years old. Various accounts have attributed these and subsequent relocations either to his roving nature or to his wife’s insanity, since Mary Moore believed herself to be Queen Victoria. Others in her Campbell family were also mentally ill, which has led some to question Carry Nation’s sanity when she began her saloon smashing in the early 1900s.

In 1854 the Moores settled on a farm in Cass County, Missouri, near the town of Belton. In 1862, with Civil War battles close to their farm, Moore moved his family to Texas, where his fortunes dwindled. After a year they returned to their Missouri property. However, the area’s Union military commander ordered all residents of that western region to relocate to Kansas City to undercut support of Confederate guerrillas. In nearby Liberty, Missouri, Carry attended school for about one year. The close of the war brought the Moores back to their farm.

On November 21, 1867, Carry Moore married Charles Gloyd, a young physician who once boarded with the Moores and who practiced medicine in Holden, Missouri. Her parents, having discovered that Gloyd drank heavily, had counseled her against the union. Carry soon learned for herself that her husband was an alcoholic, and, though pregnant, she agreed to return to her parents’ home. Her only child, Charlien, was born on September 27, 1868. Six months later, Gloyd died of alcoholism.

Carry Moore, deciding it was her responsibility to care for Gloyd’s widowed mother, moved back to Holden. After selling Gloyd’s medical instruments, his books, and some property her father had given her, she built a small house for her daughter, her mother-­in-law, and herself.

From May 1871 to July 1872, Carry Moore attended the recently opened Normal Institute in Warrensburg, Missouri, and received a teacher’s certificate. For four years she taught in Holden, but she lost her job when a school board member wanted the position for his niece. Having no way to provide for her family, she prayed for a new husband to support them. When shortly afterward she met David Nation, a widower with a young daughter, she assumed God had sent him to her. Although he was nineteen years older than she and they had little in common, Carry Moore married David Nation on December 30, 1874.

David Nation, a lawyer, preacher, and journalist, was editing a newspaper in Warrensburg at that time, and the family lived there until he decided to move to Texas in 1877. While her husband tried to practice law, Carry Nation undertook the arduous work of operating a run-down hotel in Columbia, Texas. In 1879 she moved to Richmond, Texas, and purchased a hotel there. From the time of her baptism as a young girl in Missouri, Nation was deeply religious; during these years in Texas, she became convinced that she had prophetic dreams and visions.

In 1889 the Nations moved to Medicine Lodge, Kansas, where David Nation accepted a ministerial position. Carry Nation soon became known as “Mother Nation” because of her charitable and religious work. In 1892 she helped organize a local chapter of the Women’s Christian Temperance Union (WCTU), and she served as the jail evangelist. Convinced that alcohol was the basic cause of the inmates’ crimes, and remembering that her own life had been disrupted by an alcoholic husband, Nation decided to take action against the illegal “joints” in Medicine Lodge that openly flaunted Kansas’s prohibition against alcohol—a rarely enforced statute since 1881. In 1899 Nation and Mrs. Wesley Cain closed their first joint by praying and singing hymns inside the saloon, and soon they rid Medicine Lodge of all such enterprises.

On June 7, 1900, believing that she heard a divine voice telling her to “go to Kiowa,” Nation headed for that town. There for the first time she used violent tactics to close the saloons: she hurled bricks at barroom fixtures. In December 1900 she destroyed much of the bar and what she considered a risqué picture in the Carey Hotel in Wichita. The next month in Topeka she began using a hatchet to destroy saloons. Her hatchet wielding quickly brought nationwide attention, but these forays often proved dangerous. She received numerous beatings, and by her own account she was jailed on twenty-­three occasions.

In the summer of 1901 Nation undertook a lecture tour. She also published at various times anti-alcohol papers such as the Smasher’s Mail, the Hatchet, and the Home Defender (a title she gave herself). In 1902 she began her autobiography, which was published in 1904. Perhaps irritated that his wife allowed him no important role in managing her affairs, David Nation divorced her in November 1901.

To support herself, Nation sold miniature pewter hatchets and continued her lectures across the United States. She spoke at universities, where the students, especially at Yale, ridiculed her. She appeared at Coney Island, New York; in New Jersey she even performed in a play titled Hatchetation. In 1908 Nation toured the British Isles with her prohibition message.

In January 1911, while lecturing in Eureka Springs, Arkansas, Nation collapsed onstage. Taken to a hospital in Leavenworth, Kansas, she stayed there until her death on June 2, 1911. As she requested, she was buried next to her mother’s grave in Belton, Missouri. Not until 1924 was a tombstone erected with the following inscription: “Faithful to the Cause of Prohibition. ‘She Hath Done What She Could.’”

Carry Nation’s notoriety created controversy within the WCTU and among other prohibition supporters, who denounced her tactics for bringing ridicule to their cause. However, no other single individual publicized that cause as did Carry Nation. In her self-styled role as the Home Defender, she vividly depicted the ravages of alcoholism. Although she died eight years before Prohibition succeeded, she surely helped pave the way for the ratification of the Eighteenth Amendment.