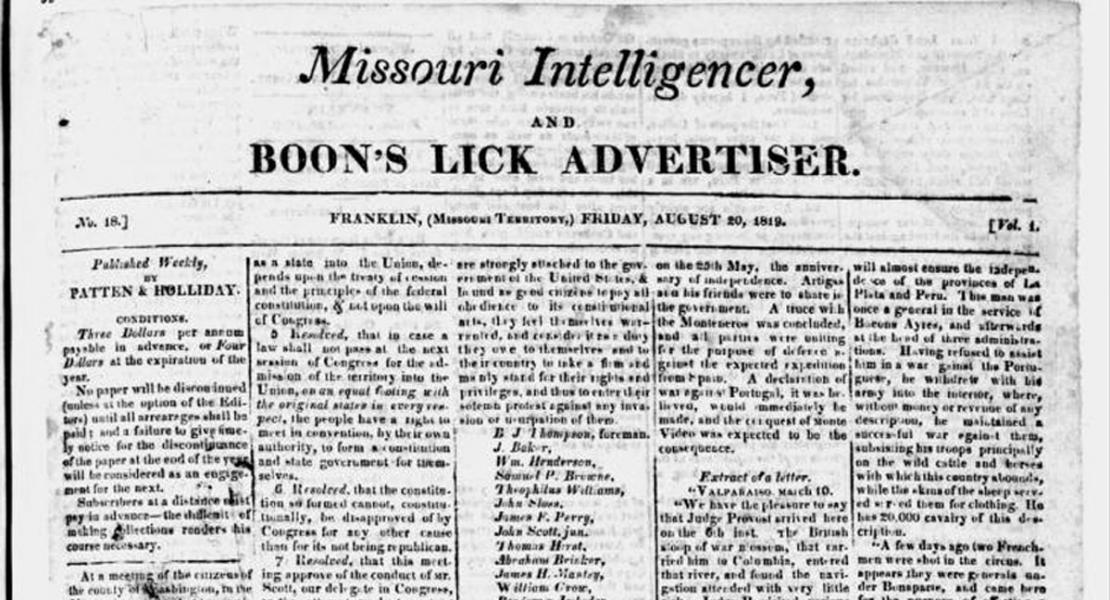 Nathaniel Patten Jr. could be characterized as Missouri’s quintessential pioneer country editor. As proprietor of the first newspaper published west of St. Louis and north of the Missouri River, he has taken his place as the father of journalism for a vast portion of the trans-Mississippi West. His stubborn, uncompromising tenacity in establishing the press in the wilderness, against strong obstacles, allowed his newspapers to reflect the independent Missouri spirit.

Born in Massachusetts on September 9, 1793, Patten apprenticed in the printing trades in Boston while still in his teens. He moved to Kentucky, where in 1814 he established his first independent newspaper, the Winchester Advertiser. He used this paper as a training ground to learn the business of editing and printing a small newspaper with a tiny circulation for a rural audience. This short-lived venture was only minimally successful, and in 1819 Patten moved to Franklin in the Missouri Territory. In that settlement more than one hundred miles west of St. Louis, Patten launched the Missouri Intelligencer and Boon’s Lick Advertiser.

Prior to printing the prospectus for the new journal, Patten apparently formed a sketchy partnership with Benjamin Holliday. Their names appear in the earliest numbers of the Intelligencer as co-owners, but the weight of evidence supports Patten’s claim as the newspaper’s founder. For the next decade and a half, Patten was the guiding light of the tabloid-size Missouri Intelligencer, which became one of the most respected papers in early Missouri.

While adhering to the traditional journalistic principles of truthful and fair reporting intended to enlighten and entertain all readers, Patten also supported a policy offering his subscribers opposing viewpoints on national and local political issues. He used his own progressive attitudes and Whiggish persuasion to make endorsements rather than to attack the political opposition. He faithfully filled his columns with news of interest to mid-Missouri settlers.

The exigencies of managing a newspaper on the frontier may have dictated this cautious stance. Never in good health, Patten’s frail constitution required him to conserve his energy. The uncertainties of supply sources for ink, paper, and equipment to keep his old ramage press in working order, and the unreliability of the mails that brought news from the East, occupied many of his waking hours. Subscribers often paid him in goods and services, and to augment his meager income he assumed the added burden of serving as the local postmaster. Patten, who insisted on staying at the editorial helm with the help of a few well-trained assistants, ran a stable operation.

Patten published the Intelligencer in Franklin for seven years, but dwindling subscriptions and decline in the town’s fortunes led him to move the paper to Fayette, the seat of Howard County. He prospered in Fayette despite the competition from a rural Jacksonian publication, the Western Monitor, edited by James H. Birch.

When the prospect of dramatically increased subscriptions prompted Patten to move his paper to the growing community of Columbia in 1830, the Missouri Intelligencer enjoyed a reputation as a solid journal that offered extensive news coverage in each issue. Patten ranked first among his editorial peers, and his paper was recognized throughout the state for its good management, its typographical appearance and readability, and its editorial and literary style. In Columbia the Intelligencer served as a resource not only for news but also for commentary on a wide array of cultural and educational topics, including literature and the arts.

Ill health caused Patten to enter semiretirement by 1835. After selling his interests in the Missouri Intelligencer to a group of citizens in Columbia, where it continued to appear under various names until the 1930s, Patten established the St. Charles Clarion and Missouri Commercial and Agricultural Register in 1836, his final journalistic effort. His death on November 24, 1837, cut short another highly promising venture, but Nathaniel Patten left a remarkable journalistic legacy in early Missouri as an editorial exemplar who set a high standard for subsequent newspaper publishers.

Brownlee, W. E. “The Literary Editing of Nathaniel Patten Jr., from 1822–1835 in the Missouri Intelligencer.” Master’s thesis, University of Missouri, 1953.