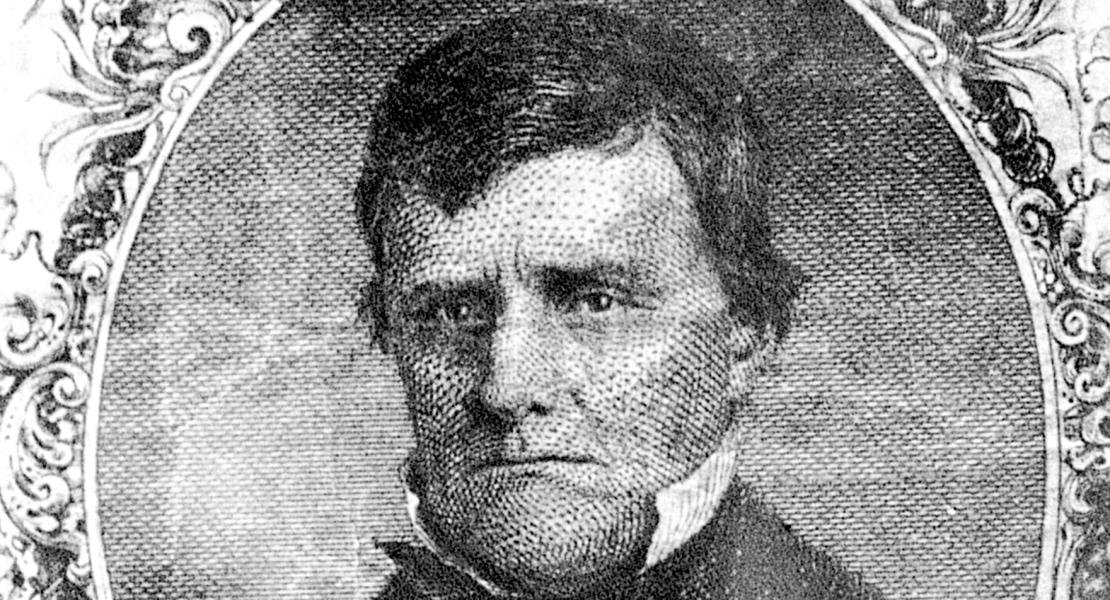 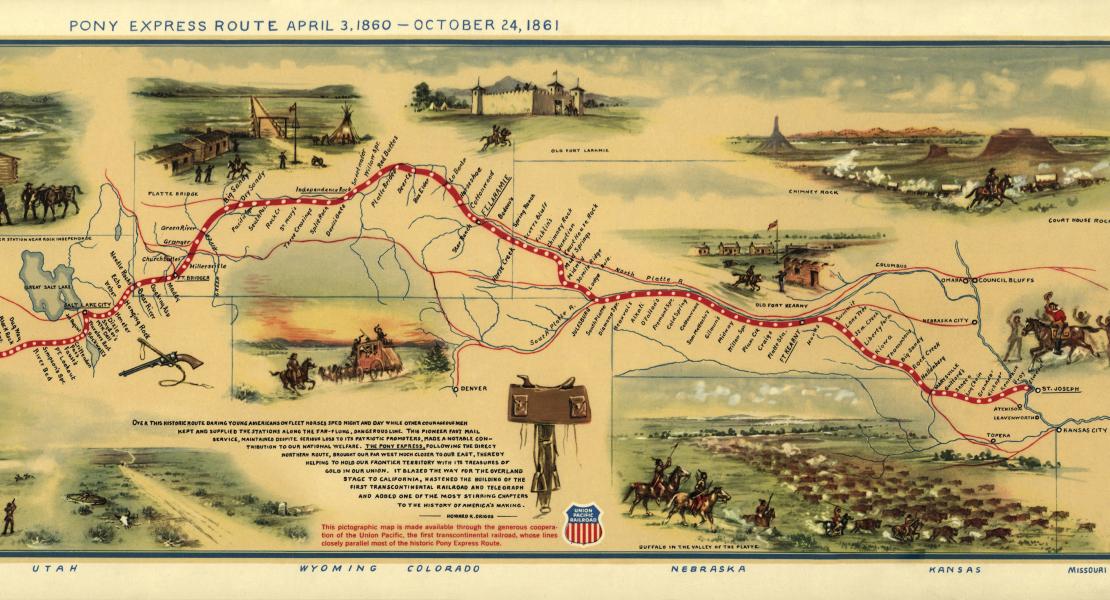 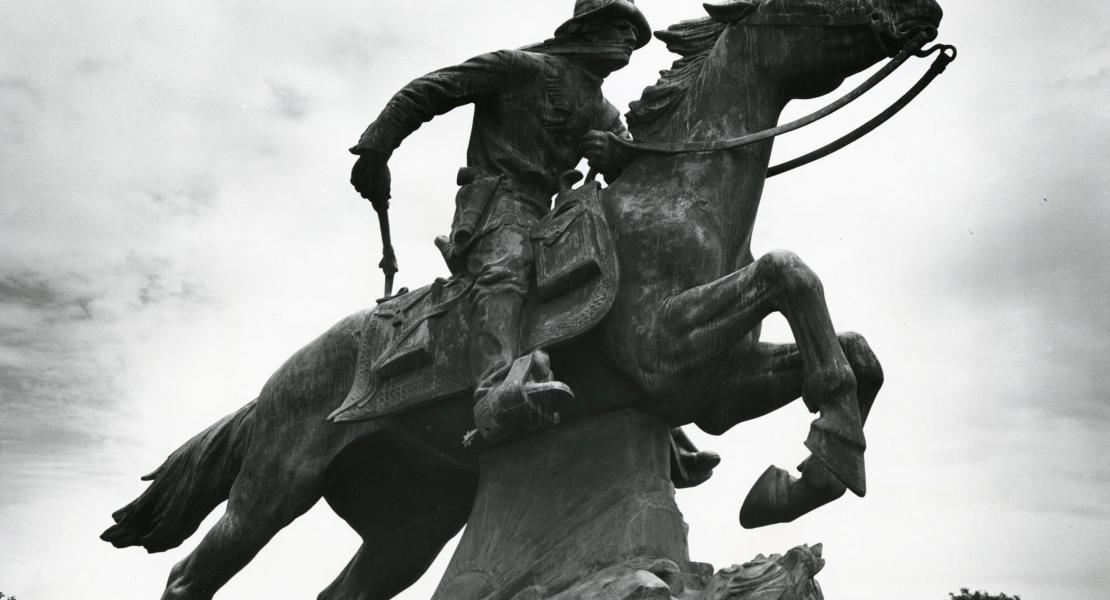 William Bradford Waddell typified the mid-nineteenth-century entrepreneur who shaped the American West through capitalist venture. Although he is sometimes overlooked as a marginal figure in American history, he bears distinction as co-owner of the famed Pony Express. Waddell’s involvement in the conveyance of goods and information across the United States facilitated settlement of the western territories and linked those outlying areas to midwestern commercial centers.

Catherine Bradford Waddell, a descendant of Plymouth Colony governor William Bradford, gave birth to the first of two sons on October 14, 1807, in Fauquier County, Virginia. Named for his famous ancestor, William was also descended from the strong paternal line of John Waddell of Glasgow, Scotland. After Catherine died in 1811, William’s father, John Waddell Jr., married Sarah Crown two years later. In 1815 the family moved to Mason County, Kentucky. Biographers claim that the family’s relocation, which reflected a national fervor for westward migration, influenced William to explore opportunities beyond the cane ridge. At seventeen he briefly worked in lead mines near Galena, Illinois, before moving to St. Louis, where he worked in the Berthold and McCreery general store. This experience particularly influenced Waddell because he glimpsed the profitability of provisioning fur traders and miners for their western journeys. At this point, however, he returned to Kentucky, where he worked briefly in a store in Washington and then as a farm laborer.

The return proved beneficial, for Waddell met, then married, Susan Byram on January 1, 1829. After a few years of farm life, the couple moved to Mayslick, Kentucky, and opened a dry goods store. The business prospered, but by 1835 the Waddells sought new opportunities in Missouri. William built a general store in Lexington, on the Missouri River near Jack’s Ferry. He helped build a viable community in Lexington, joining the Baptist Church, participating in the Lexington First Addition Company, organizing the Lexington Mutual Fire and Marine Insurance Company, and constructing a large brick store and hemp warehouse. The California gold rush of 1849 quickened Lexington’s development because it became a primary outfitting station for would-be miners. During this period Waddell seized his opportunity and formed lucrative partnerships to provision those who ventured across the “Great American desert.”

Beginning in 1853, Waddell joined William H. Russell in many interesting enterprises. The first, carried out under the auspices of Waddell and Russell, fulfilled a contract to deliver military supplies to Fort Riley, in Kansas Territory. This foray launched a shipping and freight business conducted by Russell, Majors, and Waddell, a partnership incorporated on January 1, 1855. The new firm outfitted migrants and wagon trains that crossed the Plains, and transported freight and supplies for the federal government to military posts spanning the western region. Russell primarily lobbied federal officials in Washington, DC, and solicited investors from the New York financial circuit. Alexander Majors had directed a successful wagon train business from Westport, now Kansas City, with offices in Denver and Leavenworth before joining the trio and consequently handled daily operations. Waddell managed the firm’s bookkeeping and financial affairs from Lexington, with occasional trips to a branch office in Leavenworth. The partnership proved to have such potential that Russell sought to diversify its operations.

Unfortunate circumstances, overextension, and financial mismanagement, however, led Russell, Majors, and Waddell to a swift decline. Wagon trains venturing into the Utah Territory became entrenched in the Mormon War of 1857–1858 and the Pah Ute War of 1860. The firm suffered heavy losses of cargo, capital stock, and reputable standing in the competitive freighting business. Russell further burdened his partners with investment in a failed stagecoach line and an express mail delivery service. The partners managed the Pony Express from St. Joseph, Missouri, for a scant eighteen months, from April 1860 to October 1861, while teetering on the brink of financial ruin. Perceptions of Confederate sympathies wounded the Pony Express, and the telegraph killed it. Russell complicated these business losses with financial scandal that dragged the partnership into insolvency.

By incorporating, the partners avoided personal responsibility for the firm’s debts, but creditors hounded them nevertheless. Waddell retired to Lexington and endured Missouri’s intrastate skirmishes during the Civil War. He deeded the family home to his son in 1861, and in 1869 ownership passed to the Lexington Baptist Female College. William B. Waddell lived his remaining years on his daughter’s nearby farm. He died there on April 1, 1872, and was buried in the Machpelah Cemetery.

Although he is most remembered for the famed Pony Express, Waddell played a greater role in the settlement of the West by providing settlers and soldiers with the means to accomplish their goals. His business acumen awakened small Missouri towns to the excitement and profitability of national expansion, briefly unifying an otherwise fractured nation.