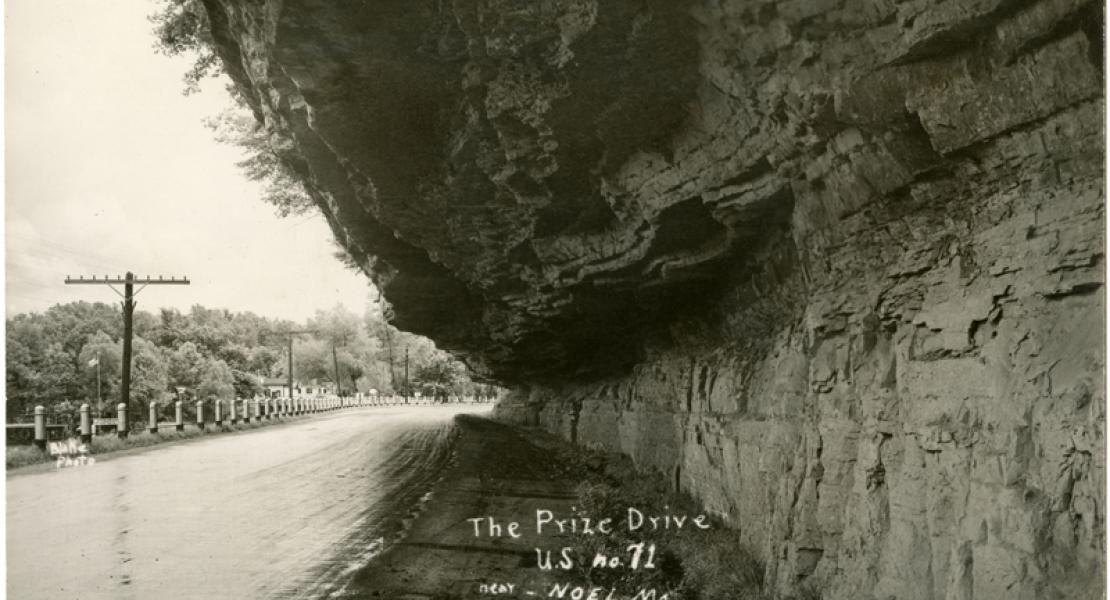 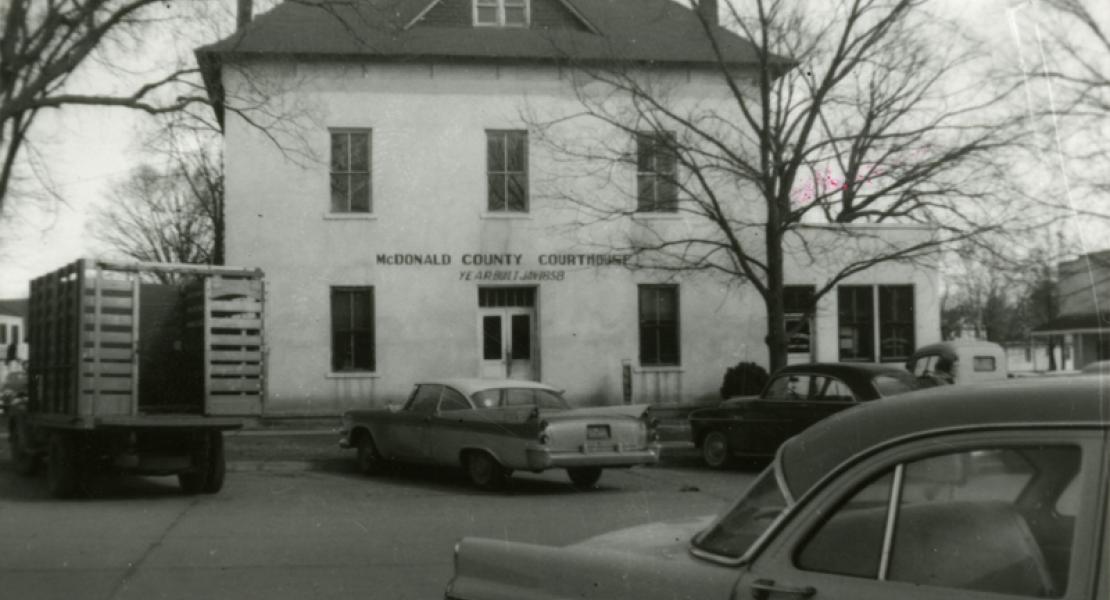 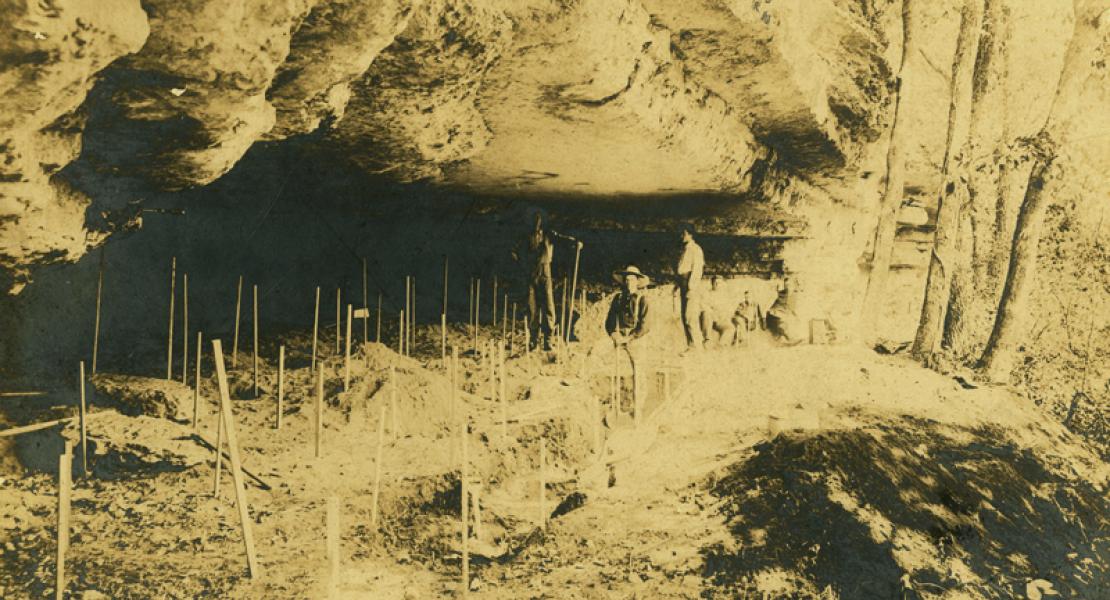 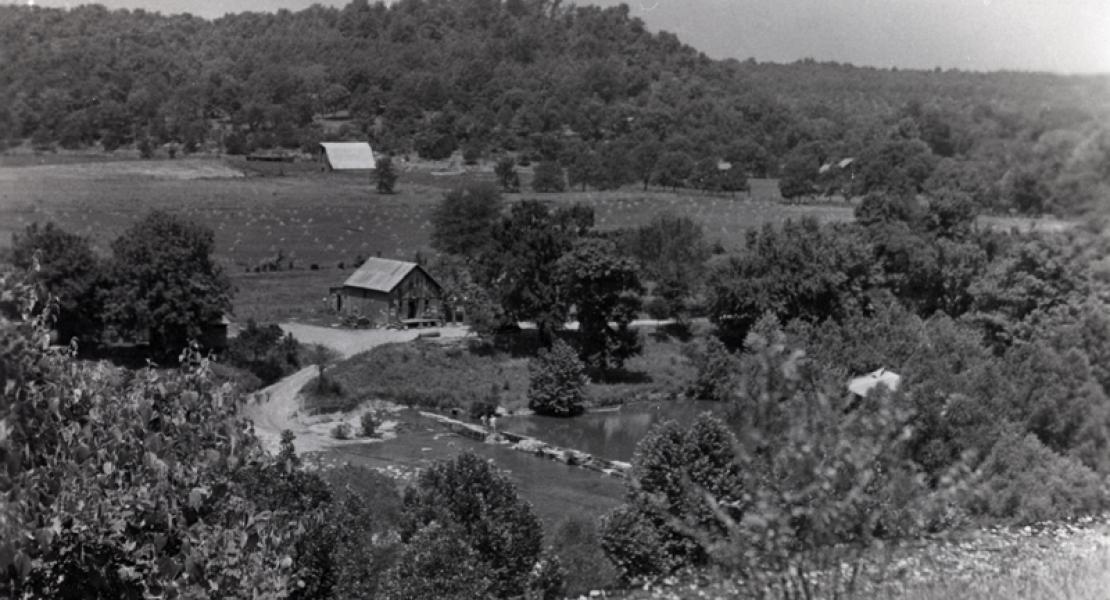 Located in the southwest corner of Missouri, McDonald County borders Arkansas and Oklahoma. Situated within the Ozark Plateau, it is characterized by a mixture of rugged hills, scenic ridges and river valleys, rolling prairie, towering limestone bluffs, and upland forest. The origins of its nickname, “Snake County,” are obscure, but the name may have been prompted by the large number of snakes found in and around the county’s many streams and caves. Although it remains predominantly rural, McDonald County is included in the Fayetteville-Springdale-Rogers, Arkansas, Metropolitan Statistical Area, and serves as a bedroom community for these larger Arkansas towns. Home to Elk River, Big and Little Sugar Creeks, and Indian Creek, it is known for its scenic beauty and tourism industry.

Archaeological excavations have shown that McDonald County has been inhabited by humans for thousands of years. At the time of European contact, the Osage occupied the area.

In 1803 France sold Louisiana to the United States in one of the most significant acquisitions made by the fledgling federal government. The large territory sold included the area that soon became Missouri. Through a series of treaties over the next twenty years, the Osage ceded their land to the United States. During that time, Missouri Territory was formed and admitted to the Union as a state in 1821. By 1830, the Osage had left Missouri. Prior to their departure, settlement of what would become McDonald County was very sparse, but after 1830 the region was slowly populated by immigrants from the Upland South. The first settlers were reportedly Valentine Miller and his family, who arrived from North Carolina in 1827. They were soon joined by others who settled along rivers and creeks. Dry goods were transported to them from St. Louis or Boonville. Much of the land at this time belonged to the federal government and had not yet been surveyed.

During the 1840s and 1850s, the continuous influx of newcomers led to conflict, though the details are still unclear. When settlers claimed a piece of property, they selected a tract of land and marked it with blazes or stakes. Since many of these claims were large and the land remained uncultivated, government surveyors sometimes reported that the land was unclaimed. Newcomers who consulted the General Land Office were informed that the land was available, only to find later that it was already occupied. This led to a series of disputes between early settlers and new arrivals. A vigilante group known as the Slickers was organized to intimidate and harass newcomers who tried to force longtime settlers from their claims. Those who refused to comply were sometimes whipped, forced to leave the county, or made to sign over their land to the original claimant.

Around the same time, settlers began to illegally harvest yellow pine from federal land. Sawmills sprang up all over the countryside to process the timber. In an attempt to enforce law and order in the region, Thomas C. Reynolds, the US district attorney in St. Louis, charged thirty-one men with treason for their role in the “wholesale devastation of the public lands.” Some of those charged included members of the Slickers. Reynolds wrote to Franklin Pierce, the nation’s president, that “the parties proceeded against are the leaders of a regularly organized band of border outlaws, who, under the name of the Slickers, have for several years been the terror of the surrounding country.” Fearing that US marshals would not be sufficient for law enforcement, Reynolds asked the president for mounted federal troops to quell the lawlessness. Although Pierce did not send troops, Reynolds prosecuted many men for timber theft. Much of the pine forest, however, was devastated.

In 1847 the Missouri legislature passed an act to organize Seneca County, but for unknown reasons the act failed. When McDonald County was created two years later, the legislature used the same boundaries originally proposed for Seneca County.

By 1860, the population of McDonald County was 4,038. Of that number, there were 3,957 whites, 9 free blacks, and 72 enslaved individuals. Because of its rugged terrain, the county remained undeveloped, especially in comparison to neighboring Newton and Barry Counties, which had larger slave populations. During the election that year, only three McDonald County residents voted for Abraham Lincoln, while 206 voted for Stephen A. Douglas, 195 for John C. Breckinridge, and 138 for John Bell.

Like the rest of Missouri, McDonald County did not escape the Civil War unscathed. General Sterling Price gathered his pro-Southern troops at Cowskin Prairie, in the extreme southwest corner of the county, prior to the Battle of Wilson’s Creek. During the war years, the county was wracked by guerrilla warfare, witnessed several skirmishes between Confederate and Union forces, and stood in the path of Union and Confederate troops moving between Missouri and Arkansas. Many residents reportedly fled to Texas to escape the chaos, and no school was held from 1862 to 1866.

Post-Reconstruction through the Gilded Age

After the war, McDonald County remained relatively undeveloped because of inadequate roads and the absence of a railroad. Many residents farmed, raised livestock, and grew crops. There were a few distilleries, sawmills, grist mills, and merchants. Educational opportunities remained limited. Southwest City, near the state's border with Indian Territory (now Oklahoma), was established in 1870. Another town, Rocky Comfort, had been founded in the northeast corner of the county in 1866.

Beginning in 1881, a national obsession with medicinal water led to the creation of several health resorts in McDonald County. Indian Springs, Crystal Springs, and Saratoga Springs were among the towns that touted the healing properties of their natural spring water. Visitors from near and far came to take in the waters, but enthusiasm soon faded and the towns were eventually abandoned.

It was not until the mid-1880s that a rail line was established between the town of Splitlog and Joplin, which had become a mining center in Jasper County. Although the original venture failed, speculators sold the line to the Kansas City, Pittsburg, and Gulf Railroad, forerunner of the Kansas City Southern Railroad, which soon served as the county’s sole rail line. This led to the creation of the towns of Anderson, Noel, Lanagan, and Goodman and the rise in local production of cash crops such as apples, strawberries, and tomatoes.

An ongoing national crusade against alcohol hit close to home in 1883 when outspoken temperance advocate Dr. Albert W. Chenoweth was allegedly murdered in Pineville by Garland Mann. Mann was tried four separate times for murder over a period of two years at a reported cost of $10,000. Angered by the expense, a mob stormed the jail in Neosho, Missouri, where Mann was being held, and killed him.

After the turn of the century, enterprising locals opened tourist resorts that attracted guests from places such as Kansas City, St. Louis, and Tulsa, Oklahoma. Pla-Daz Ranch, Shadow Lake, the Riverside Inn, Hilltop Lodge, and Ginger Blue Resort catered to mostly out-of-town visitors who came to fish and relax. Other entrepreneurs, like John A. Truitt, opened show caves. These enterprises were widely publicized thanks to the efforts of regional booster groups such as the Ozark Playgrounds Association. The construction of US Highway 71 in 1926 helped bring a further increase in tourists and commerce. Folklorist Vance Randolph and novelist George Milburn both settled in Pineville at this time; Randolph collected many stories and songs from local residents that he published in his various works.

McDonald County’s scenic landscape attracted outsiders for other reasons as well. In 1938 Jesse James, starring Randolph Scott, Tyrone Power, and Henry Fonda, was filmed in McDonald County. The movie, produced by Twentieth Century Fox, drew thousands of curious spectators. The movie’s financial unit director later claimed that a number of residents threatened to sue Twentieth Century Fox during filming. The disputes were resolved in out-of-court settlements, but studio executives, who did not want any delays in production, were reportedly displeased. Although some locals hoped that Hollywood would produce future projects in the Ozarks, only the second unit scenes for one other film, Belle Starr, were shot in McDonald County.

During the Great Depression, Ed Rousselot, the postmaster of Noel, a town in the southwest part of the county, suggested that customers send their mail through Noel’s post office to get a special “Christmas City” postmark. What began with just a few dozen pieces of mail quickly turned into thousands of mailings. The tradition still continues, with people from around the world sending their Christmas cards and packages to Noel to receive the special stamp on their holiday mail.

In 1941 federal authorities announced the creation of Camp Crowder, a US Army facility built on roughly sixty thousand acres in Newton and McDonald Counties. The arrival of workers and military personnel led to a surge in population in the immediate area.

Although McDonald County had been home to very little industry, that began to change in the mid-twentieth century. One of the most influential industries in the county’s history began in the 1950s when the Ted Sammon Poultry Company opened a facility in Pineville. As the poultry business expanded in neighboring northwest Arkansas and gave rise to industry leaders Simmons Foods, Hudson Foods, and Tyson Foods, McDonald County was swept up in the changes taking place. Simmons, Hudson, and Tyson opened processing plants in McDonald County. While area farmers began contracting with these companies to operate poultry farms, the biggest change came when Hispanic immigrants arrived in the mid-1990s to work in the poultry plants. They were later joined by immigrants from American Samoa, Somalia, Myanmar, and Micronesia, changing the relatively homogeneous county into a diverse one.

On April 3, 1961, McDonald County became the subject of international attention when a group of local boosters announced that the county had seceded from the state of Missouri and formed McDonald Territory. The move was a publicity stunt made in response to the Missouri Highway Department omitting the Noel–Elk River Playground area from the state vacation map. The map also overlooked all but two of the county’s towns as well as eight miles of picturesque US Highway 59 known as “The Prize Drive of the Ozarks.” Residents were already upset because the highway department had rerouted US Highway 71 from Noel, Missouri, and Gravette, Arkansas, to Lanagan, Missouri, and Bentonville, Arkansas. Business owners and civic leaders watched as advertising money was squandered and decided to take action.

Boosters jokingly formed a territorial militia, issued souvenir visas, created territorial stamps, and entertained an offer from Orval Faubus, the governor of Arkansas, to annex McDonald County.  As Ralph Pogue, the longtime publisher of the McDonald County Press and one of the participants, remarked, “The McDonald County Secession fight should not be construed by anyone as a ‘move of animosity’ against the State of Missouri….We aim… to let the State of Missouri and the world know that McDonald County is the finest country in the world.” On April 16, 1961, participants held a mock vote to end the rebellion, but not before it had attracted widespread publicity. Pogue later estimated that it brought “two big years” of tourism to the county.

In the late 1960s Albert E. Brumley, a resident of Powell and a successful gospel composer, created the popular Hill and Hollow Musical Festival. Featuring musicians from the Grand Ole Opry and the television series Hee Haw, it ran until 1993.

In the 1970s the county’s tourism industry entered a new era when canoeing became a popular recreational activity. Thousands of people visit each summer to float Elk River, Big Sugar Creek, and Indian Creek. Big Sugar Creek State Park in the county’s northeast corner offers Ozark glades, woodlands, and rare plants like the Chinquapin tree. Tourism remains a vital part of McDonald County’s economic base, though severe periodic flooding such as the Great Flood of 1993 and the flood of July 2017 create challenges.