The Lynching of James T. Scott 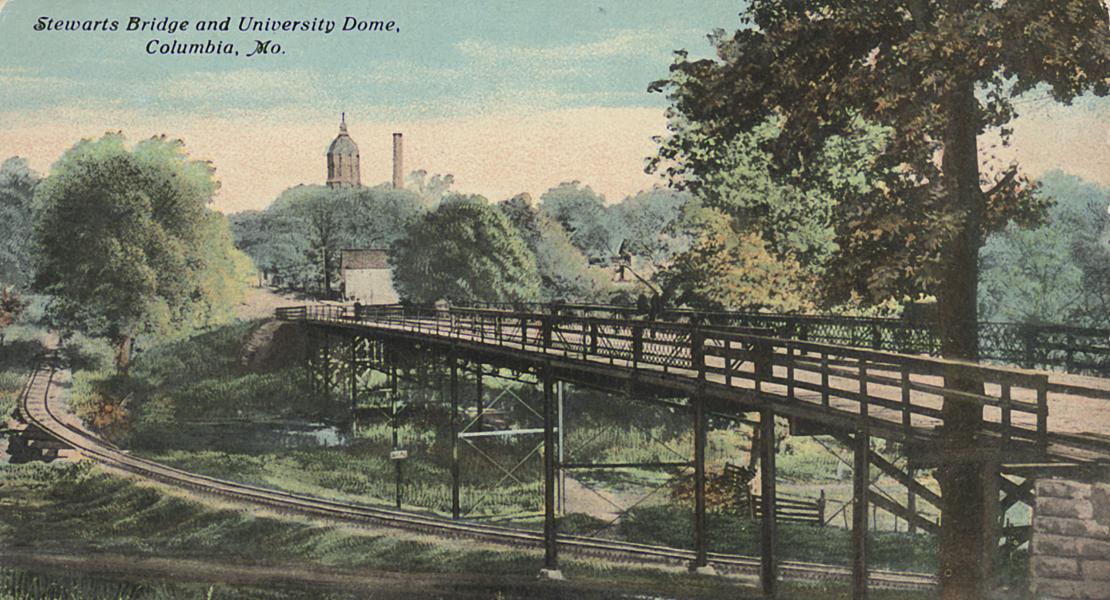 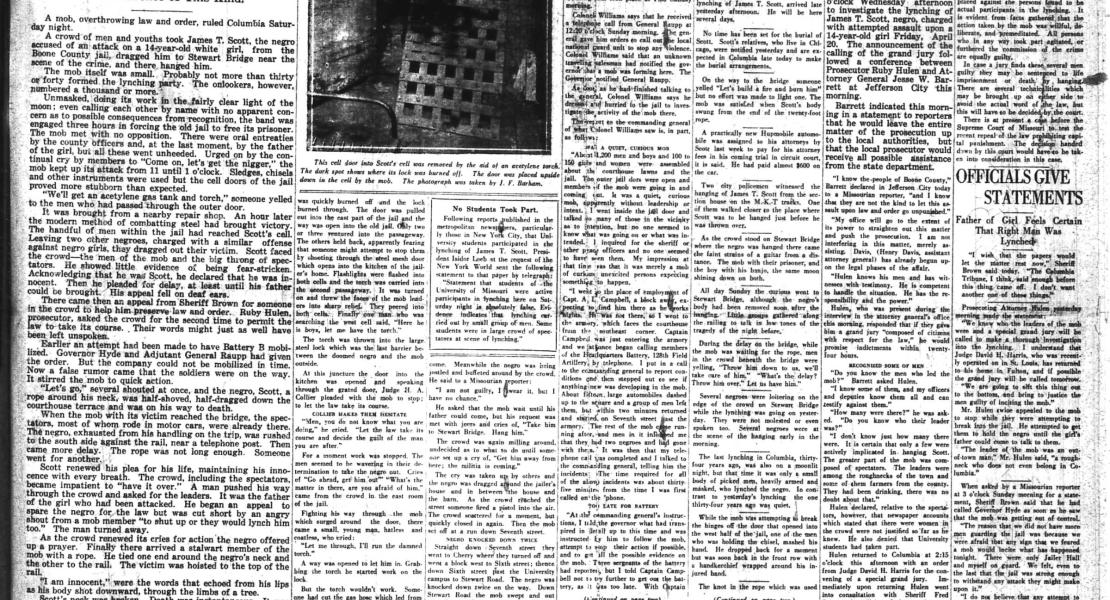 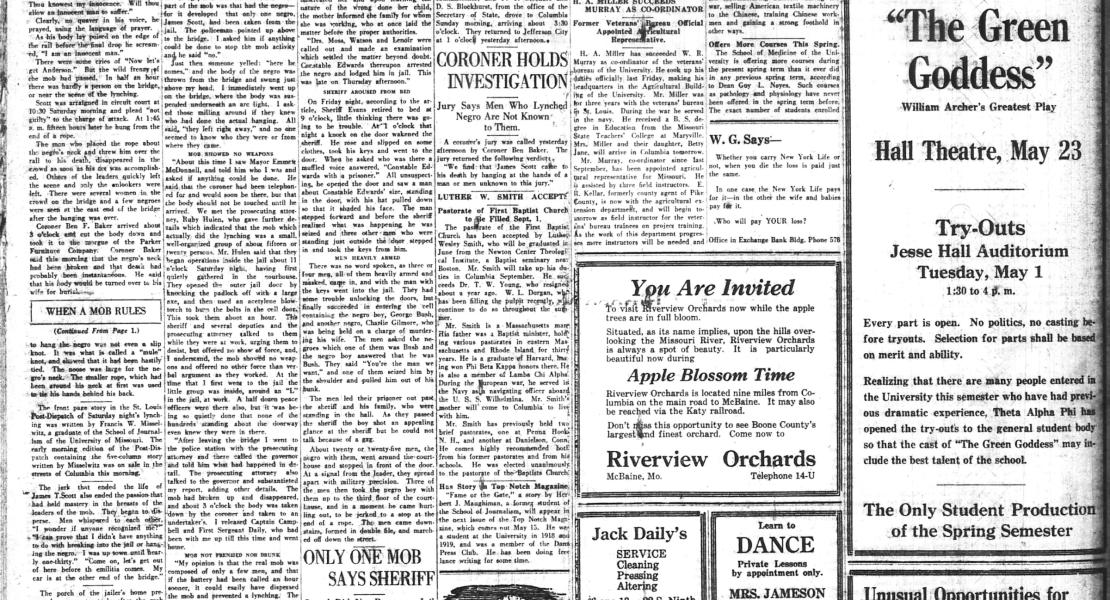 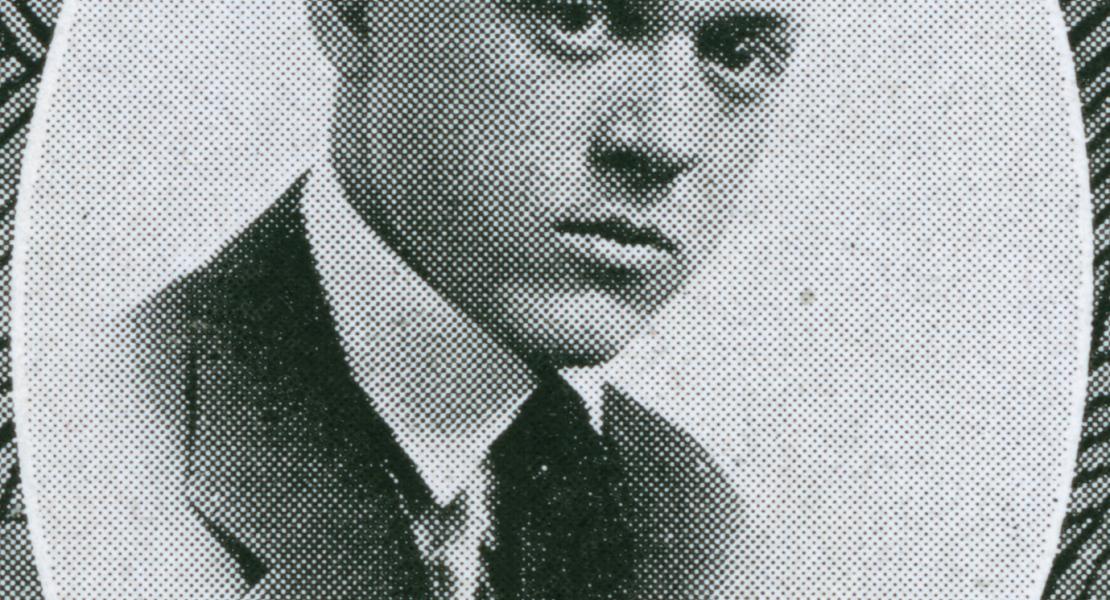 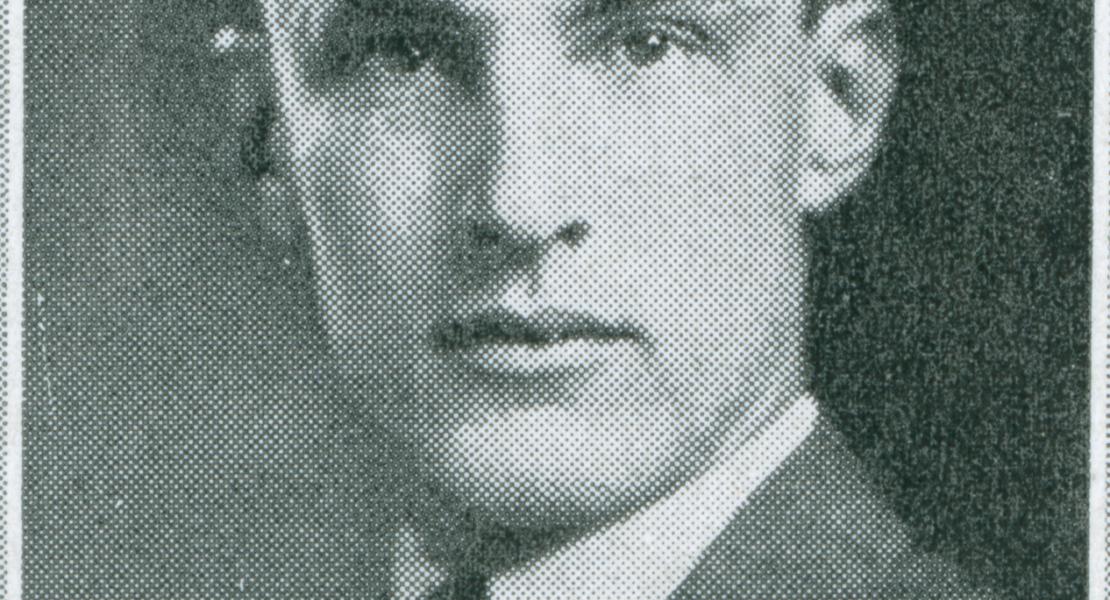 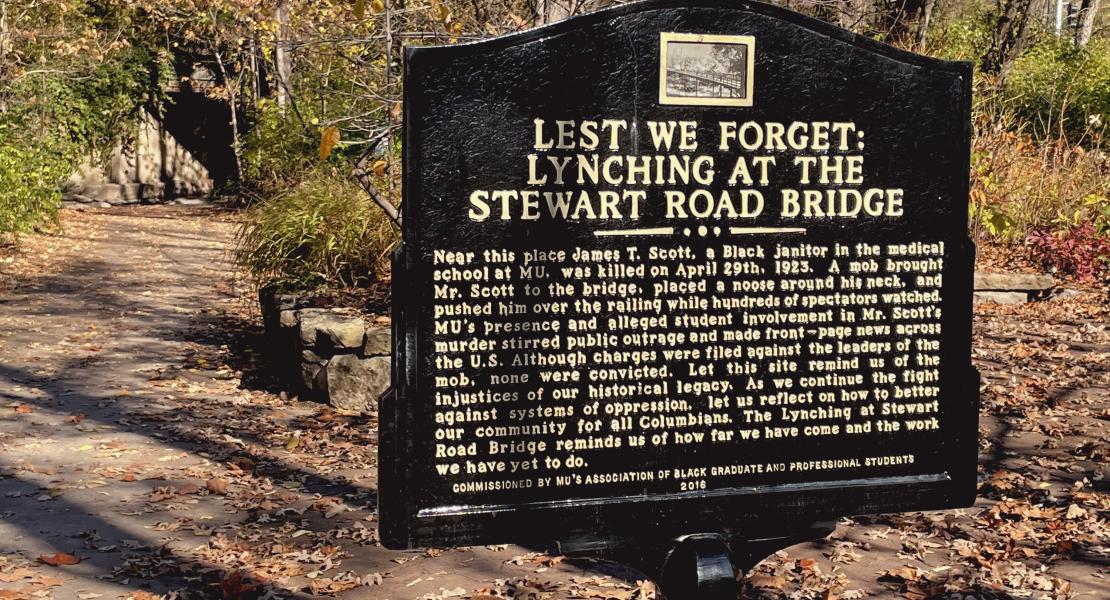 James T. Scott (1885?–1923) was the victim of one of the most notorious lynchings in Missouri history. For many years a resident of Chicago, Scott was a chauffeur, a firefighter, and a National Guardsman. Though records are incomplete, he may have fought with the celebrated 370th Infantry Regiment in France during World War I. After the war, he moved to Columbia, Missouri, where he married Gertrude Carter, an elementary school teacher, and worked as a janitor at the University of Missouri. By August 1922, he was a prominent enough figure in Columbia’s African American community to serve as a marshal of the annual Emancipation Day parade.

On April 20, 1923, Regina Almstedt, the fourteen-year-old daughter of Hermann Almstedt, a German professor at the university, was assaulted while walking across Stewart Bridge on her way home from a music lesson. She described her assailant as a Black man with a Charlie Chaplin mustache. The next day police arrested James Scott and brought him to the curb outside the Almstedt home. Regina, visibly agitated and standing thirty feet away, identified him as her assailant. Six days later, she repeated the identification in a lineup at the county courthouse.

Scott insisted that he was innocent. Advised by his minister, J. Lyle Caston, he hired two experienced lawyers: Emmett Anderson, a former head of the Boone County Bar Association, and George Vaughn, a mainstay of the St. Louis NAACP. Vaughn’s notes on the case indicate that two of Scott’s coworkers at the university, both of them white, were ready to corroborate Scott’s alibi. They had been working with him on campus at the time Regina Almstedt was assaulted.

On Saturday, April 28, however, the Columbia Daily Tribune ran a front-page story declaring that Scott’s guilt was “certain now.” And if Scott’s guilt was “positively proven,” the story went on to say, then “many men of sound judgment” believed “that the taxpayers should be saved any costs that might accrue from a trial and that summary justice should be dealt to him.”

Subsequent news coverage in the Daily Tribune and the Columbia Evening Missourian reported that by 11 p.m. on the 28th, a crowd estimated at four hundred people had gathered on the courthouse lawn. Some of them demanded that Boone County sheriff Fred C. Brown turn over the keys to Scott’s cell, which he refused to do. Some tried to break into the jail through jailor Wilson Hall’s living quarters, but backed off when Hall threatened to kill the first man who passed through his door. Eventually the mob focused its attack on the jail’s steel-grated north door, which they removed with a blowtorch. A few Columbia policemen, including police chief Ernest Rowland, watched; none interfered. County law enforcement officers, including the sheriff, a judge, and the prosecutor, pleaded with the mob, but did not attempt to stop it by force.

When the mob’s leaders emerged from the jail with Scott, a crowd of perhaps a thousand onlookers was waiting on the courthouse lawn. Most of them followed behind as the leaders marched Scott toward Stewart Bridge with a rope around his neck, dragging him when he stumbled or was knocked off his feet. Hundreds of spectators drove to the bridge and were waiting when Scott, bleeding from his nose and ears, was brought to the center of its deck and displayed beneath a streetlight.

While the mob sent for a longer, stronger rope for a hanging, Scott insisted on his innocence, saying that just that afternoon his cellmate Ollie Watson had confided that it was he who had attacked Regina Almstedt. At least two men on the bridge were inclined to believe him. He sounded like a straight talker, they said. There should at least be a proper investigation. Impatient men in the crowd shouted that they wanted to “have it over” right now.

Hermann Almstedt, Regina’s father, stepped onto the bridge deck and pleaded with the mob to allow Scott to have a fair trial: “I have been wounded to the very heart by this affair, wounded far more than any of you. Don’t besmirch your hands with this deed. I plead with you to let the law take its course with this man.” Some in the crowd hissed. “Shut up,” one man warned, “or we’ll lynch you, too.”

A powerfully built man about six feet tall pushed through the crowd with a coil of rope in his hands. He tied one end of the rope to the bridge railing and made a noose on the other end. When he put the noose around Scott’s neck, Scott fell to his knees and prayed, “Oh, Lord have mercy on an innocent man.” The big man lifted him to the railing and the crowd began to shout and cheer. About fifteen feet from him a woman stood on the railing to have a better view, a friend holding her skirt so she wouldn’t fall. “Over the railing with him!” the woman shouted. Balanced on the railing with his hands tied behind him, Scott said that he would jump rather than be pushed.

The big man pushed. As Scott fell, he managed to say one last time, “I am innocent.” The rope caught with a pop audible to spectators; twigs began to snap as Scott’s feet struck the upper branches of a small tree. For a moment there was silence, then Scott’s legs kicked two or three times, convulsively, and ripples of laughter spread through the crowd below.

Racial violence had erupted repeatedly in the South and Midwest in the period after World War I, including both lynching and riots. Nonetheless, the murder of a Black veteran in a college town in front of more than a thousand witnesses was especially shocking. Articles about the Scott lynching appeared in newspapers in New York, Washington, Denver, and Atlanta. In Chicago, W. E. B. DuBois wrote a scathing editorial for The Crisis: “We are glad to note that the University of Missouri has opened a course in applied lynching. Many of our American Universities have long defended the institution, but they have not been frank or brave enough actually to arrange a mob murder so that students could see it in detail.”

In the days after Scott’s death, facts emerged suggesting that Regina Almstedt may have identified the wrong man. On the night he was lynched, Scott had named his cellmate Ollie Watson as Regina’s attacker. Like Scott, Watson was Black. Like Scott, he had worn a Charlie Chaplin mustache that spring, though he had shaved it off about the time the manhunt began. Bloodhounds loosed at the scene of the crime had tracked a scent to the spot where Watson usually parked his taxicab. And, crucially, overwhelming evidence indicated that Watson had raped Ernestine Huggard, a fifteen-year-old Black girl, just a week before the Almstedt attack.

Although a grand jury issued indictments against five men suspected of being members of the mob, only one, George Barkwell, was tried for murder. A downtown business owner and former city councilman, Barkwell was a man likely to be recognized wherever he went in Columbia. He was a striking figure, powerfully built and about six feet tall. Several witnesses placed him on the scene the night of the lynching, always near the center of the action, and he made no attempt to deny that fact.

When the trial came, two student reporters for the Missourian testified against Barkwell. One of them, Foster Hailey, had perched atop Scott’s cell the night of the lynching and testified that he had seen Barkwell standing at the front of the mob and assisting with the blowtorch as the cell’s lock was being cut away. Barkwell’s face had been clearly visible when the torch was lit, Hailey testified, and other men present had called him by his name.

The other reporter, twenty-year-old Charles Nutter, gave what would seem to be compelling testimony. He said that he, too, had seen Barkwell’s face clearly at the jail that night and heard someone call him “George.” He had then made his way to Stewart Bridge and had been standing right next to James Scott when “Barkwell came rushing in with a one-inch rope.” Nutter had seen Barkwell “put the rope around Scott’s neck, lift him to the bridge railing and push him over.” He was completely certain that Barkwell was the man with the rope because his face was clearly visible under the streetlight in the center of the bridge. He had heard a bystander call Barkwell by his last name. To be certain of his facts, he had double-checked both the first and last name with yet another bystander, and he had reported the name to a police officer soon after the lynching.

But three Columbia men, all of them friends of Barkwell, testified that they had been with him on Stewart Bridge that night, and that he had done nothing like what Nutter had reported. Barkwell, they said, had been standing on the north side of the bridge deck when someone else threw Scott off the south side. Chief among these alibi witnesses was banker W. Emmett Smith, a well-known figure in the town, active in civic organizations, and a former Exalted Ruler of the Elks Lodge.

In his closing argument to the jurors, Barkwell’s attorney George Starrett did not hesitate to raise the question of perjury. Someone, he said, was clearly lying. Who were they going to believe? Nutter, Starrett said, was “one of these newspaper reporters who . . . feed on publicity.” Smith was “one of our best citizens.” The choice was obvious: “I’d rather trust a man I know than a man I don’t know. I’d rather believe W. E. Smith than a whole basketful of Nutters.” Then, despite strong objections from prosecutor Rubey Hulen, Starrett reminded the jurors that James Scott had been lynched because he had been accused of a “fiendish crime.” During their deliberation, the jurors should bear in mind that “a white girl” had been “ravished and despoiled.”

The jury deliberated for only eleven minutes before pronouncing Barkwell not guilty. After the verdict, he was surrounded by citizens eager to shake his hand. Hulen immediately dropped charges against the other four defendants. That evening groups of men walked the streets of Columbia singing and laughing and shouting a call-and-response cheer: “Isn’t George Barkwell, ALL RIGHT? / George Barkwell is ALL RIGHT!”

For decades after Barkwell’s acquittal, the lynching was seldom discussed in public or in print. In 1991, this long silence was broken with the publication of an article by Patrick Huber, who had researched the crime while an undergraduate at the University of Missouri. Other researchers and writers soon followed, adding depth and detail to our understanding of the crime and the racial climate of the town in which it happened.

In 2010, Reverend Clyde Ruffin convened a group of Columbians eager to increase public awareness of the lynching and to place a commemorative monument on Scott’s grave. On May 7, 2011, hundreds of citizens gathered at the Second Baptist Church for a solemn ceremony of remembrance, then marched through the streets to the Columbia Cemetery to dedicate that monument.

On September 30, 2016, the Association of Black Graduate and Professional Students at the University of Missouri unveiled a commemorative plaque titled “Lest We Forget.” The plaque stands near the MKT Nature and Fitness Trail, rooted in the soil where hundreds of witnesses stood on the night of the lynching. It briefly describes the event and encourages passersby to consider both “how far we have come” in the struggle against racism and “the work we have yet to do.”

Doug Hunt is associate professor emeritus of English at the University of Missouri.

———. Summary Justice: The Lynching of James Scott and the Trial of George Barkwell in Columbia, Missouri, 1923. Charleston, SC: published by author, 2010.