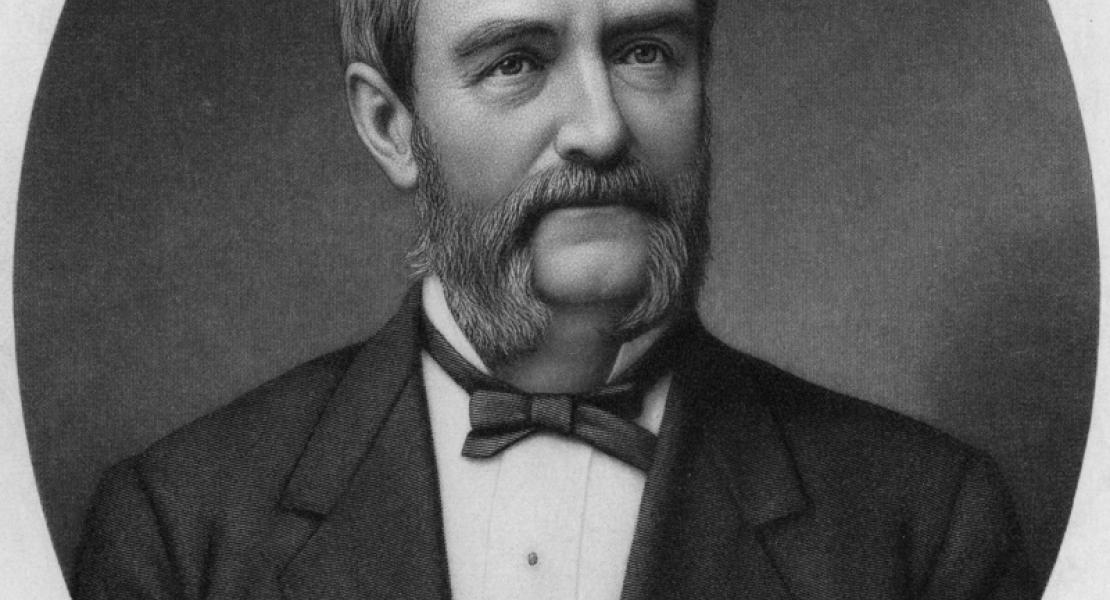 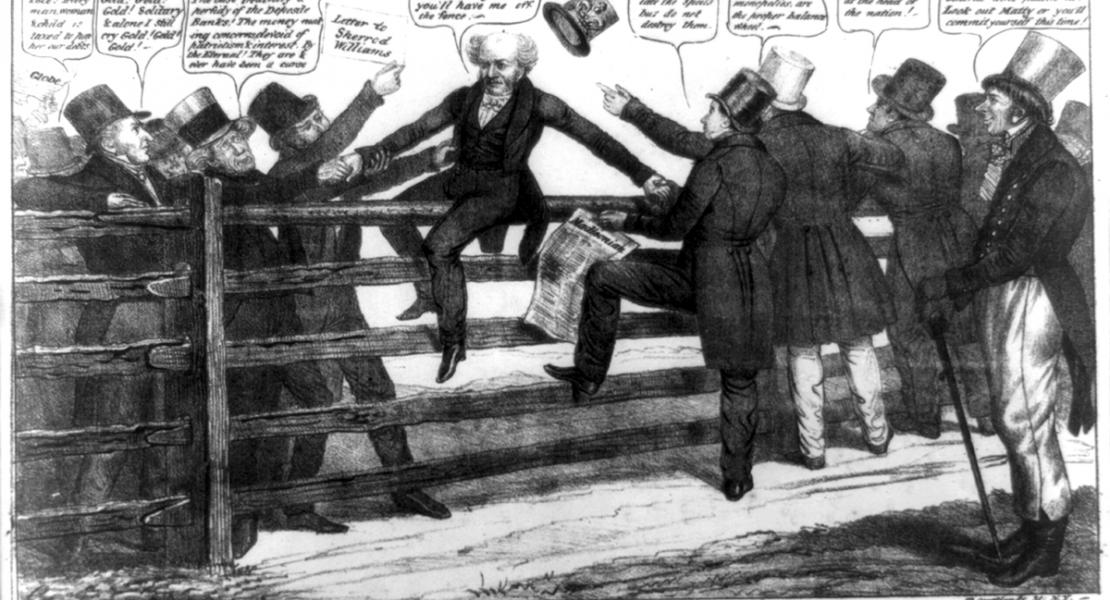 Thomas Allen was among the most prominent and powerful individuals who led St. Louis in its transition from commercial outpost to industrial metropolis. Best known for his political service and for his leadership in establishing the Pacific Railroad, Allen played an equally important role in the development of St. Louis land during the city’s most rapid period of growth. Perhaps more significantly, Allen’s career bridged the period when the city’s fortunes rested in the hands of a small group of locally prominent citizens to the era of corporate control, in which personal power was based on connections to national finance and influence.

Allen was born in 1813 in Pittsfield, Massachusetts, a town to which he would return throughout his life. Early biographers emphasized the prominence and status of his father’s family, which had resided in Massachusetts since the seventeenth century. At the same time, however, Allen is portrayed as a man who built his own fortunes. His father, having suffered a series of business reversals, was said to have given the young Allen twenty-five dollars, telling him, “Go and take care of yourself.” In spite of his privileged origins, then, Allen would later claim, “I also started at the bottom of the ladder.”

Allen left Pittsfield for Union College in New York, then studied for the bar in Albany. In 1832 he moved to New York City, where he found a livelihood not in the practice of law but in publishing. He edited Family Magazine and also compiled and published a digest of state laws. With the small stake he had acquired from these ventures, he moved again four years later, to Washington, DC.

It was in Washington that a combination of professional ambition and political good fortune elevated Allen to national prominence. An early supporter of the new administration of Martin Van Buren, he became, after the panic of 1837, one of the president’s most outspoken critics. His prominence in the political scene was obtained largely through his position as the editor of a new journal, the Madisonian. This job also allowed him to secure the printing contract for the House of Representatives from 1837 to 1839, and for the Senate in the three years that followed. With his professional standing and his rhetorical skills, he quickly endeared himself to Van Buren’s Whig opponent in 1840, William Henry Harrison.

Allen remained close to the short-lived president, and was allegedly present at Harrison’s deathbed. He supported Harrison’s successor, John Tyler, but left Washington (and the Madisonian) a short time later, in 1842. This move proved the most important of his young career.

Why Allen came to St. Louis is unclear. He may have envisioned more room for his political ambitions outside the tightly drawn circles of Washington; he may simply have longed for the adventure of a life on the frontier. In any case, he arrived in the spring of the year, and within months had found personal happiness and, for the first time, lasting financial security. Both came in the person of Ann Russell, whom Allen married in July of the same year.

Allen’s new father-in-law, William Russell, had come to the city just after the American takeover to serve as the new government’s land surveyor. In the course of his work, he had acquired vast amounts of land in his own right, much of it surrounding his home on the southern edge of the city. In bequeathing this land to his son-in-law, Russell obligated Allen to provide Ann with an annual income from the property. Allen proceeded to develop the rolling prairie around the family estate into an even grid of streets, blocks, and house lots. Either selling these lots outright or renting them through long­term leases, Allen developed much of the area from the Carondelet Road (now South Broadway) west to Jefferson Avenue, between Soulard Market to the north and Benton Park to the south. Much of this land, which was soon closely built and heavily populated by working-class immigrant families, remained in his possession until his death. At the time, it represented the largest tract of property in St. Louis to be developed by a single person.

When not surveying and developing his lands, Allen devoted his early years in St. Louis to the craft of political pamphleteering, always in the interests of himself and his adopted city. In one work he excoriated American delinquency in affirming French and Spanish land grants in the former Louisiana Territory (his own claim to the Russell property rested on the security of several such grants). In another, Allen called on the federal government to spend more toward making navigable the country’s inland waterways.

The accomplishment with which Allen will forever be most closely identified, however, was his successful advocacy of a different kind of federal improvement: a transcontinental railroad, headed west to California by way of St. Louis. In 1849, writing in anticipation of the great railroad convention held in the city that year, Allen made his claim for “a Western route to Asia,” along “a CENTRAL HIGHWAY that shall be most useful and most acceptable to all parts of our country. With the support of Thomas Hart Benton, Allen—elected president of the new Pacific Railroad in 1850—traveled across the state, as well as east to New York and Washington, in pursuit of support for the venture. After his election as a state senator, also in 1850, he engineered government loan guarantees and land grants that put the fledgling company on its feet. In addition to the originally planned route from St. Louis to Kansas City, he oversaw the opening of a southwestern route, which opened up the mining regions west of the Ozarks for widespread commercial exploitation.

In 1854 the railroad suffered the first of what would become a recurrent series of financial crises, and Allen was implicated in public rumors of board mismanagement. He offered his resignation on the eve of a St. Louis County bond issue designed to offer emergency relief to the company. The bonds were approved, but Allen had lost his key place in the railroad’s development.

Allen returned to his land-development business, dabbled in banking, and ran, unsuccessfully, for Congress in 1862. In 1867 he reentered the railroad business, but his sights were now set closer to home than on the grandiose “Western route to Asia” that had first inspired him. In the Iron Mountain Railroad, Allen saw a route, nearly as old as the Pacific, that reached south into a trade territory not yet tapped by rival transportation centers such as Chicago. Within five years he had extended the road beyond its original terminus in the area of Iron Mountain all the way to Texarkana. His enterprise took on ever greater proportions as he absorbed first one and then another line into the Iron Mountain system, until by 1874 Allen conglomerated his holdings into the St. Louis, Iron Mountain, and Southern Railroad.

By the late 1870s Allen, extremely wealthy and secure in his financial ventures, had once again begun to consider a return to Washington. In 1878 he returned to his old craft, political pamphleteering, to publicize his positions. Most were unsurprising for a man of his station: he warned of “the spirit of discontent and revolution” brewing in America’s cities, he advocated keeping the Chinese in Asia and returning American blacks to Africa, and he proposed to economically colonize Mexico and “make it our own.”

Allen was elected as the Democratic representative to Missouri’s Second District in 1880. The following year, as he began his term, he sold his railroad holdings to Jay Gould and erected the Southern Hotel in downtown St. Louis. If his capacity for spending and making money seemed undiminished, his health did not. By the time of the election, Allen had begun to feel the effects of what was later described as cancer of either the stomach or the bladder; his condition deteriorated sharply after he came to Washington.

Like his early patron, William Henry Harrison, Thomas Allen’s term in the capital was cut short. He died on April 8, 1882, and his body was returned to his hometown of Pittsfield for burial. The persona he had encouraged in life—of a tireless and dedicated public servant—was eagerly taken up after his death; Allen’s eulogizer reported that he had died murmuring: “I would like to live a few years longer. There are some things I would like to do for Missouri.”

History of the Pacific Railroad, from Its Inception to Its Final Completion. St. Louis: Democrat Book and Job Printing House, 1865.