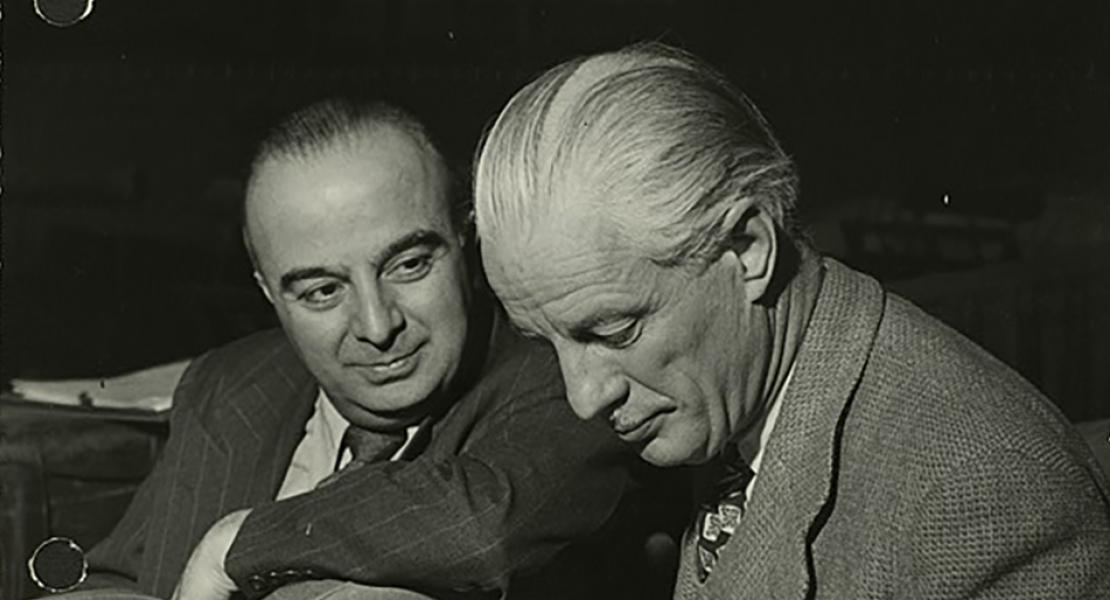 Robert Russell Bennett was born on June 15, 1894, in Kansas City, Missouri, the only son of George Robert and Mary Bradford Bennett. Both parents were of Yankee stock going back to the early colonial era. His mother was a descendant of an early governor of Plymouth Colony, William Bradford. Both parents were musical: his father played the trumpet and violin in the Kansas City Philharmonic, and his mother was a piano teacher.

At the age of three, Bennett demonstrated an aptitude for music, surprising his mother by playing a Beethoven sonata he had heard. His parents were responsible for much of his musical education. At four years of age, Bennett contracted polio, and to aid in his recovery the family moved to a farm south of Kansas City. Bennett’s father extended his son’s musical education during this period by teaching him most of the band instruments.

The family moved back to Kansas City in 1909, where Bennett continued his musical education. He studied composition with the Danish American musician Carl Busch and played violin in the Kansas City Symphony and third base for a local ball team. In addition to these activities, and to help support himself and his musical studies, he played piano in movie houses, theater pits, and dance halls.

In 1916 Bennett went to New York, where he found employment in a variety of musical activities, including a job as copyist for the music publisher G. Schirmer. When the United States entered World War I in 1917, Bennett joined the army. He was assigned to organize and conduct army bands and to score musical arrangements. After the war ended, he returned to New York, where he married Louise Merrill. In 1919 he was hired by the firm of T. B. Harms to orchestrate theatrical songs. Bennett continued to study privately and in 1927 received a Guggenheim Fellowship. Accompanied by his wife and daughter, Beatrice, he went to Paris to study with the famous Nadia Boulanger. While there he studied alongside several Americans, including Aaron Copland, Roy Harris, and Marc Blitzstein. Bennett spent the next three years in Paris, London, and Berlin. During this period he composed the Abraham Lincoln Symphony and the tone poem Sight and Sound.

After Bennett returned to the United States in 1931, he entered a symphonic contest sponsored by RCA Victor. He shared the prize of $25,000 with two other contestants. Encouraged by his success, Bennett committed himself to further composition as well as a career as a scorer and arranger. During his career, he established a reputation in both popular and serious music. He created an impressive number of compositions, including the operas Maria Malibran and The Enchanted Kiss, numerous works for orchestra, pieces for band, chamber music for various ensembles, concertos, and orchestrations, and original music for more than thirty motion pictures and many major television programs.

Bennett’s greatest fame came as Broadway’s leading arranger of musical-comedy scores. Between 1926 and 1960 he scored some three hundred shows. He created arrangements for every important composer on Broadway, including George Gershwin, Cole Porter, Rudolph Frimil, Richard Rodgers, Fritz Loewe, and Jerome Kern. The shows included Show Boat, Carousel, Oklahoma, South Pacific, My Fair Lady, The Sound of Music, Porgy and Bess, and Carmen Jones. He had as many as twenty-two different shows appearing at the same time.

During the latter part of the 1930s, Bennett worked in Hollywood, where he scored or composed original music for numerous films, notably The Hunchback of Notre Dame, Rebecca, and the musical Swingtime. In 1955 Richard Rodgers undertook a commission from NBC Television to provide continuous musical background for twenty-six half-hour installments of a documentary on the US Navy in World War II, called Victory at Sea. Rodgers asked Bennett to collaborate with him on the project. The series proved highly popular, and an RCA Victor recording of the show, arranged and conducted by Bennett, became a best-selling record. His work on Victory at Sea earned Bennett the appointment as musical director for the NBC network. In 1975 he published a book on orchestration, Instrumentally Speaking.

A frequent visitor to Kansas City, Bennett’s last visit was in 1977 to receive an honorary life membership in the University of Missouri–Kansas City Alumni Association. Bennett was a member of the American National Theater and Academy and the National Association of Authors, Composers, and Conductors. Despite the great acclaim he won in New York and Hollywood, he remained a Kansas Citian at heart. He died in New York on August 18, 1981.