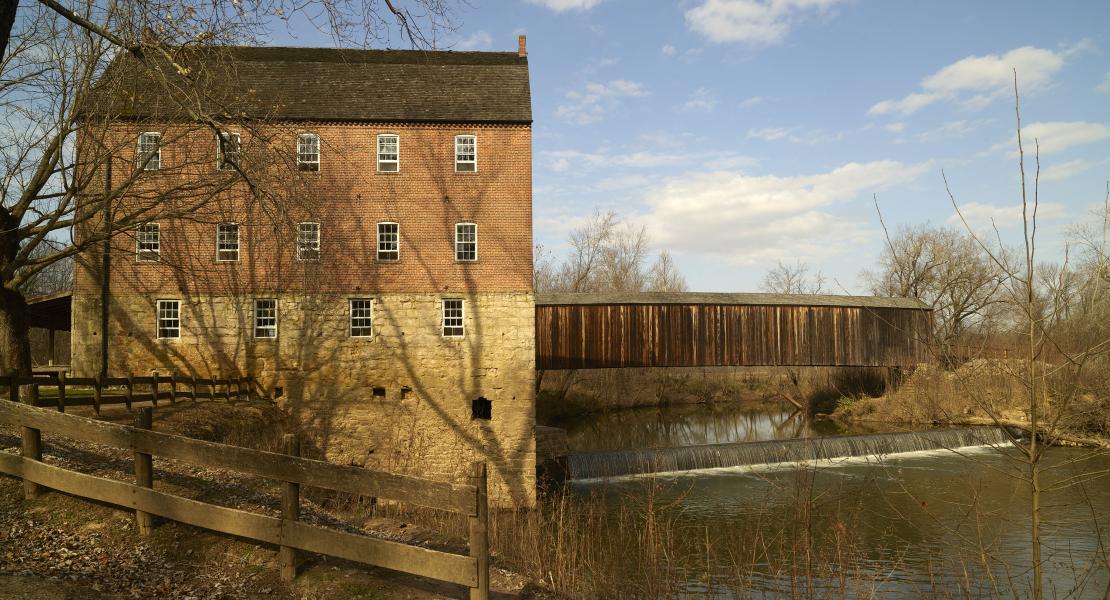 A group of German-Swiss immigrants landed in Philadelphia in 1710 and settled in southeast Pennsylvania. In 1768 some moved south to western North Carolina, where George Frederick Bollinger was born in about 1771, one of twelve children. His father was a Revolutionary War veteran. As a young man in his mid-twenties, Bollinger and a friend explored the trans-Mississippi in the Cape Girardeau District. He negotiated a Spanish land grant from Louis Lorimier upon the condition that he bring a colony of settlers to the Whitewater River.

In January 1800, Bollinger’s group of twenty families, each receiving several hundred acres, moved to the Spanish territory, to what became known as the “Dutch Settlement” on the Whitewater River. Bollinger’s land lay along the river near what is now Burfordville. His wife died before reaching the settlement; they had only one child, Sarah.

After the transfer of the territory to the US government in 1804, Bollinger built a log dam, a log mill, and a blockhouse. He persuaded a German Reformed minister in North Carolina to join his group on the frontier. Two men enslaved by Bollinger helped produce the agricultural crops and cared for the livestock. In 1806 Bollinger was one of the first assessors to levy taxes for the Cape Girardeau District.

When Missouri became a second-class territory in 1812, Bollinger was elected as a member of the new territorial assembly. He served several terms, helping to establish local governments, including judicial circuits, and founding new counties. Residents of newly created Madison County honored him in 1819 by naming the county seat Fredericktown. Territorial governor William Clark appointed him lieutenant colonel of the Fourth Regimental Militia, a position of leadership that he had earlier enjoyed as militia captain along the Whitewater.

Citizens elected Bollinger to the new Missouri State Senate in 1820, and again in 1828 and 1830; he was also elected a state representative in 1826, 1834, and 1838. Bollinger’s political passion even led to a conviction for assault and battery upon a fellow politician from Cape Girardeau County in 1824.

Bollinger and his extended family accumulated substantial property holdings along the Whitewater. His success allowed him to send his daughter Sarah back to Salem, North Carolina, for schooling at the Moravian Academy. In 1819 Timothy Flint visited Bollinger’s Dutch Settlement and recorded his revulsion at so many domestic distilleries and at the prevalence of homemade liquors. Flint concluded, however, that the Germans worked hard, had productive orchards, built solid buildings and fences, and dramatically improved the land.

Bollinger’s mill symbolized the community’s success in processing grain, including the making of flour, and creating carding facilities for wool. To these he added a distillery and a blacksmith shop, and in 1825 he renovated and further improved the mill, which lay along a primary road from Jackson westward to Greenville. By 1830 the work was performed by thirteen people enslaved by Bollinger, in addition to six free Blacks who resided in his household. During the 1830s the number of those enslaved almost tripled. As Bollinger’s resources increased, so did his purchases of land in the region.

By the time of his death on September 23, 1842, Bollinger had achieved political and economic success as a frontier entrepreneur and had realized his goals of founding a new society with a promising future for his descendants. His Whitewater properties were flourishing, and he owned several hundred acres near his mill, on Hubble Creek, on Byrds Creek, and in three other Missouri counties. His livestock holdings in horses, cattle, and sheep were impressive. He left all this and more than thirty-five slaves in trust for his daughter, Sarah.

In 1851 Missourians honored him again with the organization of Bollinger County. Bollinger and the efforts of his neighbors are today memorialized at the Bollinger Mill State Historic Site at Burfordville.