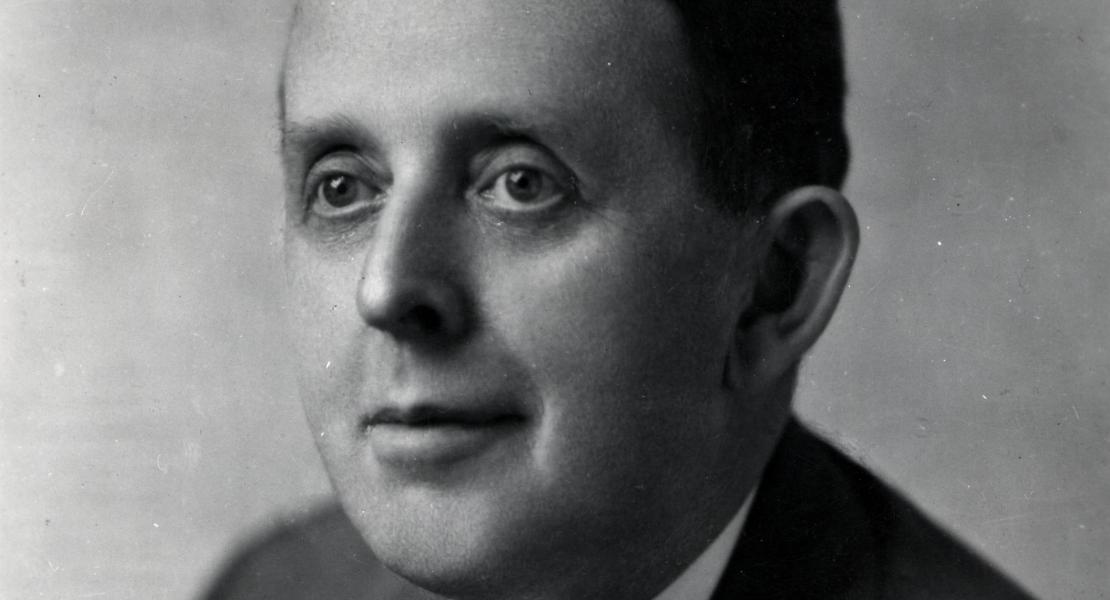 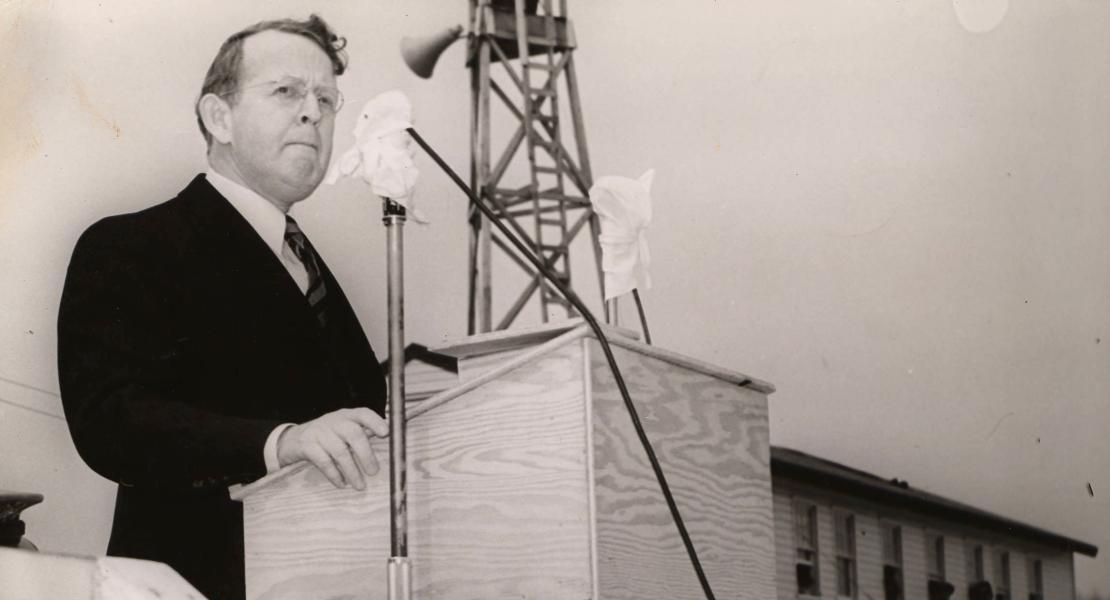 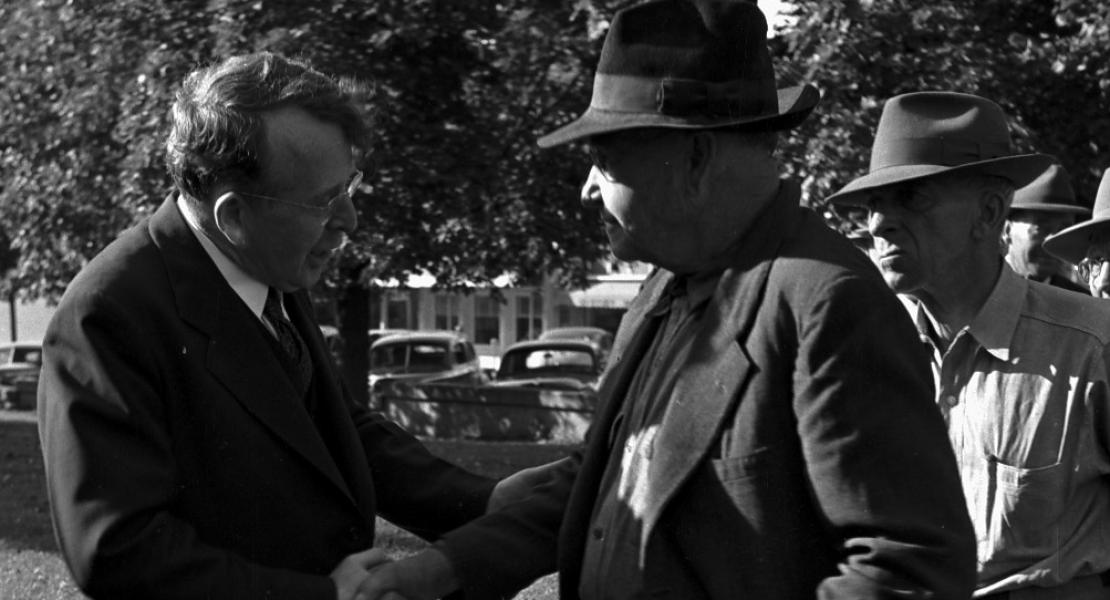 Born in Quitman, Missouri, on August 20, 1884, the only child of dry-goods operator John Cary and Barbara Lee Waggoner Donnell, Forrest C. Donnell attended private school at Cameron before graduating from Maryville High School in 1900. He then earned BA (1904) and LL.B. (1907) degrees from the University of Missouri. A child prodigy encouraged by his mother, he excelled as the valedictorian of each of his graduating classes and became a member of Phi Beta Kappa, the Order of the Coif, and the Missouri bar. From 1907 until 1940, save for an appointment as the attorney for Webster Groves, he practiced law as a partner in a succession of St. Louis firms and served on several American Bar Association committees. He appeared every bit a barrister: dignified in manner and dress, nearly six feet tall, of medium build, with slightly curly, reddish hair.

On January 29, 1913, Donnell wed Hilda Hays of St. Louis, who gave birth to a daughter, Ruth, the following year and a son, John Lanier, in 1918. Raised a Presbyterian, Donnell deferred to his wife’s faith and taught Sunday school at Grace Methodist Church. He presided over the Missouri Sunday School Council of Religious Education, as well as a local evangelistic union, and served as a state delegate to the General Conference of the Methodist Church. His secular commitments included service to the Missouri School for the Blind and the State Historical Society of Missouri. Later, as a thirty-third-degree Mason, he led the state lodge.

Perhaps because his father served as mayor of Maryville, Donnell showed an interest in politics. Instead of following the family’s southern Democratic heritage, however, he actively campaigned in 1908 for Herbert S. Hadley, the Republican Party’s first post-Reconstruction governor of Missouri, and led the state’s Young Republicans eight years later. Originally influenced by Theodore Roosevelt, Donnell eventually became more conservative. His Republicanism was reinforced by Seldon Palmer Spencer, who recruited him out of law school, became his first partner, and was elected a US senator in 1918.

Throughout the 1920s and 1930s, Donnell succeeded in the boom-bust economy and, particularly during the Great Depression, served the community. Suddenly, in 1940, he became the Republican Party’s gubernatorial nominee opposing his former Sunday school pupil and Democratic machine-backed candidate Lawrence McDaniel. Equally ironic, according to his daughter, Donnell had been recommended for the candidacy by another catechism student and friend: baseball executive Wesley Branch Rickey. Widely known through his public service, Donnell defeated three primary candidates easily.

Although few gave him much chance of beating the party of Franklin D. Roosevelt in a perennially Democratic state and in a presidential election year, Donnell stunned McDaniel in the general election. He won by only 3,613 votes, benefiting from an antimachine campaign that divided the Democratic Party and brought him statewide support. Democratic leaders, fearful of a Republican Party rebirth through gubernatorial patronage, charged voting irregularities and moved to deny—the press said “steal”—Donnell’s victory. Hence, the Democratic Speaker refused to announce Donnell’s election officially, and the Democratic majority in joint session voted to investigate the election, despite opposition from their own outgoing governor, Lloyd Stark. Donnell, in turn, requested that the Missouri Supreme Court order the Speaker to fulfill his constitutional duty, which it did unanimously. Despite this verdict by Democratic judges, McDaniel conceded only after a recount disclosed that the governor-elect had received even more votes than officially recorded.

Throughout these proceedings, which seemed especially repugnant because Democrats had won all other state executive offices and retained control of the state legislature, Donnell acted the statesman. Inaugurated on February 26, 1941, more than six weeks after the official date, he presented an ambitious program. Ironically, he failed to pass much of it even after fellow Republicans took control of the Missouri House and an equal share of the Senate in 1942. He advanced a state merit system, a secret-ballot measure, and a bipartisan administration for the liquor-control department; he brought state unemployment compensation in line with federal social security regulations; and he backed higher salaries for legislators. He also supported marriage laws requiring blood tests and waiting periods. However, Donnell failed to convince lawmakers of benefits derived from infusing the state social security system with matching federal dollars; his initiatives for civil service reform and public disclosure of committee votes also languished.

Nor did Donnell actively promote the history-making Missouri Constitutional Convention, which occurred during the second half of his administration and became law shortly after his departure from the governorship in 1945. Like other incumbents of both parties, including US senator Harry S. Truman, Donnell questioned its partisan impact. Politically, he drew his core support from rural voters opposing constitutional revision and, philosophically, he challenged prospects of enlarged governmental power.

Donnell’s record revealed problems wrought by World War II, personal philosophy, and party politics. He spent much time on the international crisis, creating a state defense council that he chaired. He benefited from a boom economy that stimulated military production and created surplus revenues, yet limited the building of much-needed public projects. And, amid these concerns, he reacted forthrightly to both the lynching of Cleo Wright in Sikeston and the efforts to defuse racial tension in St. Louis. As significant, Donnell’s legalistic, meticulous style and opposition to patronage slowed legislative and party-­building initiatives, while Barak Mattingly, state leader of the Republican Party, advanced his own personal power at the expense of party unity.

Still, in 1944, Donnell’s popularity and voter dissatisfaction with his opponent carried him into the US Senate. Unable to succeed himself as state executive, Donnell campaigned against Roy A. McKittrick, who as attorney general had endeavored to deny Donnell the governorship four years earlier; Donnell benefited from voters remembering the “steal” and his tempered response to it, and from a series of gambling-house raids that hinted at the persistent corruption of machine politics. Again he triumphed by a minuscule margin, despite opposition from Mattingly in the primary and token support from party workers in the election.

Perhaps surprising to those aware of Donnell’s more liberal gubernatorial positions, he identified with “conservative” Republicans on national issues. He admired Robert A. Taft, whose father he had voted for in 1912 and whose own presidential candidacy he supported in 1948 and 1952. In the younger Taft, he found an influential statesman and shrewd political leader who shared his own beliefs in “equal justice under the law,” equal opportunity, and individual freedom.

Hence, Donnell voted for the Taft-Hartley Act (1947) and similar antilabor measures, while supporting lower income taxes and opposing an excess ­profits tax. He, like Taft, proved moderate on social issues, endorsing public housing and federal aid to education (excluding parochial and private schools). Similarly, while initially and privately struggling with Joseph McCarthy, Donnell soft-pedaled McCarthyism (though on one occasion he reportedly permitted sponsors of a rival bill to be labeled Communists). He shared further the Ohio senator’s unilateralism in foreign affairs, which dated back to his opposition to the League of Nations. Small wonder that Donnell joined Taft to oppose the North Atlantic Treaty Organization (1949) and most foreign aid.

Donnell continued his lifelong opposition to patronage and voted against President Truman’s appointment of cronies such as Democratic National Committee chairman Robert Emmet Hannegan for postmaster general. Doubtlessly, he delighted in casting one of only two dissenting ballots—the other being Taft’s—against the former St. Louis party leader who had been involved in the “governorship steal.”

Nonetheless, Truman Democrats had the last laugh: Thomas C. Hennings Jr. defeated Donnell by 92,593 ballots in 1950. Despite the campaign appearance of Senator McCarthy, Donnell became the only incumbent Republican senator to lose that year. He refused to press the anti-Communist issue to his advantage, perchance because he—like Hennings, who attacked McCarthyism—respected civil liberties. His other beliefs were out of step with numerous voters—often union members or Black—who recalled his antilabor positions, forgot his housing-education commitment, and disagreed with his unilateral position in the Cold War. Nor did his refusal to perform individual favors or indulge visiting delegations ingratiate him with constituents. Unwilling to leave Washington before the Senate adjourned, he never overcame the campaign lead that Hennings mounted or the charge of being too conservative. Equally important, Donnell again lacked strong backing from his own divided party and neglected to exploit the reform that brought him into office.

Donnell was a capable executive and hardworking senator. Yet he never sought control of the party apparatus, and he failed, like most Missouri Republicans, to cultivate urban voters or address changes wrought by the Depression and World War II—a major reason he was the party’s last governor and US senator until the 1970s. Donnell was more a constitutional lawyer and public servant than a political leader or party regular. A man of “relentless integrity,” he followed his conscience; an outsider, he symbolized political honesty and the hope of Republican Party resurgence. Donnell, who neither drank, smoked, nor swore, practiced law almost until he died from pneumonia, on March 3, 1980, at the age of ninety-five.