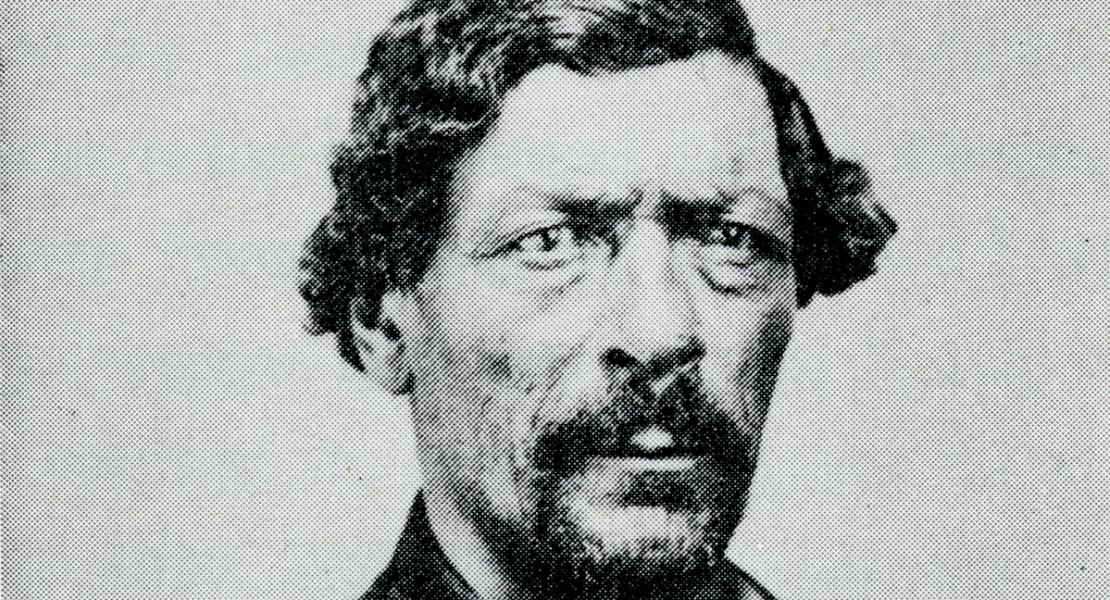 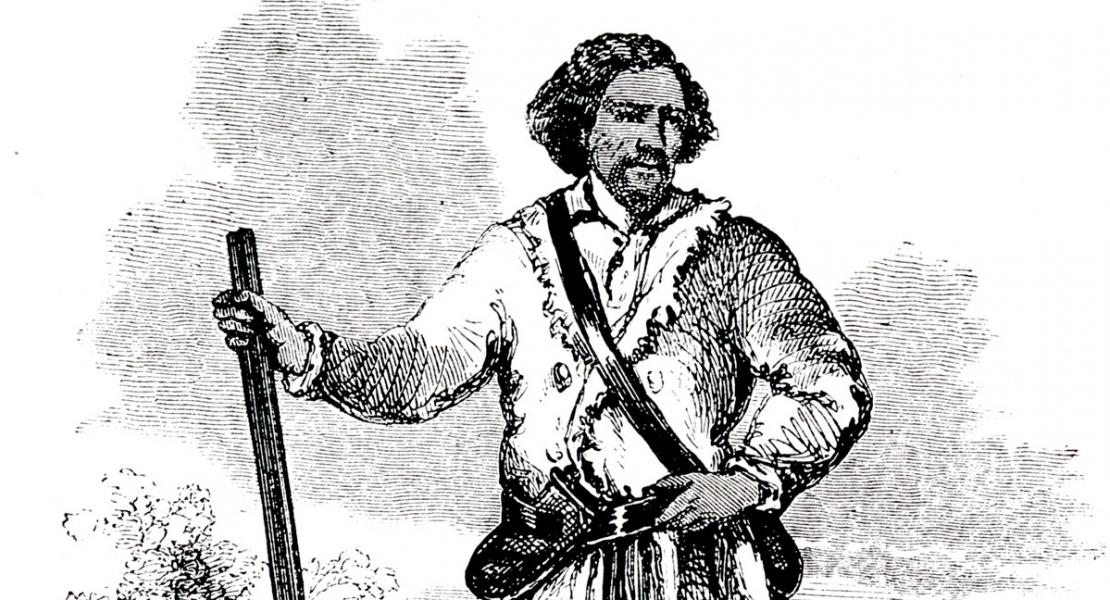 James Pierson Beckwith, better known as Jim Beckwourth following the publication of his autobiography, was a notable African American fur trapper, mountain man, army scout, and pioneer settler. Beckwourth, the son of Jennings Beckwith and an unidentified African slave woman, was born in Virginia, probably Frederick County, on April 26, 1798. The elder Beckwith moved his family to the Louisiana Territory sometime prior to September 1809. The next year he purchased land in the isolated backwoods near Portage des Sioux, in the District of St. Charles, perhaps in an attempt to give his biracial progeny greater opportunities.

Although Beckwourth was born a slave, his father did not treat him as one. He sent the lad to St. Louis for schooling when he was about ten years old, and during the two years that he studied there, Jim learned to read and to write legibly. Young Beckwourth served a brief apprenticeship with blacksmiths George Casner and John Sutton, but he abruptly left their employ in 1819 following a dispute. In 1822 he worked at the mines at Fever River (later Galena), Illinois, before setting out for New Orleans on a steamboat, probably as a deckhand.

After contracting yellow fever in New Orleans, Beckwourth returned home to recuperate, but by then he had acquired the wanderlust that claimed so many pioneering Americans. In 1824 he signed on as a member of the overland trapping expedition that William Henry Ashley was organizing. Prior to Beckwourth’s departure, his father appeared in a St. Louis court to execute a deed making his son’s emancipation official. When Beckwourth set out for the fabled Rocky Mountains with Ashley’s party, he did so as a free man. After a difficult winter journey during which expedition members endured privation and traveled through deep snowdrifts, they reached the vicinity of Greeley, Colorado, where Beckwourth first learned to trap in frozen streams. The Ashley expedition proceeded northwest to the Laramie Plains, crossed the North Platte River, and traversed the Continental Divide before reaching the Green River. After spending two months trapping in that region with a party headed by James Clyman, Beckwourth attended the 1825 trade fair and rendezvous on Henry’s Fork. That event, along with his experiences in the mountains, convinced Beckwourth that trapping was the life for him.

He left St. Louis in 1824 as a hired hand and returned a year later as a confirmed mountain man. Following a brief visit with his family, Beckwourth enlisted as a free trapper with Ashley’s new field partner, Jedediah Strong Smith, and set out once again for the West. After Ashley sold his interest in the Rocky Mountain trade to Smith, William Sublette, and David Jackson, Beckwourth worked for them as an independent trapper until 1829. In that year he decided to join the Crow people, and for the next seven years he called their villages home. During that time, he learned their language and customs, took several Indian wives, adopted a preference for Indian dress, won standing as a Crow leader, and traded with the American Fur Company. But ten years of trapping and trading in the mountains was enough for Beckwourth, who was ready to try something new. When he returned to St. Louis in 1836, he found himself a stranger in a much-altered city and learned that his family had moved from the area.

Seeking new opportunities, he traveled to Florida to work for the US Army as a civilian employee during the Second Seminole War. Beckwourth served as a muleteer, express rider, teamster, and assistant wagon master, and he was present at the Battle of Okeechobee on Christmas Day in 1837. He tired of life in the Everglades and returned to St. Louis, where Louis Vásquez and Andrew Sublette employed him to join their trading operations with Indians on the southern plains.

Beckwourth set out for the American Southwest via the Santa Fe Trail in the summer of 1838. During the next decade he traded with the Cheyennes, participated in a successful horse-stealing raid in California, joined with other families in establishing a settlement at Pueblo, Colorado, fought in the California Revolution of 1845, operated a hotel in Santa Fe, served as a guide, interpreter, and messenger for the US military, and assisted the American forces in suppressing the Taos Revolt in 1847.

Following the discovery of gold in California, Beckwourth joined the Forty-Niners who flocked there seeking their fortunes, but he spent more time working as a trader and a guide than as a prospector. He guided overland travelers into California through the Beckwith Pass, which he had discovered in 1851, and occupied himself variously as a hotelman, merchant, and rancher. While in California, Beckwourth met Thomas D. Bonner, a colorful itinerant justice of the peace and onetime New England journalist who agreed to record and publish his autobiography. That work, The Life and Adventures of James P. Beckwourth: Mountaineer, Scout, and Pioneer, and Chief of the Crow Nation of Indians, first published in 1856, brought fame and attention to Beckwourth. It was Bonner who changed the spelling of Jim’s surname from Beckwith to Beckwourth.

Beckwourth, now renowned as a storyteller, left California in 1858 and headed back to Missouri, where his presence attracted mention in Kansas City and St. Louis newspapers. His old friend Louis Vásquez hired him to be his firm’s agent-trader in Denver. While serving as a storekeeper in the Colorado city, Beckwourth also acted as the local Indian agent. He occasionally worked as a guide for the military and was present at the infamous Sand Creek Massacre in 1864. Shortly thereafter, Beckwourth left Denver, serving briefly as a US Army scout before returning to the Crow villages, where he died probably in late October 1866.

In death, Beckwourth failed to achieve the recognition he rightly deserved, largely because of his race. Historians and others who wrote about the West branded him a “gaudy liar” and sought to discredit his accounts as mostly fabrication. While it is true that as a storyteller Beckwourth, like most of his contemporaries, embellished his tales with exaggeration, modern historical research has demonstrated that his recollections were for the most part factual and sustained by the evidence.

Bonner, T. D. The Life and Adventures of James P. Beckwourth: Mountaineer, Scout, and Pioneer, and Chief of the Crow Nation of Indians. New York: Harper and Brothers, 1856.