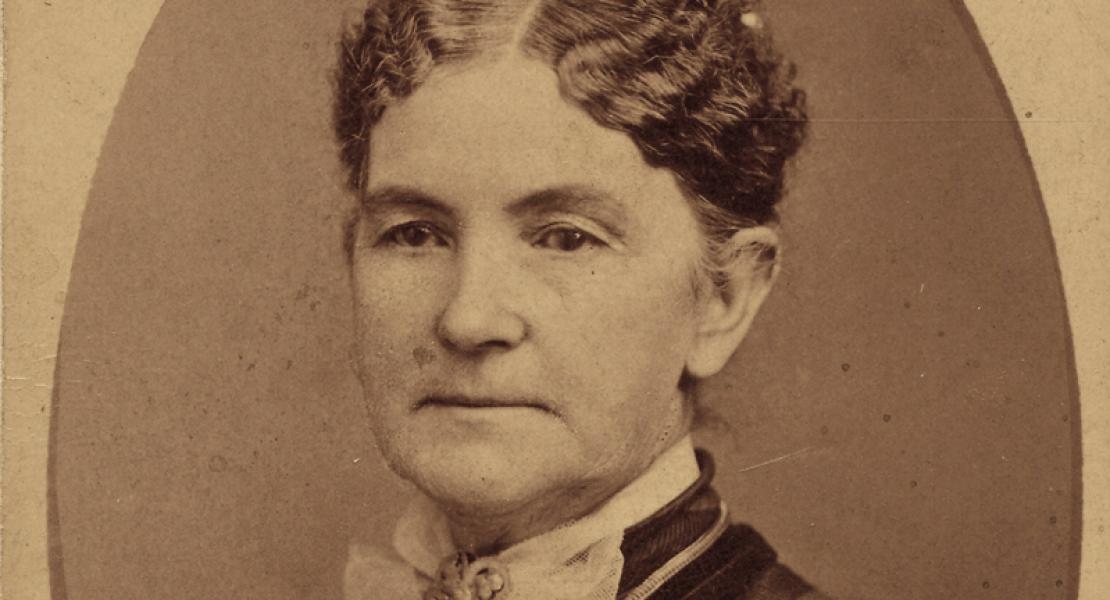 Adaline Weston Couzins, a volunteer nursing escort and relief worker during the Civil War, was born in Brighton, England, on August 12, 1815. Brought to the United States at the age of eight, she eloped with John Edward Decker Couzins in 1834. A carpenter and builder by trade, her husband served as the chief of police in St. Louis throughout the Civil War and as US marshal of the eastern district of Missouri from 1884 to 1887. The couple headed the relief corps in the cholera epidemic of 1849, setting the tone for their later contributions as tireless public servants.

When news of war reached St. Louis in April 1861, Couzins volunteered her services to one of the city’s leading surgeons, Charles Pope. She and her husband later met the first train transporting wounded soldiers to St. Louis from the battlefield after Nathaniel Lyon’s defeat at Wilson’s Creek on August 10. They helped carry the men into the New House of Refuge Hospital, and Couzins “washed and dressed them with the appliances of hospital stores she had gathered together when news came of the battle.”

Thereafter, Couzins contributed her services to the Union cause as a member of the Ladies’ Union Aid Society (LUAS) of St. Louis. She and another society member, Arethusa L. Forbes, volunteered to inspect and report the conditions and number of casualties lying in the wake of General John C. Frémont’s disastrous march into southwest Missouri during the winter of 1862. Within twenty-four hours of their return to St. Louis, a “long line” of hospital cars was sent to retrieve the wounded. Both women were severely frostbitten on the trip, and Forbes never again attempted such a dangerous venture.

Undaunted, Couzins recovered and, together with other society members and supplies provided by the LUAS, proceeded to the front to attend to the wounded after the Battles of Shiloh; Donaldson; Corinth; Pillow; Vicksburg; Red, White, and Yazoo Rivers; and others. In a letter to Couzins’s daughter, Phoebe, years later, Forbes recalled a time when her mother briefly took charge of patient care on one sanitary boat because the “regular male doctors lay drunk in their cabins on liquors furnished by the Ladies Union Aid for the wounded soldiers.” Phoebe Couzins later noted the grisly reality of serving on the battlefields and hospital steamers, remembering the “maimed, bleeding, dying soldiers by the hundreds” on a single boat and the attendant boxes of amputated limbs.

Although some women proved temperamentally unsuited for battlefield or steamer duty, the chief surgeon for the Western Sanitary Commission, Simon Pollack, claimed Couzins to be “conspicuous” among the female volunteers for her “native intelligence, great experience, and untiring activity,” since she “did not mince matters, nor do work by halves.” Unlike the sanitary commission or Regular Army nurses, Couzins received no remuneration for her services and paid for her own passage to the battlefields and occasionally for that of others.

Wounded in the knee by a minié-ball fragment at the siege of Vicksburg in 1863, Couzins became increasingly immobile and finally bedridden and destitute in her old age. In 1888 T. W. Palmer, a US senator from Michigan, lobbied for a government pension on her behalf, citing her unrelenting efforts as a relief worker during the war. James Overton Broadhead went to Washington, DC, to second Palmer’s request, and numerous other St. Louisans prepared testimonials to Couzins’s contributions. On March 27 Senate Bill 2356 approving the pension was passed without debate.

A founder of the Female Guardian Home of St. Louis, Couzins headed the Ladies’ Sanitary Corps of the Special Health Department of St. Louis after the war and campaigned actively for woman suffrage. She also applied to Edward Bates, Abraham Lincoln’s attorney general, for the position of head of the St. Louis post office. Bates claimed his eyes sparkled with animation and pleasure as he read her petition, and he said, “Yes, yes, Mrs. Couzins, you should have that office; no one in our country deserves it more, and I know you well, and I know you will do the office justice.”

Although Couzins did not get the job, Bates’s confidence in her abilities clearly reflected not only her record as a nursing escort and relief worker during the war but also her impeccable character, for by all accounts she possessed the “quiet temperament and greater courage to perform the hardest parts” and performed them with a philanthropic spirit and love of country. Couzins died on May 9, 1892, and was buried at Bellefontaine Cemetery.

Hanaford, Phebe A. Daughter of America: or, Women of the Century. Augusta, ME: True, 1882.