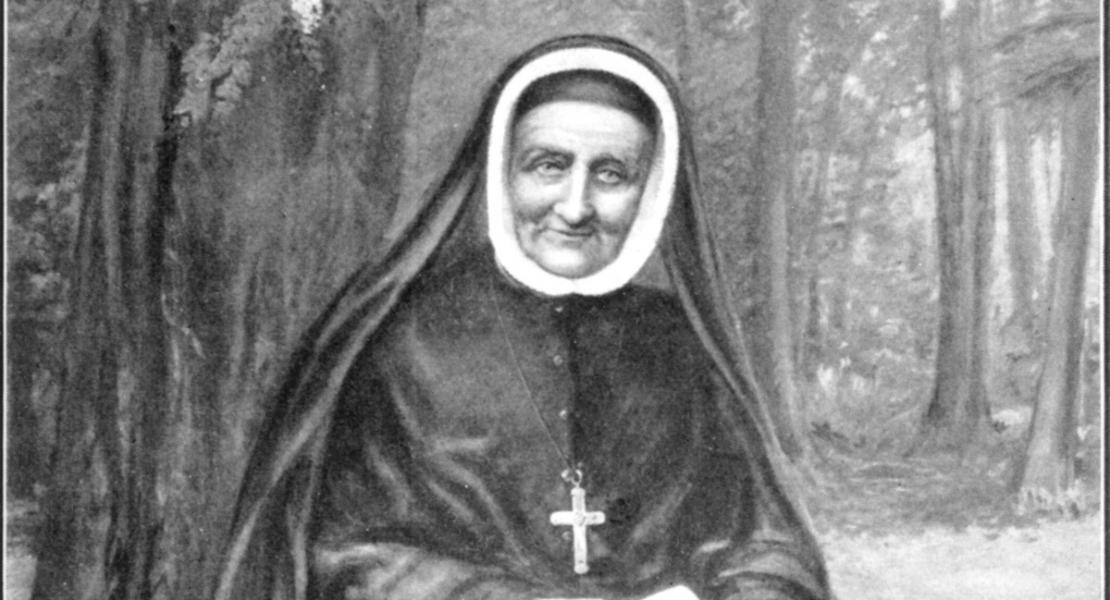 Rose Philippine Duchesne, a French pioneer missionary on the American frontier, was born on August 29, 1769, in Grenoble, France. She was the eldest of five children. Her mother, Rose-Euphrosine Périer, came from an enormously wealthy family that had made its fortune in commerce and banking. Her father, Pierre-­François Duchesne, was a prominent lawyer, civic leader, and politician.

At age twelve Duchesne’s parents enrolled her as a boarding student in Sainte-Marie d’en Haut, a cloistered Visitation monastery on an Alpine mountain overlooking the Duchesne mansion. There she conceived her lifelong desire to work among Native Americans and cultivated an already notable tendency toward self-sacrifice and physical austerity. Her resolve to become a nun caused her parents to withdraw her from the school in 1783. Despite their disapproval, Duchesne continued her penitential practices, refused to marry, and returned to Sainte-Marie d’en Haut in September 1788 to become a novice. The outbreak of the French Revolution delayed her religious vows, however, and in 1792, when monastic houses were outlawed, she was forced to leave Sainte-Marie.

Duchesne grasped little of the Revolution’s meaning within French society. Her wealthy relatives, deeply committed to the Revolution when it served their own political and financial interests, turned reactionary as soon as it began to extend rights to a broader cross section of the French populace. Like many aristocratic Catholic women, Duchesne was shocked at the enforced closure of convents, the exile of priests, and the eventual prohibition of public Catholic worship, drawing no connection between these actions and the hierarchical Church’s aristocratic lineage, vast lands, wealth, and privileges. Unaware of the social and institutional structures that perpetuated inequities, she was nonetheless, in contrast to most members of her class, profoundly moved by the suffering of others and willing to dedicate her life and fortune to alleviate it.

Duchesne proved her extraordinary determination, creativity, and courage repeatedly in the years following her expulsion from the monastery. Thwarted in her attempts to be a nun, she experimented with a variety of religious lifestyles and engaged in numerous charitable activities, often in defiance of Revolutionary-government strictures. She attempted a self-styled religious life at her family’s country home, but that proved too irritating to her family and too sedentary for her energetic temperament. In 1793 she began charitable works in Grenoble, caring principally for priests imprisoned or in hiding, in addition to attending the poor, the sick, and the dying. She organized the “Ladies of Mercy,” a group forcibly disbanded for almost a year during the Reign of Terror for their aid to priests who had refused to submit to legislation regulating the clergy. Finding her niche in a society that proscribed virtually all religious orders proved impossible. She fulfilled some family duties, caring for her dying mother in the mid-1790s and, later, living briefly with a quirky and self-indulgent grandmother who threw her frank granddaughter out.

In another interlude punctuating her charitable work in Grenoble, Duchesne joined some former Visitation nuns who had regrouped in the convent of Saint-Marcellin. The women, however, found her austere interpretation of religious life too harsh. She returned once more to Grenoble, this time to offer religious instruction to poor boys. Her charitable work during these years was both conservative, given its focus on aiding priests and ministering spiritually to the poor and the sick, and revolutionary, because the caring respect she showed the poor defied the then culturally dominant view that poverty, sin, and vice were inextricably bound.

In 1801, with antireligious sentiment easing, Duchesne used her wealth to lease the monastery of Sainte-Marie d’en Haut. The enthusiasm of the women who joined her, including some former Visitation sisters and their superior, quickly vanished: they found her ideals regarding religious life too demanding. By August 1802 all but three had moved out. Despite gossip regarding her uncompromising character, Duchesne’s foundation prospered. In 1804 she met Father Joseph Varin and his charismatic friend Madeleine-Sophie Barat, the young leader of a fledgling group of women religious that would eventually take the name of the Society of the Sacred Heart of Jesus. In Barat’s nineteenth-century religious idiom, devotion to the Sacred Heart referred to the cultivation of the sentiments symbolized by the heart: love, generosity, compassion, and forgiveness. At age thirty-five, Duchesne ended her association with the Visitation order and placed herself under the tutelage of Barat.

The new order opened schools for young girls, one of the few works available to nuns. Narrow religious and social conventions of the time imposed cloister upon them and considered women naturally suited to religious education. Their work both reflected and challenged assumptions dominant within nineteenth-century society. Class bias is evident, for example, in both the order’s organization and its educational ideals. Women from “respectable” or aristocratic backgrounds were designated “choir religious” who handled the teaching responsibilities and all governance. Those from humbler backgrounds were “coadjutrix sisters” in charge of the domestic chores and service work for the convent and school. Similarly, wealthy girls received a superb boarding­-school education, while poor girls attended a separate day school that provided minimal academic training and emphasized manual labor.

These unsurprising social discrepancies were accompanied by striking innovations. The boarders were taught subjects formerly reserved for boys: the nuns rejected the notion that girls were inherently less capable. That poor girls were even considered educable, that they were treated with the “tenderest love” and dignity, challenged the prevailing sentiment. In both schools the nuns emphasized religion above all, aiming to reshape the religious fabric of French society through the future influence their students would have as the moral educators of their families. Duchesne remained at Sainte-Marie from 1805 to 1815, variously directing the boarding school, teaching, and overseeing the material necessities of the school and convent. Her excessive workload suited her penchant for severe self-denial and corporal austerity.

In 1815 Duchesne went to Paris for a meeting of the rapidly growing order and there remained as Barat’s secretary. She began to labor in earnest to expand the order’s mission to the New World, with work among Native Americans. In 1818 Duchesne, now forty-eight, and four other religious embarked on the rough 110-day journey to St. Louis, a frontier trading post of about forty-five hundred inhabitants. The bishop of Louisiana, Louis William DuBourg, had assured Duchesne that they would work among the Indians but reneged on this promise, compelling them instead to start schools for English- and French-speaking children.

DuBourg sent the religious to St. Charles, Missouri, a small village about twenty miles northwest of St. Louis that he predicted would be an international crossroads; Duchesne deemed it “a tomb” where their work would surely fail. The nuns opened a boarding school for wealthy St. Louis girls, DuBourg’s preferred project; a modest day school; and, reflecting Duchesne’s preference, the first free school west of the Mississippi. Although no abolitionist, Duchesne opposed DuBourg by admitting children of Native American–European parentage into school.

In another departure from convention, Duchesne tried, to no avail, to form a type of religious order for women of color. The schools foundered financially, and in 1819 the nuns moved to Florissant, another small town near St. Louis forced upon them by DuBourg. Financial difficulties beset these schools, too. They would have closed but for Duchesne’s protests on behalf of the flourishing free school.

In 1825, encouraged by the Jesuits, Duchesne opened a boarding school for Native American girls. The school failed when the US government pressured the Native Americans to move west. A more promising foundation was made in the wealthier town of St. Louis in 1827. The nuns’ work included care of orphans and a Sunday school for girls with African-European lineage in addition to the schools for white settlers. Typical of all Duchesne’s endeavors, the free school flourished while the paying schools languished. Her difficulties were compounded by her poor mastery of English and her decided lack of interest in cultivating the friendship of wealthy St. Louisans.

By contrast, convents and schools founded by the order at Opelousas in lower Louisiana (1821) and St. Michael’s near New Orleans (1825) under the direction of Eugenic Aude, one of Duchesne’s companions, proved spectacular successes of refined French education, as did the short-lived foundation at La Fourche near St. Michael’s under another religious. A struggle pitting these flourishing southern foundations against the poorer Missouri foundations was aggravated by Aude’s attempts to circumvent Duchesne’s authority as titular head of all the US foundations.

Other religious wrote letters to Barat complaining of Duchesne’s lack of administrative savvy, her inattention to the outward appearance of the order’s properties, her disinterest in cultivating ties with the wealthy, and her tendency to accumulate debts even as she continued to give money to the needy. Barat recognized Duchesne’s failings, but chose to keep her as superior over all the foundations, deeming her unswerving commitment to the poor, a quality lacking in some of the other religious, essential to the order’s mission.

In 1832 the foundation at St. Charles was reopened, in part due to Duchesne’s predilection for serving poorer populations. Barat, citing Duchesne’s age and increasing difficulty managing the growing order, finally relieved her as superior of all the US foundations. Until 1840 Duchesne served as superior first of the St. Louis convent and then the languishing Florissant foundation, which she defended against repeated attempts to close it. Her transition into old age was beset by trials, including scrupulosity, intense anxiety, a sense of isolation, and severe doubts about her self-worth. In 1840 her lifelong wish to become a simple member of a community was finally granted.

Now seventy-one, Duchesne reinitiated her pleas to live and work among the Native Americans. Despite Duchesne’s failing health, Barat felt she could no longer refuse her old friend’s request. In 1841 Duchesne and three other religious moved to Sugar Creek in present-day Kansas, where they lived among the Potawatomi, a group that had lost most of its land in the preceding fifty years to the US government. Although too frail to do much work, Duchesne earned the intense admiration of the Potawatomi, who called her “Quah-kah-ka-num­ad,” meaning “woman who prays always.” She felt rejuvenated: she even wrote to friends of founding new missions in the Rockies. A crushing trial came, however, within a year: her companions considered her health too precarious, and she was forced to leave.

Returning to Missouri, Duchesne lived ten more years in St. Charles, suffering often from loneliness and a sense of uselessness. She continued to write letters, send donations to priests working among Native Americans, help in the free school, and speak vociferously on behalf of the order’s poorer foundations and against the external show of the more prosperous foundations. Her extreme self-abnegation and low self-esteem stood in stark contrast to the opinions of those around her who were awed by her unyielding allegiance to the least fortunate. The Jesuit Pierre Jean De Smet, noted for his work among Native Americans, wrote to her shortly before her death thanking her for her charity to him and to the Native people.

Duchesne died in St. Charles on November 18, 1852. She was beatified by the Roman Catholic Church on May 12, 1940, and canonized on July 3, 1988. Her remains lie in a simple, austere chapel in St. Charles. Once planned as a magnificent shrine, it was then redesigned to reflect better her own commitments to the poor.

Catherine M. Mooney is associate professor of Church History in the School of Theology and Ministry at Boston College.