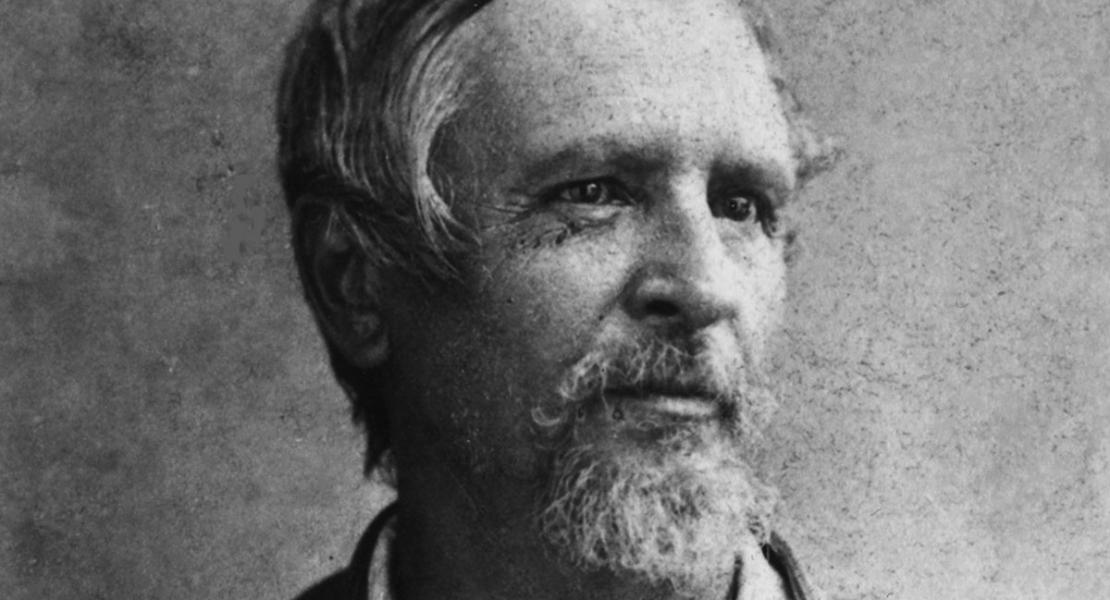 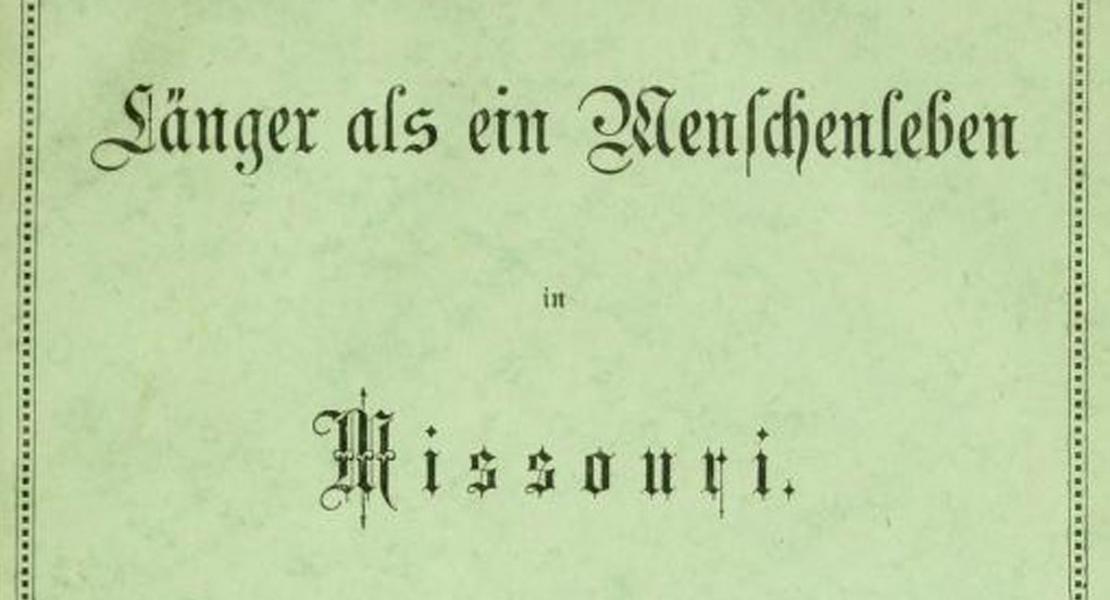 Gert Goebel came to Missouri in 1834 as an eighteen-year-old German immigrant, settling in Franklin County, where he remained a resident for most of his life. He helped his parents carve a farm out of the frontier forest; became an avid hunter and backwoodsman; served in public offices, including as a legislator in each house of the Missouri General Assembly; and worked briefly as a newspaper editor. More than four decades after arriving in the state, he published a memoir that offers one of the most comprehensive firsthand accounts of life in nineteenth-century Missouri as it was experienced by Missouri Germans.

Born on April 1, 1816, in the German city of Coburg, Gerhard “Gert” Goebel was the eldest of David W. and Henriette Kessel Goebel’s three children. His father was a professor, and Gert received a good education that included instruction at Coburg’s Gymnasium Casimirianum, where David Goebel taught. The Goebels lived a comfortable, city-dwelling lifestyle, but disillusioned by the difficult struggle for political reform within the German states, Gert’s father joined the Giessen Society, a group with several hundred members led by Friedrich Muench and Paul Follenius that sought to form a German-speaking colony in the American West. With other members of this society, the Goebels—Gert, his parents, and two younger sisters—embarked on a seven-week transatlantic voyage, reaching Baltimore, Maryland, on July 24, 1834. Traveling by freight wagon and riverboat, they arrived in St. Louis two months later. Divided into two groups for the ocean crossing, the Giessen Society had splintered by the time the Goebels reached Missouri, but the family followed Muench and Follenius west of St. Louis. The two leaders settled in Warren County, the area described in Gottfried Duden’s Report on a Journey to the Western States of North America, a romanticized depiction of the frontier that served as a source of inspiration to subsequent German immigrants. David Goebel purchased land on the opposite side of the Missouri River in sparsely settled northwestern Franklin County and attempted to start a farm.

As Gert Goebel later recounted in his memoir, his father was ill-equipped for frontier farming. Years passed before the farm became productive, more through the efforts of Gert than of David. For unlike his father, Gert was a vigorous and adaptable young man who thrived in his new home. He maintained contact with other Germans, including Muench, a well-educated minister whose embrace of rationalism influenced Goebel’s own political beliefs and freethinking views on religion. But relatively few other Germans had yet settled nearby, and most of the Goebels’ neighbors were “Old Americans” who had come west earlier from states in the Upper South. Living among these neighbors rather than within a colony of German immigrants, Goebel quickly learned to speak English from them and developed an appreciation for their way of life as they taught him the skills of frontier farming and hunting. With one foot planted in his German heritage and the other in this new society, he gained acceptance within each of these two very different Missouri populations and became well positioned to write about them.

In thirty-three chapters that are shrewd, philosophical, and laced with humor, Goebel’s memoir describes relations among and between Missouri Germans and Old Americans as they steadily converted the remaining wilderness in Franklin County and surrounding areas into settled land. In one passage, for example, Goebel describes in detail the process of making fence rails that American neighbors taught him and his father after their initial efforts to cut down a tree produced a stump that “looked as if beavers had gnawed it off”; their incompetent handiwork, he notes, “was for a long time a pleasing sight for passing Americans.” In other passages, Goebel recounts that it was the Germans who sometimes had the last laugh: asked by American neighbors to sing “a beautiful German song” at a social gathering, a male choral group chose one with lyrics which “had really not been composed to be sung in the presence of ladies” and “presented it with such serious dignity…with great self-possession they then received the thanks of the many, who, naturally, had not understood a word of the text. Then they probably sang other songs, the presentation of which did not call for so much self-control.”

Goebel’s memoir portrays Germans and Old Americans learning to live together as the state of Missouri experienced its first significant wave of non-English-speaking immigrants in the years leading up to the Civil War. Yet the divisions that led to war split Missourians along ethnic lines as well as other fault lines. As the crisis drew close, Goebel proved staunchly loyal to the Union, and his chapters on wartime Missouri present views that were widespread among the state’s German immigrants, now numbering in the tens of thousands, who overwhelmingly opposed slavery and favored the North. During the war, Goebel at the age of forty-five served a three-month stint in the Franklin County Home Guard in 1861. He was elected as a state representative in 1862 and won election to the state senate in 1864; his politics generally aligned with the Radical Republicans. One of the most vivid chapters in his memoir describes Price’s Raid, which passed through Franklin County in the fall of 1864 and overran the Goebel farm, though he was fortunate enough to encounter regular-army Confederates who drank wine with him rather than irregular mobs that left a path of violence and destruction behind them.

After his senate term expired in 1868, Goebel was appointed chief clerk of the state register in 1870 and 1871. He ran unsuccessfully to return to the state legislature in 1874. Perhaps encouraged by the publication of his memoir in 1877, he took on another literary venture in 1881, accepting the editorship of the Hermanner Volksblatt and its English-language counterpart the Advertiser-Courier, both weekly newspapers in Hermann, Missouri. He remained as editor for about six months before retiring to a life of occasional writing and public speaking while residing mostly on the family farm in Franklin County. His wife, Carolina Becker Goebel—a ten-year-old passenger on the same ship (and same wagon train) that brought him from Europe to Missouri—had died in 1864, but several of the couple’s seven children continued to live nearby. In Goebel’s late years, his sons August and Charles each took a turn running the farm, and it was there that he died in the company of family members on September 10, 1896.

The memoir, Länger als ein Menschenleben in Missouri, was published by a St. Louis firm and circulated in both the United States and Germany, but although Goebel wrote his own translation, the work did not become widely available to English-language audiences for more than a century after his death. Its title, which loosely translates as Longer Than a Man’s Lifetime in Missouri, reflects his effort to trace the history of the Missouri frontier back to early white settlers by including accounts told to him by his American neighbors. Notable for its close observation of everyday occurrences that might have gone unremarked by someone who had not arrived in the state as an outsider, and also for its depth of understanding and affection toward his adopted state, Goebel’s work ranks among the most significant personal narratives on nineteenth-century Missouri.

John Brenner is the managing editor for the State Historical Society of Missouri.

Duden, Gottfried. Report on a Journey to the Western States of North America and a Stay of Several Years along the Missouri (during the years 1824, ’25, ’26, and 1827). James W. Goodrich, general editor. Edited and translated by George H. Kellner, Elsa Nagel, Adolf E. Schroeder, and W. M. Senner. Columbia: State Historical Society of Missouri and University of Missouri Press, 1980.

Goebel, Gert. The Development of Missouri: A German Immigrant’s First-Hand Account of Life in the Missouri Backwoods. Translated to English by the author. Washington, MO: Washington Historical Society, 2013.

———. Longer Than a Man’s Lifetime in Missouri. Translated by Adolf E. Schroeder and Elsa Louise Nagel. Edited and with an Introduction by Walter D. Kamphoefner and Adolf E. Schroeder. Columbia: State Historical Society of Missouri and Brush and Palette Club of Hermann, 2013.