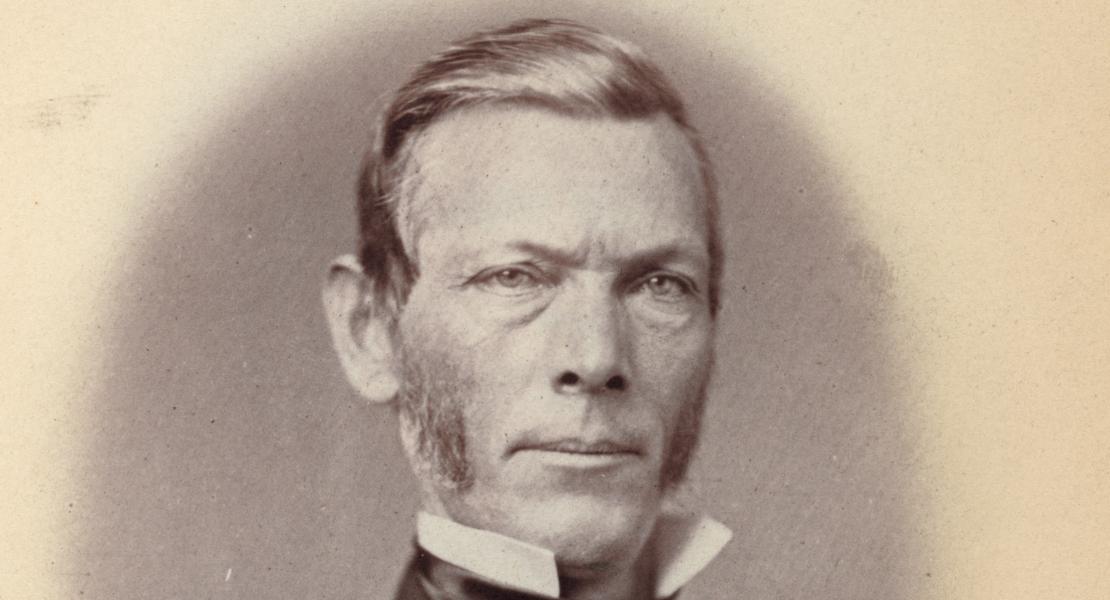 James S. Green was born in Fauquier County, Virginia, on February 28, 1817, and settled in Lewis County, Missouri, in 1838. Without benefit of a formal education, he studied law and was admitted to the Missouri bar at Monticello in 1840. After establishing his legal practice, Green actively involved himself in Missouri politics as a supporter of Thomas Hart Benton, the state’s powerful Democratic US senator.

Green appears to have been one of the ablest members in the 1845 Missouri Constitutional Convention. Despite his lack of formal training, he impressed others with his knowledge of constitutional law. In 1846, running as a Benton Democrat, he won election to the US House of Representatives from Missouri’s Third District. He won reelection to Congress in 1848, but a breach opened between him and Benton as Green became an increasingly ardent advocate of the South’s most extreme proslavery and states’ rights positions. A staunch racist, he spoke out in strong and derogatory terms to justify slavery on the grounds that whites were inherently superior to blacks. During the controversial and heated congressional debates over the expansion of slavery into new territories that led to the Compromise of 1850, Green was the only member of the Missouri delegation in the House of Representatives who consistently voted with the Southern ultras. He had become more in tune with Missouri’s pro-Southern senator David Rice Atchison than with the Union-minded Benton.

In January 1850, Green stood as an anti-Benton Democrat for election by the Missouri General Assembly to a seat in the US Senate. He lost in his bid for office, but so did Benton, who, after thirty years of service in the Senate, was replaced by Henry S. Geyer, a Whig.

President Franklin Pierce appointed Green as chargé d’affaires to Colombia, South America, in 1853. That position proved too monotonous and too far from home for Green, who returned to Missouri in 1854 suffering from the ill effects of an unfamiliar climate.

Back in his home state, Green renewed his role in politics as an uncompromising spokesman for the South and a determined opponent of Benton. He became a leading Missouri advocate of the doctrines of John C. Calhoun, a senator from South Carolina. Throughout Benton’s effort to regain a Senate seat, and in his 1856 campaign for the governorship, Green followed him around the state making every effort to bring about his defeat. James G. Blaine wrote that no other man did as much to break Benton’s power in Missouri as Green. While this is an overstatement, it is an indication of Green’s political passion.

Green was elected again to the US House of Representatives in 1856, but before his term began the Missouri General Assembly selected him to fill the state’s vacant US Senate seat. In 1855 none of the three senatorial candidates—Benton, Atchison, and Alexander W. Doniphan—had been able to muster a majority in the General Assembly. In 1857, with Atchison no longer in the race, Green (as a member of the ultra-Southern faction) easily won election to complete the remaining four years of the senatorial term.

In the Senate, Green devoted his major efforts to championing the Southern cause during the great sectional controversies of those years. An able orator, he spoke out in support of slavery, its expansion, and the right of a state to secede from the Union. One disappointed contemporary, believing that Green had been led astray by Calhoun, observed that he had become one of the most active supporters of the rebellion.

When his senatorial term ended on March 3, 1861, Green returned to Missouri and made his home in St. Louis. He worked with Missourians including the governor, Claiborne Fox Jackson, and lieutenant governor, Thomas Caute Reynolds, in the unsuccessful effort to move Missouri out of the Union and into the Confederate States of America.

During the 1860s, Green practiced law in St. Louis, but his declining health reduced the amount of work he could do. He died on January 19, 1870, just before his fifty-third birthday. He was buried at Canton in Lewis County.