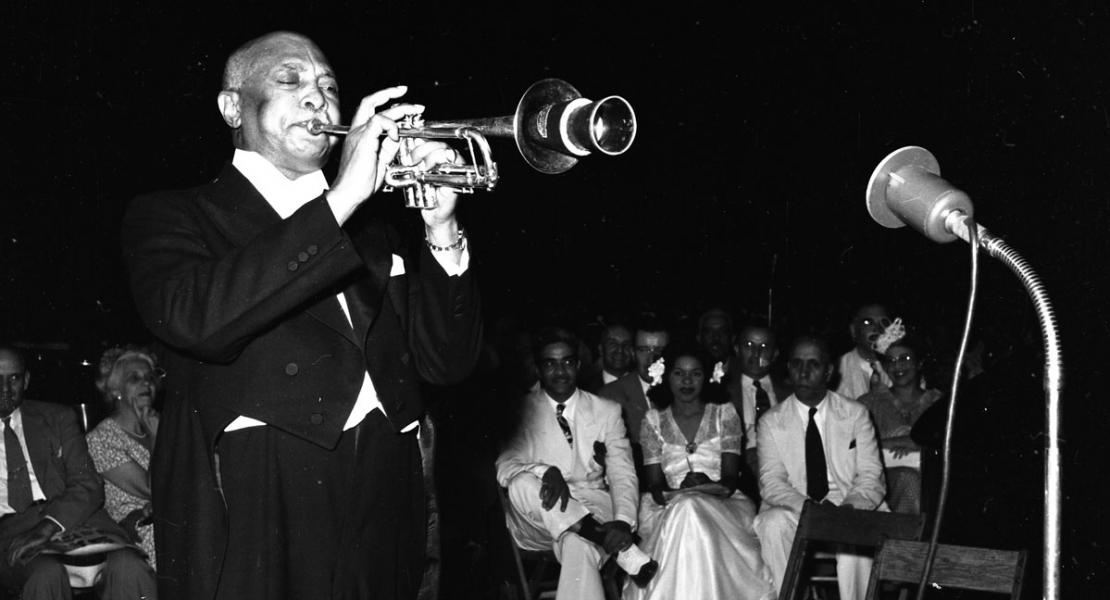 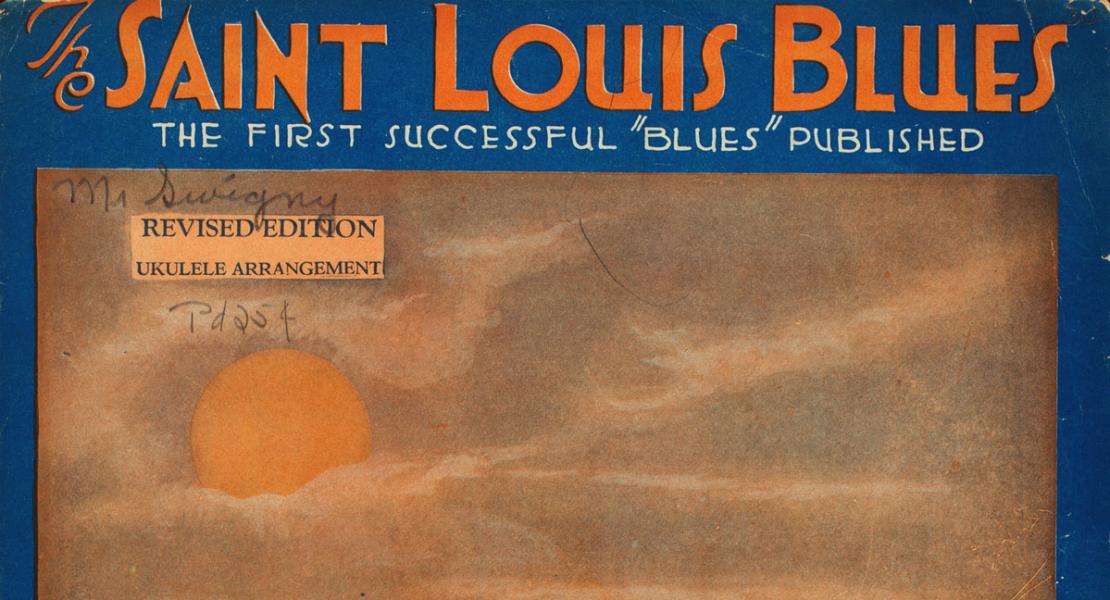 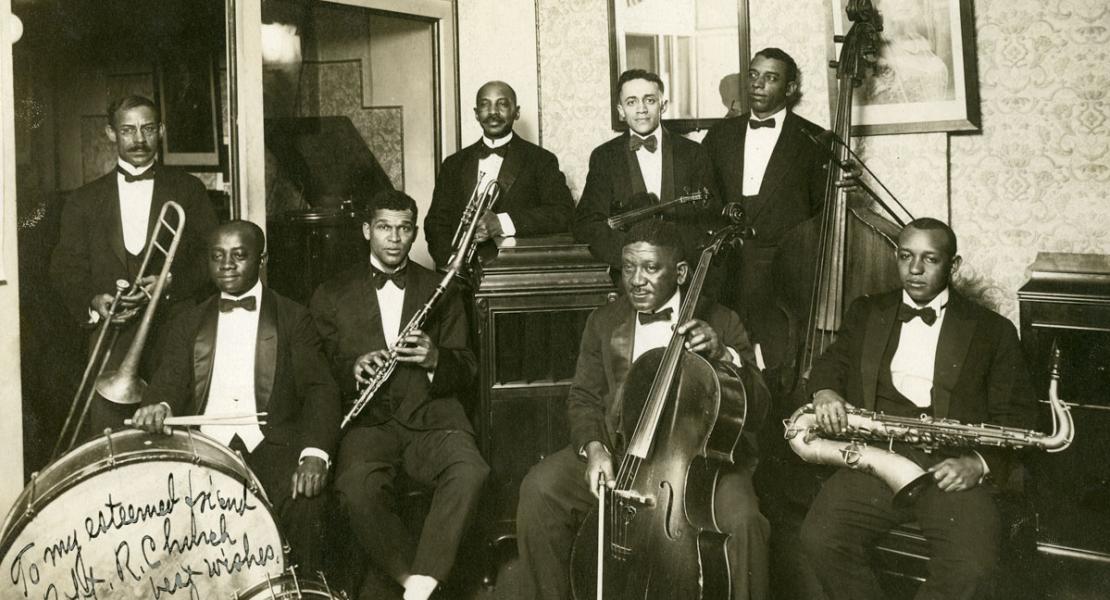 Although William Christopher Handy spent relatively little of his long life in Missouri, his “St. Louis Blues” (1914) secured a place for him in the state’s musical history. Handy’s second important published composition, “St. Louis Blues” grew out of melodies he heard there and of memories of his troubles in the depression years of the 1890s. The songs “Memphis Blues” (1912) and “The Beale Street Blues” (1917) and others earned Handy the title of “Father of the Blues,” and maintained for St. Louis its reputation as an important musical center in the early twentieth century.

W. C. Handy was born on November 16, 1873, in Florence, Alabama. His father, a Methodist Episcopal minister, had high hopes for the bright, talented child, but opposed his musical aspirations. As a youngster Handy studied the organ and voice, which his father believed would help him if he became a minister, but he also taught himself to play the cornet, which led to open conflict between father and son.

After completing high school, Handy taught school for a short time before working at the Bessemer pipe works in Birmingham, Alabama. In the 1890s, when economic times became more difficult, Handy turned to music for a living. He joined a quartet and in 1892 headed for Chicago, hoping to perform at the World’s Columbian Exposition, which, unbeknownst to Handy, had been postponed for a year. He traveled to St. Louis in search of work as an entertainer but found the city overrun with unemployed musicians who gathered in the district near the levee. Handy remained in the city, discouraged and impoverished, but alert to the music and people around him. In spite of his trials in St. Louis, he clung to his dream of becoming a musician, and in the next several years he rose to national prominence.

Leaving St. Louis, Handy traveled to Henderson, Kentucky, where he began playing with local black orchestras, and where he met his future wife. In 1896 he joined W. A. Mahara’s Minstrels as a cornet player, and a year later he was promoted to bandleader. Except for a brief hiatus between 1900 and 1902 when he served as bandmaster at Alabama A&M College, Handy remained with Mahara’s Minstrels until 1903. Between 1903 and 1908 he organized and led military and dance bands in the area around Clarksdale, Mississippi, and then moved to Memphis, Tennessee.

While living in Memphis, Handy began to develop a distinct variety of African American music that eventually became part of the blues craze of the 1920s. His initial publication, “Memphis Blues” in 1912, has been described by some scholars as more of a cakewalk than a blues composition. Handy himself wanted his second song, “St. Louis Blues,” to “go beyond its predecessor and break new ground,” but he also hoped to combine the appealing syncopation of ragtime with the melodic tradition of spirituals. The song became a popular hit almost immediately, and its composer, at age forty, entered a new phase of national celebrity.

Handy promoted the blues as well as other African American genres through a music company he established with Harry Pace in Memphis in 1908. Ten years later Pace and Handy Music Company moved its headquarters to New York, where it became a leading publisher of songs by black artists. When the company broke up two years later, Pace founded Pace Phonograph Company and Black Swan Records, and Handy formed Handy Music Company. In 1917 Handy and his orchestra began making recordings for Columbia Phonograph Company, becoming black pioneers in that field of entertainment.

In the 1920s and 1930s Handy became a prominent advocate for African American music. In 1928 he produced an all-black program at Carnegie Hall. He issued an anthology of blues in 1926, a compilation of black songwriters and composers in 1936, Book of Negro Spirituals in 1938, and Unsung Americans Sung in 1944. Handy also served as a musical consultant for World’s Fairs in Chicago (1933), San Francisco (1939), and New York (1939). In 1940, NBC Radio featured an all-Handy program, marking the first time it had honored a black artist in that way.

In 1958, Nat “King” Cole portrayed Handy in a biographical film titled St. Louis Blues, but Handy himself never saw the finished product. On March 28, 1958, Handy died in New York. By the end of his life, he had become an honored entertainer and had succeeded in making African American folk music popular and accessible to a wider American audience.

Susan Curtis is professor emerita of history and American studies at Purdue University.