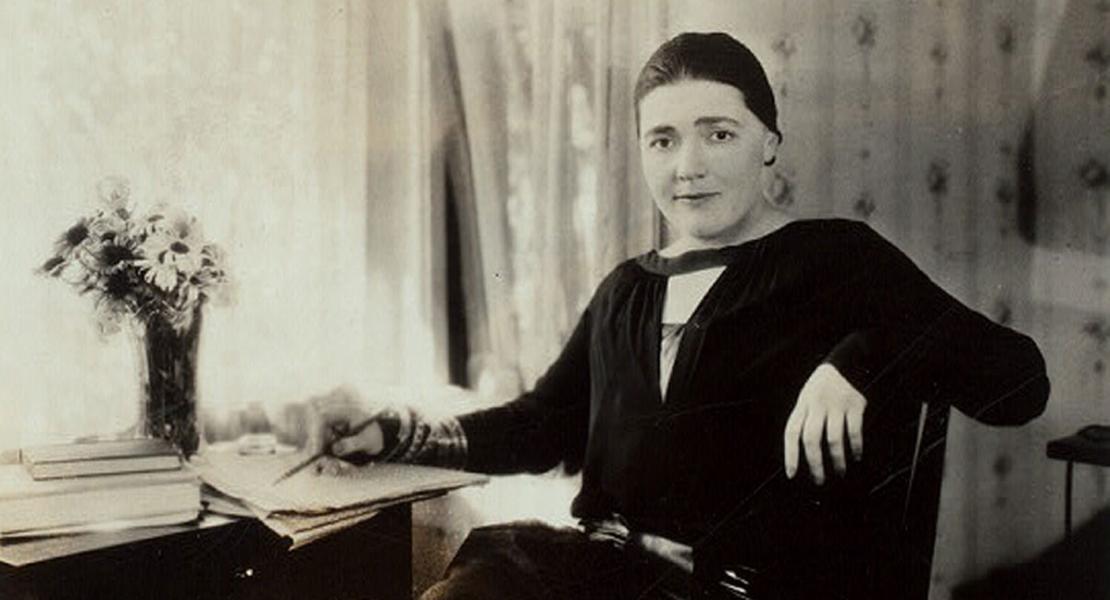 Fannie Hurst, the daughter of Rose Koppel and Samuel Hurst, was born at the home of her maternal grandparents in Hamilton, Ohio, on October 19, 1889. A short time later she was taken to St. Louis, her home for the next twenty years. The family was, in Hurst’s words, “well-fixed” for the era, with her father drawing about $10,000 annually from his shoe factory. Although sources often refer to Hurst as an only child, she had a sister, Edna, eleven months younger, who died from diphtheria at age three. Hurst described her home life as “arid” with “little fun” other than her mother’s “flashes of wit,” and stated that she “adored” her dramatic, verbal, but long-suffering mother, and “liked” her intelligent, judgmental father. The tone of her autobiography suggests, however, that she craved her father’s affection most and that she enjoyed a happy childhood; her parents, by indulgence rather than by knowledge of progressive education, allowed her to learn what she wished as she wished. She depicted her parents and most of the events of her childhood with the warm, sympathetic touch that marks her fiction.

Hurst, whose teachers recognized and encouraged her talents, succeeded in almost every endeavor. She excelled in drama and athletics—especially tennis—primarily in an attempt to be “special.” Her natural abilities lay in literature and writing, and she pursued both with fervor. By the age of thirteen she was reading writers such as Coleridge, Tolstoy, Howells, Pushkin, and Hardy. For one semester she attended a private St. Louis school, Harperly Hall, but, unhappy, transferred to Central, the single white public high school in St. Louis at that time, with an enrollment of fourteen hundred and known for its “innovations.” There her essays were read aloud at teachers’ meetings. She felt particularly indebted to William Schuyler, the assistant principal, a man “with his head in the clouds,” who encouraged her thinking and writing. A prolific writer, Hurst wrote essays for other students (for which she lost the honor of having her essay read at graduation).

With great confidence, Hurst submitted her poems, stories, and essays to major publishers. Sources credit her with submitting a verse masque to the Saturday Evening Post at the age of fourteen; her autobiography indicates she was older, a freshman in college. By the age of eighteen she had so many rejection slips that her parents used them to discourage her from writing.

While studying at Washington University, Hurst had her first publications, “Ain’t Life Wonderful” and “Home,” in the St. Louis weekly Reedy’s Mirror; she also wrote a few freelance assignments for the city’s newspapers. She graduated with a Bachelor of Arts degree in 1909, and in 1910 moved to New York, ostensibly to work on a graduate degree at Columbia, but really to immerse herself in writing. In New York she experienced the kind of life she would write about: she worked as a waitress in Child’s restaurant, as a salesclerk “behind the ribbon counter of Hearns,” and as an actress. “For a stretch of twenty-six months, without even meeting an editor, writer or publisher, I wrote, peddled, rewrote, repeddled, without so much as one acceptance or word of encouragement.” Her career took shape when she was encouraged by Robert H. Davis, editor of Munsey’s, who said to her, “Girl, you are a writer!” Two years later her first book, Just Around the Corner, appeared.

Hurst married Jacques S. Danielson, a Russian-­born pianist, in 1915. The marriage was in the independent vein that Hurst had followed and would follow all her life. Kept secret for five years, the marriage when announced created a sensation since the couple had separate residences and separate careers. By all accounts, and particularly according to Hurst’s autobiography, the marriage was happy and enduring, though the couple had no children. Danielson died in 1952.

Hurst was highly successful by most standards. In her twenties she was sought by major publications such as the Saturday Evening Post, Metropolitan Magazine, the Delineator, Century, Red Book, and Cosmopolitan. She was acquainted with many of the top writers of the era—Sinclair Lewis, Willa Cather, Rebecca West, F. Scott Fitzgerald, and Theodore Dreiser, for example—but said she mingled with them only slightly, if at all, feeling “awe” in their presence; she preferred the “surge” of the common people. These claims probably sprang from modesty, since Hurst’s circle of friends was far from common. A close friend of Eleanor Roosevelt, Hurst was a frequent guest at the White House and mixed with prominent political and social figures of the time.

Sources disagree as to which publication established Hurst’s success. Contenders for that position are Lummox (Hurst’s favorite), Every Soul Hath Its Song, and Humoresque. Several of her books were best-sellers, and some were translated into as many as sixteen languages and made into plays or movies. Back Street and Imitation of Life, for example, still appear as American movie classics. She dealt with current and sensitive issues such as class struggle, sexual liberation, and racism—she “wrote against the second­-class status of Negroes”—but primarily her works are of the experiences of women in a male-dominated society. Her heroines are often abandoned, abused, or destroyed; if they happen to attain professional success, but without male companionship, they are unfulfilled. Hurst wanted to write the “history of woman in four or five volumes,” and, as literary critics Stanley Kunitz and Howard Haycraft noted, may have been doing so all along.

Critics agree that Hurst’s writing never attained the level of quality that makes for literary greatness. At her worst, she overwrote, exercised poor taste, and descended into sentimentality. Nonetheless, critics agree on the strengths of her work: rich with detail, vigorous, and always warm and sympathetic. One must remember that Hurst wrote during the years of high modernism, when the division between popular and literary writing widened, and when the sentimental novel was excluded from serious consideration as art. Hurst herself questioned the division, wondering why a work could not be of literary merit just because it was popular. She recalled with chagrin the then-current judgment: better to be a classical failure than a popular success.

Hurst brought the same energy to other concerns as to her writing. She lectured at universities, appeared often on radio and television programs, and served for various periods with numerous civic and national organizations, including the Women’s National Housing Commission and the New York World’s Fair Commission. During the war she campaigned for war bonds—her group of campaigners included Charles A. Lindbergh and Albert Einstein. In 1952 she was appointed by President Harry S. Truman as a US delegate to the United Nations World Health Assembly in Geneva. She was given the “key” to Versailles and traveled to Canada and Israel at the invitations of their governments.

Hurst, though not noted among the great literary writers of her era, was one of the most popular, well paid, and prolific. She was a handsome woman and a gracious hostess, and was admirably surprised by and grateful for her success, though she obviously earned it with perseverance and talent. Twenty-five years after first leaving St. Louis, she was invited, along with T. S. Eliot and Judge Learned Hand, to receive an honorary degree from Washington University. She visited Cates Avenue, the street she had lived on as a child, and found it “remarkably” free of change. It was as she earlier described it, “a dream street but still a real street.” Hurst died on February 23, 1968.

Rose Marie Kinder is a professor emerita at the University of Central Missouri.