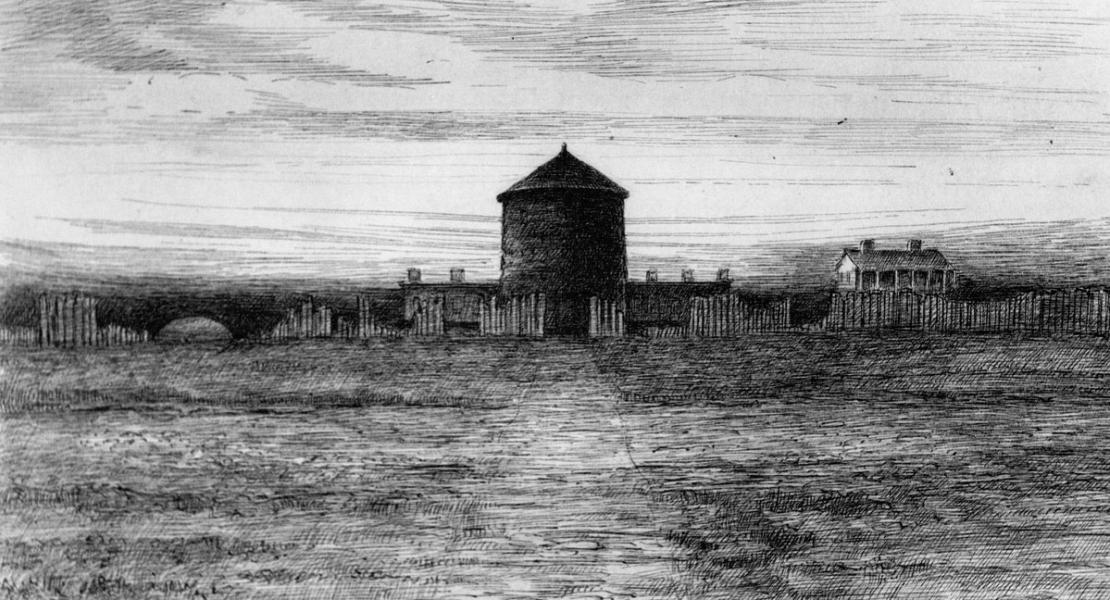 Controversy swirled around Upper Louisiana’s third lieutenant governor in life and in death. Virtually nothing is known about Fernando de Leyba’s early life aside from the fact that he was born in Barcelona, Spain, and came to Louisiana where he served as a captain in the Stationary Regiment. In 1778, Louisiana governor Bernardo de Gálvez appointed him to replace the popular Francisco Cruzat as lieutenant governor in St. Louis. Leyba assumed command of his new post at a time when worsening relations with the British pushed Spain ever closer to open warfare.

Soon after arriving in Upper Louisiana, Leyba established contact with George Rogers Clark, the leader of the successful American military campaign in British Illinois. When Clark’s fighters occupied Kaskaskia in July, Leyba hurriedly wrote a note congratulating them on their victory. A short time later he welcomed the victorious Clark to St. Louis with military salutes and a round of festivities. The two men became fast friends, and Clark, who informed the Continental Congress that he was “proud and pleased at the fine reception he had been given by the Spanish commandant,” returned to St. Louis on several occasions to purchase supplies from the local merchants.

Leyba faced formidable challenges in defending his exposed domains. Time and the elements had taken their toll on the wooden fortifications the Spaniards had constructed at the mouth of the Missouri in 1768. Leyba recommended replacing them and requested that two hundred regular troops be sent to Upper Louisiana. Gálvez declined to approve Leyba’s recommendations, noting that he had no authority to authorize such large expenditures from the royal treasury.

Conditions were understandably precarious. Leyba reported that the unprecedented number of Native Americans descending upon him seeking advice and assistance had exhausted his supplies of food and merchandise. He warned his superiors that the chronic shortages of goods in St. Louis would cause the Indians to turn to the British. His attempts to regulate the fur trade also elicited protests from some traders who complained that he sold trading licenses to the highest bidders.

Word that Spain had gone to war against Great Britain reached St. Louis in February 1780. Upon hearing that news, Leyba promptly accelerated his efforts to secure Upper Louisiana’s settlements against attack. St. Louis was especially vulnerable. Its strategic location and its use by the American rebels as an unofficial supply base made it a prime target for a British assault, but there were fewer than forty regular Spanish troops in all of Upper Louisiana. Even before Leyba had learned of the state of war, he had authorized the construction of a public road linking Ste. Genevieve and St. Louis for use in the event that ice blocked travel on the Mississippi during the winter months. He also took steps to reorganize the local militia into a more viable fighting force.

The peril became clear in late March when reports reached St. Louis warning of an imminent Indian attack from the north. Since Leyba’s requests for additional support from New Orleans had been denied, he was forced to secure the funds needed for fortifying St. Louis through a public subscription. He intended to construct four stone towers, but only the one known as Fort San Carlos was built. It played an important role in repelling the subsequent assault against the city, thanks in part to the installation of the five cannons Leyba had rescued from the abandoned fort on the Missouri. When insufficient funds forced him to scale back his plans for fortification, he resorted to digging trenches around the village’s perimeter.

On May 9, 1780, Leyba learned that a large British and Indian war party had begun moving down the Mississippi. To augment his meager forces, he ordered the regular soldiers and militia at Ste. Genevieve to report to St. Louis. He also summoned all hunters and trappers within seventy-five miles of the capital to return immediately. With a total defensive force of slightly more than three hundred, he prepared to defend the city.

The attack on St. Louis came on May 26 when a band of British soldiers, Canadian traders, and Indian warriors, numbering perhaps as many as one thousand, swooped down upon the city from the northwest. Leyba’s defensive measures paid off, and the outnumbered defenders managed to fend off the attackers, but the costs of victory were high. The fifty-three St. Louisans killed or taken prisoner represented a substantial loss for a village with only seven hundred inhabitants. Local critics denounced Leyba for having failed to do more. Some resented his use of forced requisitions in constructing fortifications. Reports of an impending second attack upon St. Louis renewed the sense of despair.

Personal problems added to Leyba’s woes. His wife died unexpectedly in St. Louis, leaving him with two young daughters. A lingering illness made matters worse for the beleaguered official. All of this proved too much for Leyba, who died in St. Louis on June 28, 1780.

Long after his death, local tradition perpetuated the myth of Leyba as a traitorous and incompetent official whose neglect nearly led to the destruction of St. Louis. He clearly deserved better. His record was no worse than most. He had successfully managed a difficult assignment and done as much as could have been reasonably expected with the limited resources available to him. Ironically, in gratitude for Leyba’s successful defense of St. Louis, his superiors in New Orleans promoted him to the rank of lieutenant colonel, but he did not live to receive the news.

McDermott, John Francis. “The Myth of the ‘Imbecile Governor’: Captain Fernando de Leyba and the Defense of St. Louis in 1780.” In The Spanish in the Mississippi Valley, 1762–1804, ed. John Francis McDermott. Urbana: University of Illinois Press, 1974.