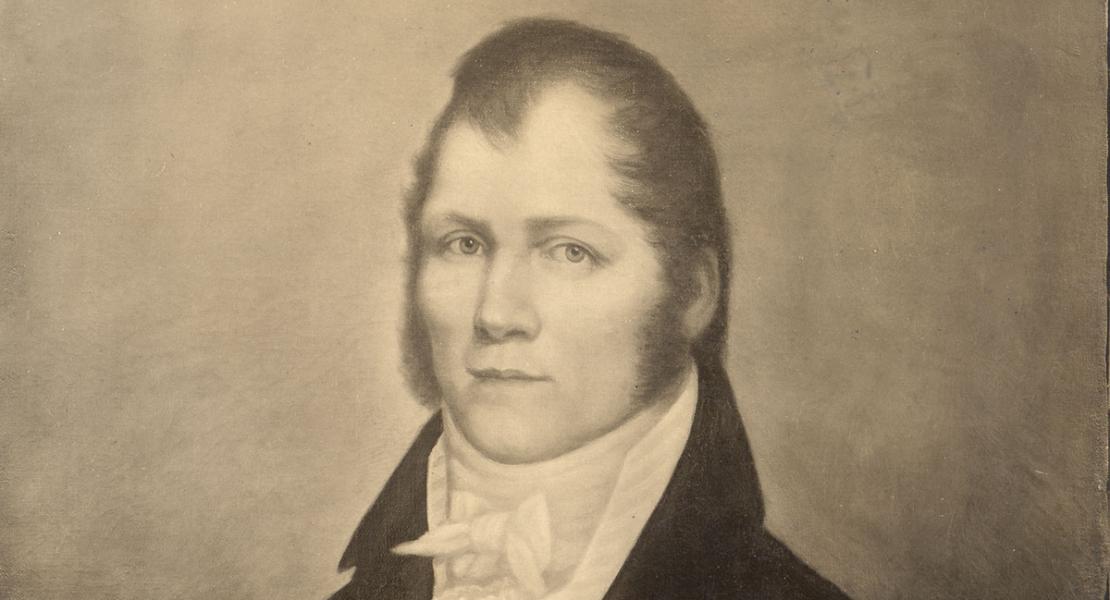 Alexander McNair, the first governor of the state of Missouri, was born in what was then Cumberland County, in central Pennsylvania, on May 5, 1775, the seventh and youngest child of David and Ann Dunning McNair. Alexander’s letters suggest that he received only a rudimentary education in his early years, and the oft-cited claim that he studied at Philadelphia College, later the University of Pennsylvania, seems somewhat dubious. He volunteered for a military company raised to suppress the 1794 Whiskey Rebellion, and five years later when war with France threatened, he was commissioned as an ensign in the US Tenth Infantry. Those experiences gave him a penchant for military life that he carried with him to Missouri.

The McNairs were Federalists actively involved in Pennsylvania politics and land speculation. They also sold merchandise, especially ironware, in settlements along the Ohio River. Alexander McNair traveled to Ohio and Kentucky to peddle wares in 1801 and 1802, and the next year he expressed an interest in securing a government contract to supply western US military posts. There is no evidence that his bid was successful, but in the fall of 1804 McNair accompanied Indiana’s territorial governor, William Henry Harrison, when he went to St. Louis to establish a new government for the Louisiana Territory. McNair decided to stay in St. Louis, and Governor Harrison helped him secure appointments there as both an adjutant in the Louisiana territorial militia and a justice on the Court of Common Pleas and Quarter Sessions. McNair’s appointment to the bench was somewhat surprising in view of his family’s strong Federalist leanings, but those past connections apparently mattered less in the remote frontier territory.

When St. Louis was incorporated as a town, McNair became one of its five elected trustees. He helped reorganize the St. Louis Police Department, and in recognition for those efforts he was named sheriff of St. Louis County in 1810.

Given his land-speculation activities in Pennsylvania, it was no surprise that McNair quickly championed the cause of Louisiana’s Spanish land claimants. His support for confirming the Spanish land titles made him popular among St. Louis’s influential French Creole leaders, and he soon became associated with the St. Louis Junto, a powerful clique of businessmen, lawyers, and land claimants. McNair’s 1805 marriage to Marguerite Reihle further cemented his ties with the city’s leading Creole families. His defense of the Spanish claimants rekindled a feud with Judge John B. C. Lucas, an outspoken foe of a liberal confirmation policy in the Louisiana Territory. Lucas had previously clashed with McNair over speculative land dealings when both men resided in western Pennsylvania.

McNair took special interest in his militia duties. In 1808 he advised his brother of the dangers of an Indian attack and noted that if hostilities erupted, “I am so much of a military man that I must have a hand in the war.” Following the outbreak of the War of 1812, McNair was named adjutant and inspector general of the territorial militia with the rank of colonel. He commanded the First Regiment, and at war’s end the popular officer traveled to the national capital to urge federal officials to compensate unpaid territorial rangers and militiamen.

However, business appears to have been the primary purpose for that journey. While en route to Washington, DC, McNair stopped in Baltimore to purchase goods for his firm, McNair, Thompson, and Company, and in Washington he lobbied US officials for government contracts. He apparently succeeded because he secured a contract to supply the military post at Prairie du Chien, and in 1816 he claimed to be the leading sutler in the Missouri country.

With so much business to look after, McNair declined the nomination from James Madison, the US president, to serve as a commissioner charged with negotiating treaties with western Indian tribes. He did accept an appointment to the newly created position of federal register of lands in St. Louis when it was offered to him in 1816. The lucrative post made him one of the highest-paid officials in the territory, and he relinquished it only after he was elected governor in 1820.

McNair began to gradually distance himself from the St. Louis Junto. As register of lands he championed squatters’ rights and supported the small claims of newer American settlers. He also voiced his support for statehood and joined Thomas Hart Benton in condemning Congress for its delay in admitting Missouri into the Union. He still retained enough support among members of the St. Louis caucus to secure their backing for a seat in Missouri’s 1820 Constitutional Convention. He won election as a delegate on an anti-restrictionist platform that pledged to oppose placing any limits on slavery.

McNair played a relatively minor role in the convention’s proceedings, but his positions on many issues placed him at odds with former political associates. He opposed life tenure for judges and criticized the high salaries set for the governor and the judges. One of Missouri’s first territorial politicians to capture a glimpse of the future Jacksonian vision of American democracy, McNair was already positioning himself to run for governor by championing the interests of the growing ranks of American settlers in Missouri’s out-state regions.

In the absence of well-organized political parties, Missouri’s established leaders supported territorial governor William Clark as their candidate to become the new state’s first governor. McNair announced his intention to oppose Clark. The former explorer, who was away from Missouri attending to his sick wife, did little campaigning, but his powerful friends in St. Louis waged a vigorous effort on his behalf.

The race for governor was bitterly contested. McNair campaigned by appealing to rural voters throughout the state for support against his former allies in the St. Louis Junto. He criticized members of the Constitutional Convention for keeping its procedures secret and denounced the new constitution's undemocratic features. He also took exception to the high salaries the constitution provided for state officials, while conveniently overlooking the handsome sums he had been paid as federal register of lands.

Clark’s supporters countered by questioning McNair’s ability to hold such a high office and claiming that he had made no contribution in the Constitutional Convention. They accused him of doing too much campaigning in the tippling shops and backstreets among the dirtiest blackguards. McNair clearly benefited from the new constitution's provision granting universal white manhood suffrage, and with the support of out-state voters he easily defeated Clark. The death of two of McNair’s children from typhoid shortly after the election tempered the joy of his victory.

As Missouri’s first governor, McNair initially declined to call for state action to promote economic growth or social improvements. He seemed concerned that governmental power might be misused to serve a privileged few. When he addressed the General Assembly in the summer of 1821, Governor McNair took note of the great public and private distress caused by the state’s depressed economic conditions in the wake of the Panic of 1819, but he cautioned the legislators to act to provide relief only “if it can be done without trenching out the fundamental principles of the Constitution.” He offered no specific recommendations for legislative action.

On its own initiative the General Assembly enacted a series of laws intended to relieve debtors and to guard against property foreclosures. The legislators also created a state loan office and authorized the issuance of bank notes in an effort to stimulate the economy. These highly controversial actions proved generally unsuccessful and were soon repealed or found unconstitutional.

In November 1821 McNair told the General Assembly that it had a “destiny” to awaken the slumbering energies of the state with a well-planned program to encourage the development of its internal resources. Once again, however, he made no specific recommendations, and the legislators took no action. McNair did propose the establishment of agricultural societies to promote improved farming methods and to conduct meat and grain inspections. He recommended the use of federal land grants to support public schools and internal improvements. The General Assembly authorized the establishment of only a tobacco warehouse to facilitate tobacco sales in the state. It also adopted a design for the state seal.

Although McNair’s term as governor was not marked by significant legislative enactments, his administration should not be judged a failure. His actions probably reflected the wishes of the majority of Missourians at the time. A constitutional provision prohibited McNair from seeking reelection, so the voters had no chance to register formally their views on his administration.

The economic downturn that followed the Panic of 1819 had ruined McNair financially. With a large family to support, the hard-pressed former governor gratefully accepted a US government appointment as Osage Indian agent. While serving in that capacity he contracted influenza and died on March 18, 1826, leaving his family—including a two-week-old tenth child—nearly destitute. McNair was buried in the Old Military Graveyard in St. Louis but later reinterred in Calvary Cemetery.

———. “McNair.” In The Messages and Proclamations of the Governors of the State of Missouri, ed. Buel Leopard and Floyd C. Shoemaker (Columbia: State Historical Society of Missouri, 1922), 1:3–14.