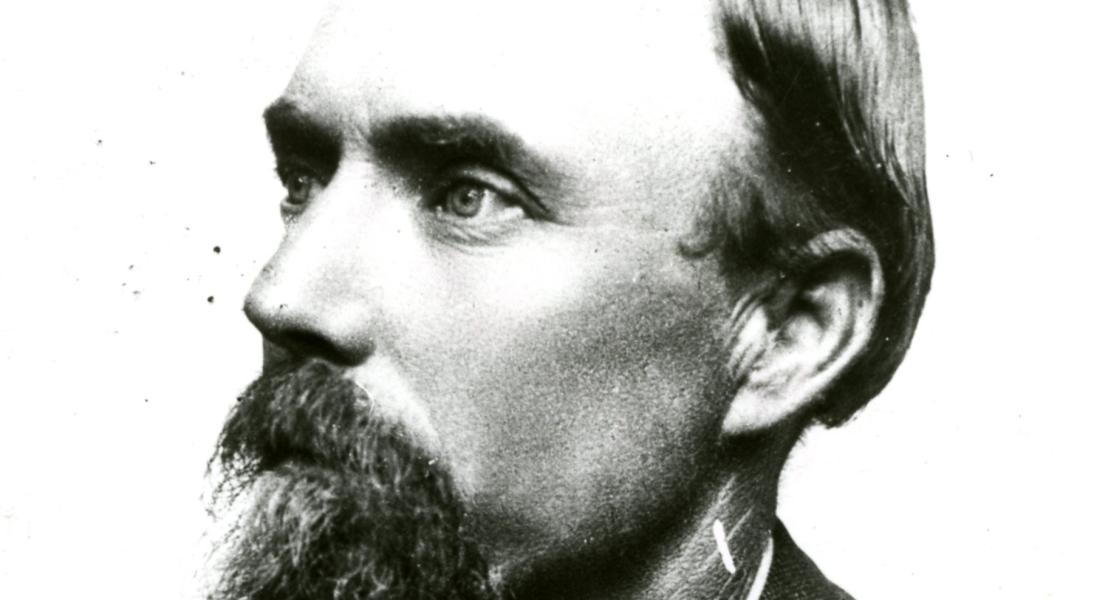 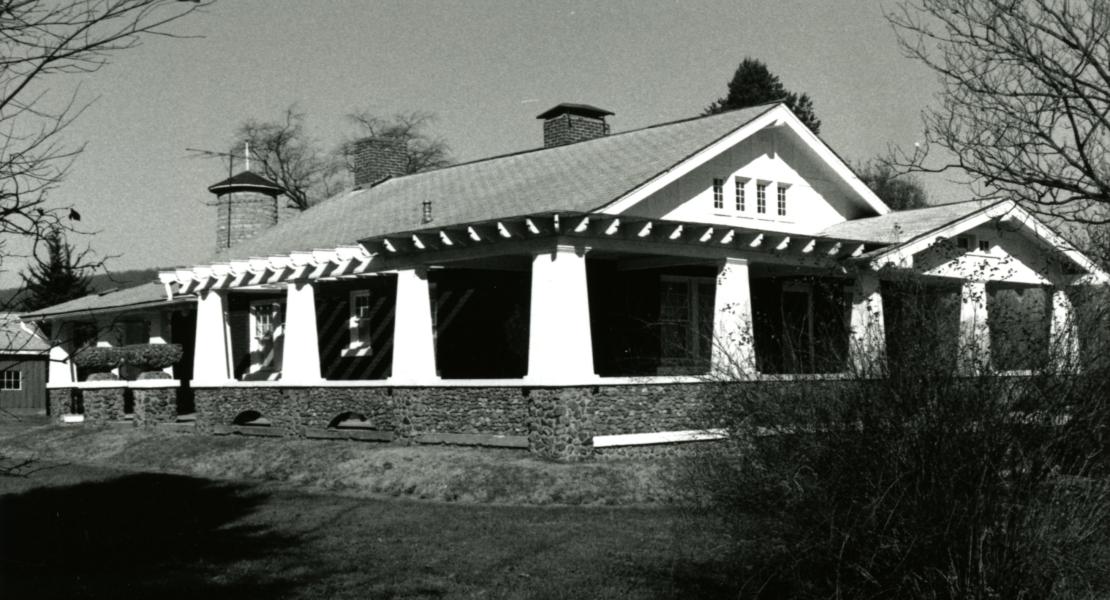 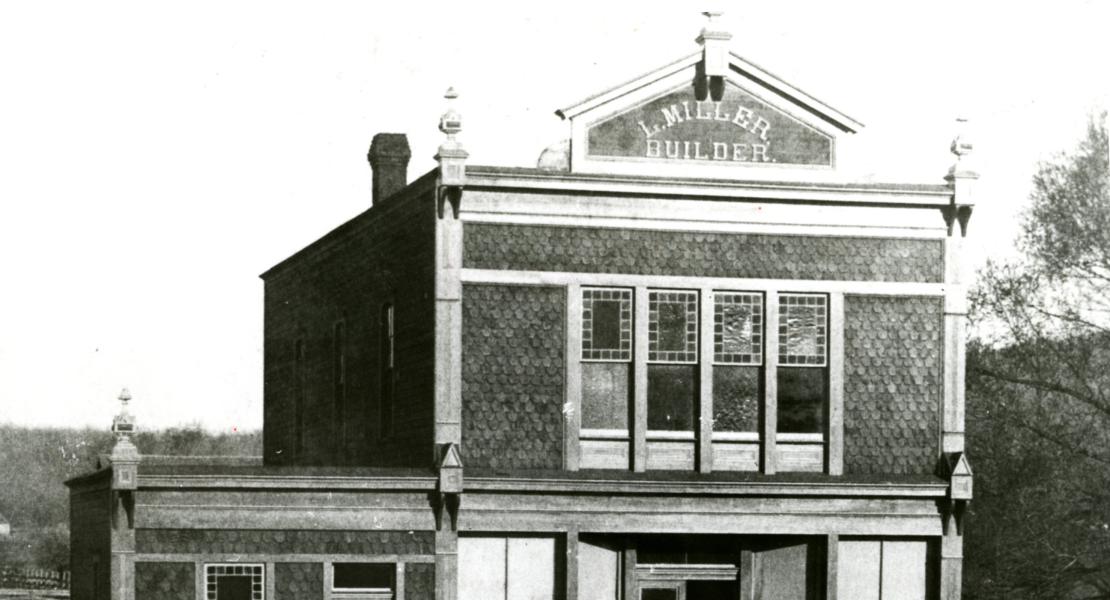 Louis Miller was an influential builder-architect who lived in Arcadia, in Iron County, and was a builder for fifty years in the southeast Missouri Ozarks and the Bootheel. His projects included commercial, governmental, and private buildings; country seats; model farms; water towers; and cobblestone bungalows, all of which were worthy of promotion and imitation.

Born in Jefferson County, Missouri, on October 13, 1853, Miller moved to Arcadia in 1860 with his widowed mother, Joanna, and two siblings. Little is known about his childhood except that Joanna Miller reared her children with the help of another German-born lady, Mary Ernst. Young Louis demonstrated a precociousness for mechanical ability. Perhaps encouraged by his mother’s teachings and the example of a German grandfather who was an architect, Louis attended subscription school for a few years and the Methodist Arcadia high school for eight months.

As a young man, Miller apprenticed under a master builder. As he matured in the business, he subscribed to trade journals; took correspondence courses; developed his own clientele; worked as a subcontractor to famous St. Louis architects William Eames, Thomas Young, and Theodore Link; and published designs in the Journal of Carpentry and Building, Building Age, and the Craftsman. He combined academic blueprints and pattern-book plans with his own notions of natural materials.

Miller represented the craftsman movement in American architecture in southeast Missouri. He promoted environmentally compatible buildings for “village improvement,” constructed naturally textured exteriors and interiors, was concerned that the whole house—front and back—have aesthetic appearances to the viewer, made decorative urns and fences of natural materials (especially cobblestone), employed Japanese design qualities in roof pitch and in gardens, and pleaded in the newspaper for conservative approaches toward management of local natural resources while applauding the moral value of handwork. All these craftsman qualities remain today at his splendid Bethesda Springs bungalow park in Arcadia.

The St. Louis and Iron Mountain Railroad passed through Arcadia southward to the Bootheel and into Arkansas. Miller practiced his trade in the towns along the railroad, often having dozens of men busy in multiple locations. His greatest distinction, though, was as a builder for wealthy St. Louisans who desired summer homes in the Arcadia valley. From the 1880s into the 1920s, this late-Victorian resort society traveled less than ninety miles down the rails on a special “Arcadia Accommodation” train to vacation in fashionable homes there.

During the 1880s, Miller built three estates in Arcadia that made him a prominent contractor and builder-architect for summer homes. First, in 1884, he constructed a two-story frame house for his future in-laws, Joseph and Fredonia Ringo, a Mississippi County planter family with large mercantile and agricultural investments. Second, in 1886, he built his own country seat as a model estate with a great stone water tower. At the corner of his property, he built an office and a carpenter’s finishing shop that faced east toward the railroad depot and St. Louis Lane, which led past farms that would become summer estates. Third, in 1887, General John W. Turner hired Eames and Young to develop his estate; Miller executed the fashionable shingle-style addition to the standing Italianate house. At this latter site, Miller designed a number of outbuildings that served as a model complex imitated throughout the valley. For the next twenty years he built expensive summer homes for the St. Louis trade.

The successful builder-architect was active in the Methodist Church South, became a Sunday school teacher, served as director of the Arcadia school board in 1887, was selected as a Mason in 1892, and was chosen as director of the new Iron County Bank in 1896. Miller built extensively in Farmington, Fredericktown, Bonne Terre, Bismarck, Piedmont, Des Arc, Doniphan, Greenville, Sligo, and nearby Ironton. He consumed enough manufactured brick at those projects to establish his own brickyard in Mount Vernon, Illinois.

In 1903 Miller built one of the most monumental log buildings in Missouri at Sligo for the American Steel and Sligo Furnace Company. The great clubhouse was a hotel, restaurant, and community building. In Arcadia he developed a clubhouse for Clarence Jones on his Maples model farm, including a picturesque stone and wood water tower that remains today as a primary symbol of Miller’s achievements. He joined others to promote Rainbow Dam and Lake Killarney, to secure the Jefferson Barracks Rifle Range, and to advance the purchase and development of the Epworth Methodist Assembly grounds.

In 1916 Miller combined his business with that of his talented builder-engineer son, Louis Miller Jr. The elder Miller retired in 1924 and died on October 21, 1933. Louis Miller Jr. continued his father’s tradition of building craftsman bungalows that give the Arcadia valley a distinctive cultural landscape.