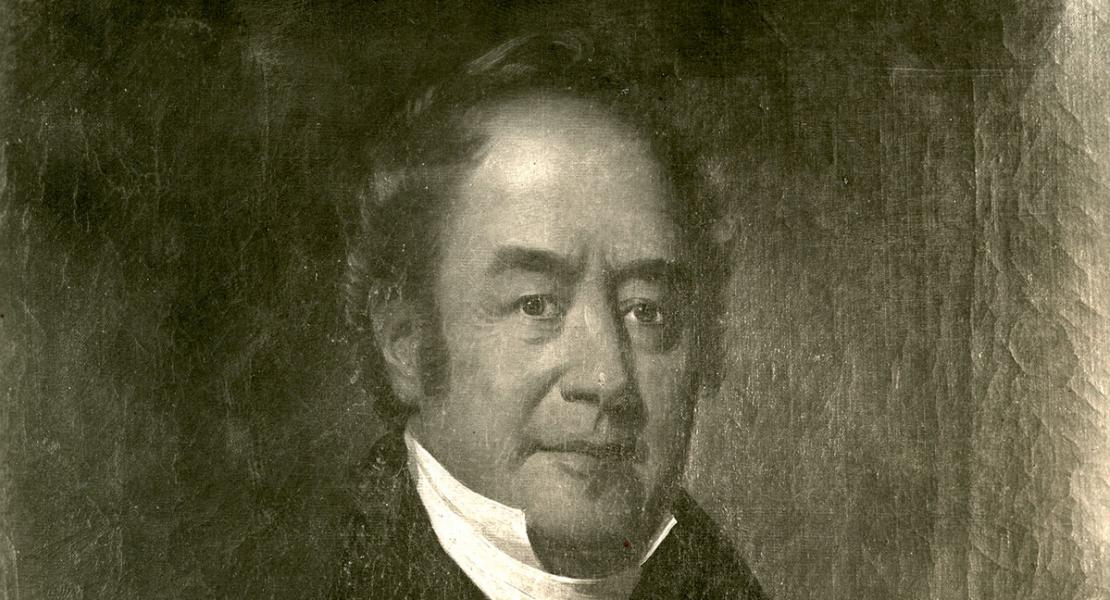 Bernard Pratte’s father, Jean Baptiste, settled first on the east bank of the Mississippi. When France ceded that territory to England, he moved across the river to Ste. Genevieve, where he married Marie Ann Lalumandiere and established himself as a merchant, grain grower, and salt maker. Bernard Pratte, who was born on June 11, 1771, was well educated and trained to take over his father’s mercantile interests. Expanding the family’s business to include fur trading, he was licensed to trade with the Omaha in 1790 and with the Osage in 1794. By 1801 he was trading on the Des Moines River.

In 1794 Pratte married Emilie Sauver, daughter of Silvestre and Pelagie Chouteau Labbadie, thus allying himself with the powerful Chouteau family. Over the next few years he opened a dry goods and grocery store in St. Louis and moved his primary business interests and residence to that town. Active in civic affairs, he held a variety of public offices, including trustee of the town of St. Louis, commissioner of rates and levies for the St. Louis district, militia captain, school board member, and judge of the court of common pleas. In 1815 he was commissioned brigadier general of the territorial militia. He was a member of the 1820 Constitutional Convention and was appointed US receiver of public monies for St. Louis in 1825.

Pratte continued both his mercantile and his fur-trading activities. The various realignments of the St. Louis traders to protect their interests on the Missouri River from American and Canadian interlopers produced in 1823 the firm of Bernard Pratte and Company, popularly known as the “French Company.” This alliance of Pratte, Jean Baptiste Cabanné, Pierre Chouteau Jr., Bartholomew Berthold, John B. Sarpy, and others united old rivals in an aggressive company that drove its opponents from the river. The partners, however, suffered some setbacks, as when at Cabanné’s urging they attempted to break into the southwestern fur trade.

Pratte’s eldest son, Sylvestre (born in 1799), who had been trading on the Missouri River perhaps as early as 1816, was sent to New Mexico in 1825 to establish company operations there. Chronic trouble with Mexican officials and depredations by hostile Indians and rival trappers in the mountains, combined with Sylvestre Pratte’s poor management, doomed the project. Completing the disaster, the younger Pratte died in 1827 while leading a trapping party near the headwaters of the Platte.

On the Missouri River, by contrast, Bernard Pratte and Company proved so successful that John Jacob Astor’s American Fur Company could not force the partners out, and so was forced to buy them in. After years of negotiations (during which Ramsey Crooks of the American Fur Company married Bernard Pratte’s daughter Emilie), the two companies merged in 1827, with Bernard Pratte and Company thereafter acting as Astor’s agent on the Missouri. When Astor retired from the fur trade in 1834, the company bought his Western Department and reorganized as Pratte, Chouteau, and Company.

By this time Pratte’s second son, Bernard Pratte Jr. (1803–1896), was well established in the family business. He strongly supported innovations proposed by Pierre Chouteau Jr., such as replacing the company’s keelboats with the new steamboats or hosting notable travelers such as the artist George C. Catlin as a public relations gesture, over the objections of his more cautious father. When the elder Pratte gradually retired from active involvement in company business, the younger took over as captain of the company’s second steamboat in 1833.

The elder Bernard Pratte died on April 1, 1836, and under the partnership agreement Pratte, Chouteau, and Company terminated with the peltry return of 1839. The new firm of Pierre Chouteau Jr. and Company was organized without a Pratte among the partners: Bernard Jr. had withdrawn from the company in 1838 to serve in the Missouri legislature. In 1841 he and Jean Charles Cabanné (son of Jean Baptiste Cabanné) organized a rival company, which Chouteau drove off the river by 1845.

Bernard Pratte Jr. thereafter devoted his attention to his business interests in St. Louis. He was twice elected mayor of the city (1844 and 1845) on the Whig slogan “Henry Clay and Protection of American Industries.” Characteristically, he advocated modern improvements: gas streetlights were installed, and the levee was paved with stone during his administration. He served as a director of the Bank of the State of Missouri, and like his father held various civic offices over the years. In 1850 he turned his St. Louis business over to the eldest of his seven children, a son also named Bernard Pratte, and retired to his farm in Montgomery County with his wife of twenty-six years, Louise Chenie Pratte.