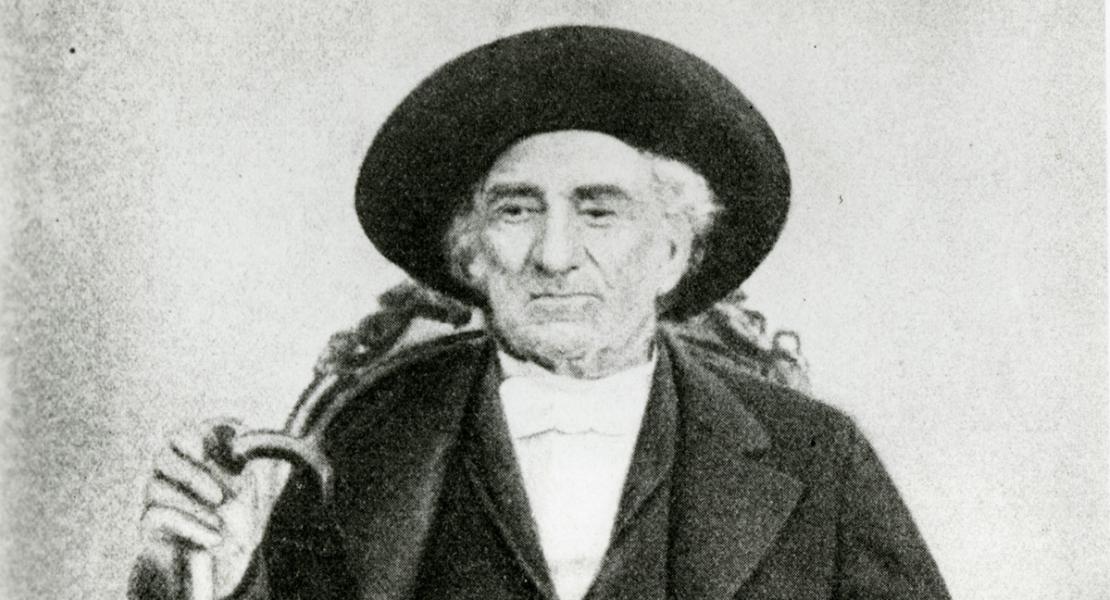 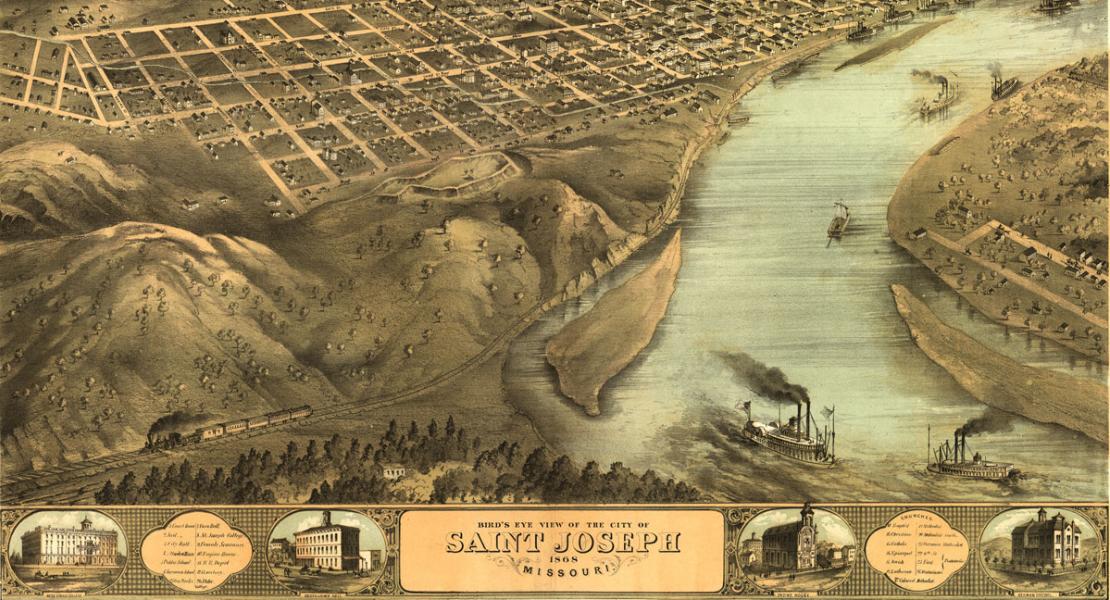 Joseph Robidoux III, the eldest son of a large family, was born in St. Louis on August 10, 1783, to Joseph and Catherine Rollette Robidoux. The senior Robidoux was active in the trade of the Missouri River in the 1790s and early 1800s, concentrating his energies in the vicinity of Council Bluffs among the Iowa, Pawnee, Otoe, Omaha, and Missouri tribes. At sixteen, young Joseph apprenticed to his father and embarked upriver to winter in the general area of northwestern Missouri, probably with the Missouri tribe. He married Eugenie Deslisle of St. Louis in 1800, but was soon widowed after a son, Joseph IV, was born. Robidoux returned to “La Post du Serpent Noir” built in 1803, which was the Blacksnake Hills post later named St. Joseph, Missouri, a locality closely associated with the Robidoux clan for the next half century. Here in 1805 Joseph Robidoux fathered a child, Mary, by an Indian woman. This daughter would marry chief White Cloud of the Ioway.

When the senior Robidoux died in 1809, most of his estate was sold to pay the debts incurred in the fur trade. Joseph Robidoux III now assumed responsibility as the family’s patriarch, directing and supporting the far-flung commercial activities of his young siblings: François, Antoine, Louis, Michel, and Isidor. As head of this adventurous, ambitious, entrepreneurial, and resourceful clan, he has aptly been described as the “kingpin of the prolific and energetic Robidoux family” by his biographer Merrill Mattes.

Like their contemporaries, the sons of other leading merchant-trader families of St. Louis such as the Papins and the Chouteaus, the Robidoux brothers were displaced by incoming Anglo-Americans in the years after the War of 1812 and were drawn westward to seek their fortunes. These French Creoles were highly mobile and often polygamous. Joseph Robidoux remarried in 1814 to a St. Louis woman, Angelique Vaudry, by whom he had eight children, while simultaneously engaging in multiple “country marriages” to Indian women, primarily Otoes and Ioways. Six children born from these relationships received allotments on the Nemaha Half-Breed Reserve according to the terms of the 1830 Treaty of Prairie du Chien.

A vigorous contender in the Council Bluffs trade, Robidoux was in partnership with Alexander LaForce Papin in 1818 and in 1819 was the resident trader (or factor) for Pratte, Chouteau, and Company, also known as the French Company, at their Otoe post. Simultaneously, he and younger brother François operated a store in St. Louis, a partnership that dissolved in 1820.

Robidoux was one of the first to realize the commercial possibilities of the Santa Fe trade after Mexico won independence from Spain in 1821. He launched an expedition from the Otoe post in 1822 following a change in Mexican trade policies. Jean Baptiste Cabanné replaced Robidoux at the Otoe post in 1823. Historians have often been confused about this period in Robidoux’s life because his relationship to the French Company after 1823 is unclear. Apparently, French Company officials initially regretted becoming involved in his profit- and risk­-sharing western venture and criticized his actions. Robidoux persisted, finding other financial backing with which to outfit his brothers for expeditions to Mexican territory and to the Rocky Mountains for beaver hunting between 1823 and 1825, thus challenging the French Company’s pretense to monopoly. Meanwhile, he cut into Cabanné’s share of the Council Bluffs trade. Robidoux’s initiative and obstinacy, along with his familiarity with Indian languages, his experience, his kin connections, and his willingness to traffic in contraband alcohol, gave him advantages over the better-capitalized French Company. As historian Annie Abel has aptly described this era of fur-trading activities on the Missouri River, “keenness of competition [was] measured by the amount of liquor distributed.” Robidoux outmatched his rival, the hard-pressed Cabanné, who wrote to Pierre Chouteau Jr. repeatedly accusing Robidoux of unethical business practices, moral debasement, and perfidy. In one letter he said that Robidoux was “truly wicked, cunning, cheating, and a rogue.”

When the French Company temporarily merged with the Western Department of Astor’s American Fur Company from 1826 to 1834, Robidoux with brother Michel and Jean Baptiste Roy conducted a successful opposition from 1826 to 1828, getting licenses to trade along the Missouri River from Council Bluffs to the Blacksnake Hills. In the fall of 1828, the French Company came to a financial settlement, paying Robidoux $3,500 for his outfit and a salary of $1,000 for two years to stay out of the Indian country. In a brief period of retirement, Robidoux devoted himself to the family’s bakery business in St. Louis while supporting his younger siblings’ entrepreneurial endeavors, such as Antoine’s construction of the Uncompahgre trading post in southwestern Colorado.

By the early 1830s Robidoux was back in the Council Bluffs trade, stationing himself once again in the Blacksnake Hills post, which he bought rights to for $500. He rejoined the French Company and faced the opposition of his former partner, Jean Baptiste Roy. Unquestionably, Robidoux and Roy contributed a share of the lethal volumes of alcohol that debauched local and emigrant tribes at the Bluffs, the “whiskey capital of the East” in the 1830s and 1840s.

Robidoux’s Blacksnake Hills post, a substantial log structure, was a staging area for western fur-­trading expeditions, and he employed several traders and trappers in the 1830s and 1840s. As the fur and whiskey trade collapsed, Robidoux, like other former merchant-traders, resourcefully availed himself of newer opportunities and reaped profits in the sale of town lots.

Following the Platte Purchase, the Robidoux post became the nucleus for the multiethnic community of St. Joseph, Missouri. After gold was discovered in 1848, St. Joseph became the jumping-off place for overlanders going to California. It also served as a home base and staging area for the family trading ventures along the Platte River in the Scott’s Bluff and Fort Laramie trading zones of Wyoming in the 1840s and 1850s.

St. Joseph prospered, and Joseph Robidoux was its leading citizen in civic and financial affairs, but visiting missionaries left disapproving reports of polygamy, gambling, and excessive drinking at his establishment. William McClurg Paxton, a visitor to Robidoux’s home in November 1839, said that behind the trading house were five scaffolds on which the bones of Robidoux’s many children by Indian wives were laid. In 1850 Rudolph Kurz claimed Robidoux was living with his sixty “papooses.” (Many of these children were likely progeny of his brothers or sons.)

Little is known about Robidoux’s declining years. According to one report he faced financial hardship because of his many dependents and because of his gambling debts in St. Joseph; he reputedly locked his alcoholic son Joseph Robidoux IV in a cellar until he deeded over the fortune in St. Louis town lots that he had inherited from his mother. Joseph Robidoux died on May 27, 1868, at age eighty-four at the family home in St. Louis and was buried there.

Tanis C. Thorne is retired from the Department of History at the University of California, Irvine.

Thorne, Tanis C. The Many Hands of My Relations: French and Indians on the Lower Missouri. Columbia: University of Missouri Press, 1996.