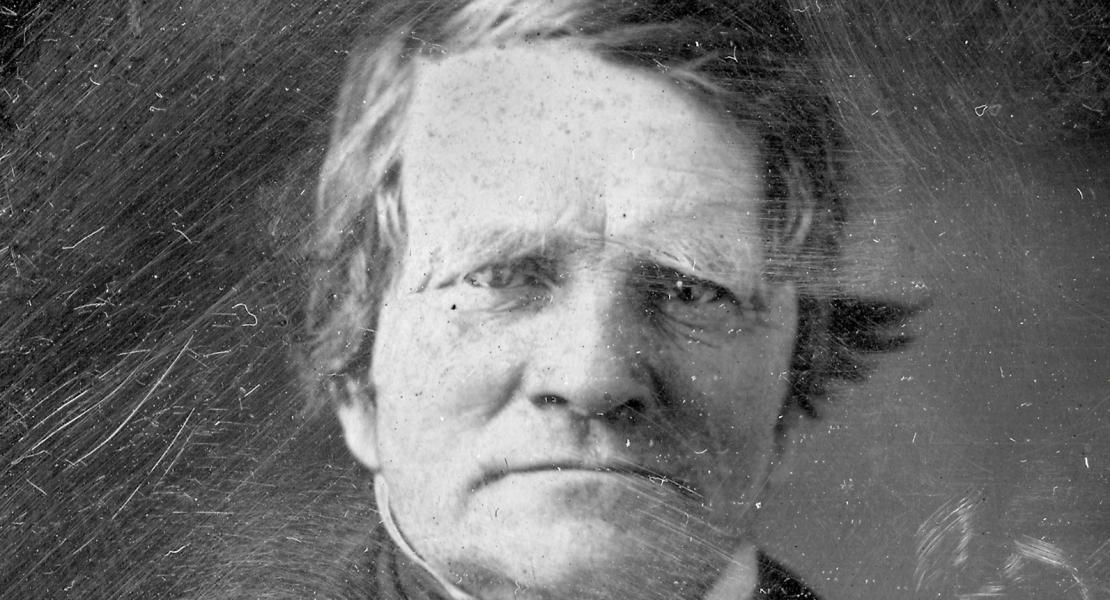 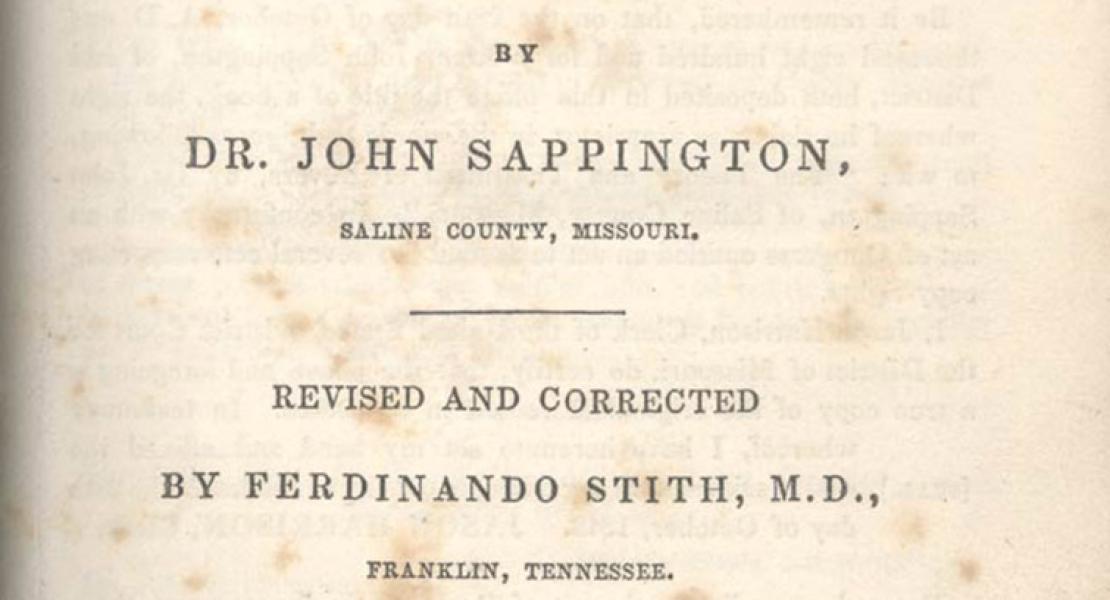 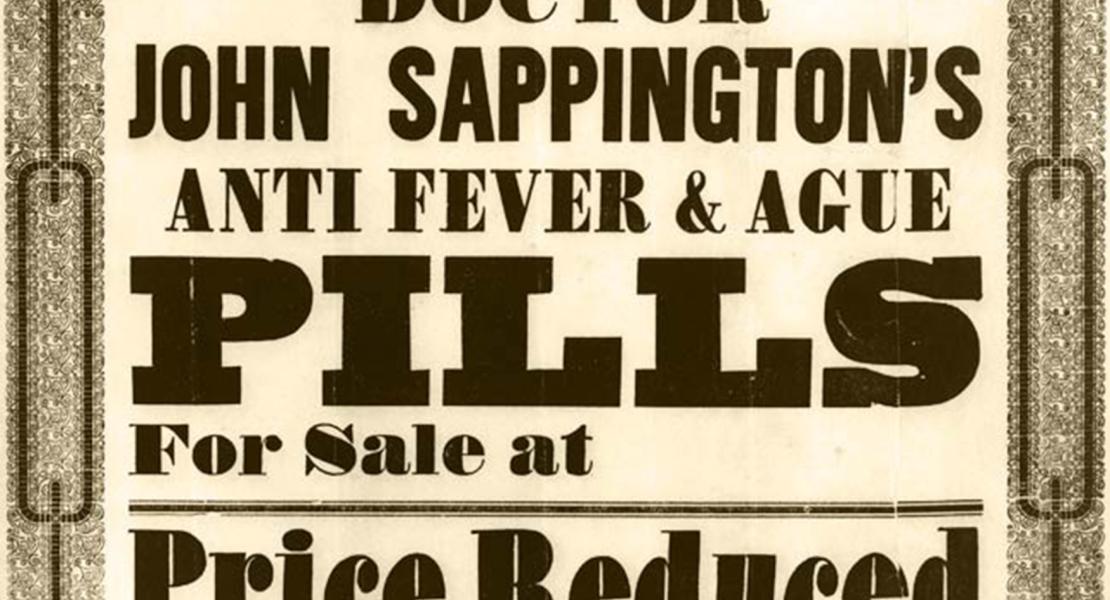 John S. Sappington was a frontier physician in Tennessee and Missouri who became wealthy and famous as the creator and dispenser of “Sappington’s Anti-Fever Pills,” a quinine-based patent medicine for malaria and for fevers in general.

Sappington’s family hailed from Maryland, where he was born on May 15, 1776. Several family members were early American doctors. An uncle received a political appointment as justice in the new town of Nashville and in 1785 brought brother Dr. Mark B. Sappington’s family to middle Tennessee. The extended family engaged in land speculation and commercial agriculture, and Mark trained all four of his sons in the medical arts. About 1802 his son John removed to Franklin, Tennessee, where he became a successful planter, village leader, and physician.

In 1817, acting upon the advice of his friend Thomas Hart Benton, John Sappington scouted Missouri Territory looking for opportunities in land speculation. With a significant loan from Benton, Sappington moved his family to Howard County, Missouri, investing in several thousand acres in what has since become Saline County. In 1819 he located a few miles west of Arrow Rock, where he remained for the rest of his life.

The doctor became a source of intelligence for new immigrants to the Boonslick region, advising on lands to purchase and acting as a money lender to many. Sappington continued his commercial agriculture business, exporting cotton, tobacco, livestock, and lumber to New Orleans, while marketing his own medical services throughout the Boonslick counties and into northwest Missouri. By 1824 he and his family established a company business, Pearson and Sappington, at Jonesborough (now Napton), in Saline County, as a center for their commercial businesses and opened another store in Arrow Rock. They engaged in the Santa Fe trade, continued land speculation, managed tenant contracts for commercial agriculture, loaned money, milled grain and lumber, and manufactured salt. The business demanded the hiring of collection agents and the retention of lawyers for litigation. Profits encouraged Sappington to consider retiring from medicine in 1828.

Instead, Sappington continued what family members sometimes referred to as “his hobby” and hired others to work for him. In 1826 trader and planter Meredith Miles Marmaduke married Sappington’s daughter Lavinia, eventually becoming the family business manager, and in 1830 Dr. George Penn became a major business and Jacksonian political ally.

By 1832 Sappington had discovered a workable chemical formula that included quinine and packaged it as a patent medicine that he marketed across Missouri. Within three years his success prompted him to create another family company, Sappington and Sons, to distribute his product nationally, becoming the first proprietary in the United States to use quinine to treat malaria. He assigned Missouri and Tennessee relatives to oversee sales in particular geographic regions, and they in turn hired additional route salesmen to travel the country from the Great Lakes to the East Coast, and especially to the Deep South. Sappington also added Dr. William Price to his business. Price’s own marketing ideas helped expand the business as merchants throughout the country became agents for the antifever patent medicine.

In a time when most entrepreneurs had extreme difficulty, Sappington generated a large cash flow during the panics of 1837 and 1839. Expanding their land speculation, the family purchased thousands of acres in the Osage River valley. Sappington hired another physician, C. M. Bradford, into the company, and as the accounts grew they hired more lawyers to collect them. The most troublesome issue during this period became counterfeit pills manufactured by pharmacists and doctors from Michigan to Mississippi. Some imitations led to patient deaths, and severe criticism toward Sappington erupted from the professional medical establishment in the Ohio River valley.

In 1844 Sappington published his Theory and Treatment of Fevers, much to the chagrin of family members. The book revealed that Sappington used quinine, a much-feared drug, and recommended that the general population manufacture their own pills using his formula. By now, due to the successful use of quinine in the Seminole Indian Wars of 1835–1842, many physicians were experimenting with large doses of quinine and publishing articles in debates over its efficacy. In 1844 Sappington also divided his national business into four separate companies, allocating all business assets to his children, grandchildren, and in-laws.

The sixty-eight-year-old doctor then turned his attention to agricultural estate building and by 1850 managed some seventy-four tenant farms in Saline County. His own Pilot Hickory seat became a leading stock farm in the Boonslick area. He continued lending significant amounts of money, including loans to the Cooper County court to build a bridge and to the new State Agricultural Society to capitalize the fairgrounds at Boonville. He established the Sappington School Fund that later attracted Missouri Valley College to Saline County, and distributed some $120,000 in resources to his children.

Through all of Sappington’s economic success he remained a close ally and friend to Thomas Hart Benton and the Boonslick Democracy. His sons-in-­law Miles Marmaduke and Claiborne Fox Jackson and grandson John Sappington Marmaduke all became Missouri governors. George Caleb Bingham painted his portrait three times, and his family cemetery at Pilot Hickory is currently a state historic site. Sappington’s career as an entrepreneurial physician is unique in American frontier history. He died on September 7, 1856.

Terry, Robert J. “Dr. John Sappington: Pioneer in the Use of Quinine in the Mississippi Valley.” Proceedings of the Tercentenary Celebration of Cinchona (1931): 164–80.