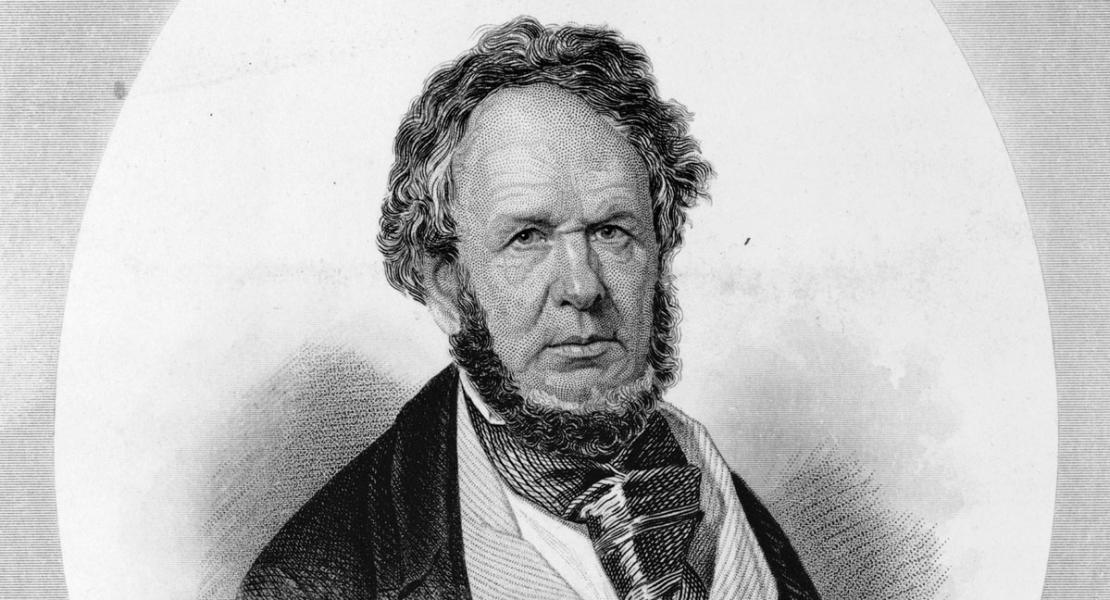 Henry Rowe Schoolcraft has a deserved reputation as an accomplished scientist-explorer who began his career in the Ozarks. He made an epic journey through the interior Ozark region and published the first book-length descriptions of the environment and early settlement.

Schoolcraft was born near Albany, New York, on March 28, 1793, and at an early age embraced the literary arts. He wrote poetry and magazine articles, sought intellectual society, and cultivated a reserved, reflective, somewhat humorless personality. He attended college in Vermont, enthusiastically studying mineralogy and geology. His father was superintendent of a glassworks in New York, where Henry learned the trade and became part of the management. Over the next eight years, he worked for New England glasswork companies, but by 1817 he was bankrupt.

In March 1818 Schoolcraft left New York, seeking work in his trade in Pittsburgh and Cincinnati, but in August he landed in Missouri Territory, where he met Moses Austin in Potosi. Before long Schoolcraft began to draft a scientific survey of Missouri lead mining, and Austin provided space at his residence, Durham Hall, for him to store minerals and conduct experiments. Schoolcraft’s months of work convinced him to explore the southwestern hinterlands to authenticate mineral legends and offer a scientific survey to the federal government.

Levi Pettibone, a former acquaintance in New York, accompanied Schoolcraft on the survey that lasted from November 1818 to February 1819. Their many misadventures—becoming lost, going without food, and suffering injuries—were a testament to the unmapped lands and their own inexperience as outdoorsmen. Once back in Potosi, Schoolcraft finished his manuscript, collected his mineral specimens, and went back to New York, where he advertised his Mississippi Valley ore samples for sale and concluded plans for A View of the Mines, published in December 1819.

Anxious over his debts in Missouri and New York, Schoolcraft suggested that new legislation be passed to reorganize the mining industry to correct widespread injustices. He proposed a new superintendent of mines in Missouri as part of the solution. Contemporary scholars praised his new scientific work, and in Washington, DC, Schoolcraft sought government employment, including possibly the proposed Missouri superintendency.

Instead, John C. Calhoun, the US secretary of war, rewarded Schoolcraft with an explorer’s post on a new expedition to explore Lake Superior and the upper Mississippi regions. In 1820 Schoolcraft accompanied Lewis Cass, governor of Michigan Territory, to gather scientific knowledge about the Great Lakes region. For the next twenty years he worked feverishly, establishing himself as a pioneering scholar on the frontier. The scientist-explorer described mining techniques, flora and fauna, geography and geology, and Native American culture. Eventually, he authored thirty books of scientific and anthropological value. Practically all his book ventures, however, were financial failures. His security came from his government appointments.

The young Schoolcraft, whether in the Ozarks or the Great Lakes, denigrated white hunters and Indians as illiterate savages and drunkards, while ignoring farmers, merchants, and entrepreneurs. He serialized his second travel work, Journal of a Tour into the Interior of Missouri and Arkansaw, in an eastern publication and printed it as a book in 1821. By then, however, he was deeply involved in the northern territories.

In 1822 Schoolcraft received an appointment in the new Indian agency at Sault Ste. Marie serving tribes in modern Michigan, Wisconsin, and Minnesota. Once there he began to meet Anglicized Indians who farmed and lived in log houses. More important, he met and, in 1823, married an Indian woman who had a European education and her own literary talent, and Schoolcraft began to change his view of aboriginal people. The young couple began a family as Schoolcraft intensified his lifelong interest in religion. The loss of his son in 1827 devastated him, and he sought comfort in religious studies. By 1831 the potential for evangelical work among the Indians dominated his thinking, as it would his work for the rest of his life.

In 1832 a Schoolcraft expedition discovered the Lake Itasca region, the source of the Mississippi River. Unfortunately, some questionable administrative decisions Schoolcraft made during the journey overshadowed this most famous accomplishment of his career. Schoolcraft continued his work, however, moving to the Mackinac Island in 1833. He served four years in the territorial legislature, and when Michigan became a state in 1837 the federal government appointed him as state superintendent of Indian affairs.

Schoolcraft retained government employment on the frontier until the 1840 Whig presidential victory led to his dismissal the following year. He left Mackinac for New York, traveled extensively in Europe, and moved to Washington, DC, to devote the rest of his life to literary pursuits. In 1839 he had published Algic Researches, which influenced Henry W. Longfellow’s writings, and during the 1850s Schoolcraft finished his famous six­-volume work, Historical and Statistical Information Respecting the History, Condition, and Prospects of the Indian Tribes of the United States. These books secured a lasting reputation for him as a pioneer in American ethnography. Schoolcraft’s fieldwork in documenting Indian myths and tales made him the “father” of American folklore.

Schoolcraft’s national significance lies in his work in the Great Lakes region. His writings on the Ozarks, his first work, were highly selective and prejudicial, responsible, in part, for the negative stereotyping of an American region. His published work about the settlements in southern Missouri and northern Arkansas, some lying along the international boundary of the United States and the Cherokee Nation, needs to be reissued with a scholarly commentary about his observations of the cultural and natural worlds he encountered in 1818–1819. Schoolcraft died on December 10, 1864.

Blevins, Brooks. A History of the Ozarks, Volume 1: The Old Ozarks. Urbana: University of Illinois Press, 2018.

Lankford, George E. “‘Beyond the Pale’: Frontier Folk in the Southern Ozarks.” In The Folk: Identity, Landscapes, and Lores, ed. Robert J. Smith and Jerry Stannard, 53–70. Lawrence: Department of Anthropology, University of Kansas, 1989.

Schoolcraft, Henry Rowe. Journal of a Tour into the Interior of Missouri and Arkansaw from Potosi, or Mine á Burton, in Missouri Territory in a South West Direction, toward the Rocky Mountains: Performed in the Years 1818 and 1819. London: Sir Richard Phillips, 1821.

———. Scenes and Adventures in the Semi-Alpine Region of the Ozark Mountains of Missouri and Arkansas which Were First Traversed by DeSoto in 1541. Philadelphia: Lippincott, Grambo, 1853.

———. A View of the Lead Mines of Missouri: Including Some Observations on the Mineralogy, Geology, Geography, Antiquities, and Soil, Climate, Population, and Productions of Missouri and Arkansaw, and Other Sections of the Western Country. New York: Charles Wiley, 1819.