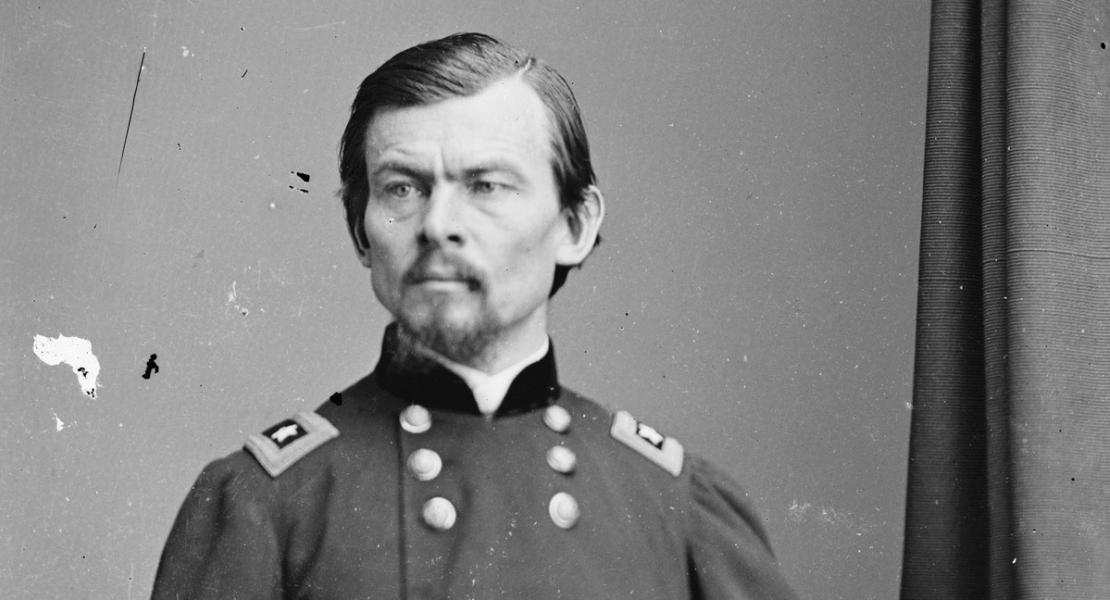 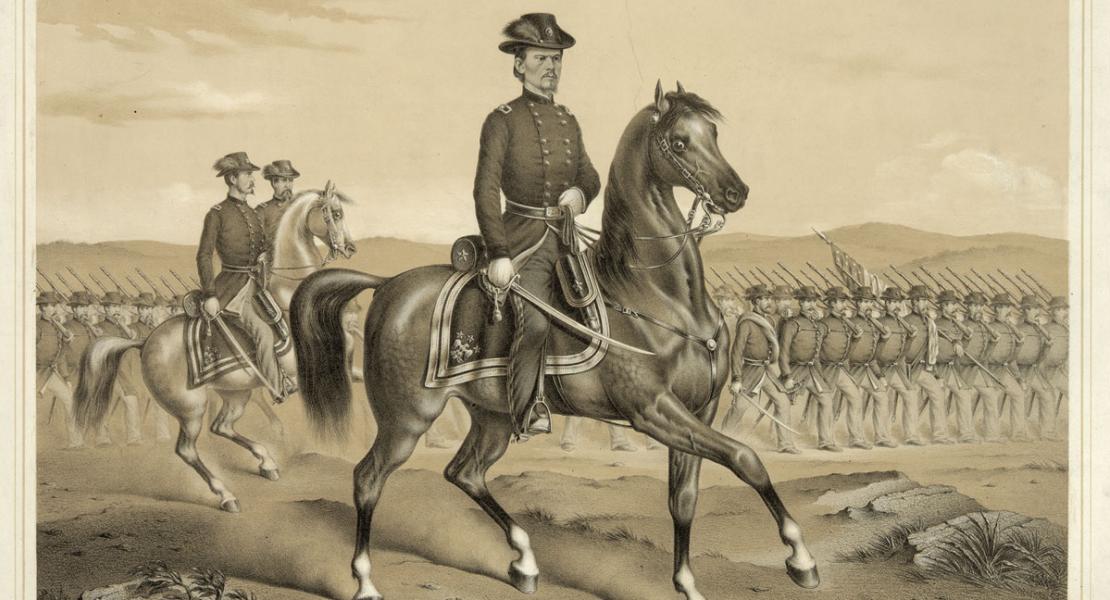 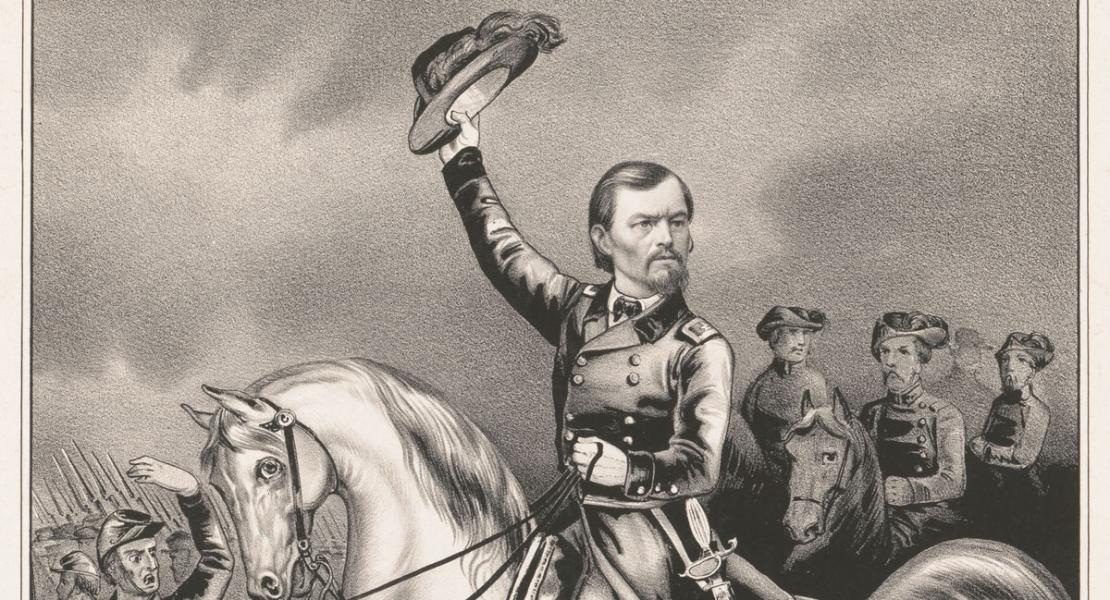 Franz Sigel, a soldier, editor, and public official, was born in Sinsheim, Baden, on November 18, 1824. He was a leader in the German revolution of 1848–1849 and was forced into exile when it failed. In May 1852 he moved to the United States and settled in New York City, where he worked as a tobacconist, surveyor, teacher, and musician. In 1855, with his father-in-law, Rudolf Dulan, Sigel formed the German-American Institute, where he taught mathematics, history, and languages. He also taught in the public schools and the German Turner Society, belonged to the Fifth New York Militia, and wrote for the New Yorker Staats-Zeitung and the New York Times. In 1857 he moved to St. Louis to teach at the German-American Institute there.

When the Civil War broke out, Sigel was instrumental in rallying Germans to join the Union army and was commissioned a colonel of the Third Missouri Infantry. He played a prominent but undistinguished part in the Battle of Wilson’s Creek on August 10, 1861. His bold but ill-fated flanking maneuver in this battle, however, became synonymous with Union failure. When Henry Halleck, commander of the Missouri Department, replaced him with Samuel Ryan Curtis in the winter of 1861, Sigel resigned from the army, which caused considerable uproar in the German American community. In early 1862 he returned to the army and partially redeemed himself by playing a prominent role in the Union victory at the Battle of Pea Ridge on March 7–8, for which he was promoted to major general. In May he was transferred to the eastern theater and took command of a division of Nathaniel P. Banks’s troops at Harpers Ferry and fought in the Shenandoah Valley against Thomas J. “Stonewall” Jackson.

When the War Department created the Army of Virginia in the summer of 1862, Sigel received his first significant command. He was ordered to take charge of the newly designated First Corps of the new army, composed of troops from John Charles Frémont’s Mountain Department. Sigel fought in the Second Battle of Bull Run and later operated in and around the Shenandoah Valley. In January 1863 the War Department disbanded the Army of Virginia, and Sigel’s First Corps was reintegrated back into the Army of the Potomac as the Eleventh Corps.

In February Sigel took an extended leave of absence from the army and traveled to New York City, where he gave numerous political speeches in support of the Republican Party. Although he wanted to return to the army to participate in the upcoming campaign, he lobbied to increase the size of his corps. Henry Halleck, then President Lincoln’s chief of staff, refused Sigel’s demands, and Sigel resigned from the army for the second time. He remained in New York City and continued to lobby for a more prominent command. Finally, in April, at the urging of several friends, Sigel rescinded his resignation and planned to return to his old command in Washington. Frustrated over Sigel’s pettiness, Halleck had no use for him. Thus, Sigel missed the opportunity to command the Eleventh Corps at Chancellorsville in May. He eventually returned to the army in the summer of 1863 and was assigned to the District of Lehigh, Pennsylvania, in the Department of the Susquehanna.

More political lobbying won Sigel a more significant command in February 1864 with the Department of West Virginia, which included the lower Shenandoah Valley. On May 15 he fought John C. Breckinridge’s Confederates at the Battle of New Market and was defeated. He was then assigned to the defense of Harpers Ferry and the Baltimore and Ohio Railroad, but was unable to keep the Confederates from inflicting serious damage to either. He was relieved on July 8, 1864, and spent the last year of the war in Baltimore and Washington hoping for another command. On May 4, 1865, he resigned his commission in the Union army.

Sigel returned to New York City after the Civil War and in 1869 worked for the Brooklyn Steamship and Emigration Company and the Metropolitan Railway. In June 1870 he was appointed internal revenue collector for the New York Ninth District by President Ulysses S. Grant. Elected to one term as register of the city in 1871, he served during Grover Cleveland’s presidency as chief clerk in the county clerk’s office from May 1885 to June 1886, and as pension agent for the New York District from March 1886 to May 1889. After retiring from politics, Sigel published the New Yorker Deutsches Volksblatt and edited the New York Monthly from 1897 to 1900. He died in New York City on August 22, 1902.

In 1906 an equestrian statue of Sigel was dedicated in Forest Park in St. Louis. That same year, the Franz Sigel School was dedicated in Lafayette Square in his honor. In New York City a bronze equestrian statue of Sigel was erected in 1907 and a park in the Bronx was named for him. During World War II he was one of thirty-three Missourians honored by having a Liberty ship named for him. In 1998 Sigel, along with other Forty-Eighters, was honored at the 150th anniversary of the German Revolution at the Badisches Landesmuseum in Karlsruhe, Germany.

Stephen D. Engle is professor of history and director of the History Symposium Series at Florida Atlantic University.