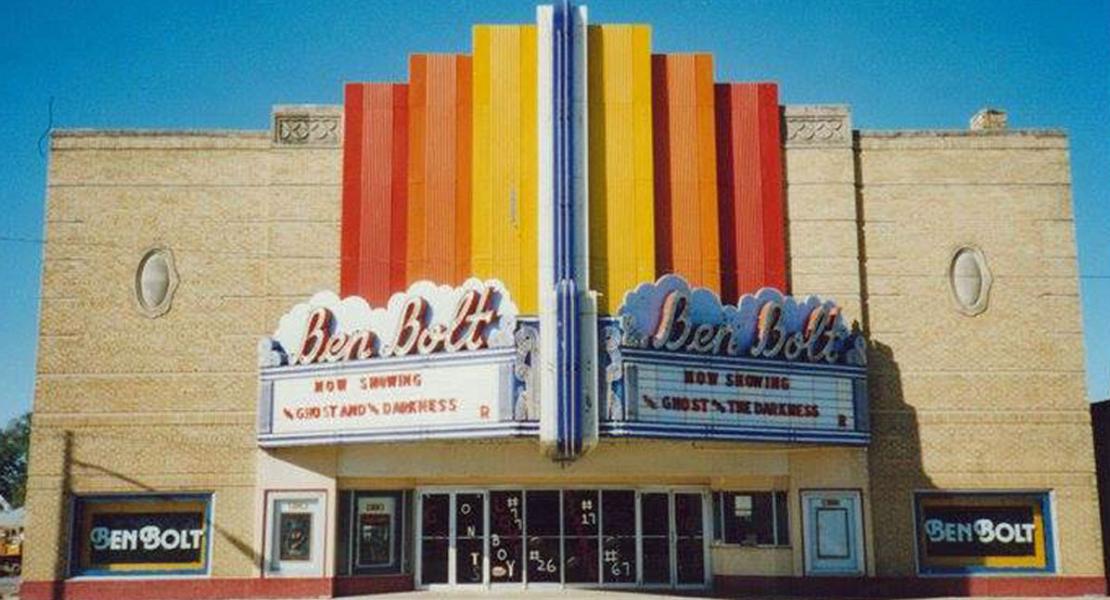 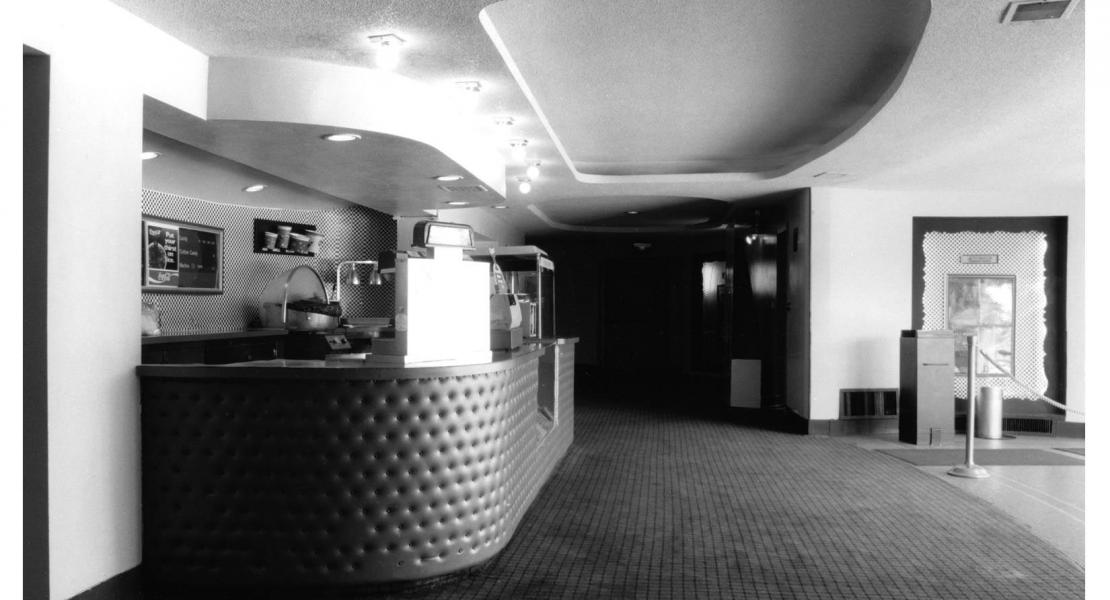 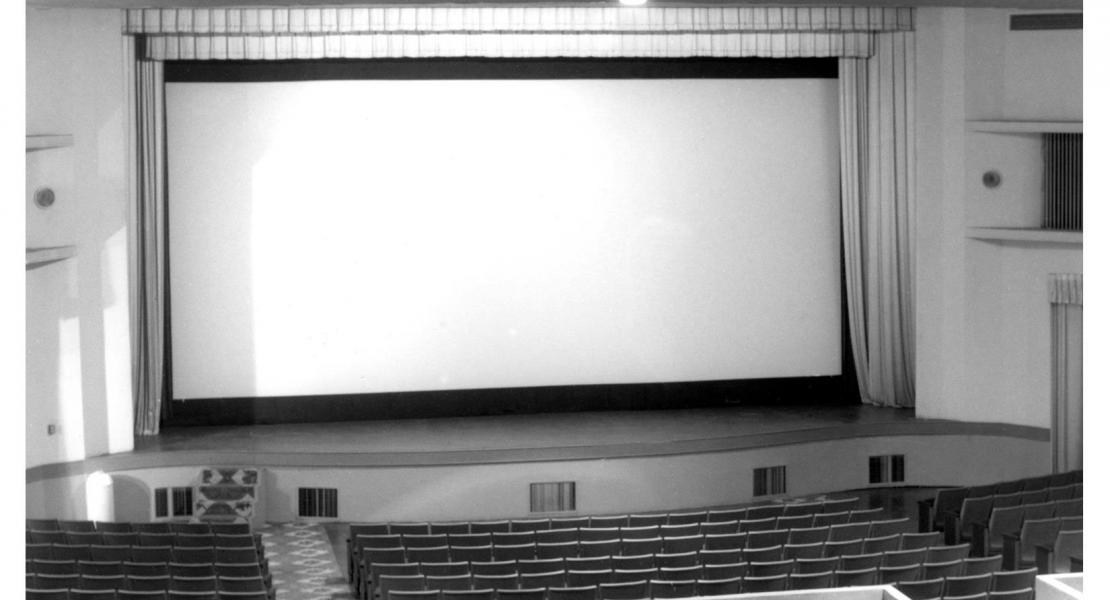 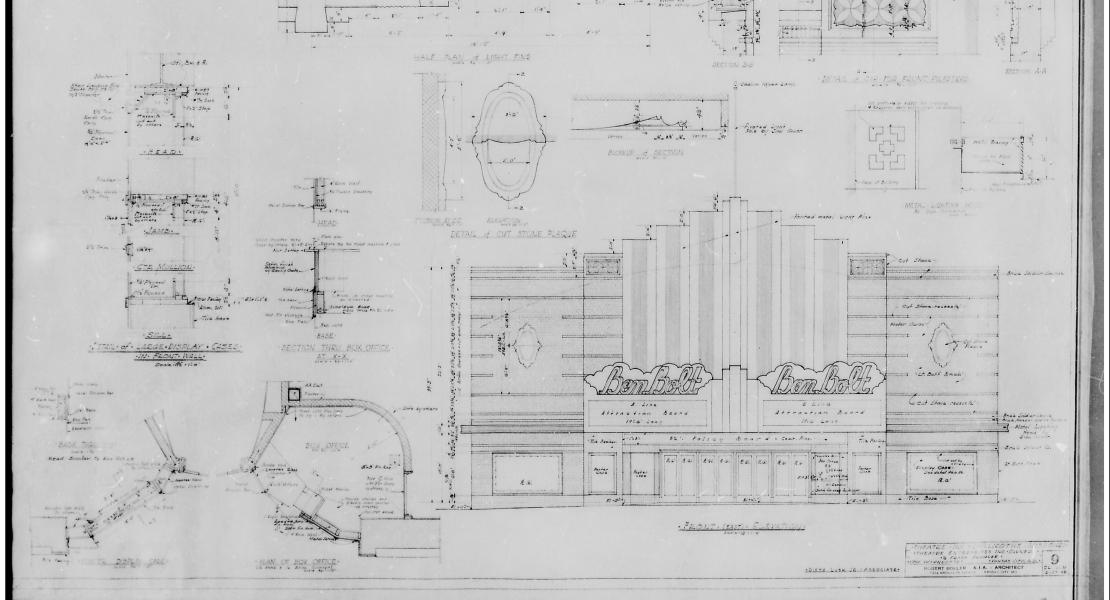 The Ben Bolt Theatre was a spectacular building that stood for half a century as a notable landmark in northeast Missouri. Located at 828 Washington Street in downtown Chillicothe, the Ben Bolt was designed by Robert Boller and Dietz Lusk Jr. of the Boller Brothers architectural firm in Kansas City, which specialized in theaters. It included state-of-the-art features as well as unique artwork when it was built in the late 1940s. For many years it was the main theater in the area. Its demolition in 1999 marked the end of an era for Chillicothe.

According to the Ben Bolt opening program, now housed at the Grand River Museum, businessman John Irvin had a “deep desire” to build his dream movie theater for his hometown. In 1931 he became involved in running two Chillicothe movie theaters, the Empire and the Strand. From 1934 to 1939 Irvin worked in construction in Kansas City, but he returned to Chillicothe, and by the late 1940s he was operator of the Irvinbilt Construction Company. When construction began on the Ben Bolt Theatre in 1948, Irvin served as the construction manager.

The story of the Ben Bolt’s opening covered the entire front page of the August 16, 1949, issue of the Chillicothe Constitution-Tribune. The theater boasted the best available sound and projection equipment of the day. It had one of the best marquees in the nation, with close to two hundred lights. The electronically operated stage curtains were a gorgeous red plush trimmed with gold. House lighting cycled slowly from “off” to “on,” to bring patrons gently back to normal lighting levels. The screen, one of only two new kinds in the eastern part of the United States, provided a much sharper image. Signal lights notified the doorman which areas of the theater still had open seats. Kids were pleased that a shorter water fountain was provided for them.

There was also unique artwork inside the Ben Bolt. Two historical murals, each twelve feet high and thirty feet long, were painted along the inside walls of the theater by Frank Zimmerer of Los Angeles. He used his new “black light” technique with fluorescent paint highlights; when the theater lights were dimmed and special black lighting was turned on, these highlights were still visible even in the dark. There was a regional “spring” theme on the south wall and a “fall” theme on the north wall with a depiction of nearby Graham’s Mill Bridge. Zimmerer also painted a mountain scene behind the water fountains.

When the doors unlocked on August 18, 1949, at 6:45 p.m., well in advance of the first 7:30 p.m. showing, a flood of patrons inspected the premises. The first film reel shown was news provided by the Constitution-Tribune. At 7:41 p.m. there was a travel talk titled Playland of Michigan, followed by a Bugs Bunny cartoon. Theater manager John Newcomer and Chillicothe mayor Bob Staton then welcomed the crowd, followed by a dedication and a rendition of the ballad “Ben Bolt” by composer Nelson Kneass. At 8:17 p.m. the main feature began: a pre-release of It’s a Great Feeling, starring Dennis Morgan, Doris Day, and Jack Carson. A second showing of the film began at 9:50 p.m.

The theater was segregated; African American moviegoers were relegated to a separate “Negro section” with its own bathrooms and seating in the back. The theater’s managers dubiously claimed that “Negroes would rather have their own section and restroom facilities the same as most white persons enjoy theirs.” It is not clear when the Ben Bolt became integrated, but the separate seating sections were eventually eliminated.

Special arrangements were made to get movies and news reels to the Ben Bolt as fast as possible. Through the partnership of the Chillicothe Constitution-Tribune, Theatre Enterprises, Inc., and Pathe News, the news reels were sent directly from the film laboratories in New York to the Ben Bolt via air mail. These reels were to be changed twice a week, with the local paper adding news “in words” to these as necessary.

In 1974 the Ben Bolt underwent renovations to upgrade the theater that cost $45,000. On August 30 a grand reopening was held to celebrate the Ben Bolt’s twenty-fifth anniversary. The marquee welcomed Richard O’Rear, president of Commonwealth Theatres, which by then owned the theater, and Douglas Lightner, Commonwealth’s general manager; Danny Smart, the corporation’s district manager, was also present. Entertainment was provided inside and outside the theater prior to the feature movie The Great Gatsby, starring Robert Redford and Mia Farrow.

At one point in the mid-1980s, it was rumored that the Ben Bolt might expand to three screens, but this idea was placed on hold by the owners at Commonwealth. United Artists then bought the Ben Bolt in the spring of 1989. Max Thomas, manager of the Ben Bolt for about twelve years, retired that year, and Chuck Truesdell stepped in. Truesdell had worked as a projectionist at the Ben Bolt when it first opened in 1949. Roy Walden, who had worked in movie theaters for forty years, also joined the new Ben Bolt team in 1989.

In the 1990s, longtime resident and local photographer Jim Jones was granted complete access to the theater to photograph its interior and exterior features. He later published a booklet of his photographs. His project came just in time; by the late 1990s the Ben Bolt was struggling with dwindling attendance. Having a large theater with only one screen was a disadvantage in competing with other theaters. Unable to remain profitable, the Ben Bolt showed its last movie on February 11, 1999, and the building then sat empty. Maintenance had slipped for several years, and the cost to restore the theater had become prohibitive. The last owner, Scott Lindley, who had bought the Ben Bolt from Hollywood Theatres, tried to find local support to save the theater but was not successful; the Fine Arts Theatre Group of Kansas City attempted to salvage the marquee, saying it was “famous across the state.” The theater was demolished in 1999, leaving only a few tiles on the ground near the street to hint of the story of the grand building that once was there.

Kirsten Mouton is a librarian at the Livingston County Library in Chillicothe, Missouri.