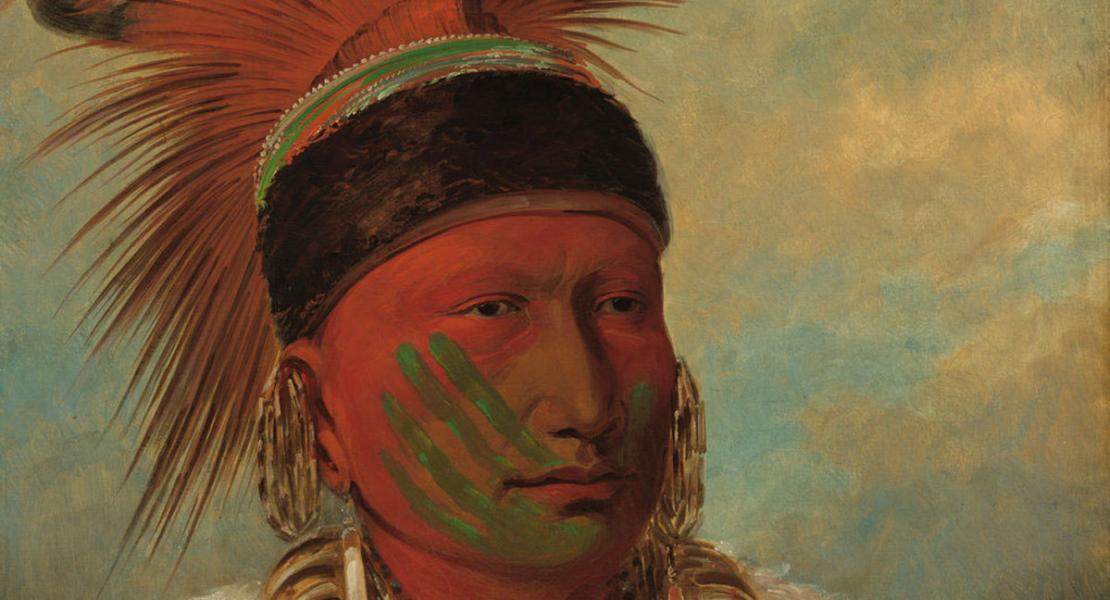 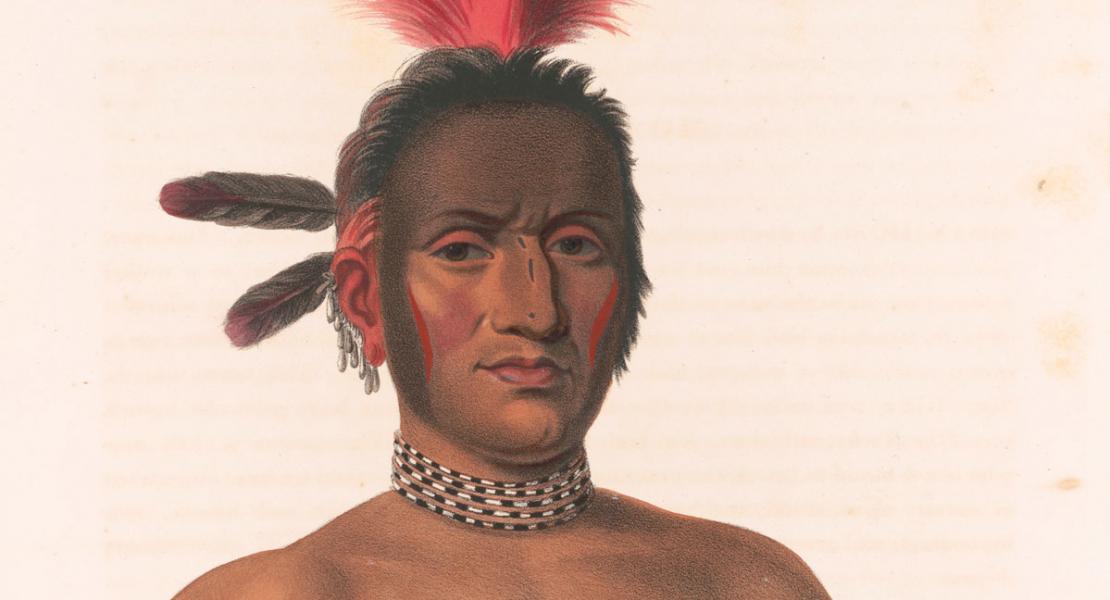 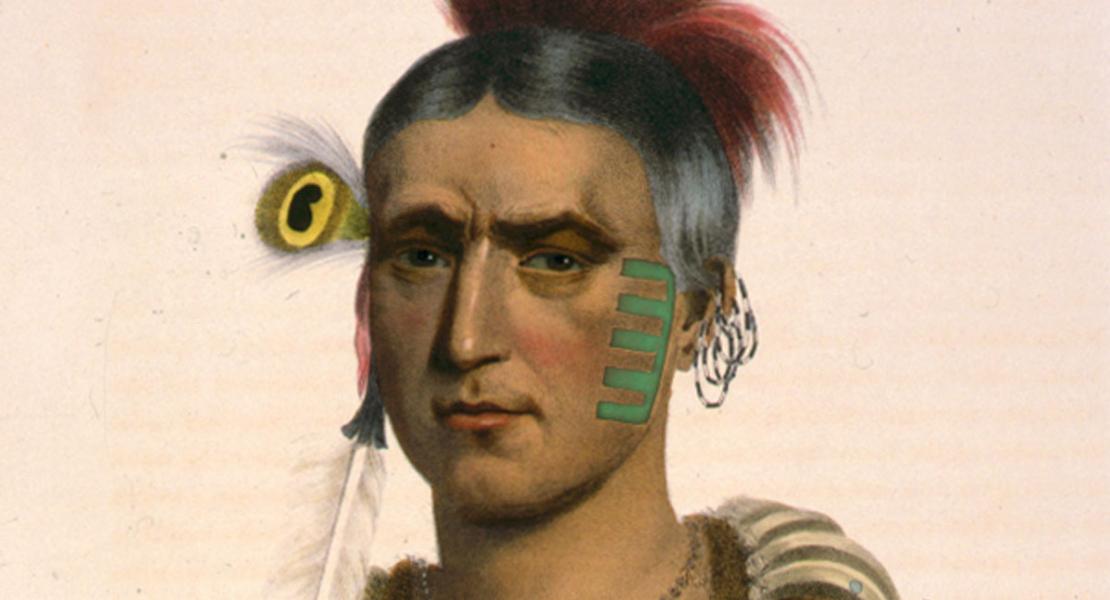 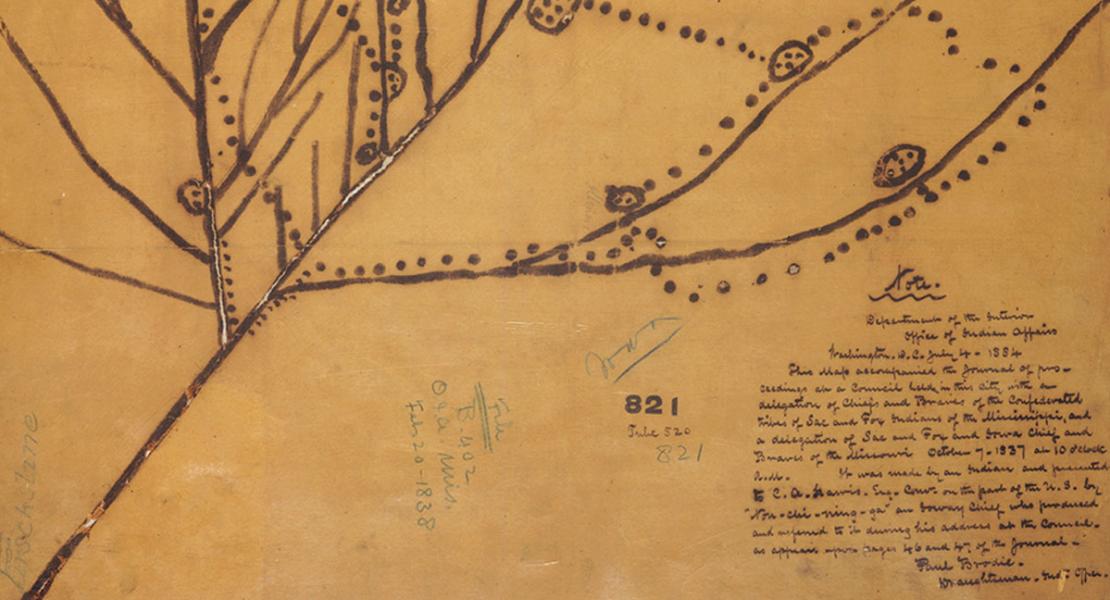 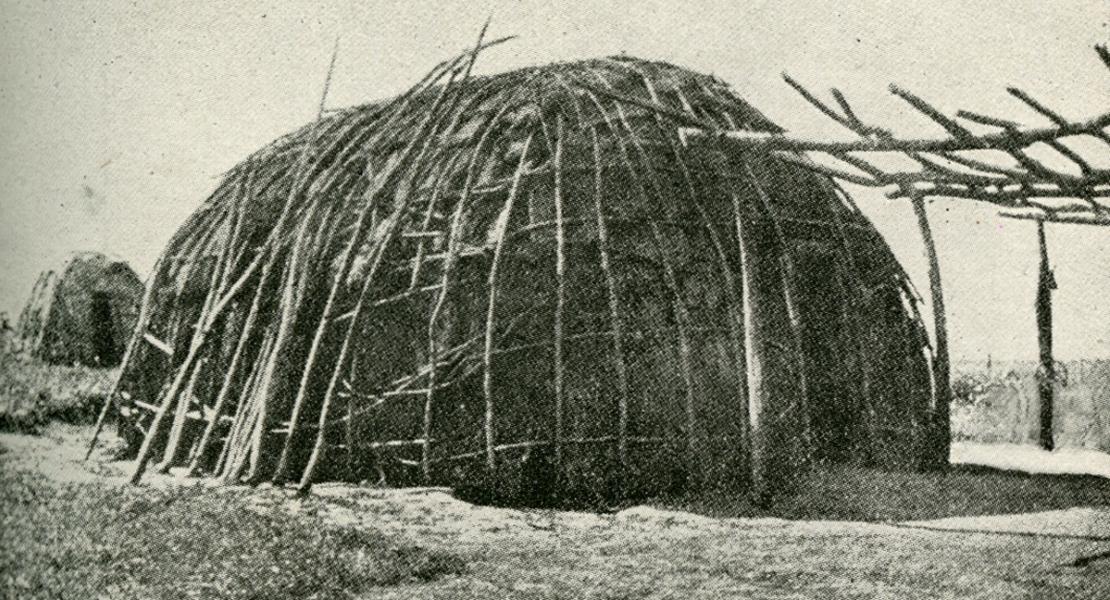 The Ioways did not live in what is now Missouri for much of the historical era. However, their Oneota ancestors lived along the Missouri River in the northern half of the state during prehistoric times. Pushed by other indigenous people and white settlers, the Ioways returned to northern Missouri at the beginning of the nineteenth century. After Missouri gained statehood in 1821, the Ioways were one of several Native nations within Missouri’s borders that signed treaties giving the United States clear ownership of the state’s land.

The Ioway or Báxoje (Bah-Kho-Je) people are the descendants of the Oneota culture that once lived across much of the upper Midwest between 1250 and 1650. Archaeologists have unearthed evidence of Oneota people along the Missouri River. Some of the best-known Oneota sites in Missouri are in St. Joseph and in Saline County near Van Meter State Park.

Over time, the Oneotas split up into smaller groups that became the Ioways, Otoes, Missourias, and Winnebagoes (or Hochunks). The Sioux are said to have given the Ioways their name. Some sources say it means “sleepy ones.” Others believe the name means “those who broke off.” The second explanation refers to the fact that the Ioways separated from their Oneota relatives in search of better hunting and farming. The Ioways call themselves Báxoje. This means “gray snow” and recalls a time when the white snow on their lodges became dark from the soot of their fires.

The Ioways and their Oneota relatives trace their earliest beginnings to a place they call Mayan Shuje, or Red Earth, near what is now Green Bay, Wisconsin. Over several centuries, they migrated south and west. The Ioways built semipermanent towns that could be home to several hundred people. They planted fields of corn, beans, and squash. The Ioways were also hunters. While their crops were ripening in the field over the summer, large groups of Ioways traveled west in search of buffalo and other wild game.

The Ioways first encountered white people in what is now southeastern Minnesota during the 1670s. These whites were French traders and missionaries. The traders were interested in selling the Ioways utensils, weapons, and cloth in return for animal hides. The French were especially fond of beaver pelts. They sent those back to Europe, where they were made into hats. The missionaries were convinced the Ioways, and other Native peoples, were uncivilized, in part because they did not worship in a way that was familiar to them. They wanted to convert Native people to Christianity.

In the decades that followed, the Ioways continued to move in a generally southern direction that brought them into Missouri Territory in the 1810s. Their enemies the Osages prevented them from moving south of the Missouri River, so the Ioways lived close to the Chariton and Grand Rivers in the northern part of the territory.

In 1821, Missouri became the twenty-fourth state in the Union. The Osages, Sacs, and Foxes had already signed treaties with the US government in which they gave up their rights to some parts of the land that made up the new state. In 1824 the Ioway leaders Great Walker (who was known later as Big Neck) and White Cloud (or Mahaska) traveled to Washington, DC, to give up their claim to all of Missouri that was located north of the Missouri River. When they returned, the government relocated the Ioways to a large area west of the state called the Platte Country. The Platte Country was set aside as a place where indigenous people could live separately from white settlers. White Cloud moved there with most of the Ioways. But Great Walker regretted he had signed the treaty and mourned the fact that he had given up the land on which many of his ancestors were buried. He led another group of Ioways north to live in the Iowa Territory near the Missouri border.

Over the next twelve years, Ioway leaders signed a number of treaties in which they gave up their rights to live and hunt in Missouri. In return for their promise to leave the state, the federal government gave the Ioways money and farm tools. They assigned missionaries, teachers, and farmers to help the Ioways learn to live like white people lived. They also assigned a government agent to protect them from swindlers and to manage their money.

In 1836 the Ioways gave up their last piece of land in Missouri when they signed the Platte Purchase Treaty. In that agreement, the Platte Country became part of Missouri and the Ioways relocated to a new reservation west of the Missouri River. White Cloud’s son Francis White Cloud was one of the Ioway leaders who signed the treaty.

Once they settled on the reservation, life changed quickly for the Ioways. Presbyterian missionaries built a boarding school where Ioway girls learned domestic skills and boys learned to farm. All children in the school learned from the Bible and studied the same subjects as white children in other schools. By the time the Civil War broke out, most of the first generation of boys who had grown up on the reservation were old enough to enlist in the army. Fifty Ioway men enlisted to fight for the Union.

Meanwhile, the government tried to take the Ioways’ reservation from them. When the Kansas and Nebraska Territories were created in 1854, the border between them ran through the Ioways’ land. To help meet white settlers’ demand for farmland, the government persuaded the Ioways to give up seven-eighths of their reservation. They then sold the land to white farmers. The Ioways succeeded in keeping the twenty-five-square-mile parcel of land that remained to them, despite efforts to make them give that up as well. They still retain much of that land today.

Beginning in 1878, small groups of Ioways moved south to Indian Territory, which would later become the state of Oklahoma. They were hoping to live a more traditional life near other Native people. By 1881 nearly half of the 222 Ioways who had survived the poverty, violence, and disease of reservation life had made the move. In 1883 the federal government created a new reservation in Indian Territory for the Ioways.

Today this branch of the tribe is known as the Iowa Tribe of Oklahoma. These “southern” Ioways now have more than 800 enrolled members. Those who remained on the original reservation are called the Iowa Tribe of Kansas and Nebraska. Their enrolled membership has risen to more than 4,000, though only a small number actually live on the reservation.

Both branches of Ioways own tribal businesses and continue to take pride in their cultural heritage. Businesses include gas stations, agricultural enterprises, and casinos. There are annual pow wows on both reservations. The Iowa Tribe of Kansas and Nebraska is developing a museum, while the Iowa Tribe of Oklahoma operates The Grey Snow Eagle House, a sanctuary for injured bald and golden eagles.