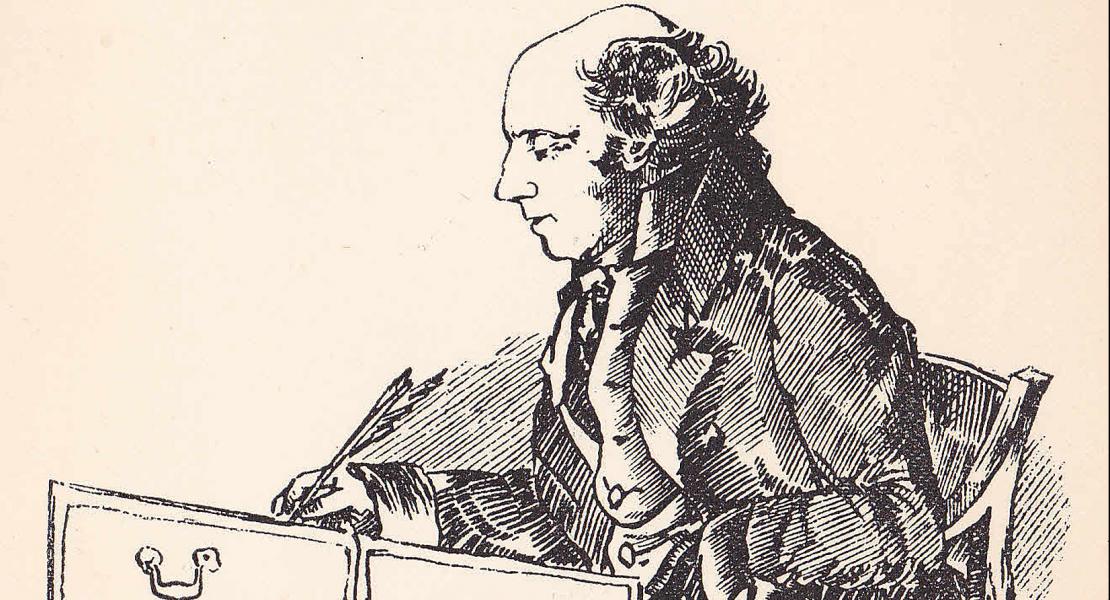 An early pioneer-farming expert and author, Morris Birkbeck exerted an enormous influence in publicizing the Illinois and Missouri Territories not only to his planned colony of English families, but also to waves of American and continental European settlers. Born in Settle, England, on January 23, 1764, Birkbeck was the son of Morris and Hannah Bradford Birkbeck, parents of some means and standing. As he grew into manhood in England, the younger Birkbeck prospered at farming and sheep raising and acquired substantial landholdings, but he became increasingly dissatisfied with the restrictive political and economic situation in the British Isles.

In 1817 Birkbeck immigrated to the United States with his large family and with his friend George Flower, also a successful landowner and farmer. In America the two men set about to create a colony for English settlers on the Illinois prairies. A former acquaintance in England, Edward Coles, who later became the second governor of Illinois, told Birkbeck of the vast expanses of open, untilled lands in the heart of America needing relatively little timber clearing. Birkbeck acquired tens of thousands of acres of virgin Illinois land, raised money, and wrote several books to lure English settlers to his American venture. Birkbeck’s publications, most notably his Notes on a Journey in America from the Coast of Virginia to the Territory of Illinois (1817) and Letters from Illinois (1818), eloquently described the new regions he intended to open up to productive farming.

In his promotional books Birkbeck touted the relative cheapness of the western lands nearer the Mississippi valley as opposed to the more expensive, “improved” areas of the central Ohio valley, already damaged by improper clearing and poor drainage. In Birkbeck’s time eastern speculators routinely offered dubious land to unwary purchasers. A strong feature of Birkbeck’s writing was his detailed accounting of the capital outlays English farmers needed to become landholders in the New World. He also extolled the ease of travel and communication via heavily used water routes linking the remote mid-American territory with New Orleans and the eastern seaboard.

Birkbeck optimistically looked upon the Illinois prairies as offering a new chapter in American agricultural development. He was one of the first writers to pull settlers away from the tradition that the good agricultural land was limited to the wooded bottoms closest to the major rivers. With a farmer’s careful perspective, he weighed the advantages and disadvantages of striking out boldly for the natural, almost parklike pastures and open prairies.

Birkbeck’s works went through numerous editions and created worldwide interest in settlement theories. Land promoters protested his assertions, and the controversy increased interest in the western territories. In fact, his books contributed to the increased settlement of the Mississippi valley in the 1820s. According to historian Solon Buck, Birkbeck called attention “not only to the English settlement itself but to Illinois and the West as a whole, and undoubtedly helped to promote emigration both from abroad and from the eastern states.”

Well informed regarding agricultural practices, Birkbeck became the first president of the earliest agricultural society in Illinois, one of the oldest in the West. He helped win acceptance for a scientific approach to farming in Illinois and the American Midwest. He drew upon his own observations on the Illinois frontier to formulate his ideas about farming. No mere speculator’s advertisements, his books documented successful early experiments in tilling the endless prairie lands of Illinois and Missouri. His ideas appealed not only to the sturdy, dedicated farmers and artisans he attracted from England, but to many others as well. Birkbeck also helped infuse Illinois with early settlers who shared his abhorrence for slavery and fought its introduction into the state. He allied himself with early Methodist and Baptist leaders in the region.

The English colony that Birkbeck established did not survive following his tragic death by drowning on June 4, 1825. But through his writings and his efforts to establish English settlements in the seemingly endless ocean of grasslands in the Illinois Country, Birkbeck facilitated the subsequent growth of an agricultural empire in the central states.

———. Notes on a Journey from the Coast of Virginia to the Territory of Illinois. London: Ridgeway, 1818.