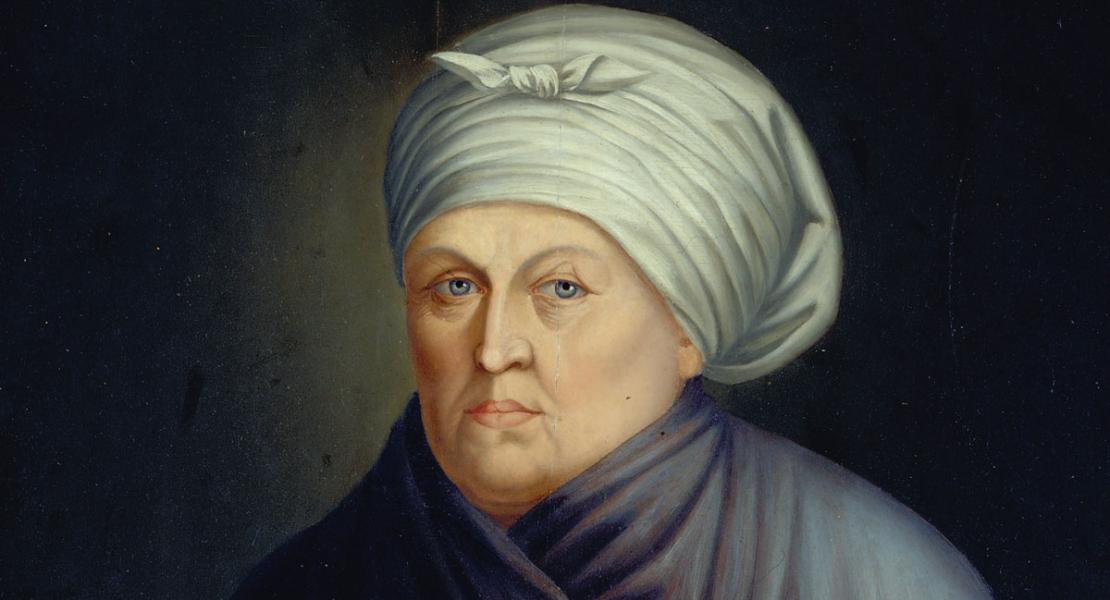 Marie Thérèse Bourgeois Chouteau was born in New Orleans on January 14, 1733, but she was to become the matriarch of a founding family of St. Louis. As the mother of Auguste Chouteau and his half-brother, (Jean) Pierre Chouteau, who helped establish St. Louis as the commercial center of a vast western market in the fur trade, and as the grandmother and great-grandmother of countless other Labbadies, Gratiots, Prattes, and Papins, Chouteau, with her informal mate, Pierre de Laclède Liguest, established a French-speaking dynasty that powerfully shaped early Missouri history. Yet her contributions to the settlement of Missouri were more than biological. She was a clever businesswoman in her own right and exerted considerable social influence in St. Louis for half a century.

Chouteau’s parents were Marie Joseph Tarare, a Spaniard, and Nicholas Bourgeois, who died when Chouteau was five years old, leaving Marie Joseph with three young children and pregnant with another. Given the meager prospects for widows in eighteenth-century New Orleans, it was fortunate that she married Nicholas Pierre Carco the following year. Despite some accounts suggesting that young Marie was placed in an Ursaline nunnery for the remainder of her childhood, the careful research of John Francis McDermott III has rendered the proposition untenable. Indeed, there is every reason to suppose that she was raised in her stepfather’s home until her arranged marriage at fifteen with a baker and tavern keeper, René Auguste Chouteau, on September 20, 1748.

The facts of the marriage between René Chouteau and Marie Bourgeois do not indicate a happy union. At least one son, Auguste, was born to the couple, probably in 1749. A second boy, René, is mentioned in New Orleans parish records as being baptized in September 1749, but as scarcely any other information is known concerning him, it may well be that Auguste and René Jr. were one and the same. In any event, Marie’s husband soon abandoned her and their son and sailed for France. The cause is unknown, but for Marie, a young mother with no connections, it meant providing for herself. In those trying times, the resourcefulness and good sense that she would continue to demonstrate in later years kept her and her boy afloat. Then, perhaps in 1755, she met Laclède.

Laclède was a polished merchant from an accomplished family in southern France. He was born in 1729 and had come to New Orleans in 1755 with his share of his father’s legacy to start a career in business. Educated and attentive, Laclède impressed Marie, and a bond was forged between the two that was regarded as a marriage by them and by others. As Roman Catholics, Laclède and Chouteau could not officially wed because of her existing marriage to the truant René. Hence, Marie had to continue as Madame Chouteau, or, as she sometimes styled herself, Widow Chouteau, even though her legal husband still lived. As a widow she could acquire property and have legal custody of her children. With Laclède, Chouteau had four children: (Jean) Pierre Chouteau, born on October 10, 1758; Marie Pelagie Chouteau, born on October 6, 1760; Marie Louise Chouteau, born on December 4, 1762; and Victoire Chouteau, born on March 3, 1764. As René Chouteau was not to return to New Orleans until 1767, it is obvious that he was not the father of these children, but his wife gave her children the Chouteau name.

Wishing to improve relations and trade with Native American tribes near the confluence of the Mississippi and Missouri Rivers as the French and Indian War was ending in 1763, authorities in New Orleans granted Gilbert Antoine Maxent exclusive trading rights in the area. Maxent in turn formed a partnership with Laclède to organize a trading post to develop the fur trade in Upper Louisiana. In August 1763 Laclède, with Chouteau’s son Auguste, began a three-month journey up the long river. After a stay at Fort Chartres, near Ste. Genevieve, Laclède moved on and selected a site for the post. In February 1764 Auguste, with a party of workers, began to clear the land and build cabins and storage facilities. St. Louis had come into existence.

September saw the arrival of Chouteau with her other children. She occupied a new building constructed as a trading post. Having left New Orleans in June, she passed some time at Fort Chartres, and then came to St. Louis to move into the new structure. For the next fifty years she would reside in the new city on the Mississippi. In that period she would see the village become a significant American town, the gateway to the West.

Chouteau moved her family again in 1768 to a new stone house that Laclède established for them. There he resided with Chouteau and the children until his death in 1778. In his will, Laclède provided that the house and other properties would pass to Auguste Chouteau and the Laclède-Chouteau children, but that Marie Chouteau would have use of the house as long as she lived. Meanwhile, the city grew as new residents arrived from French settlements on the eastern, or British, side of the river and as the developing fur trade stimulated economic growth. Spanish authorities supported commercial activity, and the Laclède-Chouteau enterprises expanded.

In her new community, Marie Chouteau presided over the operations of the busy household, acquired property (including at least several slaves), owned cattle, kept bees, and engaged in a number of business transactions. Her grown sons, Auguste and Pierre, came to control the fur trade and were dominant in St. Louis business and political affairs for decades, but it appears that they did not dominate their mother. She also helped provide handsome dowries for her three daughters, which, no doubt, contributed to advantageous marriages. After Laclède died, moreover, Chouteau first bought and then sold his farm on Grand Prairie at a handsome profit; and when her son-­in-law Joseph Papin, in pursuit of runaway Indian slaves, brought about the accidental death of her slave Baptiste, she sued him and won $600 in damages. Later, she participated in businesses operated from her house. As a businesswoman and as matriarch of the founding family, she became a powerful factor in the commercial and social life of the city.

Well before Laclède’s death, however, Chouteau’s lawful husband returned from France to New Orleans. In 1774 he initiated legal proceedings in New Orleans to compel the restitution of his wife from St. Louis to New Orleans. René Chouteau was never held in much regard in New Orleans, however, and had several brushes with the law and spent time in jail. Nevertheless, Luis de Unzaga, the governor of Louisiana from 1769 to 1777, ordered his lieutenant governor in St. Louis, Pedro Joseph Piernas, to send Marie Chouteau downriver. Piernas dragged his feet, however, unwilling to offend the family and a woman of ability and property. By the time of René Chouteau’s death in 1776, no action had been taken on the matter. Marie Chouteau remained in St. Louis but did not fail to press the authorities for possession of her legal husband’s small estate. Predictably, she succeeded and divided a small sum of money between herself and the children who bore the Chouteau name.

Chouteau is best remembered for her role as matriarch. She had hundreds of descendants connected to the preeminent commercial and political families of St. Louis. Her grandson, François Chouteau, opened a trading post in 1821 on the Missouri River far to the west of St. Louis and thus became a founder of Missouri’s second metropolis, Kansas City. Yet she was also a capable and shrewd woman who made her way in a society not designed for independent women. Indisputably, Pierre Laclède was a vital agent in her rise to wealth and prominence, but the size of her estate by the time of her death, which exceeded $2,000, proved Chouteau managed her affairs quite well in the four decades of her widowhood. When she died on August 14, 1814, St. Louis lost a hardy pioneer and a woman of substance. As late as 1825, Auguste and Pierre erected an iron cross on her tomb as a memorial and a token of respect.