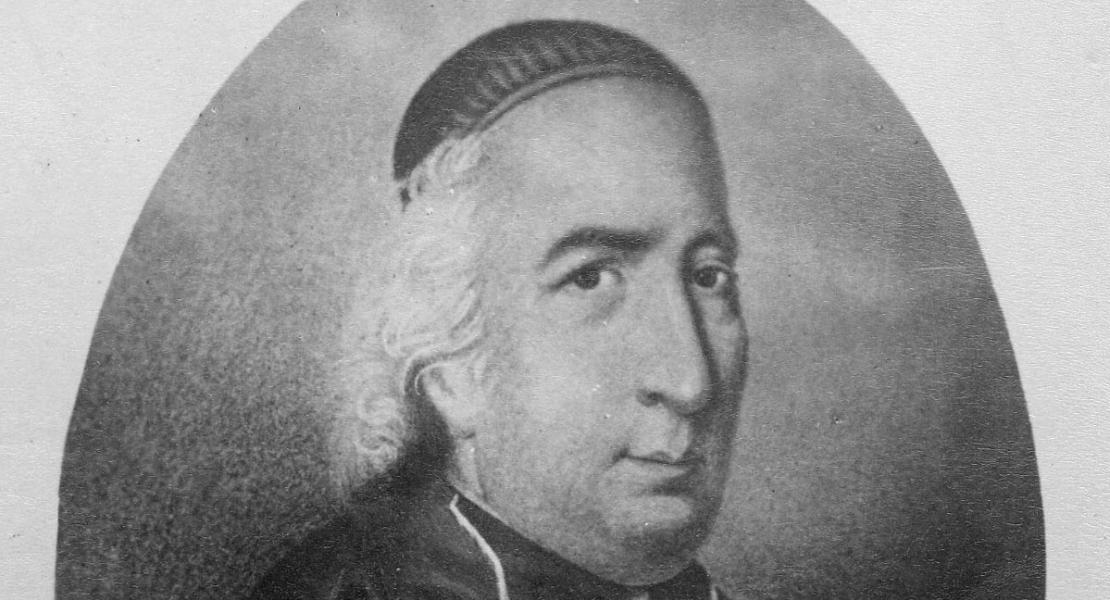 William DuBourg was a formidable force for Catholicism and for education in the early republican period of American history. A soldier of the faith in a faithless age, DuBourg believed and practiced the proverb that, if trained properly, the young will in their maturity return to the honest teachings of their parents. Before and after Missouri was separated from the Louisiana Territory, Father DuBourg touched many hearts and established several institutions that would continue to influence the territory for many years after it matured into statehood.

Late in his life, DuBourg was named bishop of Montauban and archbishop of Besançon in France, but his most productive years were in America. Born on February 16, 1766, in Santo Domingo of a mercantile family originally from the Bordeaux area, he was educated in Paris by the Sulpicians, a clerical order committed to the education of priests. The influence of this order, and especially of its longtime leader, Jacques-Andree Emery, profoundly shaped DuBourg’s life and ministry.

Throughout a career characterized by both success and failure, DuBourg’s passion was education, especially of seminarians. Few individuals could lay claim to establishing more educational centers. St. Mary’s of Baltimore, Mount St. Mary’s, Georgetown University, Saint Louis University, and St. Mary’s of the Barrens were academies either directly founded by DuBourg or considerably enhanced by his efforts. Other schools in New Orleans and in France profited as well from his dedicated labors. DuBourg also affected the development of American Catholicism by his lasting influence on such critical religious leaders as Mother Elizabeth Seton, Mother Rose Philippine Duchesne, Bishop Joseph Rosati, and Bishop Benedict Flaget.

In 1792 DuBourg fled the persecutions of the French Revolution. Journeying to Spain, he learned the Spanish language before sailing for America in 1794. Arriving in Baltimore, he experienced the good luck that often advanced his career when he was befriended by the influential Bishop John Carroll. Tutoring French and Spanish exiles allowed the immigrant to master English, and his ability and enthusiasm brought him an invitation to join the Company of Saint­-Sulpice. In his new tongue, the gifted cleric stirred faithful congregations with his brilliant preaching and inspired students with memorable lessons.

By 1796 Carroll had named DuBourg president of Georgetown College, which Carroll had founded in 1789 in Washington, DC. Soon the curriculum was revised and expanded, the student body grew, and the energetic president had even established a new women’s academy for the Poor Clares. Rising anti­French sentiment in the United States probably led to DuBourg’s departure from Georgetown in 1798, but that did not prevent his transforming Baltimore’s St. Mary’s seminary into St. Mary’s College for foreign Catholics. As in many ventures in his life, however, DuBourg’s single-minded determination to reach his goal alienated others. In trying to create the best school in America, he provoked opposition from his old colleagues at Georgetown, especially when St. Mary’s was opened to American students. Still, between 1799 and 1812, the year DuBourg left the institution, St. Mary’s flourished and in 1806 received authority from the state of Maryland to confer degrees.

In 1806 DuBourg also met Elizabeth Seton. The conjunction of these two formidable forces was to have profound consequences. Together they organized the Sisters of Charity of St. Joseph’s at Emmitsburg, Maryland. DuBourg’s characteristic impetuosity generated storms at Emmitsburg, but he did launch one of the Church’s finest enterprises, and in the years to follow Mother Seton was to become renowned for her piety and her inspiration of countless American Catholics.

The United States went to war with Great Britain in 1812, and Father DuBourg, at the age of forty­-six, went to Louisiana as apostolic administrator of New Orleans. This was an especially interesting period of DuBourg’s ministry. Initially, his mission was to serve as the overall clerical authority of the diocese. The vice of New Orleans, however, coupled with the insubordination of the popular Spanish Capuchin, Father Antonio de Sedella, the pliable pastor of New Orleans’s lukewarm Catholics, led DuBourg to request a new bishopric for Louisiana. A triumphal visit to France and Rome secured this prize for DuBourg and many clerical recruits for Louisiana, but not control in New Orleans. Despite a symbolic role in Jackson’s victory over the British in January 1815, followed by his appointment as bishop of Louisiana and the Two Floridas, DuBourg found he could not safely reside in New Orleans.

To avoid an outright schism, DuBourg left his diocesan seat in 1817 and removed to St. Louis in Upper Louisiana. Although in his fifties, DuBourg, by now a man of considerable influence in Europe, came to St. Louis brimming with energy and projects. Despite his difficulties in New Orleans, the bishop entertained no doubts that the Church could achieve great things in the trans-Mississippi territory.

Dedication aside, the overland journey from Annapolis to St. Louis brought home to DuBourg the untamed nature of the land he was entering. When his coach overturned on a rugged road, he almost suffered a fractured skull. In January 1818, however, he arrived safely in St. Louis and found a city commanding many advantages that, unlike New Orleans, extended a warm welcome to the anxious prelate. For the next five years, DuBourg would repay the inhabitants’ devotion with unstinting service.

The devotion of the St. Louis Catholic community, mostly French, but some Irish too, did not mean that there was a proclivity to support the Church financially. DuBourg spent much of his time trying to raise funds for church construction and to provide priests for the outlying parishes. He soon had a modest cathedral under way, yet his passion for education of seminarians could not be set aside. By the spring of 1818 he had already established St. Mary’s of the Barrens near Perryville. Equally important was the arrival in August of Philippine Duchesne and her Religious of the Sacred Heart. Their mission was to educate Catholic girls on the frontier, still another of the projects DuBourg had helped set in motion while in Europe. They were soon installed in St. Charles and began a long and fruitful intellectual mission.

The bishop tackled these projects with his usual vigor and disregard for financial and political problems. Naturally, he often found himself embroiled in controversy because his commitment to the faith outdistanced the means to fulfill the commitment. It did not deter him. Instead, he cultivated the influential families of the area such as the Prattes and the Chouteaus, brought priests from Europe, visited his far-flung parishes, fought off dangerous illnesses, conferred with Osage chiefs, tried to obtain federal funds for Indian education, and introduced the Jesuit order to Missouri in 1823. Among others, DuBourg imported and inspired the indefatigable Father Pierre Jean De Smet, the most celebrated Catholic missionary of the American West. These same Jesuits would eventually institute Saint Louis University.

The last year DuBourg was in St. Louis was 1823. The episcopacy of Louisiana had expanded, and he felt the need to return to New Orleans to administer his see. Although he was in St. Louis but five years and left the Missouri Church in considerable debt, his ministry, particularly his work in Catholic education, left a permanent imprint. DuBourg’s return to New Orleans lasted only until 1826; he then returned to his native France, believing his career to be at an end. Instead, he was to gain new offices and launch still more projects.

DuBourg’s homecoming in France was successful but less dramatic than his earlier achievements. He died at Besançon, the seat of his archbishopric, on December 12, 1833. Archbishop DuBourg’s contributions overshadow his faults, but he was no saint. He was often a poor judge of character, he antagonized respectable colleagues with his cavalier attitude toward finances, and he was not above self-advertisement. Always, he seems to have left unresolved crises in his wake. A more cautious man, however, though valued more would have achieved less.