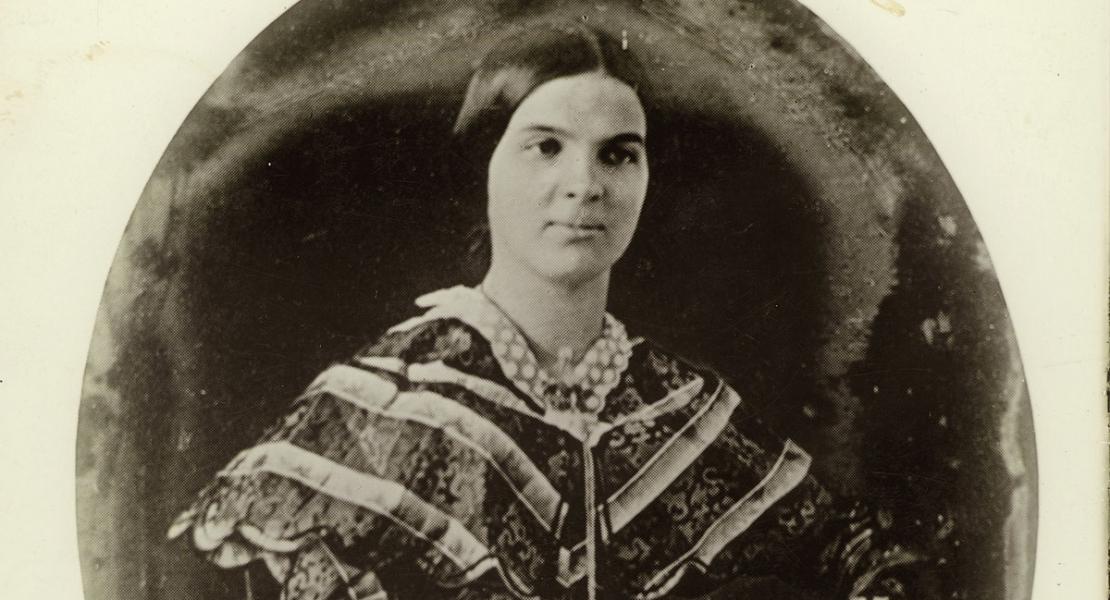 Susan Shelby Magoffin was born on July 30, 1827, at Arcasia, her father’s estate near Danville, Kentucky. She enjoyed a life of privilege and comfort as the daughter of one of Kentucky’s wealthiest and most prominent families. The Shelby family included soldiers, pioneers, and politicians, most notably Susan’s grandfather, Revolutionary War hero Isaac Shelby, the first governor of the state of Kentucky.

Perhaps Susan Shelby also longed for a life of adventure and distinction. A well-bred young woman of her time and place, she expressed her desire by accepting the most romantic and enterprising of her suitors, Santa Fe trader Samuel Magoffin, who was also the child of Kentucky pioneers, as her future husband. His father came from Ireland in the 1790s, married into a prominent Kentucky family, and prospered. His eldest brother, James Wiley Magoffin, ventured farther west and had established himself in the Santa Fe trade by 1825; Samuel joined him by 1828. The Magoffins grew wealthy from the trade and traveled widely from the United States to Santa Fe, to their stores in Chihuahua and Saltillo, and to places as far away as Mexico City. In 1828 James was appointed US consul at Saltillo and subsequently carried out a variety of missions for the US and Mexican governments. In 1830 he married into a prominent and well­-connected Chihuahua merchant family. The brothers retained their ties to Kentucky, however. In 1840 another Magoffin brother married Susan Shelby’s elder sister, and Samuel visited the Shelby household whenever he passed through on business trips to the East. Although twenty-seven years his junior, Susan fell deeply in love with the debonair merchant. On November 25, 1845, they were married.

In June 1846 the couple left James Magoffin’s house near Independence, Missouri, with a caravan of merchandise for Santa Fe and Chihuahua. Susan Magoffin is chiefly remembered today for the journal she kept on this trip. Although she modeled her journal on Josiah Gregg’s Commerce of the Prairies, it became a lively and original record of her own experiences and impressions of the land and its inhabitants. She believed she was the first “American lady” to travel the Santa Fe Trail, and she is the first whose record of the experience is known. She made the trip at a particularly critical time: the United States had declared war on Mexico in May 1846.

Enjoying the adventure of her new life, Magoffin at first seemed oblivious to the international situation, but events soon overtook her. She and her husband followed General Stephen Watts Kearny’s army to Santa Fe, and later followed Colonel Alexander W. Doniphan’s force to Chihuahua. Her journal vividly describes wartime conditions, the army officers who paid her court, and the Mexican people she encountered. Indirectly, she offers much evidence of the American merchants’ role in the war and the American acquisition of New Mexico.

Samuel and Susan Magoffin returned to Kentucky in 1848, then in 1852 moved to Barrett’s Station, near Kirkwood, Missouri. Samuel bought a large estate there and proceeded to enlarge his fortune through land speculation.

The experience in Mexico had ruined Susan Magoffin’s health. She suffered a miscarriage on the way to Santa Fe, and on the return trip endured a nearly fatal bout of yellow fever; the premature birth of another child who died a few days later weakened her further. A daughter, Jane, was born in Kentucky in 1851, and another, Susan, in Missouri in 1855. This last birth overtaxed the mother’s strength, and she died on October 26, 1855. She was buried in Bellefontaine Cemetery in St. Louis.