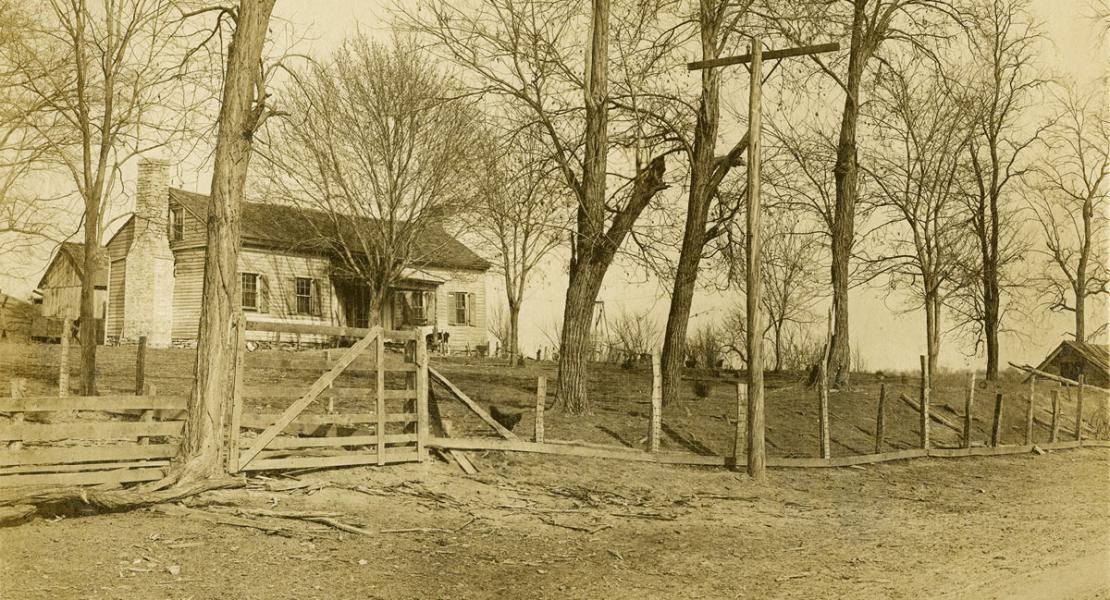 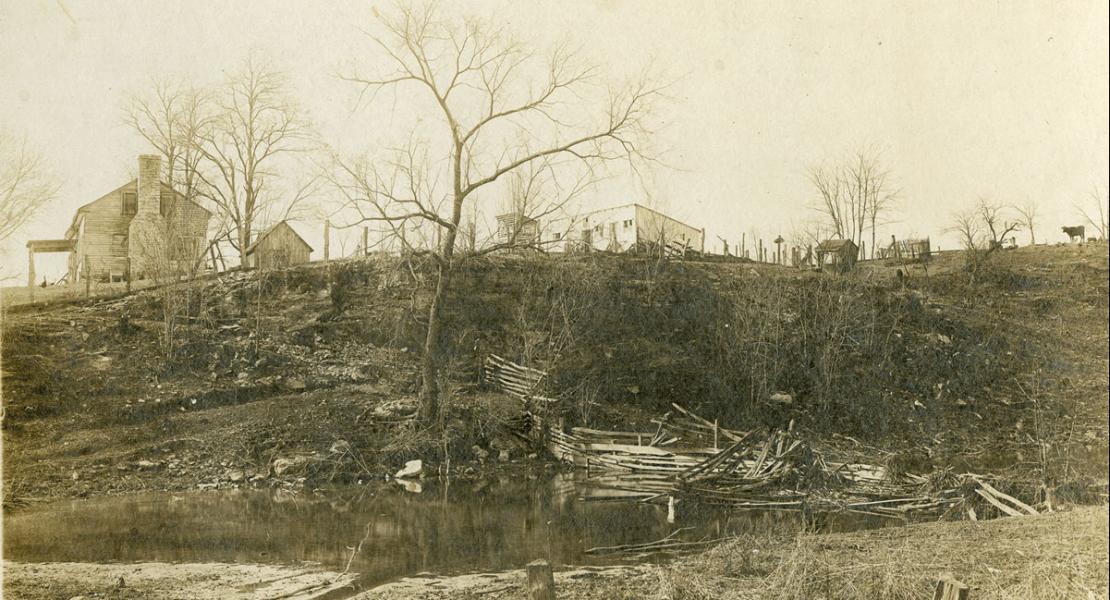 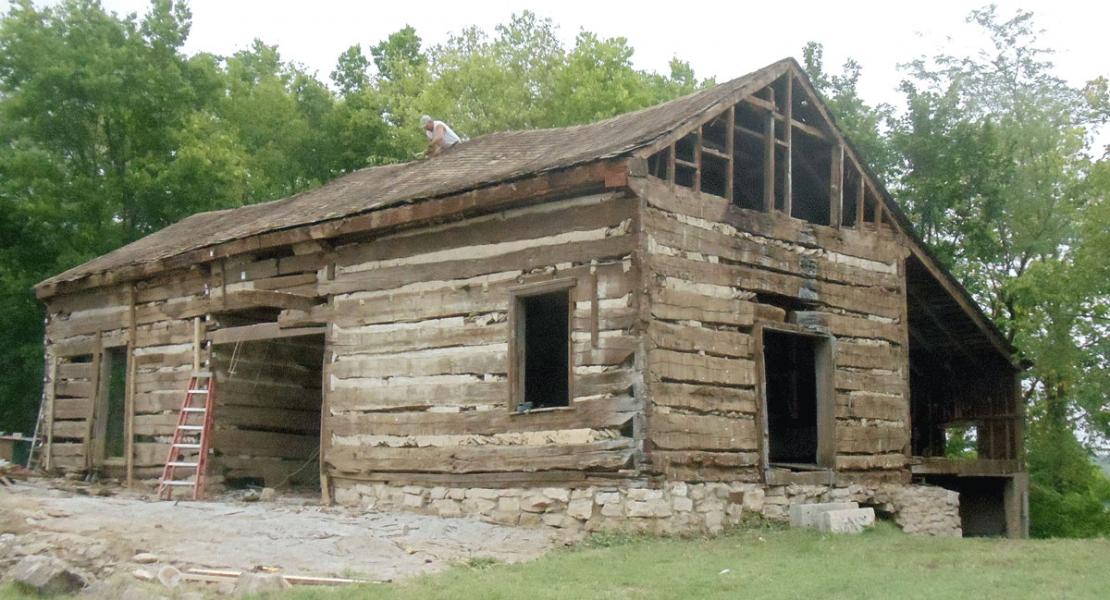 The Gentry–Threlkeld–Van Horn Tavern, usually referred to as the Van Horn Tavern, was the last known log tavern building standing on the Boone’s Lick Road between St. Charles and Old Franklin. Until 2013 it stood near its original location in Boone County between Columbia and Rocheport. In 2013 the building was disassembled, moved from the property of Patrick and Rita Dougherty, and relocated to Warren County in the hope that it could be preserved.

Using current landmarks, the original site is immediately south of Interstate 70 and about one-half mile east of the turnoff for Midway, Missouri, the first exit west of Columbia. Naturally, the property was on Van Horn Tavern Road. The site included the tavern, a root cellar, a hand-dug well, and other remnants of a very early 1830s homestead. The original tract, eighty acres described as the “E ½ of the NE ¼” of Section 7, Township 48N, Range 13W, was patented in 1827 by Benjamin Hatton.

In antebellum Missouri and its surrounding region, the term “tavern” referred to an inn—a stopping place for travelers. It was not a drinking establishment. A tavern was typically a large home where the family welcomed travelers, allowing them to stay inside or just to pull up nearby and stay with their own wagons. Guests could get a meal and water and also feed their horses and livestock. If they slept inside, they typically stayed in the upstairs part of the building. The room under the guest sleeping quarters was the dining room. Many taverns, including the Van Horn, also served as stage stops.

Hatton and his wife, Darrens, and William R. Anderson and his wife, Delila, sold the property to David Gentry on January 6, 1829, for $550. Gentry, the brother of Columbia founder Richard Gentry, kept the property for less than eighteen months, but during that time he built what would become known as the Van Horn Tavern. A tree-ring study released in 2006 by Richard Guyette and Michael Stambaugh of the University of Missouri determined that the logs for the tavern building were probably harvested between October 1829 and April 1830, thus indicating that the tavern was built while David Gentry owned the property. The construction work would have been done by Gentry’s slaves. It is not known whether the Gentry family used the building as an inn, but contemporary accounts prove that it was already a stopping point on the road not long after John Threlkeld purchased the property for $1,100 in June 1830.

The building was large for a log dwelling. It was a classic double-pen, story-and-a-half structure with a ten-foot dogtrot between the two pens. The total footprint of the building was 21 x 48 feet, with each pen measuring 21 x 19 feet. Photos from about 1914 show that by then it had been covered with clapboards, as was normally done to protect and update early log dwellings.

The 1830 federal census, probably enumerated in mid-year, included the David Gentry family immediately before that of the John Thralekill [Threlkeld] family. Both were clearly living at or near the tavern building. The David Gentry household consisted of nine family members plus six slaves. A household of that size would certainly require a large structure. The Thralekill listing included five family members and six slaves. The two men may have had some kind of business arrangement involving the construction of the building.

Historical accounts state that the noted author Washington Irving stayed at the Van Horn Tavern in 1832. The Columbia Missouri Intelligencer on September 29 of that year included an article about Irving’s arrival in Columbia ten days earlier. It said he “remained here until the next day, when he resumed his journey for the Osage country.” Many years later, the Columbia Evening Missourian of August 24, 1921, provided a lengthier account of this visit that was based on the recollections of descendants of Ishmael Van Horn, who became the tavern’s owner in 1841. The popular Irving had just returned from living abroad in Europe, and his western adventure was followed by his 1834 book A Tour of the Prairies. At the time of Irving’s visit the tavern would have been properly called Threlkeld’s Tavern.

The tavern became an important stage stop on the Boone’s Lick Road, the main road at this time into central Missouri and points west. It occupied a strategic location at a branch in the road west of Columbia—one branch continuing west to Rocheport and the other heading northwest to Fayette. The July 18, 1835, Columbia Missouri Intelligencer mentioned “Thrailkeld’s” in three different legs of the stage schedule.

John Threlkeld died intestate in May 1835. His heirs sought to have the property divided, but they could not agree on exactly how. In August 1839 commissioners who had been ordered to partition the land reported back to the court: “We have been all over the lands and viewed them, and find that there is about 40 acres of cleared land now in cultivation on which there is a large double hewn log dwelling, stables, and other out houses situate in the South West corner of the lands . . . we do not believe that any partition can be made in which justice could be done to the owners. We therefore report that said lands are so situated that partition thereof cannot be made without great prejudice to the owners thereof.”

Ownership of the land passed through Moss Prewitt and on to Ishmael Van Horn on January 1, 1841. Van Horn and his wife and family had moved to Boone County in 1838 or 1839. No primary tavern records are known to exist from the years of Van Horn’s ownership, but some stories from this time period have been preserved in other sources. In an article for the Missouri Historical Review, Walter B. Stevens noted, “There were taverns in communities so strong Whig that [Senator Thomas Hart] Benton would not put up at them. It is a tradition well preserved in Columbia that Benton rode through the university town and went out three miles to a small tavern in the country to pass the night, rather than accept better accommodations where the opposition was so strong.” Benton supposedly went to the Van Horn Tavern. His visits to the tavern were likely in the 1840s when the Whigs were powerful in the Little Dixie region of the state and Columbia inns may have seemed to him to be at their most unwelcoming.

During the Civil War, the Van Horn Tavern saw its share of larceny and mayhem. In April 1862 the Columbia Missouri Statesman reported: “Jayhawking.—On Sunday night last some persons unknown went to the barn of Mr. ISHMAEL VANHORN of this county, one of our most reliable Union men, and took therefrom three fine horses one of which belonged to his son-in-law, Mr. Willis G. Evans. No trace of the horses or thieves has since been discovered.” And in July 1864 the same newspaper reported: “Guerilla Robberies—A few days ago a party of guerrillas went to the residence of Mr. Ishmael Vanhorn, and after taking prisoner all the male persons on the premises, ransacked his house, opening trunks and drawers, taking an amount of clothing and other articles. Another party returned on Wednesday and took three horses but returned them. On Wednesday they took two horses from a pasture within sight of town. The horses were the property of Mrs. Elizabeth Selby, one valued at $400.”

Little about the tavern is recorded in the years after Van Horn’s proprietorship ended with his death on December 4, 1865. Local historian Francis Pike, writing in the Columbia Daily Tribune, said that after Van Horn, “other owners managed the tavern into the 1880s. From then until 1914, the building was used as a residence although travelers in covered wagons continued to stop at the house to stay overnight.”

In 1913 the Daughters of the American Revolution marked the historic Boone’s Lick Road site with a red granite marker that incorrectly claims the Van Horn Tavern was constructed in 1820. Around 1914 the structure was moved about a hundred yards north from its original location near the present-day residence of the Doughertys by then-owner Lloyd Simpson. To accomplish the move, the long, continuous logs near the top of both sides (“pens”) were sawed in two, with the two halves moved and then placed back together as they originally were. The tavern building was then relegated to serving as the central part of a large barn on the Simpson property. Two side lean-to sheds were added, and the whole structure was roofed with corrugated metal and sided with lumber. This fortunate occurrence meant that the building was sheltered from the worst elements for many decades to come.

A number of newspaper articles in the 1970s told of Patrick and Rita Dougherty’s efforts to publicize the plight of the tavern and raise interest in its restoration. The structure, while generally well preserved, was nevertheless in increasing jeopardy. The Boone County Historical Society’s board of directors designated the location as a county historic site in 2008. After local efforts were unsuccessful in saving the building, the Doughertys allowed the structure to be dismantled and moved for reassembly in a collection of historic buildings in Boone Monument Village at Marthasville, Missouri. The components remain in storage there.

This article is adapted from David Sapp’s earlier article “Whatever Happened to the Van Horn Tavern?” published online at https://booneslickroad.org/upload/library/files/1532045698_TavernHistoryJuly2018.pdf. It appears here by permission of the author.

David Sapp is a local historian who specializes in his native Boone County and the central Missouri region.