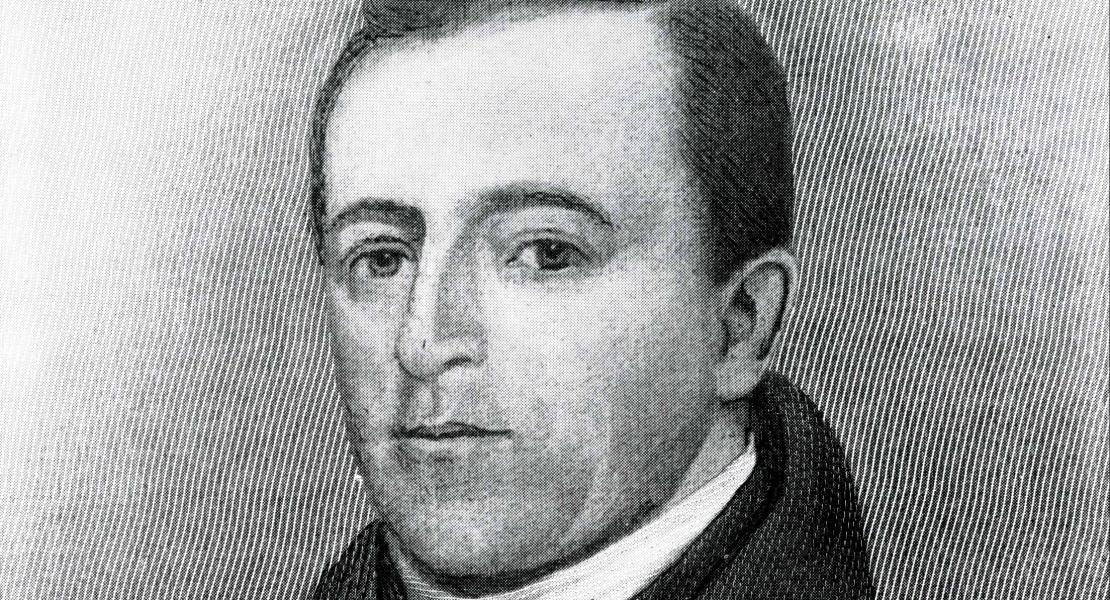 David Barton was born near Greenville, North Carolina, now in eastern Tennessee, on December 14, 1783. He was the fifth of twelve children born to Isaac and Keziah Barton. A frontier Baptist minister, Isaac Barton probably struggled to provide for his large family. David, however, apparently received a good education. According to traditional accounts, he attended Greenville College, studied law with a distinguished Tennessee judge and attorney, and was admitted to the Tennessee bar.

The best evidence indicates that the young lawyer moved to Missouri in 1809 and was well received in St. Louis. Barton made early connections with some of the leading lawyers and political figures of the Missouri Territory, and within a short time had established a successful law practice and launched his political career.

In March 1812 Barton joined a company of mounted rangers organized by Nathan Boone. He was appointed ensign but resigned his commission after three months. The following year William Clark, governor of the Missouri Territory, appointed Barton as attorney general. During his term Barton joined a company of volunteer Missouri rangers under the command of General Henry Dodge that marched into the Boonslick country in September 1814 to deal with Native unrest. Barton saw no combat, but his two stints in the rangers helped establish his popularity throughout the Missouri Territory.

In 1815 Governor Clark appointed Barton as the first circuit judge of the Northern District of Missouri, then consisting of St. Charles and St. Louis Counties (Howard County was added to the district in 1816). In this office, Barton gained new friends and clients before resigning the judgeship to attend to his growing law practice. In 1818 he returned to politics, winning a seat in the territorial House of Representatives, which chose him as its Speaker. Barton was well on his way to a promising political career.

As Missouri advanced toward statehood, Barton was elected as a member of the constitutional convention, whose delegates elected him as the presiding officer. Barton apparently played such a leading role in writing Missouri’s first constitution that it has been called “the Barton Constitution.” While scant records of the convention’s proceedings make it difficult to trace his precise role, Barton clearly influenced the shape of the document, especially the judicial branch and its other conservative features.

Credited by some historians as having been the most popular man in Missouri by 1820, Barton was elected as the state’s first US senator by the Missouri General Assembly. Although chosen by a large majority, Barton did not receive the unanimous vote traditionally accorded him in Missouri political lore. His statewide popularity and the impressive vote for senator stemmed from his ranger service, his territorial political career, and his nonaffiliation with either the St. Louis Junto or the anti-Junto factions that were struggling for control of the state. In a much closer contest, the General Assembly elected Thomas Hart Benton, then connected with the St. Louis Junto, as Missouri’s second US senator. Barton drew by lot the four-year term assigned to one of the new state’s first US senators.

Barton probably reached the peak of his political popularity and power in 1820. He won reelection to the Senate in 1824, in spite of opposition from Benton and others. Although he continued for several years to be an influential political leader, Barton increasingly represented a conservative minority that opposed the rising tide of Jacksonian Democracy led in Missouri by Benton.

Barton’s appearance, habits, and general demeanor are not fully clear. Some historians have questioned the authentication of the portrait most often used in Missouri history books. In general, his contemporaries described Barton as small, thin, habitually careless, even untidy in dress, and physically unimpressive. Yet friends called him a cultured gentleman, one whose oratorical eloquence and skill surprised first-time listeners. He could speak with ease, revealing a knowledge of his subject and making his points with decisive logic. He has also been described as a forceful and fighting speaker. With a hard-hitting sarcasm, often bitter and vindictive, Barton attacked his opponents and held his own in Missouri’s rough, personal, and frontier-style politics. His rough-and-ready behavior extended to hard drinking. Barton may not have been as intemperate as his enemies sometimes charged, but his frequent bouts with the bottle spawned rumors, and the unfortunate habit became a highly detrimental factor in his final years.

In the national election of 1824, Barton campaigned, as did Benton, for Henry Clay, the clear presidential favorite in Missouri. But when the absence of a majority vote sent the presidential election to the House of Representatives as a contest between John Quincy Adams and Andrew Jackson, the two Missouri senators parted company and launched their roles as leaders of the two diverging political factions in Missouri. In time, the Barton faction would relate to the National Republican Party of Clay and Adams, while the Benton faction generally became the Democratic Party of Jackson.

In the election of a president, Barton advised John Scott, Missouri’s representative, to vote for Adams. While recognizing the accountability of a representative to his constituents, Barton argued that, in this case, the representative’s vote was cast under the authority of the Union and not the state. Thus, the representative should act in the interest of the nation and vote for the best man to be president, and Barton believed that man was Adams. Barton’s reasoning had merit, but more Missourians agreed with Benton’s passionate oratory that because the people of Missouri wanted Jackson, Scott had no choice but to honor their wishes and vote accordingly.

Only a short time earlier, Barton had opposed Benton’s proposals for a constitutional amendment to abolish the electoral college and provide for a more direct election of the president, and for a law to graduate downward the price of public land. In this negative stance, Barton stood opposed to the growing strength of the Jacksonian movement in Missouri with its popular advocacy of a greater political democracy and greater equality of economic opportunity.

As Barton emerged as the Missouri leader for the Adams-Clay position, he urged a more positive view of national government, strongly disapproving of those who charged it with trying to destroy states’ rights. In asserting the benefits of national power, he supported Clay’s proposed American System of protective tariffs for American producers and national internal improvements as beneficial to all Americans.

As a political conservative, Barton feared the excesses of popular democracy, and he believed those excesses less likely to affect the national than the state governments. On the one hand, he always held the judicial branch of government in high esteem, and he saw the US Supreme Court as the check upon abuse of power by the people, the executive, and the Congress. On the other hand, he favored a liberal interpretation of the Constitution to accomplish the programs and goals of Clay’s American System.

Benton’s reelection in 1826, despite Barton’s opposition, revealed further the divergence of the two Missouri leaders and their respective factions. In 1828 a correspondent for the New York Commercial Advertiser wrote that Barton and Benton were uniformly opposed on every subject. Jackson’s sweeping victories nationally and in Missouri in 1828 elevated the Jackson party, along with Benton, to a clear political dominance in the state. At the same time, that election marked a rapid decline in Barton’s political fortunes.

Perhaps the final straw in Barton’s political downfall was his vote against Benton’s land-graduation bill in 1829—the only western senator to vote against it in that session. He voted against graduation even as he recognized that the great majority of Missourians favored it. He distrusted the direct mass democracy he saw stemming from Benton’s proposal to abolish the electoral college, and he saw graduation as an example of politicians inflaming passions and hopes of the masses founded on unsound programs to gain votes and political power. He set forth a well-reasoned explanation for his stance: to lower the price of public land, he argued, would not help the poor who had no money, but would result in vast sales of the public lands to speculators. Rather, he proposed reducing the minimum price of public land from $1.25 to $1.00 per acre, and to make direct grants from those lands not sold after five years to the poor who would settle on them. But Missourians would not listen to Barton’s land proposal. Finally, in 1830, recognizing the then-popular “right of instruction,” Barton complied with instructions from the Missouri General Assembly and voted for a graduation bill. The bill, however, failed passage in Congress.

The only major office at stake in the Missouri elections of 1830 was Barton’s seat in the US Senate. Given his representation of a Missouri minority, widespread reports of his intemperance, and the Jackson-Benton party’s determination to bring him down, Barton accepted the advice of friends and did not seek reelection.

Barton did not, however, withdraw from the political arena. Making his home in St. Louis, he made an unsuccessful run for election to the US House of Representatives in 1831. In 1834, however, he won election to the Missouri Senate, although he took little part in its proceedings. His associates described him as melancholy and moody, and he resigned his post before the close of the legislative session.

Barton moved to Boonville in December 1836. Although he engaged in law practice there, his physical and mental health made it difficult for him to attract new business or handle more than a few cases; in fact, he was unable to finish some cases. His increasingly strange and irrational, sometimes violent, behavior caused his friends to worry about his own safety as well as that of others. Just how much his excessive use of alcohol contributed to his deteriorating mental and physical health is not clear. His condition so worsened that in August 1837 the county court ordered the sheriff to summon a jury to investigate Barton’s mental faculties. The jurors pronounced him insane and appointed his brother Isaac as his guardian. Barton died in Boonville on September 28, 1837.

Barton’s unfortunate demise was a tragic end for the career of a Missourian who, with great ability, distinction, and integrity, had served his state in several important public posts. If he did not always represent a majority position on public issues, he based his actions on sound principles backed by equally sound and valid reasoning.