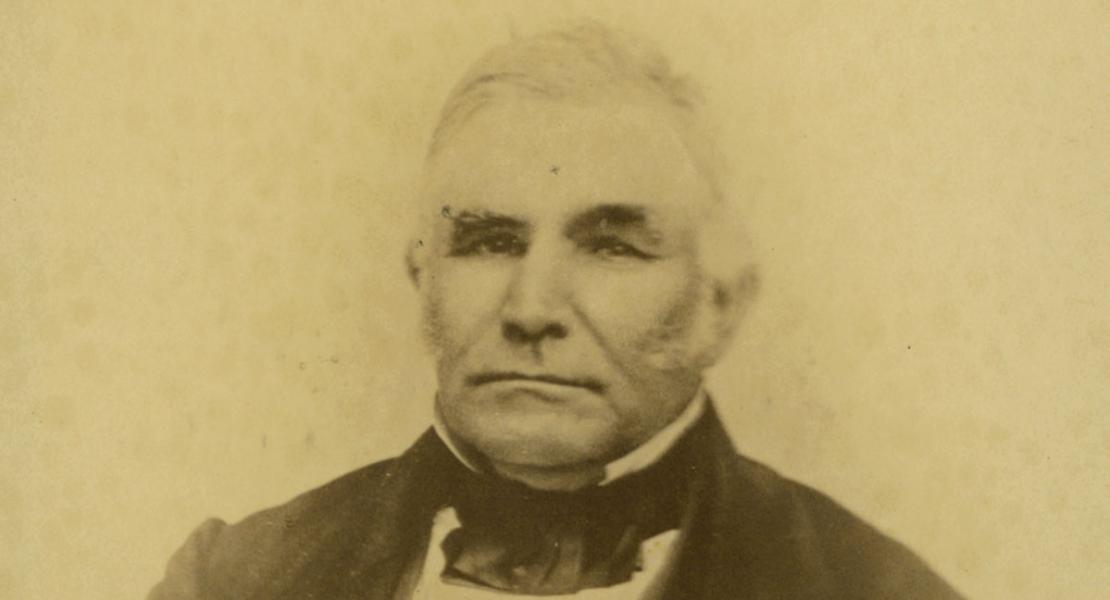 Born in Lexington, Kentucky, on December 14, 1792, Lilburn W. Boggs became one of the most important and controversial politicians in Missouri in the antebellum era. Serving as the state’s sixth governor from 1836 to 1840, Boggs’s policies on two issues—Mormonism and the construction of a new capitol building—aroused controversy. His administration was also plagued by the Panic of 1837, one of the most serious national economic downturns in the first half of the nineteenth century, which effectively blocked his plans to expend state funds for internal improvements to railroads and waterways. He was successful, however, in chartering the Bank of the State of Missouri to help control the state’s finances and in passing the Geyer Act, which laid the foundations of the state public school system and the creation of the University of Missouri.

After serving in the military during the War of 1812, Boggs became a bookkeeper in the Insurance Bank of Kentucky. In 1816, however, like so many other Kentuckians, he moved to the Missouri Territory to seek his fortune and make his place in the young nation. He opened a store in St. Louis in 1816, but within a year had become cashier of the newly created Bank of Missouri. In August 1817 he married Julia Anne Bent, daughter of Silas Bent, a prominent jurist and political figure in the territory. This relationship helped Boggs gain entrée to the upper echelons of state leaders.

A year after his marriage, Boggs moved westward up the Missouri River to the booming community of Franklin, then a major outfitting point for the Rocky Mountain fur trade, and opened a general store. In 1820 his business success was ensured when he was appointed by the US government as the assistant factor at Fort Osage in the western part of the state, providing government trade goods to the Indians. His wife’s health necessitated that he return to St. Louis in the fall of 1820, however, and she died within a short time due to medical complications following the birth of their second son. Boggs then returned to Fort Osage and remained in business there until the government abandoned the factory system associated with Indian affairs in 1822.

Boggs opened a regular shop in Sibley, near Fort Osage, in 1822, and operated a business in which he frequently traveled to other communities with his wares. Because of this type of trade, Boggs became one of the best-known men in western Missouri, a powerful advantage in his later political career. While involved in this trade, he also met and married, in July 1823, Panthea Boone, a granddaughter of Daniel Boone. Three years later Boggs moved his business to the newest Missouri boomtown, Independence, which soon supplanted virtually all other centers for outfitting traders going to the West.

Not long after moving to Independence, Boggs ran for the state senate from the newly created Thirteenth District. Probably because of his wide acquaintance in the region, he was unopposed in the contest. In 1828 he ran for a second term, again winning handily. While in the legislature, Boggs became closely identified with the Jacksonian Democrats then in control of the state. He was nearly always teamed with the senior US senator from Missouri, Thomas Hart Benton, and the Democrats who ran the state.

Because of his loyalty to party, as well as his power base in the western part of the state, Boggs was chosen by the Democratic Party to run for lieutenant governor with the gubernatorial candidate Daniel Dunklin in 1832. Both were elected with comfortable majorities. As lieutenant governor, Boggs had to be in Jefferson City only while the legislature was in session. Consequently, while in office he spent much time in Independence attending to his business and dealing with local political issues.

This began to change in January 1835 when Boggs and several other senior Democratic Party officials met in convention to nominate a slate of candidates for office. Boggs received the nod for governor and ran against the well-known St. Louis businessman William Henry Ashley, the Whig Party’s candidate. The Democratic machine got behind Boggs’s candidacy, and the party’s entire ticket was elected. In the summer of 1836 Daniel Dunklin resigned the last few months of his gubernatorial term, and Boggs succeeded him.

The highest priority Boggs brought to the governor’s office was the chartering of the Bank of the State of Missouri. He sponsored a law that incorporated a middle position between the Whig demand for a powerful state-owned bank and the Democratic emphasis on private banks without the power to issue currency. His proposal called for a bank with a rigidly circumscribed capital, one-half to be subscribed by the state and the remainder from private stockholders. The bank could issue bills of large denominations to meet the requirements of St. Louis business firms, with specie being reserved for most everyday transactions. With the mixture of public and private sectors in the bank, Boggs hoped to stabilize the state’s economy, create monies for state projects, and satisfy a multitude of philosophical positions relative to banking in the state.

At the same time Boggs pressed for the passage of a bill to build a new capitol building in Jefferson City. He suggested selling several state-owned lots in the city to raise the $75,000 he estimated as the cost of a new building. He also advocated the issuance of state bonds to raise funds for the project. In 1838 the new capitol was started, but it was still incomplete in 1840 when the legislature began an investigation of possible malfeasance in the raising and disbursing of funds. Boggs was personally tarred by the investigators, mostly regarding the manner in which some of the money had been raised. Although he escaped formal censure, it affected his ability to accomplish other goals.

The most public scandal of Boggs’s administration was the handling of the so-called Mormon War in western Missouri in the fall of 1838. Boggs, who personally disliked the Mormons as a clannish group of religious zealots that caused problems wherever they went, overreacted to difficulties in Gallatin, Missouri, in August 1838 when a riot broke out at the precinct during an election. After a Mormon was prohibited from voting, probably unjustly, a posse led by Joseph Smith Jr., the Mormon prophet, responded by riding from their stronghold at Far West (the seat of government in Mormon-controlled Caldwell County) to Gallatin and confronting a local justice of the peace, Adam Black. Black and other non-Mormons sent alarming reports to Boggs and petitioned him for troops to put down a rebellion of the Mormons against state authority. As a result Boggs ordered the commanders of seven divisions of state militia to stand ready to march and deployed a small peacekeeping force to western Missouri.

Sustained trouble developed on October 25, 1838, when a Mormon military unit under David W. Patten, an apostle in the church, engaged a detachment of militia under Captain Samuel Bogart at what has been christened the Battle of the Crooked River. Several casualties resulted, with three Mormons killed (one of whom was Patten) and one fatality in Bogart’s ranks. The engagement of state troops, regardless of the circumstances surrounding it, and rumors that the Mormons were in open rebellion against the state were sufficient to prompt Boggs to call out reinforcements to restore order. He placed General John B. Clark of Howard County in command and gave him explicit instructions on October 28, 1838, for dealing with the Mormons. His instructions were an overreaction of the worst magnitude. He said, “The Mormons must be treated as enemies, and must be exterminated or driven from the State if necessary for the public peace—their outrages are beyond all description.” This declaration led directly to the state militia’s attack on several families of Mormons at Haun’s Mill on October 30, killing eighteen and wounding another fifteen.

At the same time, in late October 1838, Boggs’s state troops surrounded Far West and demanded the surrender of Joseph Smith and his key lieutenants. They eventually surrendered on October 31. The militia commander had the Mormon leaders court-martialed and ordered their execution, but Alexander W. Doniphan of Clay County, apparently the only lawyer present, protested the decision and promised legal action against the militia commanders if they carried out the sentence. Instead, Smith and his associates were taken to Liberty and kept in jail over the winter of 1838–1839 to await a civil trial. Eventually, while being transported from Daviess to Boone County, the Mormons escaped and left the state. It was widely rumored that they were allowed to escape by civil authorities who viewed a trial as meaningless at that point. Smith went to Illinois, where most of his followers had migrated following the October war.

At the end of his gubernatorial term in 1840, Boggs returned to Independence and worked in his business. He did not emerge again in the public light until 1842 when he was shot and nearly killed by an unknown assassin while reading in his Independence home. Suspicion of the attack was laid at the feet of the Mormons, and one of Smith’s followers was arrested, but no one was ever convicted of the crime. Perhaps because of the publicity associated with his attempted assassination, Boggs was readily elected to the state senate in the fall of 1842, serving four years before retiring from public office.

In 1846 Boggs’s business fell apart, and he lost his home in an economic depression. He left with his family by wagon on May 10, 1846, for California, where he hoped to start anew. He reached Sutter’s Fort in November, and within a short time had been appointed alcalde (chief civil authority) of California north of Sacramento. At the same time, Boggs opened a general store and during the gold rush made a fortune outfitting miners. In 1852 he purchased a farm in Napa Valley and retired from business. He lived there in relative seclusion until his death on March 4, 1860.