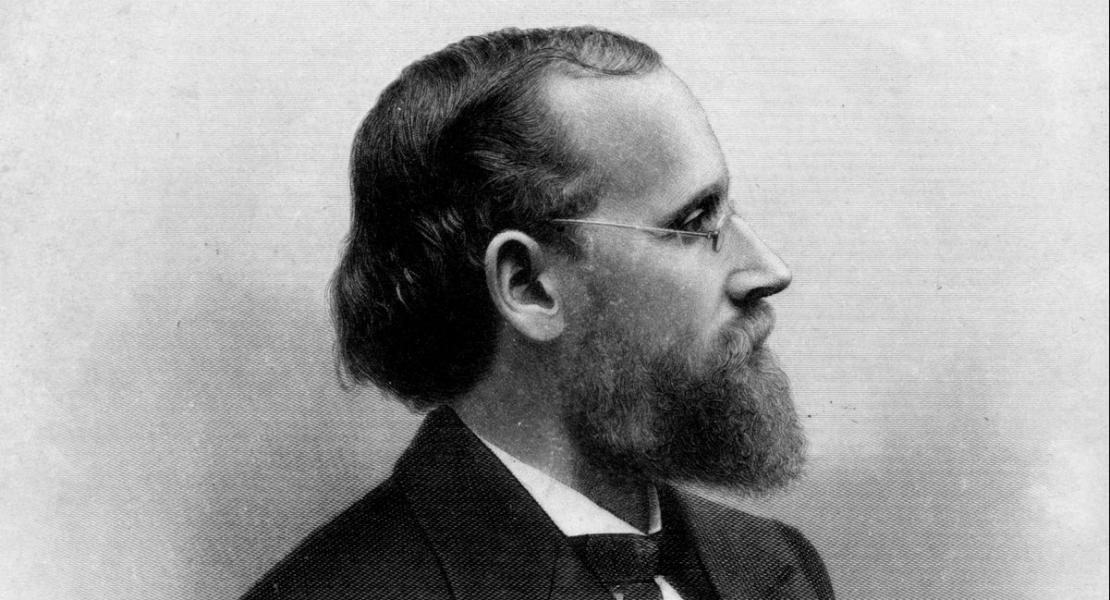 Born on September 10, 1835, in North Killington, Connecticut, William Torrey Harris was a philosopher and educator active in St. Louis between 1857 and 1880, and during that time he was perhaps Missouri’s most influential intellectual. He cofounded the St. Louis Philosophical Society (1866), established the Journal of Speculative Philosophy (1867), headed the administration of the St. Louis public schools (1866–1880), and provided the organizing force behind the St. Louis Movement in philosophy, education, and civic activism. He left Missouri in 1880 to direct a private “school” of philosophy in Concord, Massachusetts, and later served as US commissioner of education (1889–1906). During the last two decades of his life, he wrote and lectured widely as an educational authority and engaged in extensive editing projects, including Johnson’s New Universal Cyclopedia and Webster’s New International Dictionary. He died on November 5, 1909, in Providence, Rhode Island.

At no point was Harris’s impact so great as during his St. Louis period, when his activities achieved a remarkable ripple effect in Missouri, the United States, and internationally. His chief legacy to St. Louis was a tradition of innovation in educational philosophy and of competent school administration. Disciples included Susan Elizabeth Blow, founder of the American kindergarten movement, and Louis Soldan, Harris’s successor as superintendent of the public schools and eventual president of the National Education Association.

Harris devoted much of his immense energy to expounding the philosophy of G. W. F. Hegel (1770–1831), translating it into acceptable American terms—as one historian describes it, “making Hegel talk English”—and defending Hegelianism against the Anglo-Scottish empiricism of Locke, Hume, John Stuart Mill, and William Hamilton and the evolutionary materialism of Herbert Spencer and G. H. Lewes. It is according to the success or failure of this self-appointed task that Harris has been subsequently judged. Because the Hegelian philosophical system was so quickly superseded by technical developments in Western philosophy, it is tempting to dismiss Harris as a failure; however, to do so would ignore his many important contributions as well as miss the significance of St. Louis Hegelianism for American intellectual history.

In the first ten years after his arrival in St. Louis in 1857, Harris formed his mature views, and it is in the context of his career in the city that his thought and practice should be examined. Harris’s formal education in his native state of Connecticut was acquired haphazardly in rural and city schools, in no less than five private academies, and during three unhappy years at Yale College (he left without earning a degree). Although his own schooling had been disorganized, as an educational authority he advocated a strict system of age grading and promotion through academic accomplishment. His self-education was heavily skewed toward “metaphysical” authors and subjects, notably, the works of Coleridge, Carlyle, Goethe, Kant, and the American transcendentalists.

Harris found the Germanized cultural atmosphere of antebellum St. Louis congenial. He came to regard his acquaintance with Henry Conrad Brokmeyer at the Mercantile Library in 1858 as one of the turning points of his life, because the eccentric and rebellious German guided him through the morass of post-Kantian German philosophy. Meanwhile, Harris had secured a teaching position at Clay School and brought his New England bride, Sarah T. Bugbee, to St. Louis. He returned Brokmeyer’s intellectual favor by joining other local enthusiasts in commissioning “Brok” to translate Hegel’s Science of Logic into English. This arrangement, in fact, was the origin of both the Philosophical Society and the Journal of Speculative Philosophy.

As important as Brokmeyer’s tutelage to the development of Harris and the other St. Louis Hegelians (most notably at this time, Denton Jacques Snider and John Gabriel Woerner) was the shared experience of the Civil War in a border state traumatized by conflicting loyalties. Although Harris was honorably exempted from military service (the leadership of the public schools thought him indispensable), he was not slow to draw from the spectacle of the war a political-philosophical lesson that coincided with the conclusions he simultaneously drew from his study of idealist philosophy.

Harris believed in the Hegelian dialectic, in the action of ideas combining and transcending each other in the formation of higher syntheses. Two ideas that had been in conflict since the founding of the American Republic were liberty (expressed as political democracy) and property (including slavery). In Harris’s view, the Union “cause” in 1861 represented a “world-historical” attempt to reconcile the contradiction between democracy and slavery. The Union stood for individual liberty, while the agrarian-­capitalist aristocracy of the Confederacy denied the same to African American slaves. The persistence of the Southern slave system was to Harris a clear example of a society within American society resisting the evolution of its fundamental idea. Harris wrote to his uncle in Connecticut explaining his view of the war: “We are finding the rational internal limit to the freedom which we had secured externally before. Every world-historical nation has an idea posited as the basis of its consciousness that it must develop and bring out in all its forms.”

The outcome of the Civil War was to Harris and his fellows decisive proof of the validity of the Hegelian philosophy of history and of the truth of Hegelianism in general. The St. Louis Hegelians saw the war as a vindication of strong government, since it was through effective state-directed institutions (namely, state militias, the Union army, and Lincoln’s presidency) that the United States became reconciled to its national idea.

Harris regarded Hegelianism as a means of maximizing the potential for reconciliation between individuals and society, and as, in fact, the only philosophy through which to achieve the coexistence of individual wills with a tolerable degree of social harmony. The larger goal of Harris and his Hegelians, however, was to spread a democratic gospel of “speculative philosophy” that they insisted was an activity open to all with inquiring and critical minds and not merely to “professionals.” They believed speculative philosophy applied to fields as diverse as politics, historical thought, and education. Self-education or self-cultivation was to support formal schooling as an essential process in the education of the individual toward citizenship in a democratic society. According to Harris, speculative philosophy widely practiced would encourage the rational and cooperative qualities of human nature, and Hegelian thought, with its insistence on the role of the state as the great harmonizer of individual wills, seemed to offer a promising recipe of national unity for postwar America.

Harris was no proponent of an authoritarian state. Rather, he envisioned key roles for intermediate institutions—such as democratic local governments, public schools, and voluntary organizations like the St. Louis Philosophical Society—in curbing individual egotism and establishing norms for rational behavior. Historians have consequently described St. Louis Hegelianism, in contrast to some of its European varieties, as a liberal philosophy of progress well suited to what was still an undisciplined frontier society.

Harris and St. Louis Hegelianism never made an impact upon American philosophy equivalent to that of the pragmatism of John Dewey. Nevertheless, Hegelianism and other forms of absolute idealism did have their day in the American academy, particularly at Princeton, Cornell, and the University of California (whose philosophy department was established by George Howison, a St. Louis Hegelian). This was due in no small part to Harris and the Journal of Speculative Philosophy, in which some of the most important early essays of Dewey, C. S. Peirce, and Josiah Royce appeared. As for Harris’s independent philosophical work, Hegel’s Logic: A Book on the Genesis of the Categories of the Mind (1890) did not go beyond exposition of Hegel’s system.

Harris’s less than decisive impact on American philosophy might be explained by his lack of focus; he simply spread himself too thin. Yet his failure as a general philosopher obscures the more enduring impact of his educational philosophy and practice, both locally and nationally. Prominent educators of the first half of the twentieth century such as Nicholas Murray Butler of Columbia University continued to speak of Harris’s contributions with great respect. As superintendent of the St. Louis public schools, Harris provided firm direction during a period of growth and social change for the city. He demonstrated political tact in negotiating with the city’s German population over the use of the German language in the schools, though the legitimate claims of black St. Louisans for better educational provisions were largely ignored. Harris left the public school administration in the able care of Soldan and others, his essays on pedagogy and school organization were read around the world, and he was the obvious choice for the education commissionership. He was awarded many honorary degrees by American and European universities. One acknowledgment of his service to education in Missouri is Harris-Stowe College in St. Louis, named for him.

Although Harris remained confident in the ability of formal and continuing education to make Americans—including the inhabitants of newly acquired territories and protectorates—responsible citizens, he lost some of his faith in the Hegelian philosophy of history. Looking back in 1906 on the four decades following the Civil War, he detected no “hieroglyph of reason” revealing America’s national purpose, and he regarded the monopolizing tendency of American industry, trade unionism, and socialism as growing threats to liberty and property. His conservative style of reform was adopted by the majority of the St. Louis Movement during the last quarter of the nineteenth century, when the movement merged with other campaigns for social reform and municipal renovation.

Goetzmann, William H. The American Hegelians: An Intellectual Episode in the History of the American West. New York: Knopf, 1973.