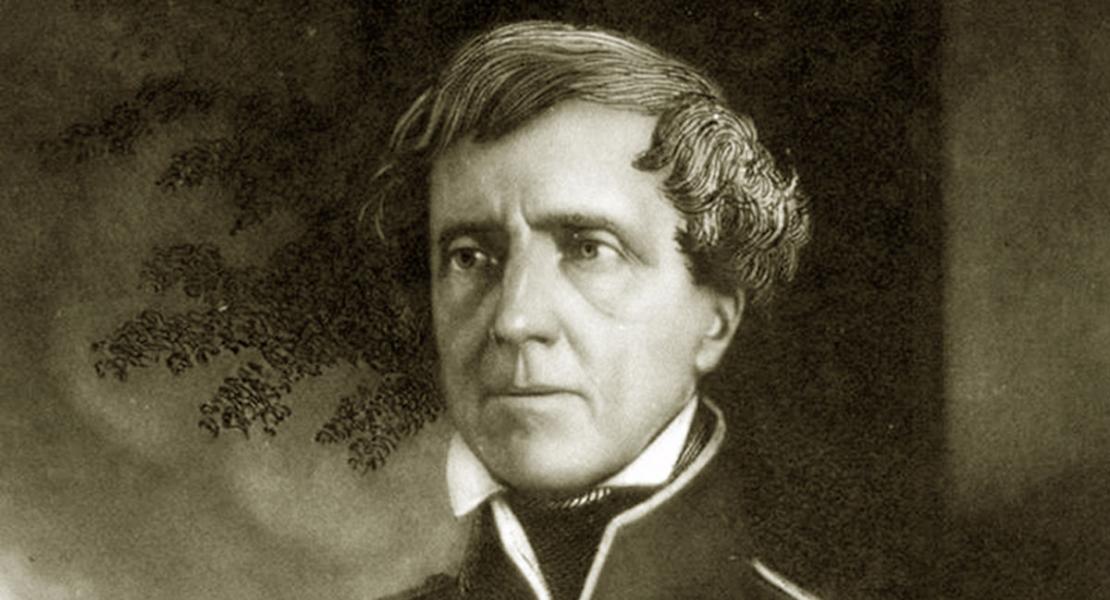 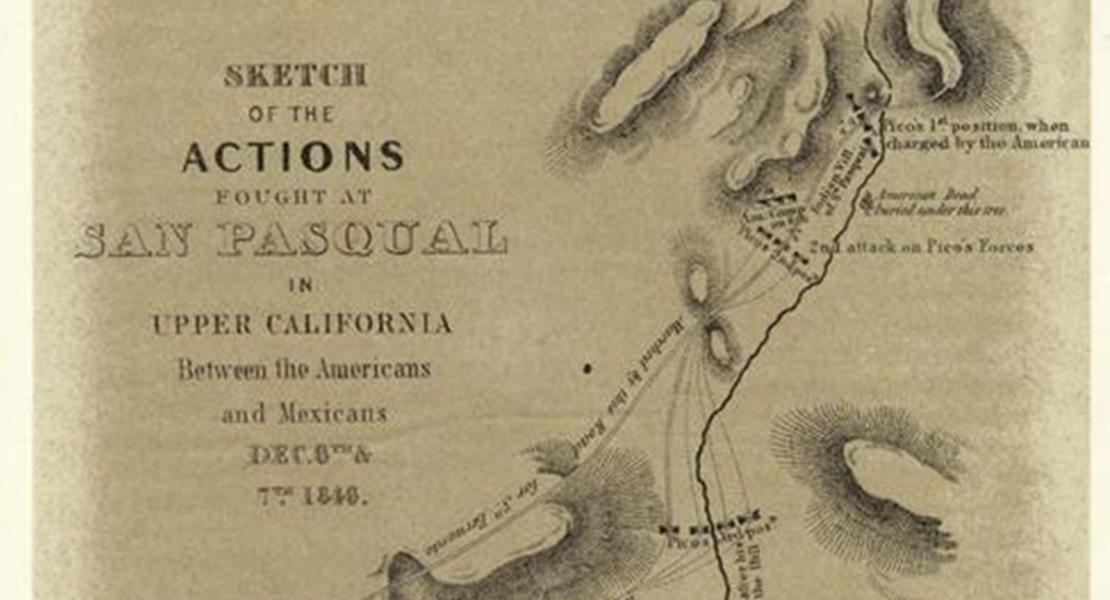 Stephen Watts Kearny was born on August 30, 1794, in Newark, New Jersey. He was the youngest child of a large and prosperous Tory family whose fortunes suffered only temporary setbacks during the Revolutionary War. Raised in comparative comfort, he attended Columbia University as a young man. Discovering an aptitude for military command in militia service, he won a lieutenant’s commission in the US Infantry in March 1812. He distinguished himself in the Battle of Queenstown Heights in 1813 and was later promoted to captain.

Kearny’s western career began in 1819, when he accompanied Colonel Henry Atkinson’s Yellowstone expedition. He served at various western posts from Fort Detroit to Baton Rouge and led four infantry companies on Atkinson’s second Yellowstone expedition in 1824–1825. Kearny’s men began the construction of Jefferson Barracks near St. Louis in the summer of 1826. The new post became the army’s command and supply depot for the entire Mississippi valley.

Kearny’s promotion to full major in 1829 was celebrated in St. Louis, where he had forged warm friendships among the city’s leading families. In September 1830 he married William Clark’s step­daughter Mary Radford, forming a union that withstood the rigors and enforced separations of frontier army life. The couple raised nine children.

In 1833 Congress authorized the organization of the First Regiment, US Dragoons, with Colonel Henry Dodge commanding. Kearny, now a lieutenant colonel, was named second in command, with extensive responsibilities for recruiting and training. When Dodge resigned in 1836, Kearny was promoted to colonel and assumed command of the regiment. The assignment was due in part to his St. Louis connections: his friend, US senator Thomas Hart Benton, led the fight for the new regiment. However, Kearny’s promotion was also largely based on his reputation for efficiency, for the discipline, training, and morale of the soldiers in his command, and for his diplomatic skill and experience in dealing with Indians and frontier settlers.

Kearny was an early spokesman for the strategy of concentrating the army’s limited manpower at a few permanent posts, from which mobile units might patrol roads and trouble spots. Creation of the First Dragoons, who would be stationed at Fort Leavenworth, Kansas, but would patrol a thousand miles of frontier, was a step in implementing the strategy, and Kearny was the logical choice as commander.

From 1837 to 1841, Kearny’s dragoons patrolled the frontier, escorted displaced eastern Indians to their assigned lands in Indian Territory, and policed the Oregon and Santa Fe Trails. When they were not on duty in the field, Kearny kept the men busy at drill and training exercises, and made the First Dragoons the army’s model unit. In 1837 he published the first training manual for US dragoons. More than any other man, Kearny was responsible for creating this new branch of the service, forerunner of the US cavalry. He also assisted younger men, Philip St. George Cooke and Philip Kearny among them, in establishing military careers that would later be of great importance to the United States.

In 1842 Kearny assumed command of the Third Military Department, headquartered at St. Louis. In 1845 he led an expedition to South Pass along the Oregon Trail to patrol, show the flag, and treat with tribes along the route. His were the first US troops to reach South Pass. He concluded his remarkable march with a long swing southward along the New Mexico border, to Arkansas Fort and Bent’s Fort. The march conditioned his men to the rigors of desert campaigning and provided crucial reconnaissance when war with Mexico commenced in 1846.

At the declaration of war with Mexico, Kearny was ordered to organize an expedition that would secure the Santa Fe Trail, seize New Mexico and establish a temporary government, and then continue west to conquer California. The federal government requested two thousand Missouri volunteers and authorized raising companies of Mormon volunteers from the parties then on their way west from Nauvoo, Illinois. Kearny had no trouble recruiting men. The war was a popular cause in Missouri; the idea of taking New Mexico and the Santa Fe trade, with California in the bargain, fired patriotic ardor. Kearny had useful connections with leading St. Louis families and was widely respected as a brave and capable leader who looked after his men’s welfare. Volunteers flocked to his banner.

The training, discipline, and spirit that Kearny drilled into his dragoons carried them through the grueling march to Santa Fe. The regulars provided a valuable example to the Missouri volunteers, disgruntled by the rigors of campaigning. Kearny’s Army of the West walked the 856 miles to Santa Fe in less than two months. They encountered no serious resistance; the Mexican governor and his troops retreated without giving battle. The Americans entered Santa Fe on August 18, 1846.

For the next six months Kearny acted as the military governor of New Mexico. On his orders, four Missouri lawyers serving with the volunteers wrote a code of laws for the province, which Kearny proclaimed with a bill of rights on September 22, 1846. He was later reprimanded for an unconstitutional assumption of civil authority, though his orders seemed to require such action. The administration of conquered provinces was a new problem for a federal government not yet prepared to deal with the constitutional implications of Kearny’s success. Nevertheless, the so-called Kearny Code remained the basis of New Mexican law when the territory was incorporated into the United States. Kearny remained at Santa Fe long enough to build Fort Marcy, further strengthening the American position. Then, having appointed Charles Bent as governor and Frank Blair as district attorney for the territory, he continued on to California to complete his mission.

Colonel Alexander W. Doniphan and most of the volunteers were left behind to hold Santa Fe and Taos, with orders to join the American armies south of the Rio Grande when relieved by Colonel Sterling Price and a fresh contingent of Missourians. Meanwhile, as Kearny and about three hundred men on mules blazed a trail to California, Lieutenant Colonel Philip St. George Cooke and the Mormon Battalion followed, cutting a wagon road through the rugged desert country: Kearny intended to create the necessary support system to secure his conquest.

En route to California, Kearny’s command intercepted dispatches from Commodore Robert Stockton of the US Navy announcing that he had landed with marines and pacified California. Now assured that his route lay open, and already encountering difficulty in finding sufficient food and water for men and animals, Kearny again split his command, sending all back to Santa Fe except for a guard of 110 men and two mountain howitzers. As they approached California, the exhausted Americans learned that Stockton’s assurance had been premature, that the Californians had rallied against him, and that the war was on again.

In early December Kearny’s command encountered an enemy force directly in their path. The Americans were badly outnumbered, but they desperately needed the fresh mounts and supplies in the Californians’ camp. Counting on the element of surprise to provide a quick victory and a much-needed boost of morale for his men, Kearny attacked. In the Battle of San Pasqual on December 6–7, 1846, the Americans held the field, but more than one-third of the command was killed or wounded, and Kearny himself was seriously wounded by enemy lances.

Kearny’s battered force struggled to join Stockton’s men at Monterey. The two officers led a joint expedition in January 1847 and dispersed the Californians at the Battle of the Mesa on the San Gabriel River on January 9. When they disagreed on further action, however, Kearny demanded Stockton recognize his authority; Stockton refused. Lieutenant Colonel John Charles Frémont, who had previously entered northern California with a small force and joined in the Bear Flag Revolt in June 1846, sided with Stockton. New orders arrived from Washington in February, clearly sustaining Kearny’s authority. For the next three months he acted as military governor of California, consolidating the American position and establishing a temporary government. He returned to the United States in the summer of 1847.

Frémont’s continued defiance forced the general to take action against the young officer, despite his regard for Frémont’s family, particularly his father-­in-law and Kearny’s friend, Thomas Hart Benton. After a long and bitter court-martial, Frémont was found guilty of all charges and sentenced to dismissal from the army. Although the president, James K. Polk, restored him to duty, Frémont resigned rather than accept the verdict. He and his powerful father-in-law launched a relentless vendetta to discredit Kearny.

Meanwhile, Kearny was sent to Mexico to assist in concluding military operations. He arrived in April 1848 as military governor of the key port city of Veracruz. Almost immediately he became sick with malaria, and never fully regained his health. He managed to serve competently as military governor of Mexico City in May and June, supervising the final evacuation of US troops.

Kearny returned to the United States in July and resumed command of the Sixth Military District, headquartered at Jefferson Barracks. On September 7, 1848, he was appointed brevet major general, despite Benton’s vigorous opposition, but the victory was hollow. Worn out by years of hard campaigning, he could not withstand the ravages of the fever contracted in Mexico. Kearny died on October 31, 1848, at the country house of his old friend Meriwether Lewis Clark, near St. Louis. His enemies, Benton and Frémont, survived to have the last word, obscuring the contributions of a dedicated soldier.

With his dragoon regiment, Kearny helped shape the army of the trans-Mississippi West. More than any other individual, he was responsible for securing the Southwest for the United States in 1846–1847. Contemporary Missourians remembered him as a brave and efficient soldier who for years stood guard over their western border.

Gorenfeld, Will, and John Gorenfeld. Kearny’s Dragoons Out West: The Birth of the U.S. Cavalry. Norman: University of Oklahoma Press, 2016.