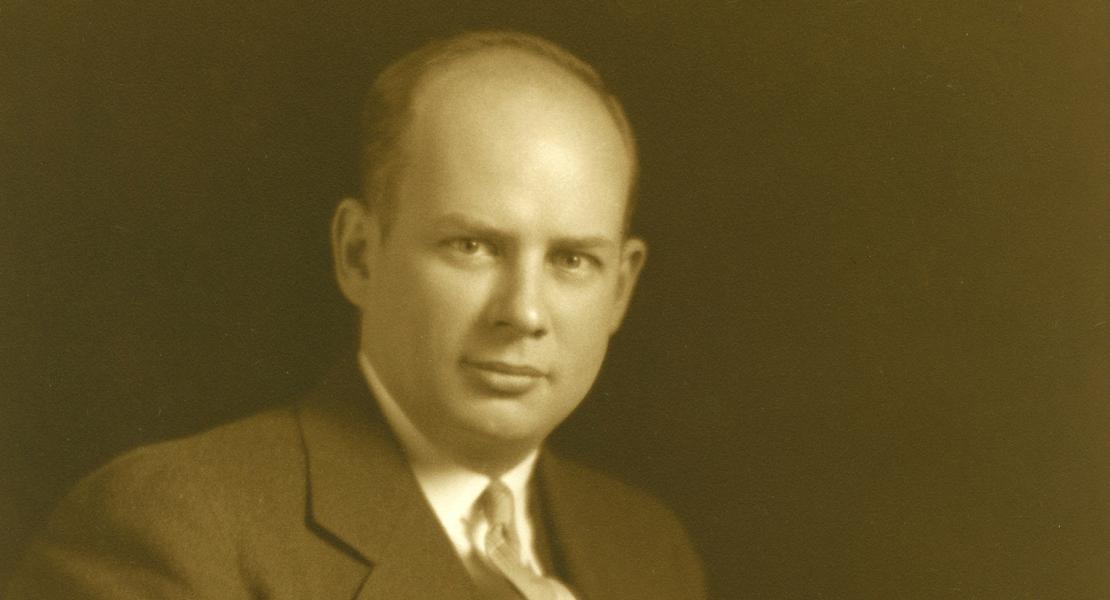 One of the foremost authorities on the history of culture, art, and society in the Mississippi valley from colonial times to the mid-nineteenth century, John Francis McDermott III produced many seminal monographs and trenchant articles that focused both scholarly and popular attention on the contributions of St. Louis and the state of Missouri to national development. As an Americanist of the first rank in his generation, McDermott has long been appreciated as a pioneering figure in the interdisciplinary American Studies movement.

Born in St. Louis on April 18, 1902, McDermott was the son of John F. and Mary Steber McDermott. His father practiced law in St. Louis. The young McDermott attended Price School and, later, Clayton High School. Graduating from Washington University in 1923, he received a Master of Arts degree in English from that institution in 1924, the same year in which he married Mary Stephanie Kendrick. The marriage produced one child, John Francis McDermott IV.

During his nearly fifty years of service at two universities, McDermott enjoyed a productive career in writing, research, teaching, and speaking. As a young instructor of English he edited a trade edition of The Collected Verse of Lewis Carroll. He also coauthored with Kendall Taft and Dana Jensen the popular textbook The Technique of Composition, which went through several editions.

By the mid-1930s McDermott had translated his general love of writing and textual editing into a lifelong study of the cultural growth of his native Missouri. Beginning with such short pieces as “Paincourt and Poverty” in Mid-America and “The Confines of a Wilderness” in the Missouri Historical Review, he examined the region’s local story within the national and international context of French colonial history.

In 1938 McDermott published Private Libraries in Creole St. Louis. By this time he was regularly producing published papers about the history of printing, books, journalism, and settled institutions of the early Mississippi valley. A strong theme developed in all his subsequent work that celebrated what he felt was the neglected record of steady cultural growth, sophistication, and progress in the region. He also began producing editions of early pioneers’ journals, diaries, and rare printed or manuscript accounts and letters by the keenest observers of the frontier period, including Washington Irving, John Treat Irving, Alfred S. Waugh, Matthew C. Field, and Henry Marie Brackenridge. McDermott began a long association with the University of Oklahoma Press when he edited such works as Tixier’s Travels on the Osage Prairies (1940) as well as The Western Journals of Washington Irving (1944) and Irving’s Tour on the Prairies (1956).

McDermott promoted the publication of the primary documents and basic texts of St. Louis history. He founded the St. Louis Historical Documents Foundation, which published under his specific or general editorship The Early Histories of St. Louis (1952), Old Cahokia (1949), and Before Lewis and Clark: Documents Illustrating the History of the Missouri, 1785–1804, by Abraham P. Nasatir (1952). He was the general editor of Travels on the Western Waters, a noted series of works long out of print and other primary sources, for Southern Illinois University Press. He also produced important reference works, including A Glossary of Mississippi Valley French (1941).

McDermott held numerous professional memberships and was the associate editor for the French­American Review. He served on the editorial board of the Old Northwest and was a trustee of the Missouri Historical Society, the William Clark Society, and a founder of the St. Louis chapter of the Westerners International.

McDermott received many academic honors, including awards from the French and Spanish governments and from academic societies in those countries. He was awarded honorary doctorates in humane letters from the University of Missouri–St. Louis and from Southern Illinois University at Edwardsville. He was the recipient of numerous research grants and fellowships, including a Guggenheim Fellowship in 1954, a Newberry Library Fellowship in Midwestern Studies in 1947, and many grants from the American Philosophical Society from 1939 to 1964. At the time of his death on April 23, 1981, John Francis McDermott was involved in a number of unfinished research projects, including a long-intended biography of his famous ancestor Laclède.