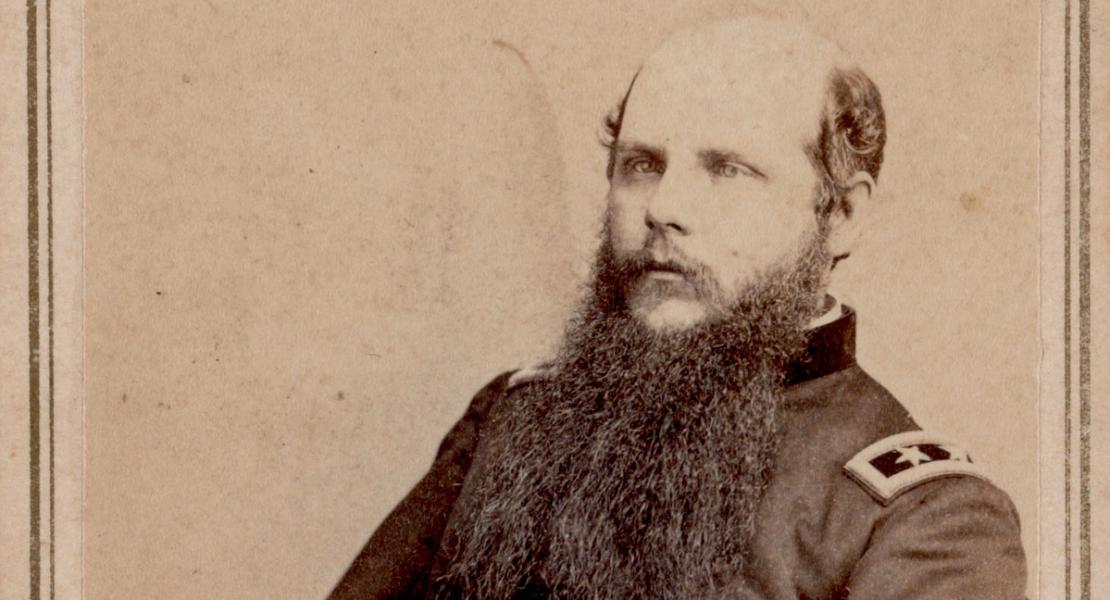 John McAllister Schofield was born in Gerry, Chautauqua County, New York, on September 2, 1831, the son of James and Caroline McAllister Schofield. His father was a Baptist minister, and in 1843 the family moved to Freeport, Illinois. Schofield taught school briefly and considered law studies, but instead accepted a cadetship at the US Military Academy in 1849, from which he graduated in 1853, seventh of fifty-two in his class. After serving briefly in Florida with the First Regiment of Artillery, in 1855 he was appointed first lieutenant and returned to West Point to teach natural philosophy. In 1857 he married Harriet Bartlett, the daughter of the chair of the philosophy department. In 1860, without resigning his army commission, Schofield left West Point on a year’s leave of absence and became a professor of physics at Washington University in St. Louis.

This civilian position placed Schofield at the center of the secession crisis in St. Louis. On April 15, 1861, the day Abraham Lincoln issued a call for seventy-five thousand volunteers to put down the Southern rebellion, the War Department contacted Schofield, detailing him to act as mustering officer for the state of Missouri. Schofield quickly notified Missouri governor Claiborne Fox Jackson of his presence in the state, but as Jackson had no intention of enlisting Missourians in a war that its populace had opted to avoid, Schofield received no reply.

Within a week US congressman Frank Blair, leader of the radical Unionists in St. Louis, learned of Schofield’s presence in the city and secured his authority to enlist volunteers into federal service, which the moderate department commander William S. Harney had heretofore refused. With Schofield’s aid, Blair and arsenal commandant Nathaniel Lyon, a regular army captain, enlisted four volunteer regiments and a reserve corps consisting of two more “Home Guard” regiments, totaling more than six thousand troops, into the federal ranks. Lyon, now a brigadier general of volunteers, commissioned Schofield a major in the First Missouri Volunteer Infantry regiment.

Schofield participated in the Camp Jackson affair in St. Louis in May 1861, and in June was named chief of staff of Lyon’s Army of the West. In the summer of 1861 he assisted in the campaign to Jefferson City, the skirmish at Boonville, and the march to Springfield. He participated in the Battle of Wilson’s Creek and personally informed General Samuel Sturgis of his accession to command upon Lyon’s death. Following the battle, Schofield was offered a captaincy in the regular army, but he declined, opting to remain with his own regiment, which he had organized as artillery. In November 1861 he became a brigadier general of volunteers and headed the Missouri State Militia, organizing the force to suppress pro-Confederate guerrilla activity in the state.

In the fall of 1862 department commander Samuel Ryan Curtis named Schofield to command all federal troops in the Southwest, with headquarters at St. Louis. Schofield supervised Union operations in Missouri and northern Arkansas and took an active role in the controversy surrounding the emancipation of slaves in Missouri.

Although he was nominated for a major generalship in the volunteer army in November, political opposition by Radicals, resulting from his involvement in the factionalism in Missouri, blocked Schofield’s Senate confirmation, and he reverted to his original rank. Embarrassed by the incident, he applied for a new adjustment in the spring of 1863 and was transferred to the Fourteenth Army Corps stationed in Tennessee. In May he received his appointment as major general, and returned briefly to St. Louis to command the Department of the Missouri.

In February 1864 Schofield assumed command of the Twenty-Third Corps and led it through the rest of the war, serving in Georgia, Tennessee, and the Carolinas. Following the war he served briefly as secretary of war under Ulysses S. Grant, was promoted to major general in the regular army, and from 1876 to 1881 served as superintendent of West Point. In 1888 Schofield was named commanding general of the army. He retired in 1895 with the rank of lieutenant general. He died in St. Augustine, Florida, on March 4, 1906, and is buried in Arlington National Cemetery.