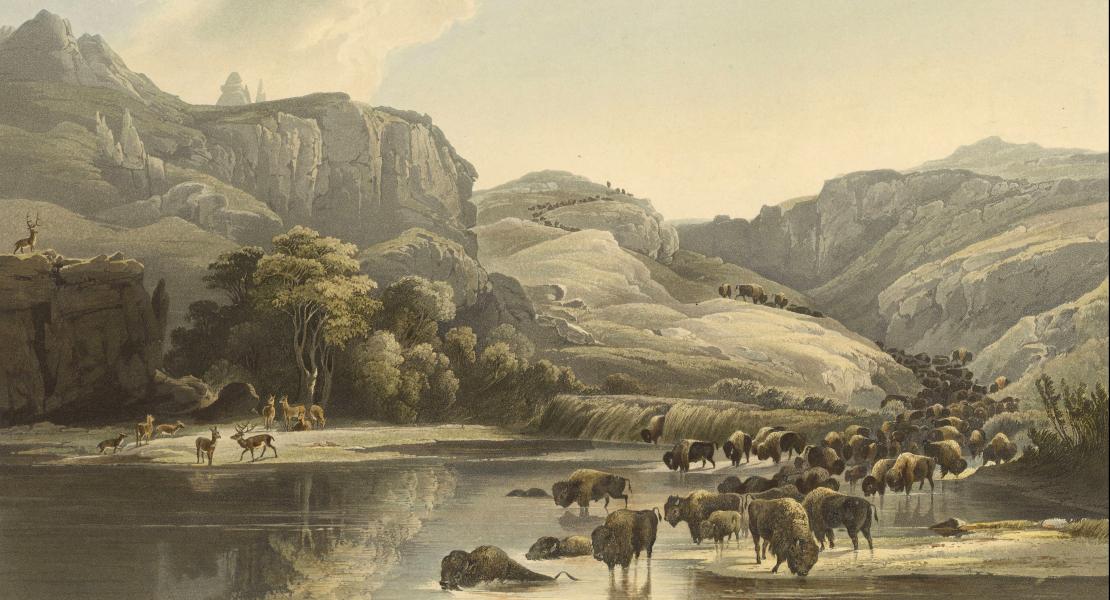 William Lewis Sublette was born at Stanford, Kentucky, on September 21, 1799. The family moved to St. Charles, Missouri, in 1817, where his father kept a tavern, speculated in land, and engaged in farming and town politics. As a young man, William followed these various pursuits and served as town constable from 1820 to 1823. Life in St. Charles did not satisfy his adventurous and entrepreneurial spirit, however. His younger brother Milton had already ventured to the upper Missouri as a trapper, and William decided to follow him.

Sublette joined William H. Ashley’s second expedition to the upper Missouri and the Yellowstone in 1823. He took a prominent part in the fight with the Arikara, which stopped Ashley’s ascent of the river, and in the subsequent punitive raid led by Colonel Henry Leavenworth.

Sublette then joined a party sent by Ashley to find an overland route to the Rocky Mountains. He spent the next two years in the mountains, trapping with Jedediah Smith and other Ashley men. In 1826 Sublette, Smith, and David Jackson bought Ashley’s business in the mountains. They soon learned, as Ashley had, that the real profits were to be made in St. Louis, supplying trappers and selling their furs. Frustrated by the declining supply of fur-bearing animals and the intense competition from the British, Indians, and John Jacob Astor’s American Fur Company, the partners sold out to the new Rocky Mountain Fur Company in 1830.

After an unsuccessful attempt to break into the Santa Fe trade, Sublette formed a new partnership with an old friend, Robert Campbell, while maintaining close ties with William Ashley. Drawing on Ashley’s connections with eastern suppliers and credit, the two continued to supply and market furs for the Rocky Mountain Fur Company and other trappers. They opened posts along the Missouri River, successfully challenging the powerful American Fur Company’s monopoly of the river trade. While Campbell managed the river posts, Sublette, a shrewd and calculating businessman, took charge of supply, credit, and marketing. In 1834 he maneuvered the partners of the American Fur Company into an agreement dividing the river and mountain trade between the two companies. He and Campbell withdrew from the Missouri River and established Fort William on the Laramie Fork of the North Platte.

In 1836 Sublette and Campbell sold their interests in the mountains to the Rocky Mountain Fur Company and opened a wholesale and retail business in St. Louis. For a few years the store prospered, and Sublette continued to invest widely in land, insurance companies, and other ventures. His pride was Sulphur Springs, a 779-acre tract outside St. Louis, where he built a fine house in 1834. In addition to experiments with new crop varieties and livestock breeding, he sold coal and lumber from his land, and in 1837 opened a resort hotel at its mineral springs. Sublette served on the board of directors for the Bank of Missouri and was active in state politics as a hard­money Democrat.

By 1840 the effects of a national depression had stifled commerce in St. Louis, and Sublette again decided to withdraw from a declining business. In 1842 he and Campbell dissolved their partnership, and Sublette turned his attention to his farm, real estate, business investments, and state politics. In 1843 he joined his friend Sir William Drumond Stewart on a pleasure trip to the Rocky Mountains to relive their memories of the fur trade a decade before.

Sublette actively campaigned for Democratic candidates in the election of 1844 and served as a presidential elector that year. He was appointed director of the State Bank of Missouri, but was disappointed in his hope for an appointment as an Indian agent.

In 1845 Sublette married Frances Hereford, the daughter of the manager of his Sulphur Springs resort, and later that year took his new bride on a trip to the East. His health had been declining for some years, probably from tuberculosis. He became seriously ill at the outset of the trip and died at Pittsburgh on July 23, 1845.

Five Sublette brothers sought their fortune in the fur trade. The youngest, Pinckney, was killed by Blackfeet on his first trip west in 1828. Milton (1801–1837) was one of five partners of the Rocky Mountain Fur Company, though financial success always eluded him. Andrew (1808–1853) and Solomon (1810–1857) moved between trapping, the Santa Fe trade, and other ventures, without leaving their mark on any. Only William achieved prominence: he helped pioneer the Overland Trail, and he was the first to prove that wagons and cattle could be taken across the Great Plains. One of the more adventurous and successful of the St. Louis merchants, William Sublette helped build St. Louis as the commercial center of the West. His life provides a case study of the early nineteenth­century western entrepreneur.