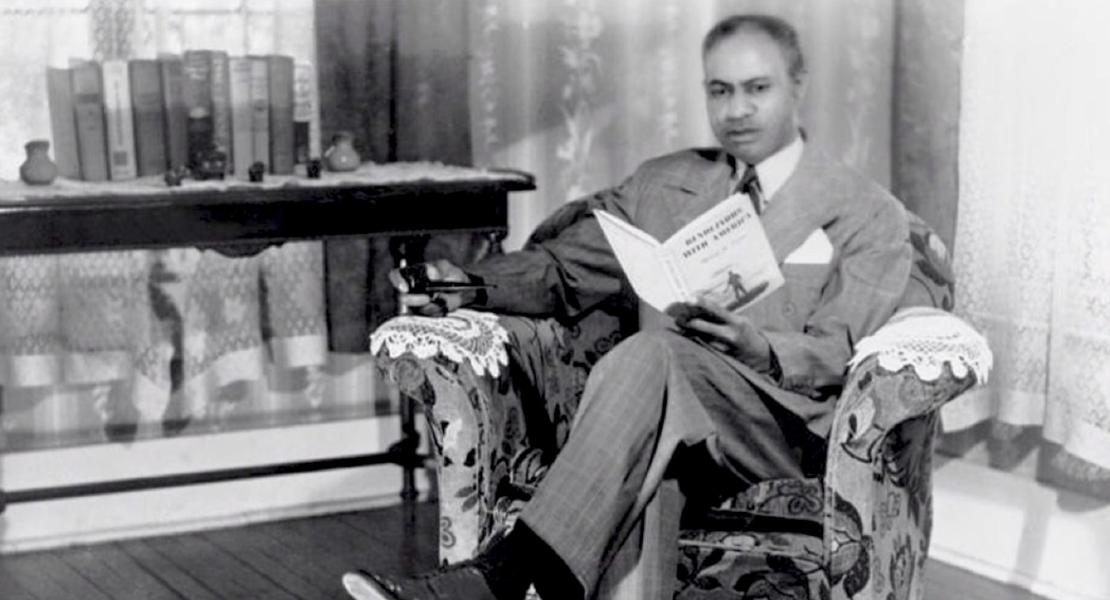 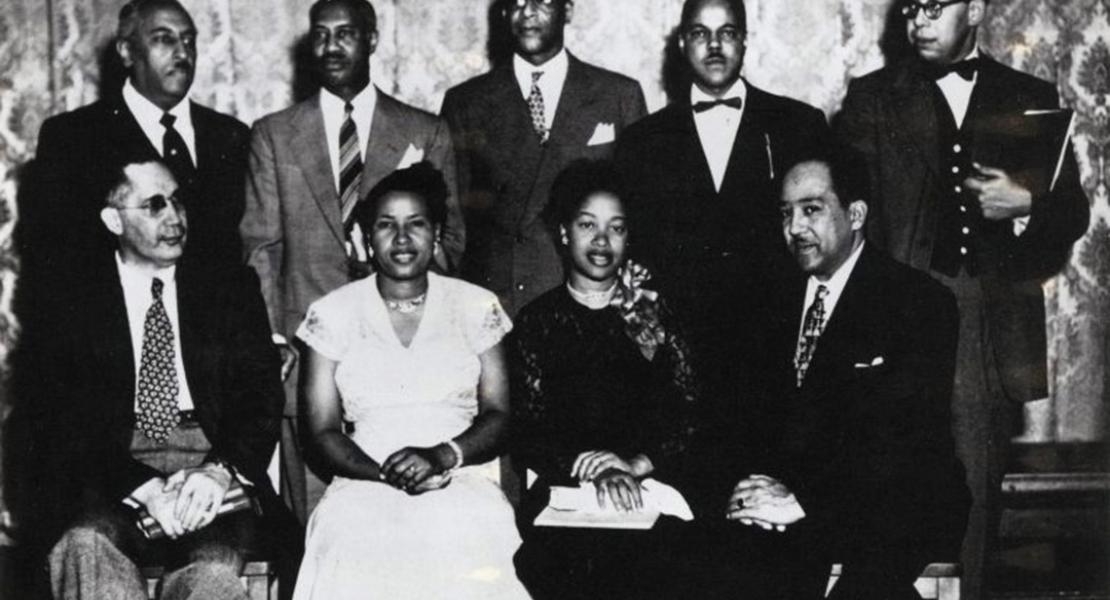 Through most of his life, Melvin B. Tolson claimed he was born with the twentieth century in 1900. He was in fact born on February 6, 1898, in Moberly, Missouri. His father, a novice Methodist minister, was moved to churches in various Missouri and Iowa towns until the family settled in the Kansas City area when Tolson was of high school age. He graduated from Kansas City’s Lincoln High School and entered Fisk University in 1919. He transferred to Lincoln University in Pennsylvania the following year.

During his junior year, Tolson married Ruth Southall, and his first son was born the month he graduated, June 1923. The Tolsons moved to Marshall, Texas, and that fall he began teaching in the English department at Wiley College. Two more sons and a daughter soon followed. All three sons later earned PhDs, and both his daughter and wife earned Master of Arts degrees. Despite a few notable conflicts, Wiley College provided the Tolson family a congenial and stimulating community for twenty-four years.

Tolson became a challenging teacher, a legendary debate coach, and an effective drama director. In 1931 he was given leave to work on a master’s degree at Columbia University. His master’s thesis, a study of the Harlem Renaissance, focused his long-held writing ambitions. Harlem’s promise as the cultural capital of African Americans seized his imagination and never let go. Over the next several years he wrote more than 150 poems for A Gallery of Harlem Portraits, modeled on Edgar Lee Masters’s Spoon River Anthology. The book was never published during Tolson’s lifetime, but V. F. Calverton, a friend and supporter, published some of its poems in Modern Quarterly.

From 1937 to 1944 Tolson wrote a provocative weekly column, “Caviar and Cabbage,” for the Washington Tribune, but his big publishing break came when “Dark Symphony” was chosen as the prize poem of the American Negro Exposition in Chicago in 1939 and was later published in Atlantic Monthly. When editor Mary Lou Chamberlain moved from Atlantic to Dodd, Mead, she admired the poem sufficiently to invite Tolson to submit a manuscript, which became his first published book, Rendezvous with America (1944).

The challenge of responding to his new honor led Tolson to a profound change in his poetry. He embraced the modernist revolution in poetry signaled by the examples of T. S. Eliot and Ezra Pound, but he continued to insist on the need for revolutionary social change. In 1949 he asked Alan Tate to write a preface for his Libretto for the Republic of Liberia. Karl Shapiro then published Tate’s preface and section “Ti” from the Libretto in Poetry in 1950. Decker Press, Libretto’s scheduled publisher, abruptly folded when one of its leaders died in an automobile accident, delaying Libretto’s appearance as a book until 1953. Meanwhile, Poetry awarded Tolson its Bess Hakim Prize for his ironic meditation on the racial dilemma then confronting an African American poet, “E. & O. E.”

Langston, Oklahoma, was founded, and continued, as an African American community. The Tolsons bought a modest house there in 1950, and in 1954 Melvin Tolson was elected mayor. He was reelected three times and bowed only reluctantly to his family’s insistence that he give up his civic role to have more time for his writing. In 1954 Liberia conferred upon Tolson the Order of the Star of Africa; Robert Frost’s home base, the Bread Loaf Writers’ Conference, offered him a fellowship in poetry and drama; and Lincoln University conferred upon him an honorary doctorate of letters.

In 1956 Tolson attended Liberian president William Tubman’s third inauguration in Monrovia, then stopped overnight in Paris to visit Richard Wright and Melvin Jr., who was studying at the Sorbonne. Tolson had already begun the demanding task of composing his epic Harlem Gallery, but he did not read galley proofs of Book 1: The Curator—there would be four more books—until the spring of 1964, just as he was diagnosed with terminal cancer. His family was told he had six months to live.

Karl Shapiro wrote a much-publicized introduction for Tolson’s final book and praised him even more highly than Tate, but he took sharp issue with Tate’s previous praise. Shapiro’s grand liberal claims for Tolson, however, were as culturally questionable as Tate’s conservative paternalism and triggered a reaction among African American critics that gave all too easy an excuse for readers to avoid the challenge of Tolson’s poems.

However, Harlem Gallery brought Tolson attention, if not understanding. Lincoln University conferred a second honorary doctorate of letters, and Tuskegee University invited him to assume the Avalon Chair of Humanities for 1965–1966. In 1966 he was inducted into the American Academy of Arts and Letters along with John Barth, James Dickey, Josephine Herbst, and Gary Snyder. He lived a rewarding two years after his cancer was diagnosed, dying on August 29, 1966.

The life of Tolson’s poetry in American culture is still in doubt, but Michael Berube, after detailing the failure of critics, both white and black, to engage Tolson’s major achievement, has outlined a reception theory that makes Harlem Gallery available to postmodernist readers in Marginal Forces/Cultural Centers: Tolson, Pynchon, and the Politics of the Canon.

Robert M. Farnsworth was a professor emeritus of English at the University of Missouri–Kansas City.

Tolson, Melvin B. Caviar and Cabbage: Selected Columns by Melvin B. Tolson from the Washington Tribune, 1937–1944. Edited by Robert M. Farnsworth. Columbia: University of Missouri Press, 1982.