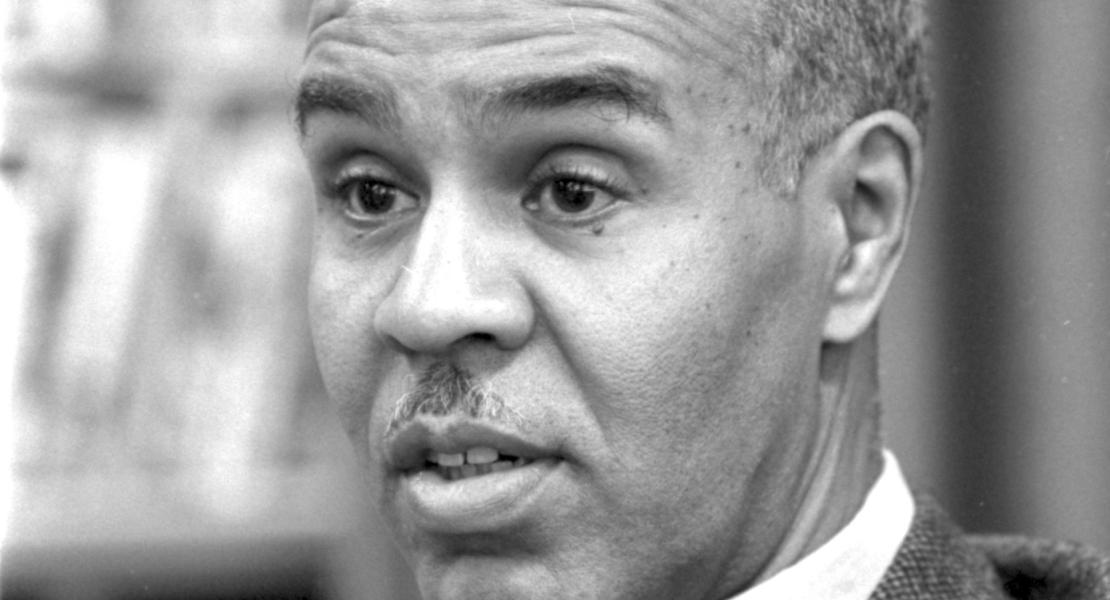 Roy O. Wilkins was born on August 30, 1901, in St. Louis. Five years earlier, the US Supreme Court issued its decision in Plessy v. Ferguson, the case that endorsed racial segregation. Within a few years an elaborate system of state-sanctioned segregation controlled virtually every aspect of race relations in the United States. Under this system African Americans were relegated to a subordinate legal status, and an era of unquestionable white supremacy reigned. These conditions prevailed when William and Mayfield Wilkins migrated to St. Louis from Mississippi in 1900. Roy Wilkins would later dedicate his life to the elimination of this system.

The Wilkins family lived in St. Louis long enough to allow Roy to enter grammar school, but a few years later Mayfield Wilkins died. Roy, his brother Earl, and his sister Armanda were sent to live with an aunt and uncle in St. Paul, Minnesota, where Roy attended public elementary and high schools. During his high school years, he developed an interest in writing and was eventually elected president of the school’s literary club.

Wilkins graduated from high school in 1919. He enrolled as a freshman at the University of Minnesota that fall. While attending the university he became a reporter for the college newspaper, the Minnesota Daily. During his undergraduate years, Wilkins also worked as the editor of a local Black weekly, the St. Paul Appeal. Shortly before his graduation, Wilkins was offered an editor’s position by the owner of a Missouri newspaper, the Kansas City Call. He accepted the offer and moved to Kansas City.

The Kansas City Call was a Black-owned newspaper that served Kansas City’s African American community. Wilkins frequently reported episodes of racial injustice and authorized numerous editorials that advocated the cause of civil rights. He soon established a reputation as a crusader for equal rights. Wilkins met Minnie Badeau, who had moved to Kansas City from St. Louis, and the two were married in 1929.

Wilkins joined the Kansas City branch of the NAACP and later became the secretary of that organization. During a national convention he met Walter White, the executive secretary of the civil rights organization. In 1930 Wilkins received an offer from W. E. B. DuBois to serve as the business manager of the Crisis, the NAACP’s in-house publication. Although the Crisis had enjoyed enormous success as the most influential publication in the African American community, it had fallen on hard times by 1930. When DuBois offered him the position, Wilkins declined based on numerous reports he had heard about DuBois’s prickly personality.

A few months later White offered Wilkins another position at the national headquarters. After a visit to New York, Wilkins accepted the position of assistant secretary. Not long after Wilkins joined the NAACP’s staff, the organization underwent a dramatic change in direction. DuBois, a founder and the nationally known voice of the organization, published a series of editorials in 1934 that ran under the heading of “Segregation.” In these essays he argued that rather than concentrating on what he deemed a futile effort to eliminate segregation, the Black community needed to devote its energies to establishing and strengthening its institutions—schools, churches, and Black-owned business enterprises. Although they were not intended as such, the editorials were widely construed as advocating the abandonment of the NAACP’s long-standing struggle for the civil rights of African Americans. This sent shock waves throughout the Black community. Not long afterward the NAACP’s board reacted by demanding preapproval of all future editorials. DuBois, who had long enjoyed editorial independence, angrily resigned.

Wilkins succeeded DuBois as the editor of the Crisis. At about the same time the NAACP embarked on a long-range, carefully orchestrated litigation campaign in which the separate-but-equal doctrine of Plessy was challenged in the Supreme Court. By 1940 the NAACP had established the Legal Defense and Education Fund, headed by Thurgood Marshall, which was responsible for the litigation effort. Lobbying and other activities were directed by White. Wilkins took over the day-to-day operations of the NAACP’s New York office.

When the United States entered World War II in 1941, the NAACP turned its attention to fighting segregation and discrimination in the military. Wilkins and White were at the center of these efforts. During this period the NAACP continued, without success, to persuade Congress to pass federal antilynching legislation. At the conclusion of the war, however, years of lobbying and litigation began to bear fruit. President Harry S. Truman issued an executive order in 1948 that banned discrimination in the federal civil service and in the military. During the same year an impressive Supreme Court victory was won in a housing discrimination case, Shelley v. Kraemer.

In 1950, three significant desegregation opinions were issued. In Sweatt v. Painter, McLaurin v. Oklahoma, and Sipuel v. Oklahoma, the Supreme Court held that states could not operate segregated graduate schools unless equal facilities were provided for Black students. Since the southern states had failed to provide any graduate training opportunities for Blacks, they were forced to admit Black students to the all-white graduate schools. While these cases were pending, a series of cases involving primary schools were working their way through the lower courts. In 1954 these cases were decided by the Supreme Court’s opinion in Brown v. Board of Education, which declared racial segregation in public education a violation of the Fourteenth Amendment. Brown represented the culmination of the NAACP’s litigation strategy. State-sanctioned segregation was on the way out.

By the early 1960s college students had begun to sit in at segregated lunch counters in the South. “Freedom riders” traveled on buses to southern terminals, challenging segregated travel facilities. Several new organizations were spawned. King’s Southern Christian Leadership Conference, the Congress of Racial Equality, the Student Nonviolent Coordinating Committee, and others competed with the NAACP for the leadership of the civil rights movement. At times the various groups cooperated. The 1963 March on Washington was the product of such an effort, but there were deep ideological differences.

The NAACP was essentially a conservative organization. It had formally adopted an anticommunist policy during the early 1950s. DuBois, who had gradually drifted toward a more radical ideology, was all but ignored. The leftist and sometimes separatist views of the student radicals of the 1960s created deep divisions within the civil rights movement. With the emergence of charismatic leaders such as King, the NAACP’s influence began to wane. In the mid-1960s, however, the NAACP still retained institutional primacy, and Wilkins was heavily involved in lobbying for the far-reaching civil rights legislation that was enacted during those years. These federal laws were the culmination of the organizational effort begun with the founding of the NAACP in 1909. The legal barriers that forced African Americans into a subordinate legal status were finally eliminated. This was largely the result of the efforts of organizations such as the NAACP. Wilkins remained its executive director until his retirement in 1977. He died on September 8, 1981.

Leland Ware is the Louis L. Redding Chair for the Study of Law and Public Policy at the Joseph R. Biden, Jr. School of Public Policy and Administration, University of Delaware.